New Yorkers took on the real estate industry and won.

On Tuesday, Democratic lawmakers in Albany announced a sweeping package of rent reforms that will strengthen tenant protections statewide. Gov. Andrew Cuomo has agreed to sign the legislation, which will have a direct impact on the 2.4 million people living in rent-stabilized housing in New York City and the surrounding area, as well as millions more renters across the state. 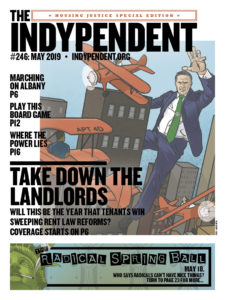 What’s more, the reforms will be permanent. Tenant advocates will no longer have to trek to the state capital every time New York’s rent laws are set to expire and plead their case against the monied interests of the landlord lobby — a foe that until now has put them on the defensive for decades.

A crucial turning point in the tenant victory came with a popular upsurge at the polls last year that lead to the defeat of lawmakers with the Independent Democratic Conference and a slew of their Republican allies, creating an opening for a freshman class of left-wing Democrats — including the likes of Sen. Jessica Ramos of Queens and the Brooklyn socialist senator, Julia Salazar — to go on the offensive. Backed by the Upstate Downstate Housing Alliance, a first-of-its-kind statewide coalition of tenant unions and community-based organizations, the populist Dems pushed their more conservative colleagues leftward, away from a real-estate industry that has buttered the bread of Democrat and Republican alike in Albany with millions of dollars in campaign contributions over the years.

Until Tuesday the question remained: how far was the Democratic leadership — Assembly Speaker Carl Heastie, Senate Majority Leader Andrea Stewart-Cousins and the governor — willing to go? The gradual but steady erosion of tenant protections in New York City and their nonexistence beyond the metro region has led to tens of thousands of evictions and vast chunks of affordable housing stock sinking like a melting iceberg onto the market. Millions of renters are barely floating by and approximately 90,000 people in New York State are homeless today — largely as a result of lawmakers historical kowtowing to the landlord lobby.

But would 2019 be different, would it be the year of the tenant?

While Salazar, Ramos and their statehouse allies dug their horsetrading heels in, tenant activists banded together and lobbied hard for reform. The Housing Alliance staged dozens of protests and sit-ins both in Albany and in lawmakers’ home districts. They knocked on their neighbors’ doors and urged them to call their representatives and demand the passing of a package of nine bills that together amounted to universal rent control.

The inside-outside strategy paid off. Tenant advocates didn’t get everything wanted but they got plenty, all while laying the groundwork for future reform.

Among the trophies they took home: the repeal of the vacancy bonus or, as some refer to it, the “eviction bonus” that granted landlords the right to start charging up to 20 percent more for rent-stabilized apartments every time they turned over to a new tenant. This gave landlords an incentive to try to force tenants out.

Another loophole, known as vacancy decontrol, enabled landlords to deregulate vacant rent-stabilized apartments entirely once their rent reached $2,733 or more a month. Vacancy decontrol led to 155,000 units of regulated housing stock going market rate after it was introduced in 1997 and would have meant the eventual deregulation of all rent-stabilized housing had it been allowed to continue. Lawmakers repealed this loophole too.

Under the reform package, the state will now inspect and audit building-wide improvements, to ensure inflated maintenance costs are not passed onto tenants. The Housing Alliance had sought to prevent landlords from passing any maintenance costs their properties incur on to tenants but Gov. Cuomo and New York Mayor Bill de Blasio objected, citing concerns it would discourage landlords from making repairs.

Lawmakers also agreed to end a practice misleadingly called “preferential rent.” Essentially a bait-and-switch, it allows landlords to hike rents by hundreds of dollars a month on rent-stabilized tenants if the initial lease charged below the maximum legal rent.

Only one of the nine bills on the tenant advocates’ checklist, and by far the most radical, was left on the floor. Introduced by Salazar, it would have mandated landlords statewide show “good cause” before initiating eviction proceedings or refusing to renew a lease and restricted excessive rent hikes.

Many of the reforms announced Tuesday address the erosion of the 1974 Emergency Tenant Protection Act which governs New York City and the inner suburbs of Nassau, Westchester and Rockland counties. But the package set to be signed into law by the end of the week includes a provision allowing municipalities across the state to establish rental protections of their own, which they were previously forbidden from doing.

“It seems to be that the democratic socialist wing of the Democratic Party is in full control of the state government,” Jay Martin, head of the Community Housing Improvement Program, a building owner’s trade group, told the New York Times. “I think this is the official declaration of that.”

Hoping this strategy will pay off again on another front, activists fighting mass incarceration have turned their sights to Queens, backing a young public defender, Tiffany Cabán, who has gone from longshot to possible favorite in her bid to be the borough’s next top prosecutor. We won’t know until the June 25 Democratic primary whether this growing progressive momentum is enough to carry Cabán to the Queens District Attorney’s Office, but one thing is certain: what once appeared far fetched doesn’t seem so anymore.

From the initial bid to unseat corporate-friendly Democrats by Julia Salazar and others to the fight for universal rent control to the current battle to flip the criminal justice system on its head in Queens, The Indy has been there all the way. Will you be there for The Indy? Donate or become a monthly sustainer today. And keep your finger on the pulse of this grassroots upsurge for social justice and get this vital resource delivered direct to your door every month.