In 2007, the New York Post ran a photograph of Debbie Almontaser on its front cover, describing her as a “sheik.” At the time, Almontaser was caught up in a controversy that soon blew over, but not before costing her her job as principal at the Khalil Gibran International Academy. Her resignation was in no small part thanks to the tabloid’s reporting, which accused her of running the Brooklyn-based, Arabic-language school as a kind of radical madrasa.

Flash forward to 2019: Almontaser now heads the Yemeni American Merchants Association (YAMA) and she says the Post has used its front page to attack the Muslim-American community again — this time, by placing an out-of-context quote from Minnesota Congresswoman Ilhan Omar, a practicing Muslim, over a photograph of the World Trade Center in flames.

“I was just absolutely outraged,” Almontaser tells The Indypendent.

While she and other Muslim Americans didn’t explicitly challenge the Post in 2007, they are this go around. Almontaser’s nephew, Mohammed Almontaser, and approximately 900 Yemeni-American bodega owners have banded together in an indefinite boycott of the publication.

Among their demands, as reported by Bklyner when the boycott kicked off in April: that the Post “change their cheap and sensational tabloids that undermine national unity and [incite] violence and hate for the sole purpose of circulation and sales against minority communities.”

“They’re very racist,” said Mohammed, 29, speaking with The Indy at Downtown Gourmet Deli, one of his four bodegas.

An analysis of the Post’s archives backs up both aunt and nephew. Sorting through thousands of articles published over the past five years, The Indy found that the Post was almost twice as likely to use words like “terrorist” or “extremist” when referring to Muslims rather than when referencing Christians. Forty-four percent of the Post’s articles with the word ‘Muslim’ also contained a variation on the word ‘terror,’ compared to just 16 percent with the word ‘Christian.’ 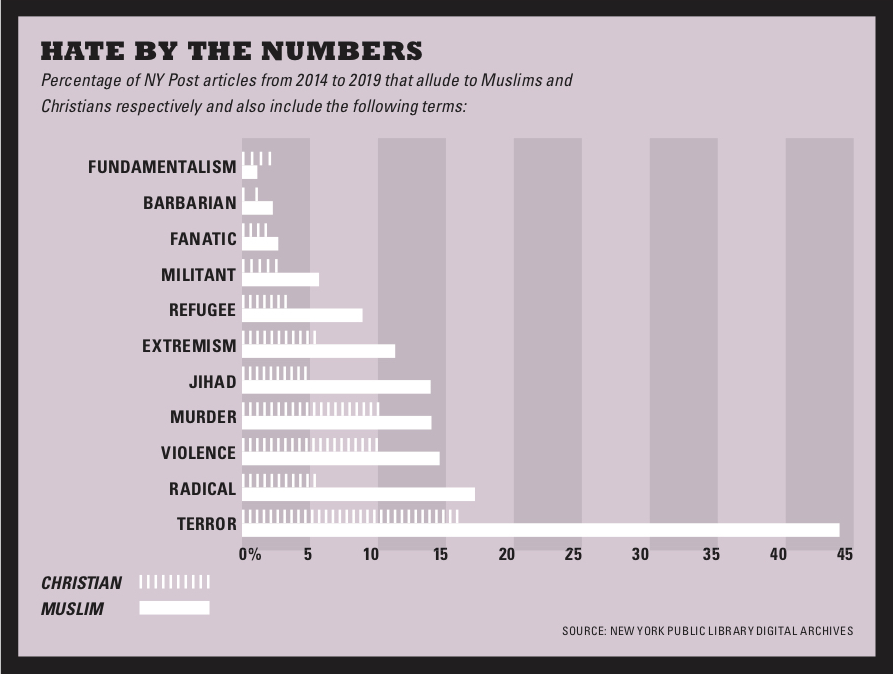 Almontaser isn’t taken aback. “The data just presented does not surprise me at all,” she said. “It’s what I and other activists and organizers across the country have been saying all along.”

A spokesperson for the Post declined to comment for this article. Nor are they speaking with the bodega owners. “We emailed them requesting a meeting. They never responded,” says Almontaser.

The publication’s lack of engagement has added fuel to the Yemeni-American boycott’s fire. What was planned as a limited 30-day affair has turned into a protest with no end in sight.

Despite the Post’s silence, the drop in revenue is probably getting their attention. With 900 stores currently participating in the boycott, Almontaser estimates the newspaper lost about $270,000 during the boycott’s first one month, based on the estimate that bodegas sell between 10 and 15 papers per day for $1 each and split the proceeds. The Post typically sells about 150,000 copies of its print edition a day.

Of the approximately 10,000 bodegas in New York City, 4,000 to 6,000 are Yemeni-American owned, so there’s plenty of room for the boycott to spread, explains Almontaser.

The effort to boycott the Post isn’t limited to the Yemeni-American community, either. YAMA has formed a coalition with Black Lives Matter’s New York chapter, Rise and Resist, the Council on American-Islamic Relations (CAIR) and other anti-hate groups. The organization is also reaching out to other ethnic groups in the city who sell newspapers to form a broader boycott, including the Bengali and Dominican bodega operators.

Her nephew, Mohammed, though, needs no more convincing. “I don’t want them in my store. I’m never gonna deal with them again.”