Protesters in more than 900 cities across the globe gathered on Friday evening for vigils initiated by the Lights for Liberty immigration coalition. With demonstrations spread over five continents, rally-goers called for an end to detention centers and the inhumane treatment of undocumented residents ahead of mass Immigration and Customs Enforcement (ICE) raids reportedly scheduled to begin Sunday.

Demonstrations must continue “until every detention camp and every person fleeing persecution is safe, and every single one of us is free,” Lights for Liberty co-founder Elizabeth Cronise McLaughlin told a crowd of more than a thousand in New York’s Foley Square on Friday.

Attendees in New York carried handwritten and printed signs that offered advice to non-citizens in the event of an ICE raid and decried the violence that children and black, brown and trans people encounter in ICE custody. The Foley Square rally, which took place beside one of the nation’s largest immigration courts at 26 Federal Plaza, began with chants of “No hate, no ICE, immigrants are welcome here.” Rev. Kaji Douša, senior pastor of the Park Avenue Christian Church in Manhattan, who recently filed a federal lawsuit with other activists last week after she was placed on a watch list for her work with migrant caravans traveling to the U.S.-Mexico border, MC’ed the gathering.

Miriam Martinez, a member of the social justice organization Make the Road NY, shared an emotional testimony about the detainment of her husband, Plutarco Garica with her three children standing by her side. The scheduled raids “show how little the administration cares about [me] and my family,” Martinez said in Spanish, with the daughter, Ashley Garcia, acting as interpreter. 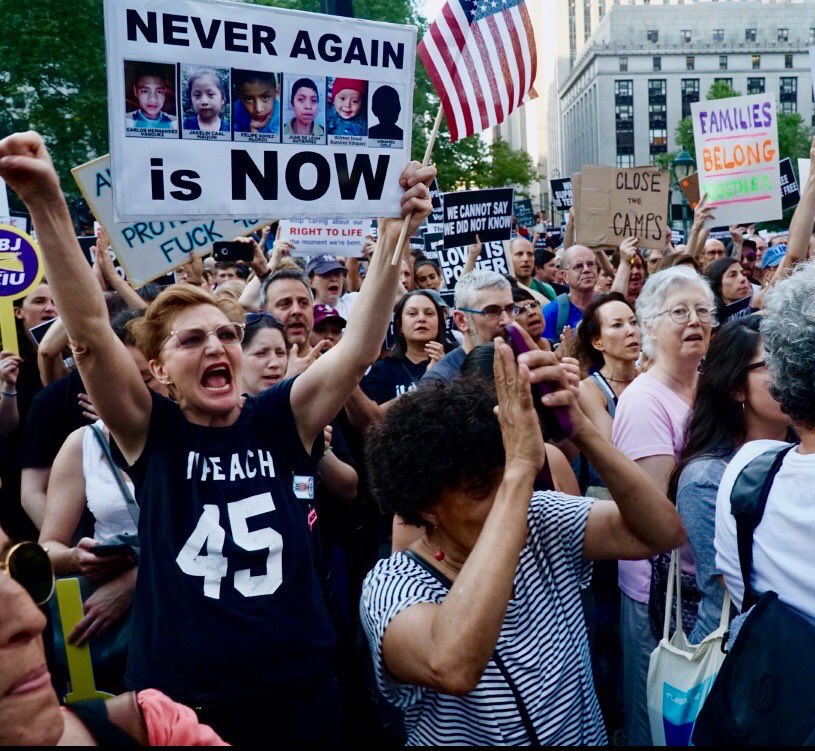 Other speakers recognized the violence that trans people have faced in their journeys to safety. A group of singers took to the stage and held a cross in honor of the trans people who have died in their quest for asylum, seeking “libertad como los pajáritos,” freedom like birds. Jesica Guaman, a trans woman from South America, spoke out against the horrific conditions and lack of treatment she and other trans people experience in detention centers. “We are not criminals,” she said. “We are only looking for freedom.”

New York congresspersons Yvette Clarke and Jerry Nadler also made appearances on stage, emphasizing their commitment to halting the Trump administration’s anti-immigrant policies. Rep. Nadler began by outlining the history of asylum laws passed after World War II, and the United States’ role in developing both domestic and international policies that grant all people fearing persecution and violence a right to seek asylum and be given a fair hearing.

“There is no place that it says if you apply for asylum under the laws, you should go to a detention center, you should go to a jail,” Nadler, who chairs the House Judiciary Committee, said. “That is beyond immoral, it’s illegal. And we have to fight that.”

Although reportedly scheduled to begin Sunday, ICE officers began arriving at homes in Harlem and Sunset Park on Saturday. According to Mayor Bill de Blasio, no arrests were made. Lights for Liberty speakers reminded citizens to report all ICE sightings. Emergency ICE raid watches were held in New York neighborhoods Sunday morning by New Sanctuary Coalition and other immigrants rights groups and will continue throughout the day.

A guide for citizens who encounter an ICE raid published by New Sanctuary urges observers to ask officers if they have a warrant, to film the exchange on their cellphones, and to report their presence using the group’s hotlines: 903-884-4357 or 908-791-5309. The organization also has a know-your-rights flier available for undocumented immigrants on its website.

As the vigil came to an end and the sky darkened of Friday evening, a wave of candles, glowing screens and burning wicks illuminated the square. Rev. Douša asked the crowd to turn toward 26 Federal Plaza and imagine the immigration court as a space of justice, possibility and promise.