The Indypendent
Menu
A Free Paper for Free People
The Park Slope intersection where Alex Santiago was killed as it looked about a decade ago.Source: Google Maps.

Thursday marks the nine-year anniversary of a brutally violent street fight on the usually placid streets of Park Slope. Just after midnight on Sunday, August 1, 2010, roughly twenty people clashed with crowbars and knives at the corner of 5th Avenue and 12th Street. Alex Santiago, a 22-year-old from Sunset Park, was stabbed to death and another man was knifed repeatedly but survived.

After an initial splash, the case stayed out of the headlines until 2013, when Brandon Santana, a suspect in the case, escaped custody at the 78th Precinct station house. Santana had reportedly been living in Iowa since the deadly incident.

Earlier this month the 2nd Appellate Division (AD) unanimously overturned the December 2015 conviction of Saul Robles, whom Santana identified as Santiago’s killer. In ordering a new trial for Robles (who had been serving a 22-year sentence), the AD strongly rebuked both Brooklyn judge Danny Chun and the prosecutor who handled the case.

The AD’s ruling uniquely illustrates the extent to which prosecutors will pursue a faulty case simply to secure a conviction. And it shows how judges are not exactly neutral players in the process.

Within the Brooklyn prosecutor’s office, Judge Chun is viewed as a member of the DA’s ‘team.’

In building the case against Robles, Brooklyn prosecutor Kori Medow* decided that Santana’s testimony alone would not be enough to win a conviction. As the AD ruling states, during the trial, Santana’s “veracity and credibility were questioned because he had lied to detectives and an assistant district attorney, absconded from a police station, and received an extremely favorable cooperation agreement in exchange for his testimony.”

Medow thus brought in a second witness in order to help erase any doubts the jury may have had regarding Santana. The problem is that this person had not identified Robles in two police lineups.

At one of the lineups, a police officer thus asked that witness which person she would “lean toward.” On the stand, Medow asked the witness, “What made you lean towards” Robles — and the reply was merely “the jaw.”

As the AD ruling states, Judge Chun should not have allowed that witness to testify. The fact that Chun did so is the basis for the AD’s decision to order a new trial.

Chun has sparked controversy over the last few years because of his handling of the Peter Liang and John Giuca cases. According to several former Brooklyn prosecutors, Chun is viewed within the office as a member of the DA’s “team.”

While it was Chun’s decision allowing Medow to put the shaky second witness on the stand that prompted Robles’ conviction to be overturned, the AD judges reserved their harshest words for Medow.

According to the AD ruling, Medow “engaged in multiple instances of inappropriate and unacceptable advocacy throughout her summation.” Since the prosecutor’s summation is last, it’s an advantageous time to smear the defendant.

In this case, Medow assured jurors that Robles was motivated by “machismo” and kept using phrases like “because he’s guilty” and “[b]ecause he committed the crimes.” She further declared that “it would require a lot of mental gymnastics to believe the defendant did not commit this crime.” The gratuitous comments caused the four appellate judges to “express strong disapproval of such conduct.”

Meanwhile, there was one other conviction in the 2010 street fight: Brandon Santana. In 2016, he received a favorable sentence of six-to-seven years for first-degree gang assault and escaping custody. Santana was paroled earlier this year.

Robles’ next court date is Wednesday when the DA’s office will announce its decision either to retry (which seems unlikely) or not retry him. Other options include an appeal of the AD’s ruling.

Since the 2015 trial, Medow has been promoted to her current position as deputy bureau chief of the Brooklyn DA office’s Orange Zone, which runs from Brownsville through Crown Heights to Park Slope.

Along with Cy Vance and the rest of his city counterparts, Eric Gonzalez supported the District Attorneys Association of New York’s (DAASNY) fight against the creation of a statewide prosecutorial misconduct commission last year. Although Governor Cuomo signed the legislation, it is currently stalled because of a DAASNY lawsuit.

How offices like Brooklyn will handle instances of misconduct is anyone’s guess. Regarding the AD’s criticisms of Medow’s conduct in the Robles decision, all that a familiar Gonzalez spokesperson would offer is “We are reviewing the decision.” 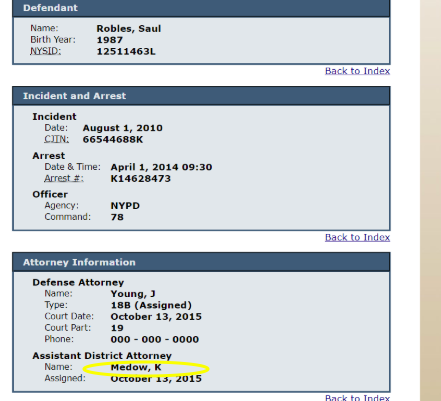 A screenshot of the state’s records in the Robles case listing Medow as assistant DA.