The Indypendent
Menu
A Free Paper for Free People
Demonstrators on their way to 212 Fifth Avenue to make a delivery at Jeff Bezos place. Photo: Sue Brisk.

Outside Amazon CEO Jeff Bezos recently-purchased Manhattan apartment, warehouse workers and immigration activists delivered more than 270,000 petitions calling on the online retailer to cut ties with Immigration and Customs Enforcement (ICE) and to stop is abusive labor practices. The demonstration was one of nine anti-Amazon protests that took place nationally, coinciding with the trillion-dollar company’s so-called “Prime Day,” where it offers customers steep discounts on the myriad items it sells, including everything from eyeliner to neo-Nazi paraphernalia.

After marching from Madison Square Park, protesters congregated outside the CEO’s residence at 212 Fifth Avenue, where they chanted “Bezos, Bezos, you can’t hide. We can see your greedy side.”

“We are delivering a message to Jeff Bezos,” said Daisy Chung, deputy director of the community-labor coalition ALIGN, “demanding that Jeff Bezos and Amazon cut their ties with ICE and stop belittling the human rights crisis that’s happening at the border and to respect their workers.”

The demonstration comes amid heightened tensions within immigrant communities, following threats of mass raids issued by the Trump White House.

In its mission to track down and deport undocumented Americans, ICE, a division of the Department of Homeland Security (DHS), uses software known as the Investigative Case Management system to integrate and mine data from troves of private and public records. MIT Technology Review refers to the software as the “backbone” of DHS and ICE’s key operations and all that data is stored on Amazon-owned servers.

Further, emails obtained last year through a Freedom of Information Act request by advocates with the Project on Government Oversight show that Amazon executives met with ICE officials last year, pitching them facial recognition software — technology that has been widely criticized for its inability to distinguish black and brown faces.

“We are ready and willing to support the vital [Homeland Security Investigations] mission,” a member of the Amazon Web Services team wrote to ICE officials.

“Amazon must be held accountable for its role in building ICE’s deportation machine and harming immigrant communities,” reads the petition, delivered by a trio of activists to the reception desk of Bezos’ apartment building after a brief negotiation with the NYPD.  “The corporation must immediately end all contracts and support for ICE and DHS.” 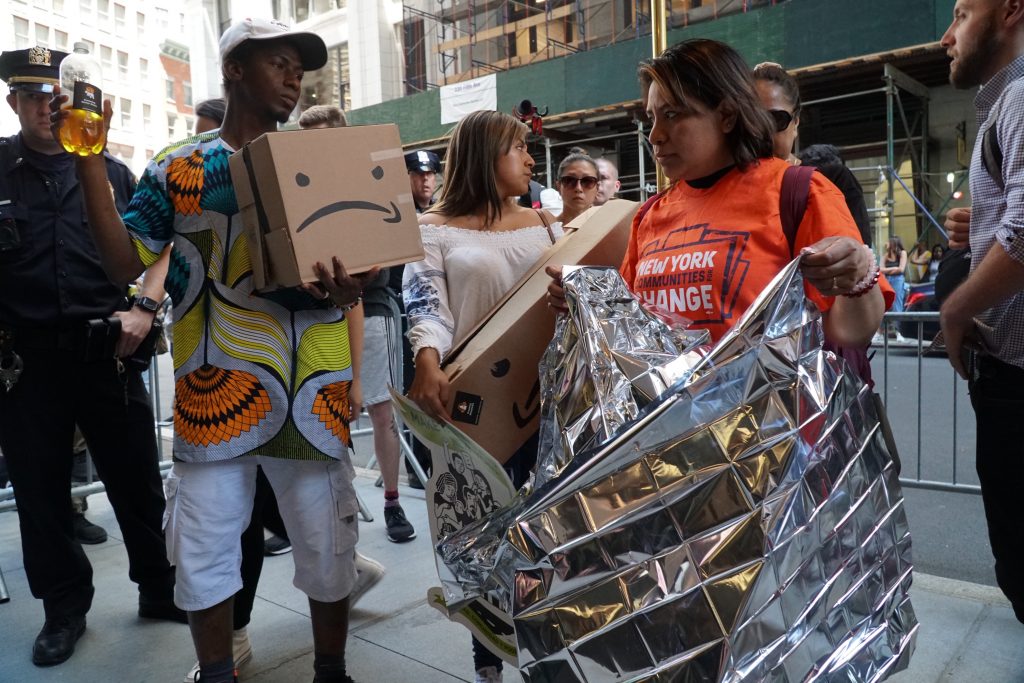 Demonstrators also called attention to working conditions at Amazon’s warehouses. Ibrahim Sangare said he worked for three months at an Amazon fulfillment center in Staten Island last year. He applied for the Amazon after arriving in New York from Africa, because $15-an-hour wage seemed to be a good opportunity. He described the warehouse, however, as a “modern plantation.”

“Amazon treats you like a slave working in inhumane conditions,” Sangare said. “You have to work 12 hours on your feet. In those 10 to 12 hours, you don’t have a break. You have a 15-minute break to go to the bathroom or to the break room. It’s not a joke. You don’t have time and you’re not allowed to talk to anybody.”

Sangare’s remarkers echo criticisms Amazon workers and labor activists have raised of the company in the United States as well as in Europe.

ALIGN’s Chung also noted that the New York protesters were “standing in solidarity” with Amazon warehouse workers in Minnesota who launched a six-hour strike on Monday. Anti-Amazon demonstrations were also held in Seattle, San Francisco, Washington, D.C. and other U.S. cities.

Zachary Lerner, a spokesperson for the social justice organization New York Communities of Change, told The Indy that the nationwide rallies would not stop with Prime Day.

“Our goal is to continue pushing Amazon and Jeff Bezos to do the right thing and actually support immigrant communities around the country,” Lerner said. “We will continue doing protests, actions and more to hold them accountable.”