The Indypendent
Menu
A Free Paper for Free People
Demonstrators confront cops near the home of the officer who killed Eric Garner on Wednesday.Photo: Sue Brisk.

It’s been five years since Eric Garner uttered his famous last words, “I can’t breathe,” and this city still hasn’t come up for air. It’s choking with rage, actually, a fury renewed by the Justice Department’s announcement Tuesday that it would not be seeking federal civil rights charges over the black father of six’s death.

Through rain, thunder and 90-degree heat that rage arrived on Wednesday beside the doorstep of the man who placed Garner in a fatal chokehold.

“We’re not going away, so you can forget that,” Garner’s mother, Gwen Carr, said the previous day, speaking at a press conference immediately following the Department of Justice’s announcement. “New Yorkers need to come out and flood this city tomorrow.”

That they did, first by filling Manhattan’s Foley Square and then with a separate march that wound through the streets of Staten Island. At times halting traffic, the march included a stop in front of 202 Bay Street, the strip mall where Garner was killed, and culminated in an elevated train ride to the home of Daniel Pantaleo, the white police officer captured on video choking Garner to death on July 17, 2014.

Speaking to The Indypendent at a small gathering earlier at 202 Bay Street, where friends and family celebrated Garner’s life, his former girlfriend, Jewel Miller, expressed contempt at the Justice Department’s decision not to pursue charges.

“It’s a slap in the face,” Miller, who gave birth to Garner’s youngest child, Legacy, three months before his death, said. “My daughter is five-years-old. July 17th is every day for me.” 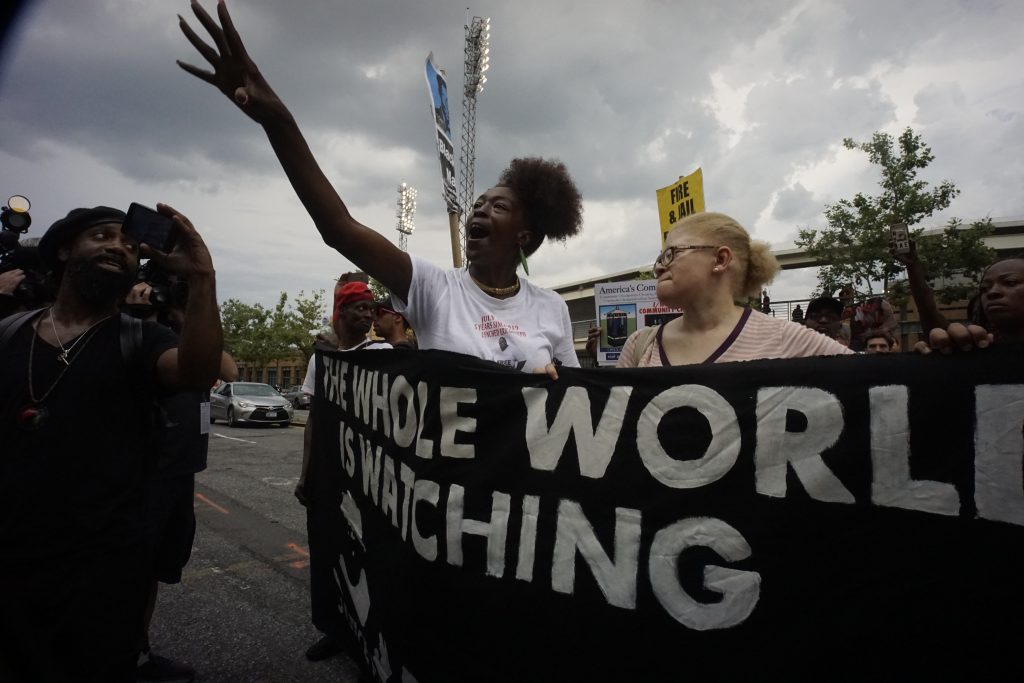 The city medical examiner ruled Garner’s death a homicide in 2014 but a Staten Island grand jury declined to indict Pantaleo. Over the objections of the Justice Department’s civil right’s division, Attorney General William Barr opted not to press charges at a federal level. Two of Barr’s predecessors who served under President Obama, Loretta Lynch and Eric Holder, also failed to raise a civil rights case. A disciplinary determination over Pantaleo’s future with the NYPD has dragged on and he remains in the department’s employment.

The mood at the Foley Square rally was tense. At one point protestors counted to 11, repeating “I can’t breathe” in the intervals, a phrase Garner uttered 11 times before losing consciousness. Police looked on as the demonstrators chanted “How do you spell racist? NYPD!” and made their way to the department’s headquarters at One Police Plaza, where the rally wrapped up.

Darian X, an organizer with the social justice organization Make the Road New York, noted that Pantaleo wasn’t the only member of the NYPD there for Garner’s death.

“There were more than 13 officers who were present and didn’t stop other officers from practicing illegal procedures or who were complicit in actually compressing Eric Garner that day,” X told The Indy. “Our central demand has been for the mayor and the NYPD to remove these officers.” 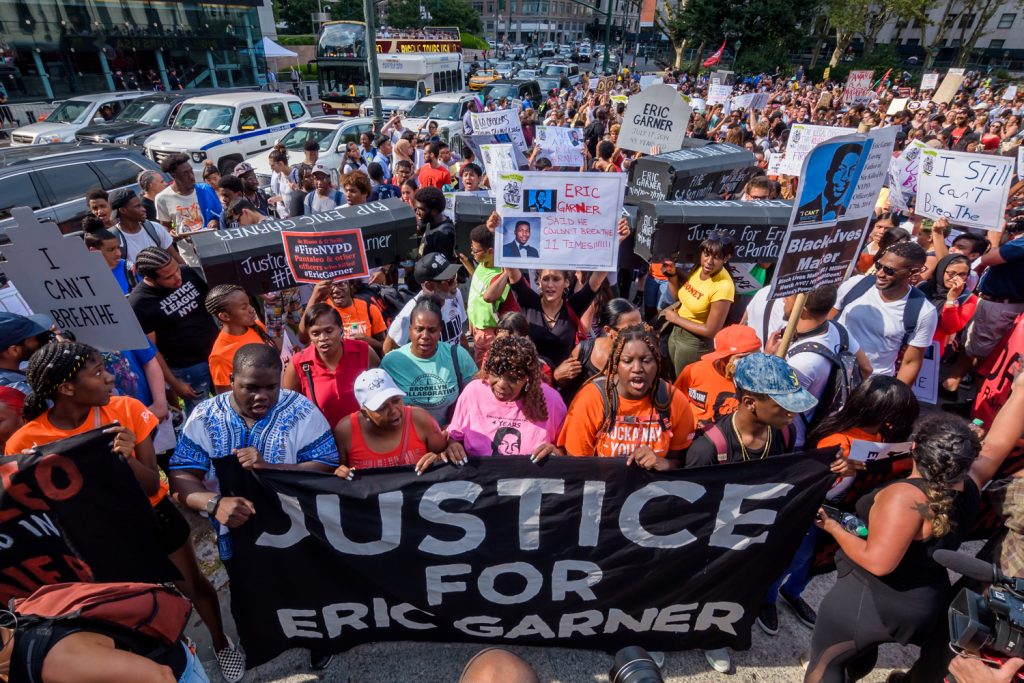 Led by the Garner family, demonstrators packed Foley Square on the five-year anniversary of his death. Photo: Erik McGregor.

The only person connected with Garner’s death to be imprisoned is Ramsey Orta, the man who filmed the fatal encounter. He is currently serving time on drug and weapons-related charges after being subjected to alleged police harassment.

In a remarkable scene later Wednesday evening, about 60 demonstrators calling for Pantaleo to be fired were greeted by a line of heavily-armored police blocking their passage to the cop’s home near the intersection of Oak Avenue and Elmira Street in the bedroom community of Oakwood Heights. An unrelenting rain turned the protesters’ signs to pulp but they continued chanting, “He needs to be scared every everywhere that he go! We will find you, Pantaleo!”

An NYPD disciplinary hearing that will determine whether Pantaleo keeps his job concluded this month but the administrative judge, Deputy Commissioner for Trials Rosemarie Maldonado, has not yet issued a ruling in the case. One of the many holdups in the delay-riddled proceedings came in May when the defense asked Maldonado for a recess so that Pantaleo could use one of his vacation days. Maldonado initially refused but eventually granted a two-day recess when Pantaleo’s lawyers couldn’t produce a witness they had called.

Critics say Bill de Blasio could be doing more to excerpt pressure on his police department to fire Pantaleo, but the mayor has so far bulked and emphasized the importance of due process. 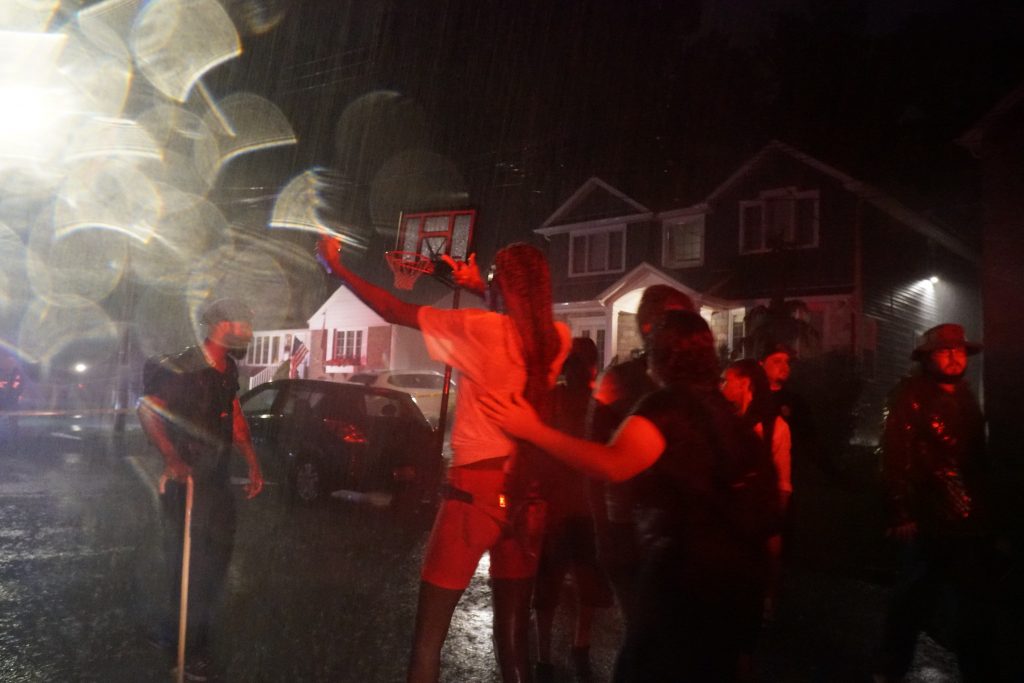 After a tense 20-minute standoff with police Wednesday, demonstrators relented and left the area surrounding Pantaleo’s residence, pledging to return.

Aaron Greenberg and Indy staff contributed to this article.