On Tuesday evening Washington Square Park became a sea of bodies and bicycles. Hundreds of cyclists and supporters lay silently on the ground along with their bikes for five minutes in an effort to draw attention to the surging number of cyclist deaths in New York City this year.

In 2018 the total number of cyclists killed on city roads dropped to a record low of 10. However, this year has seen 15 fatalities, a number which many transportation advocates are describing as an emergency. After the recent deaths of three New York City bikers in just one week, Transportation Alternatives and several other advocacy groups organized the “Bike Family Mass Die-in” in an effort to bring the community together to mourn the deaths of those killed and to vent their anger over the sudden spike in fallen cyclists.

“We want the city to treat this like the emergency it is and investigate why these crashes are happening and put fixes in place that will prevent them in the future,” Transportation Alternatives Deputy Director Ellen McDermott told The Indypendent after addressing the crowd. McDermott spoke of the “alarming rise” in the rate of fatalities and how organizers believe further deaths may be avoided.

“We want to see [the city] accelerate projects that are already in the pipeline for protected bike lanes,” McDermott said. “We want to see them take car parking away to create safer intersections for both cyclists and pedestrians. We want to see them build out the bike share network because there is a really pronounced safety in numbers effect: the more people on bikes the safer it is for everyone,”.

McDermott noted the city is now in the process of formulating an emergency plan that will be overseen byTransportation Commissioner Polly Trottenberg. The specifics of the “cycling safety plan” are yet to be announced, but will include expanded cycling infrastructure, policy changes and increased public awareness programs. 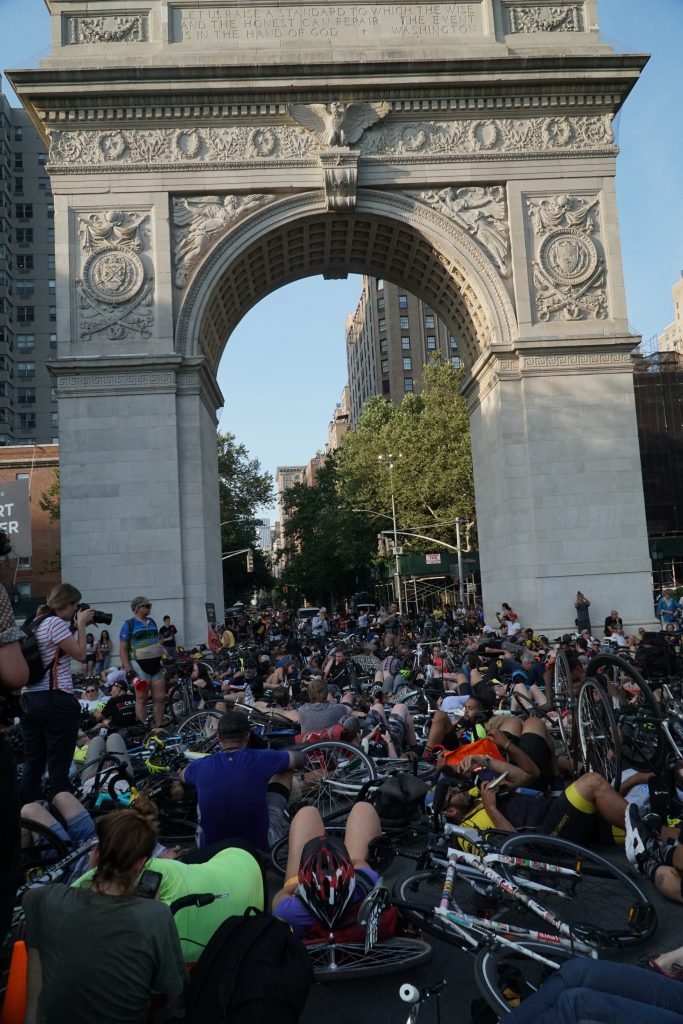 Upon taking office in 2014, Mayor Bill de Blasio announced Vision Zero, a plan to end traffic deaths by 2024 by systematically redesigning streets and dangerous intersections, and by cracking down on dangerous driving in the city. While McDermott praised Vision Zero’s initial conception as a “revolutionary idea,” she now thinks that the policy may have “hit a plateau.”

“The point of Vision Zero is to react and analyze the situation on the ground, figure out what is happening and how to make changes as necessary. We really hope this is a moment that the city will reflect on what’s working, what’s not working and redouble their efforts to really create Vision Zero into the amazing program that it is,” McDermott said.

Some participants in Tuesday’s rally were more pointed in their criticisms of de Blasio, holding signs that read “De Blasio to cyclists: DROP DEAD.”

“What do I think of Vision Zero?” said Nina Sabghir, a member of Families for Safe Streets who joined the group after she was seriously injured in a 2015 collision with a vehicle while on her bicycle. “I would say it’s zero vision.”

Sabghir expressed frustration over police harassment of bikers in the city, a frustration shared by many at Tuesday’s event. Conflicts between protesters and police broke out outside of Washington Square Park after cyclists rode on Fifth Avenue, temporarily blocking traffic. Many protesters were still angry following another incident on Saturday where a squad car was used as a battering ram to halt a cyclist in the East Village who allegedly ran several red lights.

The tensions between New York City bikers and police were addressed prior to the die-in by James O’Neil at a Monday press conference. He insisted police were “looking to keep cyclists safe” and that the 15 deaths were a “concern” him and to the NYPD.

This did little to appease cyclists.

“We know that there are cities all over the world that have really changed the culture and traffic conditions, they changed the whole transportation mode,” Sabghir said. Cities like Amsterdam and Copenhagen have revamped their city streets to favor the safety of cyclists and pedestrians over the whims of car owners.

“I biked in Amsterdam in the 1970s and I can tell you that the Amsterdam you see now, is not the Amsterdam that you saw then,” Sabghir said. “It took will, it took conviction, it took courage [but] they redesigned the streets. They made it so some streets have no cars at all, or limited the amount of traffic. It can be done in New York City as well.”

The die-in closed with the crowd repeating after McDermott an elegy that conveyed their heartache over the loss of life and the desire for change: “We are here for every single person that has been injured or maimed on our streets. We are united in grief. We are united in anger. Mayor de Blasio, we demand protection.”