The words, stitched in black, glare out from the center of a handkerchief, decorated with a motif of pink roses: “Oh, my God. This is terrible. This is the end of my Presidency. I’m fucked.”

The stark contrast of the language and the visual aesthetic encourage the sort of cognitive dissonance that is now commonplace in American political consciousness. Looking at the kerchief, one could imagine blowing one’s nose comfortably into the cotton cloth, covering the embedded “presidency” in snot.

This hand-sewn phrase, and thousands of others like it, line the walls of Lingua Franca, a compact shop in Manhattan’s West Village dedicated to embroidery that has been temporarily converted into an optical echo chamber of Donald Trump quotes, his words fashioned to textiles of varying styles. It’s all part of “Tiny Pricks,” a public art project created and curated by artist Diana Weymar.

“I feel that Trump’s words are like pricks. I mean, I feel poked and pricked,” Weymar tells The Indypendent. “This project is trying to reverse that.”

Weymar’s own creations make up only a small portion of the display, with the majority of the works being submissions from people all across the United States. Through Instagram (@tinypricksproject), a series of workshops and now via this traveling exhibition, thousands of people have joined the project.

‘If we had to stitch everything that we said, we’d all be much nicer people.’

Participants pick a quote from the president, sew it and mail their work to Weymar, who finds a space for each amidst the growing assemblage.

For Weymar, it’s a way of creating a space for reflection, the act of stitching calms her. “I find that my mind slows down, that my language slows down,” she says. “I think if we had to stitch everything that we said we’d all be much nicer people.”

With over 33,000 followers on Instagram and daily posts that consistently receive over a thousand likes, Weymar’s concept is resonating. There’s a collective thread tying all these people together: a shared desire to process the presidency and, more specifically, to process the language deployed by the prick in the White House.

This need for reflection is understandable. According to the Washington Post’s calculations, the president has so far made over 10,000 false or misleading statements. Beyond the falsehoods, there’s also the unparalleled absurdity of so much of what Trump has put out there. There’s his infamous “grab them by the pussy” quip, in addition to many other inflammatory remarks, but there are also downright bizarre phrases, such as “The kidney has a very special place in the heart” and “I am a very stable genius.”

The “stable genius” comment was the first Weymar documented. Using her grandmother’s needlework kit from the 1960s, she sewed the letters with yellow thread over a print of red and purple florals. The finished product and the multitude of responses it received on Instagram served as the catalyst for “Tiny Pricks.” Weymar set out to create one piece a week, though with the ongoing onslaught of Trump’s ridiculous comments on Twitter and in the media, she began producing more often and enlisting others, hosting workshops for her friends and with the public.

Now she hopes to have 2,020 submissions logged by 2020, when the next presidential election will start to heat up, and to display the needle works in swing states.

“This project has been a call and response,” Weymar says. “The next step is to move it into a more political realm, to really use it as a tool to draw attention and awareness to the language that has come out of this presidency.” 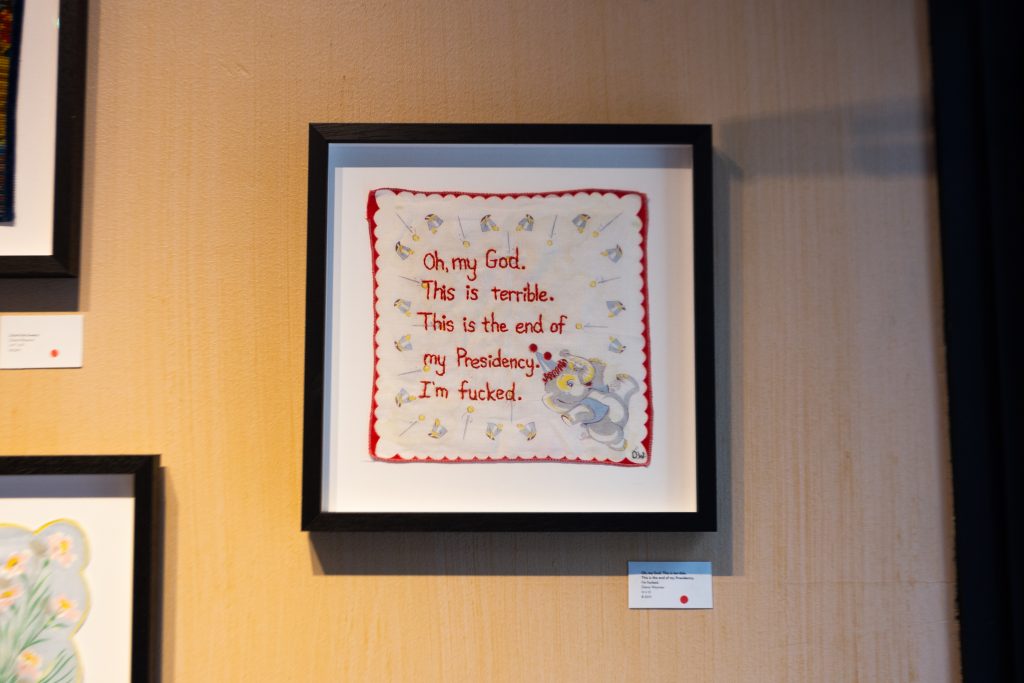 Weymar recently revisited the “stable genius” quote that started the ongoing textile protest, posting her updated version to her Instagram on July 19, the date marking 18 months since the original went viral. The updated take on the quote is sewn on burlap and decorated with colorful mushrooms. The choice to depict fungi, hinting at psychedelia, suggests the statement is hallucinatory, rather than that of a stable person.

This revisit feels more explicit than the original, the needlework more steady. Weymar accompanied the post containing it with the hashtag #DelusionsOfGenius. It’s an indication that “Tiny Pricks’” foray into more blatant political messaging will be bold while maintaining a sense for the kitsch and the cute. Weymar’s growing army of seamstresses are wielding their needles like so many tiny swords — and pricking back.