The Indypendent
Menu
A Free Paper for Free People
Migrants rescued by the Italian Red Cross in the Mediterranean Sea in 2016 prior to a crack down on such missions. Credit: Yara Nardi/Italian Red Cross.

“Everyone was so scared on the boat,” says Bokretsion Gebrekidan, a 39-year-old Eritrean asylum seeker, recounting his journey from Libya to the shores of Malta six years ago.

“The heat was unbearable,” he continues. “When you looked up it was only the sky, and when you looked down you could only see the sea. It was terrifying. People were crying and praying. No one slept for the whole three days we were at sea.”

The wooden fishing boat that held Gebrekidan and about 300 other migrants and asylum seekers from North and Central Africa broke down. Its engine stopped working. They were attempting to reach Italy, but were rescued by the Maltese coast guard and taken instead to a detention center in the small island nation about 50 miles off the coast of Sicily.

Gebrekidan was one of the lucky ones. The trip across the Mediterranean is a life-threatening journey for most of those who depart from Libya. An estimated 2,275 migrants and refugees perished at sea in 2018, an average of six deaths per day, according to the UN Refugee Agency. So far this year, the International Organization for Migration (IOM) has recorded at least 840 deaths in the Mediterranean.

Those who survive are not given a warm welcome in Malta. Greek, Roman, Arab and French cultures have left their mark on the former British colony, which exists as a crossroad between Africa and Europe. But despite its multicultural history, the island nation is giving its latest arrivals a chilly reception. The country is at the front gate of a Europe that has cooled to an influx of refugees who are fleeing war, famine and privation by the thousand, and where, as in America, a far-right preaching iron-clad borders in response to a humanitarian crisis has gained political traction.

A State of Limbo

Gebrekidan, like most asylum seekers in Malta, was granted “subsidiary protection,” a status of sub-citizenship he must renew each year. At least 485 asylum seekers were granted subsidiary protection in 2018 and are living in a state of legal limbo. Although most would face serious harm if returned to their countries of origin, they are not recognized as refugees and therefore have no path to citizenship.

This also means that they are not afforded the right of family reunification, leaving them separated from their loved ones indefinitely. Unless they are resettled to another EU or non-EU member state, their subsidiary protection status can be revoked should their native land be deemed safe. 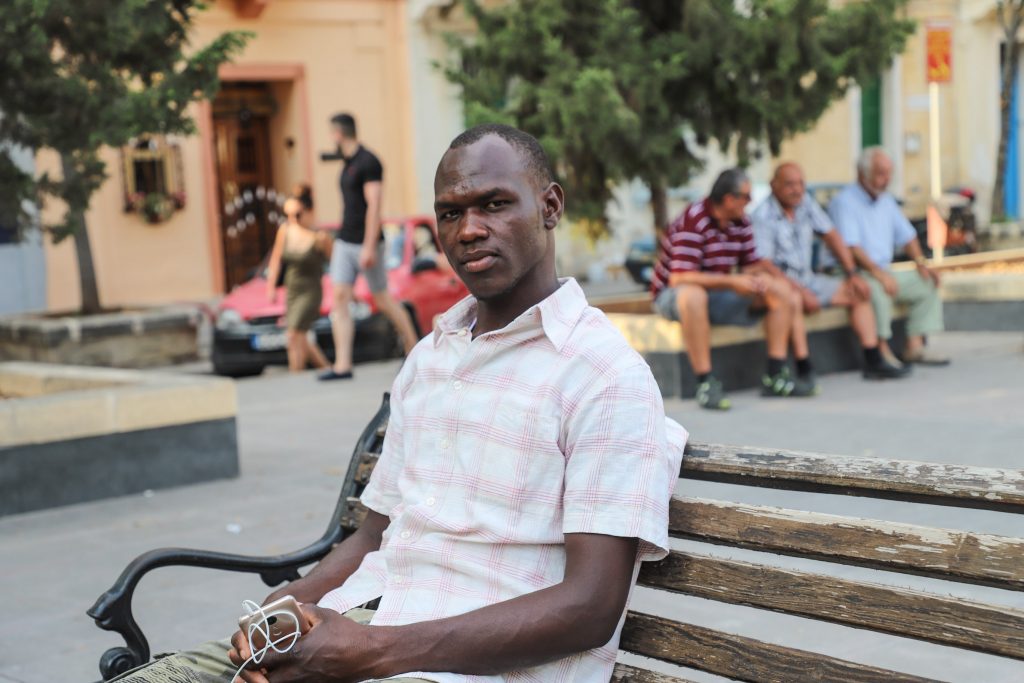 Sudanese asylum-seeker Shazali al-Nour was held for weeks in a Libyan prison before escaping to Malta. Photo: Jaclynn Ashly

Like Gebrekidan, 35-year-old Major Sium, fled Eritrea, often referred to as the “North Korea of Africa,” after finding himself a target of President Isaias Afwerki’s regime. Both say their residency status means occupying a state of constant uncertainty.

“We are basically invisible,” Sium told The Indypendent. “We are always worried. We see people who have been here for 10 years and are still separated from their families.”

Despite living, working and paying taxes in Malta for at least six years — and most likely continuing to do so for the foreseeable future — Sium has no route to permanent residency or citizenship and receives no pension benefits.

Between 2014 and 2017, the United States was the only country resettling refugees from Malta and in the decade prior to Donald Trump’s election took in more than 3,000 people. Upon taking office, President Trump froze the resettlement program.

“Now what?” he said. “We just wait in Malta until they decide to deport us back to our country? We can’t live a normal life here. Most of us can’t get married because we don’t know what will happen to us in the future. I have no idea what will happen to me.”

Akram Jrerah, a 57-year-old asylum seeker from the city of As-Suwayda in Syria — one of the countries listed in Trump’s 2017 Muslim travel ban — arrived in Malta on a visa in 2011, a few months after the Syrian revolution broke out, fearing himself a target of forces loyal to Bashar al-Assad. Two years later, his wife and daughters, ages 11 and 12, traveled to Libya and attempted to make the dangerous journey across the Mediterranean to reunite with him. Soon after setting off their boat was forced to return to Libyan shores, unable to withstand the waves. Deeming the journey too dangerous, his wife and daughters returned to Syria.

His wife has since divorced him.

“It was impossible to get them here, so she wanted to move on with her life,” Jrerah said — his story a typical one among asylum seekers here.

Mazelo Gebrezgabhier, a 30-year-old Eritrean who arrived in Malta by boat in 2016, says that his wife back home filed for divorce following Trump’s freezing of the U.S. refugee program.

“She’s been waiting for almost four years and we have no idea if it will be another four years or maybe ten years before we can be reunited,” he said. “That’s not a life.”

Nowhere Else to Go

Migrant boat arrivals were on the decline here, with just 23 migrants disembarking on Maltese territory in 2017, according to the U.N. Refugee Agency. But since Italian Interior Minister Matteo Salvini took office in June 2018 making closing off Italian ports and immigration centers the cornerstone of his far-right policies, Malta has seen a sharp uptick. There were nearly 1,500 arrivals during the second half of last year and so far in 2019 1,583 migrants have landed on Maltese shores.

Meanwhile, the Libyan Coast Guard, which receives training and funds from the EU to intercept migrant boats leaving its shores, returned 85 percent of migrants rescued to Libya in 2018. Many refugees are placed in closed detention where they face limited access to food and are vulnerable to disease.

Last month, the Tajoura detention center on the outskirts of Tripoli was hit in two airstrikes, killing at least 44 detained migrants and severely injuring at least 130. Following the attack, the U.N. demanded the closure of the detention centers and the release of the refugees. Despite these demands, the survivors of a migrant shipwreck last month — considered to be “the worst Mediterranean tragedy this year” with up to 150 migrants believed dead at sea — were transferred to Tajoura, in a move Doctors Without Borders called “unimaginable.”

The EU’s decision in March to pullback naval patrols in the Mediterranean, which have rescued tens of thousands of people since they began in 2015, coupled with Italy’s criminalization of NGO-led search-and-rescue missions, have added to the dangers of crossing the Mediterranean.

Malta officially ended its practice of automatic detention for migrants in 2015 following an outcry by advocacy groups and an EU court ruling that deemed it a violation of human rights. The country’s current policies mandate that arrivals be transferred to “Initial Reception Centers” (IRCs) where they undergo health screenings and age assessments before being released into what are called “open centers,” where migrants can come and go as they please, but outsiders are restricted from entering. Conditions in both types of facilities have been widely condemned as deplorable by rights groups.

Dominik Kalweit, deputy executive director of the Malta-based NGO Kopin, notes that Malta’s Agency for the Welfare of Asylum Seekers (AWAS), has not yet managed to increase its capacity or provide adequate human resources and staff training. The open centers, some of which are mere mobile metal containers, are in “dire need of refurbishment and upgrading,” he said, though he is hopeful because AWAS has assured him it is working on plans to implement infrastructural amendments.

AWAS did not reply to The Indy’s request for comment.

Meanwhile, automatic detentions have continued under a different guise. Migrants and asylum seekers are only supposed to be kept in the closed IRC facilities for a maximum of 14 days. However, in reality, many migrants have reported being held for several months. According to Marc Tilley, an NGO advisor based in Malta, the country has also re-implemented automatic detention for specific nationalities, particularly North African men, mainly from Morocco and Algeria. 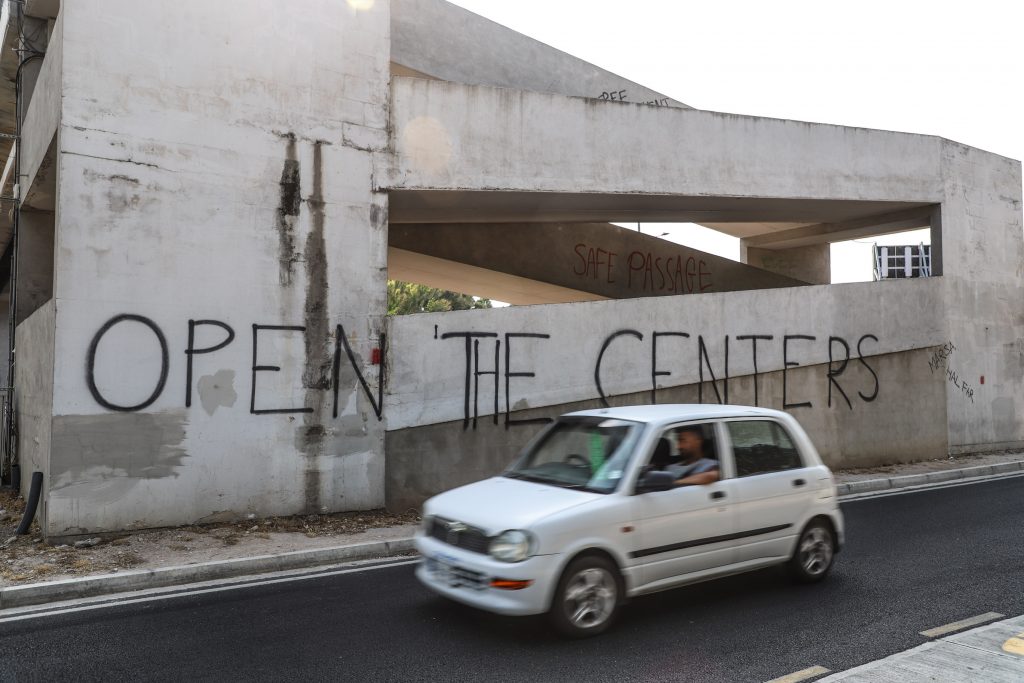 “What we know is that certain ethnic groups are being profiled and being put into detention.” If you’re a young North African man “you’ll be taken straight to Safi and put straight into detention,” Tilley said, using the name for a local prison housing migrants at risk of deportation.

Tilley accuses Malta of practicing “collective asylum rejections” based on a migrants’ nationalities, a practice which is illegal. Last year, Malta deported almost 600 migrants, the majority of them hailing from North African nations.

Shazali al-Nour, a 25-year-old asylum seeker from eastern Darfur in Sudan, fled violence in his village after his two uncles and two brothers were killed. “I couldn’t live there anymore.” he said “I felt like any day I could lose my life.”

He left Sudan for Libya but never thought of attempting the perilous journey to European shores until he got into an argument with his Libyan boss who refused to pay him for months of work. His employer called the police, who threw al-Nour in jail. Two-and-a-half months later, he was able to escape by squeezing through a small opening in a bathroom. He boarded a Europe-bound vessel with about 100 other migrants from Sudan and Bangladesh.

“I was scared to get on the boat,” al-Nour said. “But my situation in Libya was so difficult. Both options were horrible, so I had to choose one of them.”

Upon his arrival to Malta in October last year, al-Nour was placed in an IRC for a month. “It was like being in a prison,” he recalls. “You can’t leave. You just eat and sleep — nothing else. I had no idea how long I would be there. No one provided us any information.”

A recent report by the Asylum Information Database lists the NGO’s concerns over Malta’s reception centers: “low hygiene levels, severe overcrowding, [a] lack of physical security, [the] location of most centers in a remote area of Malta, poor material structures and occasional infestation of rats and cockroaches.”

Al-Nour was eventually transferred to the Hal Far Open Centre, where he stayed for two months before finding independent housing and a job at a bakery. He is waiting to find out if he will be granted subsidiary protection by the state. The protection status means he will escape the fate that befell his uncles and brothers, but it also means he will be trapped within in the same legal limbo that governs the lives of so many refugees on the island.

Calmer seas during the summer months mean an increase in new arrivals like al-Nour. The numbers of those seeking asylum will likely surpass those of the previous year. Fleeing destitution and violence, they just keep coming.