For 250 issues The Indy has been a bold, progressive newspaper and website that provides a unique voice in the NYC media landscape. Here are some of the highlights from our journey so far.

We’ve published 250 issues of The Indy because of the generous support of readers like yourself. However, our financial challenges have never been greater. Make a one-time gift today or become a recurring monthly donor. 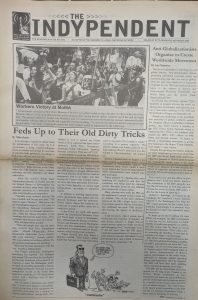 Inspired by the Nov. 1999 Battle of Seattle and a subsequent wave of anti-corporate protests that rippled around the world, The Indypendent launches as a four-page, black-and-white newspaper dedicated to covering radical social movements in NYC and beyond. It is a part of Indymedia, a global network of grassroots media projects that flourished in the early 2000s, hence the “y” in our name. 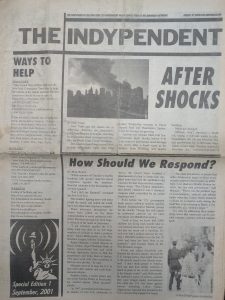 The Indy publishes a four-page special issue within 48 hours of the 9/11 attacks and another 12-page special issue a week later. As the Bush administration rushes to exploit public rage and fear following 9/11, The Indy becomes a magnet for New Yorkers who are alarmed by where the country is headed. 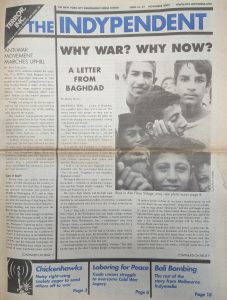 A who’s who of leading Democrats including Hillary Clinton and Joe Biden can’t figure it out. But four months before the United States invades Iraq, The Indy publishes a special issue titled “Why War? Why Now?” The issue debunks official rationales for war, offers a first-hand glimpse into the lives of ordinary Iraqis, and covers the growing antiwar movement. A two-page center spread highlights dozens of sites in the United States where weapons of mass destruction are developed and produced. 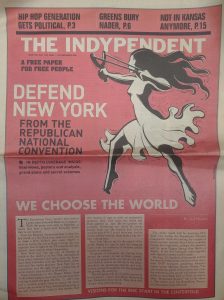 While corporate media push unsubstantiated scare stories about protesters and terrorists besieging New York during the upcoming Republican National Convention, The Indy trumpets the rights of dissenters and reports on the myriad reasons they are taking to the streets. Two August issues have print runs of 100,000 and 150,000, the largest circulation in decades for a radical, grassroots newspaper. 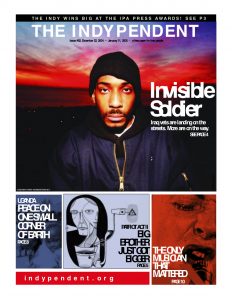 John Tarleton profiles Harold Noel, a Brooklyn-born Iraq War vet who finds himself fighting mental illness and sleeping outside at the onset of winter while his family falls apart around him. Noel’s story is subsequently picked up by a number of national outlets. Noel tells The Indy, “I walk around crying every day. I feel lost in my own land; the land I fought for … Sometimes I just feel like picking up a gun and calling it quits … But, something’s got to get better. I didn’t just risk my life for nothing. There’s a God out there — somewhere.” A month later, an anonymous donor puts up $18,500 to cover a year’s rent for a three-bedroom apartment in the Bronx for Noel, his wife and three kids. 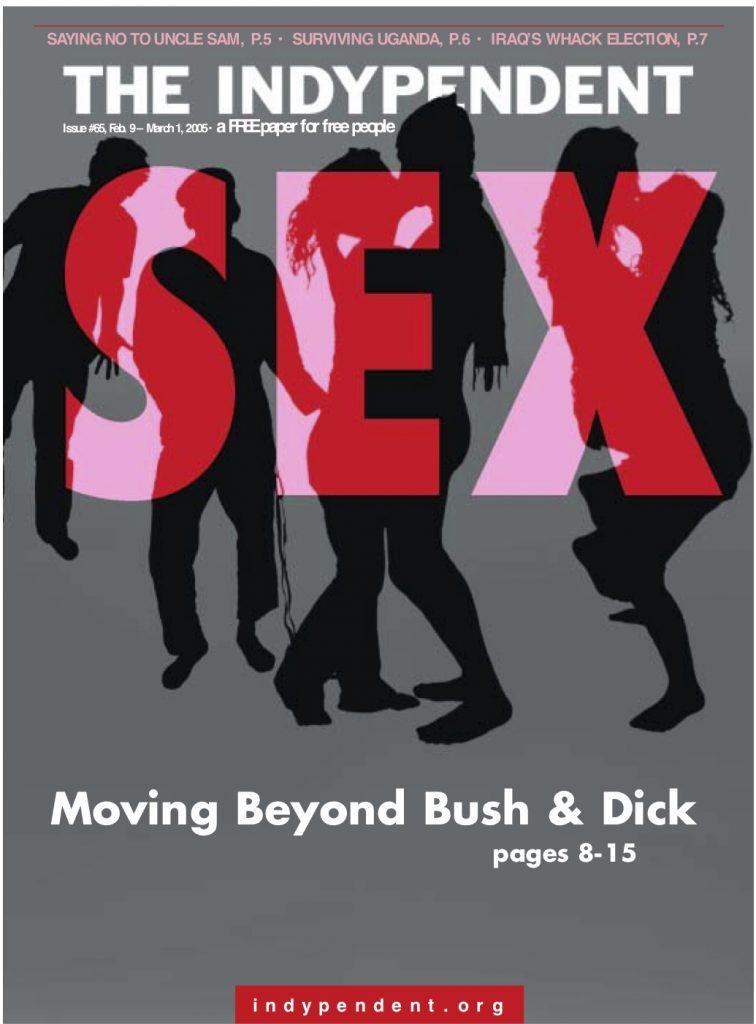 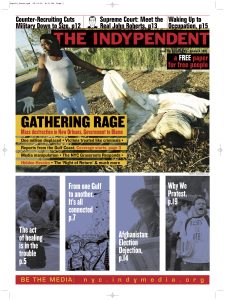 The Indy publishes a post-Katrina special issue that looks at the blatant disregard for Black lives in the response of the government and the corporate media as well as the hidden heroics of people coming to each other’s aid. “I’m in the Algiers neighborhood of New Orleans, the only part that isn’t flooded,” writes former New Orleans Black Panther and community organizer Malik Rahim. “The water is good. Our parks and schools could easily hold 40,000 people and they’re not using any of it. This is criminal. People are dying for no other reason than the lack of organization.” 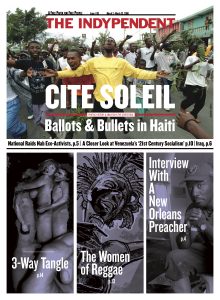 Photojournalist Andrew Stern spends a month living in Cité Soleil, Haiti, in the run-up to the country’s first elections since former President Jean-Bertrand Aristide was toppled in a 2004 U.S.-backed coup. Stern’s photo essay captures the spirit of a sprawling urban slum on the edge of Haiti’s capital city, where repression by and resistance to foreign troops is a part of daily life. 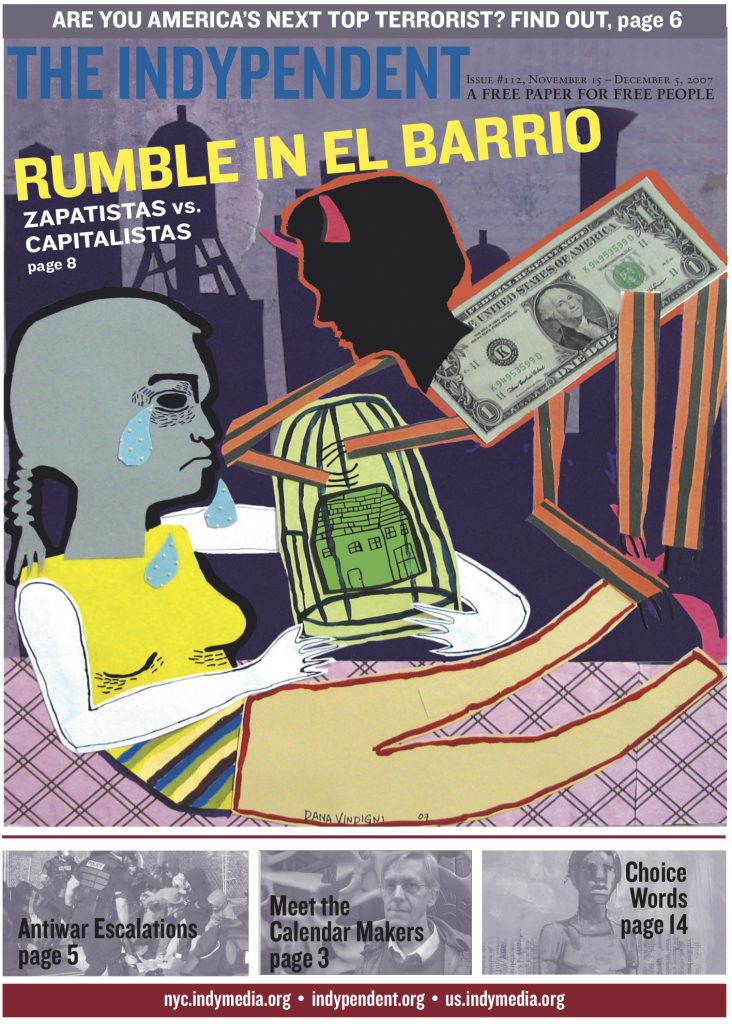 When the House of Representatives approves the Violent Radicalization and Homegrown Terrorism Act by a vote of 400–6, it seems a sure bet that the measure will sail through the Senate and be signed by President George W. Bush. However, when Jessica Lee’s reporting reveals how the legislation could be used by the government to target people engaged in First Amendment-protected activity and traditional forms of nonviolent civil disobedience, a firestorm of criticism ensues from activists and civil libertarians across the political spectrum. The legislation subsequently dies in the Senate. Lee would later win a Project Censored award for writing one of the 10 most important under-reported domestic news stories of that year. 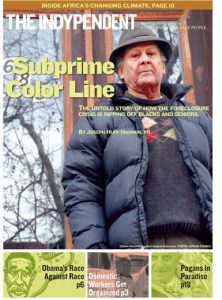 Using the story of a dementia-afflicted, 86-year-old homeowner in Crown Heights as a starting point, Joseph Huff-Hannon does a deep dive into the predatory practices of sub-prime mortgage lenders in neighborhoods like Crown Heights and Bed-Stuy. “If the housing market falls precipitously here as it has across much of the nation,” Huff-Hannon warns, “a cascade of foreclosures is likely to follow. An alarming number of those losing their homes will likely be black seniors.” 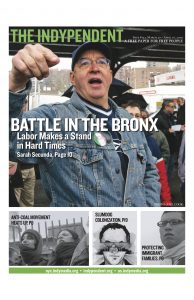 Sarah Secunda captures the zeitgeist of the Great Recession in her coverage of striking immigrant workers at the Stella D’oro bakery in the Bronx who find themselves locked in a bitter labor battle against a private equity company demanding deep cuts in pay and benefits. 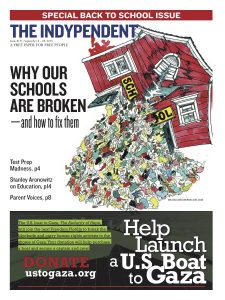 In a special back-to-school issue of The Indy, we hear from activist parents, teachers, students and radical education scholars on the pitfalls of corporate school reform, overreliance on standardized testing, the importance of teachers unions and the misuse of “gifted and talented” programs to maintain a system of de facto segregation in New York City’s public schools. 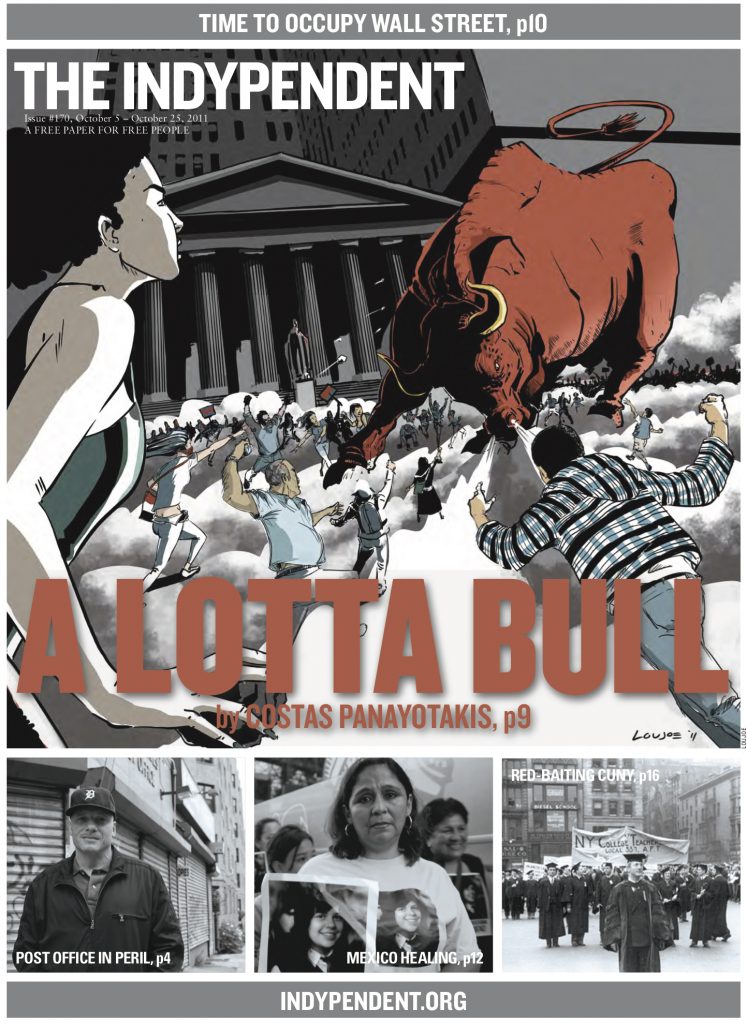 The Indy publishes three special issues during Occupy Wall Street and its immediate aftermath. Coverage ranges from photo essays and first-person pieces to analysis of the relationship between Occupy and labor unions, the police and the 99% and why taking over public squares in major global cities is such a powerful tactic. 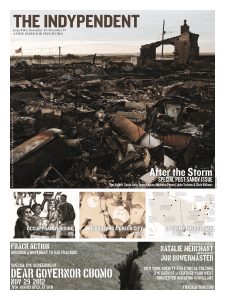 We publish a 20-page, post-Sandy special edition that includes latest news on relief efforts and how to get involved, a look at the real estate industry’s drive to build on the waterfront and a deep-dive (so to speak) piece on the impact of rising ocean levels over the coming centuries. 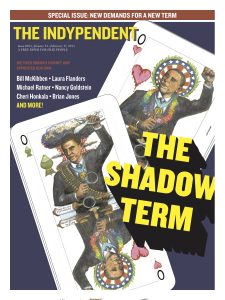 As Barack Obama begins his second term as president, The Indy appoints a Shadow Cabinet of visionary thinkers and doers. Each Shadow Cabinet member writes a short essay about what she or he would do upon taking office. Shadow Cabinet appointees include Secretary of State Laura Flanders, Attorney General Michael Ratner and Secretary of Energy Bill McKibben, who titles his article “One Thing Before I’m Fired.” 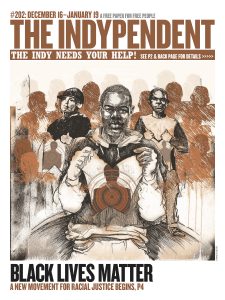 After protests erupt across the nation in response to the non-indictments of police officers who killed Michael Brown and Eric Garner, Nicholas Powers writes in The Indy, “We show our hands because we’re scared of being killed by officers who have been given license to kill Black people and go unpunished. I’m asking you to take this weight from us. I’m asking you to hold your hands up too.” 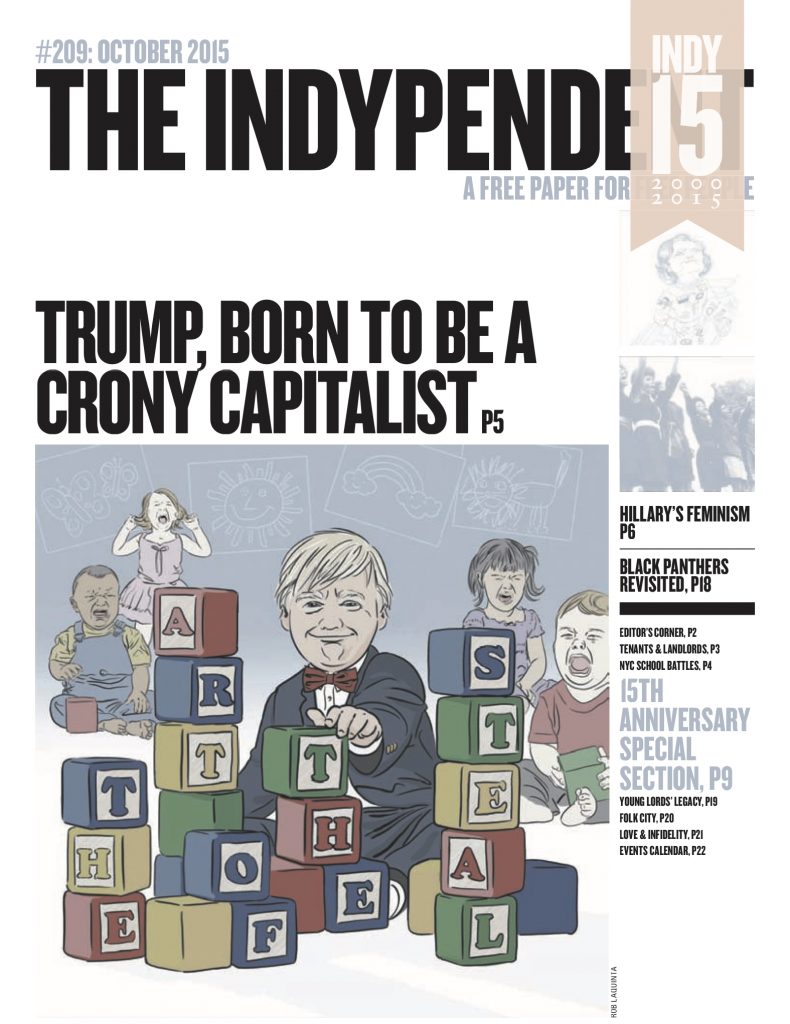 Soon after Donald Trump jumps to the front of the Republican primary field, The Indy runs a cover story on Trump’s career as a crony capitalist. While many pundits at the time assume Trump’s buffoonish campaign will soon flameout, the piece’s author Peter Rugh warns that former reality TV star can very well win the White House and if he does “President Trump” will morph into King Donald I. 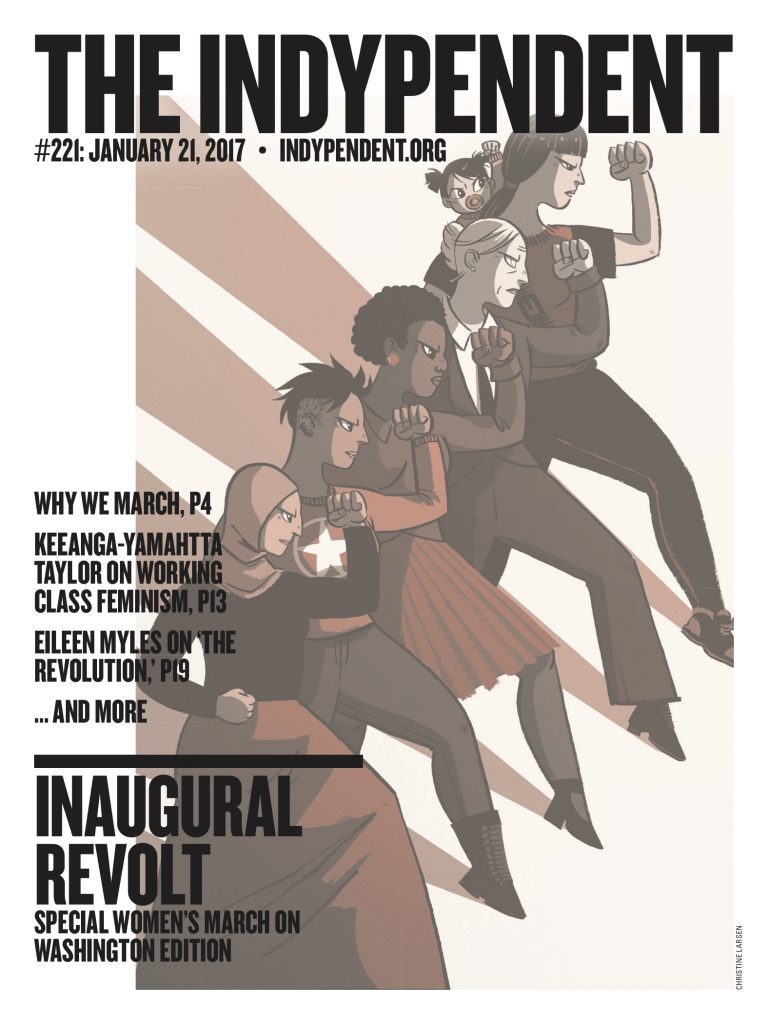 Millions of people in hundreds of cities took to the streets in women-led marches on the day after Trump’s inauguration. In conjunction with marches, we published a 20-page Women’s March special edition that amplified the voices and concerns of the most progressive wing of the movement. 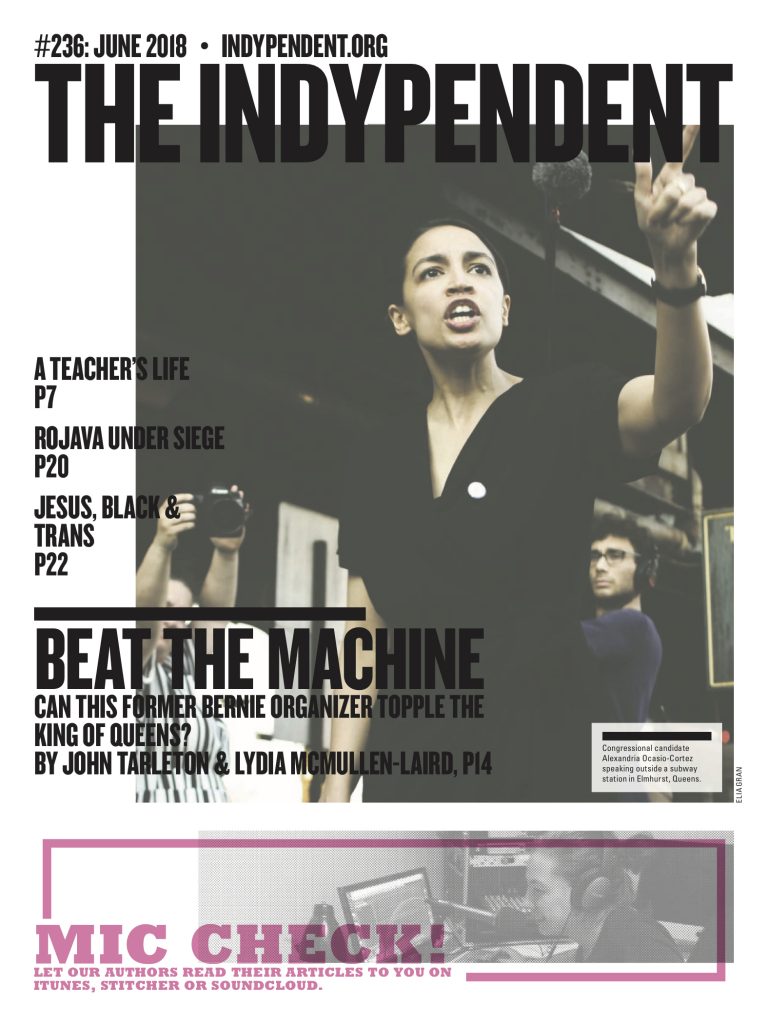 The Indy’s profile of AOC’s under-the-media radar run for Congress marks her first appearance on a newspaper or magazine cover. But it won’t be the last after the 28-year-old democratic socialist goes on to win a historic primary victory over Queens Democratic Party boss Joe Crowley. 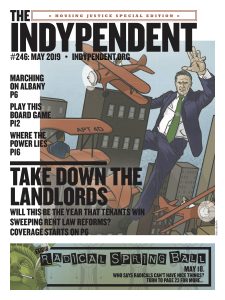 “Take Down The Landlords” screamed the headline of the May 2019 Indy, a 24-page affordable housing special edition. A month later, tenants rights advocates did just that winning sweeping rent law reforms in the NY state legislature that stunned the real estate industry. 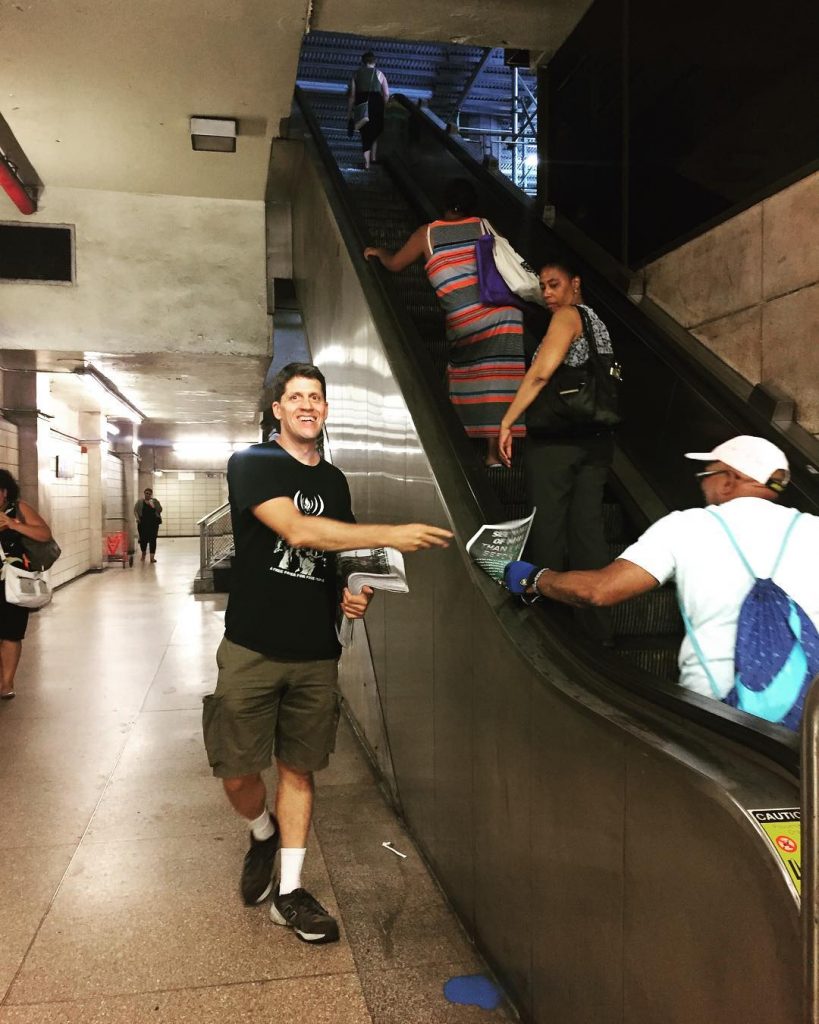