The Indypendent
Menu
A Free Paper for Free People
One of the millions of young people around world crying out for those in power to heed the science. Photo: Sue Brisk.

The Earth is burning. Images of the Amazon Rainforest ablaze over the summer have hammered this reality home. But it has been a matter of general scientific consensus since the 1980s that heat-trapping greenhouse gases are altering the composition of the planet’s atmosphere in ways that are making our little rock floating in starry darkness inhospitable to humans and many other forms of life.

The people of the Maldives, who are witnessing their island nation gradually disappear into the Indian Ocean know this. ExxonMobil knows this. Their scientists alerted the company to the risks posed by their products more than forty years ago. Those of us who’ve lived through the devastation wrought by storms like Sandy and Maria are well aware of the dangers extreme weather caused by climate change present to this thing called civilization.

‘We have to fight back or we’re all going to die soon.’

This reporter could go on. Climate change should be old news. The story should instead be about investments in renewable infrastructure, in sustainable agriculture and reforestation initiatives, reductions in greenhouse gas outputs, all on a scale commensurate with the crisis we are facing globally. This is World War III, friends, and we are the enemy. More specifically fossil fuels, its merchants, servants and its Wall Street profiteers are our enemy.

But so it is that in a country that likes to call itself the “Land of the Free,” what much of the world has taken as fact is still a matter of debate among its leaders, many of whom are religious fundamentalists who believe the world is 6,000 years old. If it is ending, they figure, so be it: Pack your bags, hun, grab the kids. We’re catching the last flight to Jerusalem. The second coming is nigh.

And so it was that a soft-spoken, 16-year-old girl from Sweden boarded a solar-powered sailboat and made her way across the Atlantic, arriving in New York Harbor in August. Greta Thunberg, the daughter of a popular Swedish mezzo-soprano who identifies as autistic, decided to stop attending her Friday classes last year and instead protest outside of Swedish Parliament. 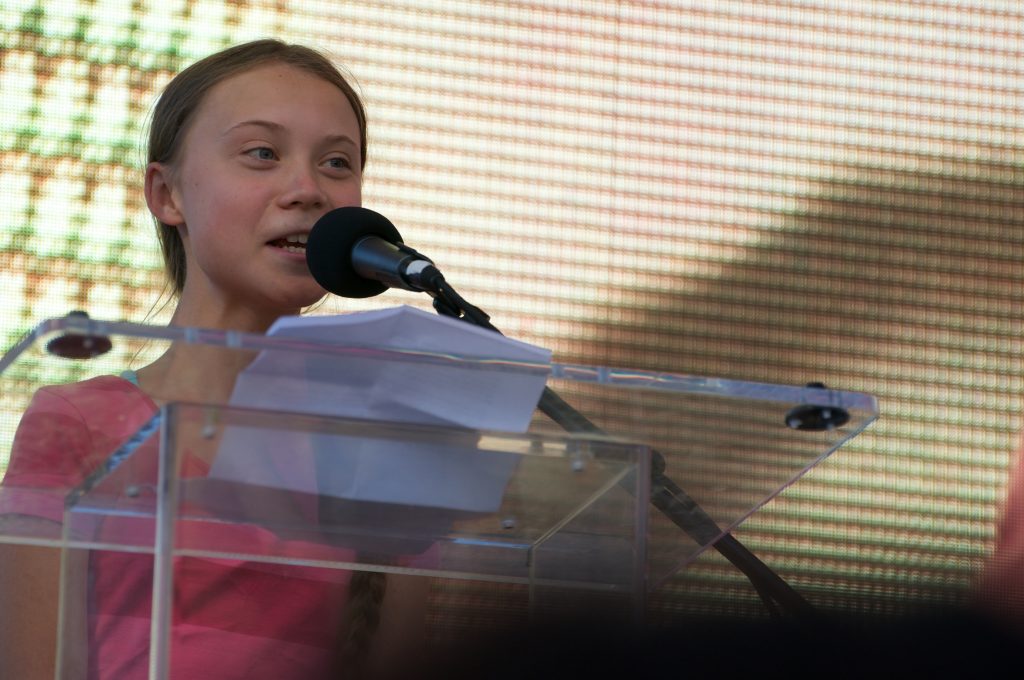 The questions her protest posed were blunt and simple enough. As she put it: “[W]hy should any young person be made to study for a future when no one is doing enough to save that future? What is the point of learning facts when the most important facts given by the finest scientists are ignored by our politicians?”

Since Thunberg’s initial demonstration, millions of students and their supporters have joined her around the world. Friday’s global climate strike, ahead of the United Nations General Assembly and the U.N. Climate Action Summit in New York next week, was the largest to date. Nearly five thousand events in 139 countries were held or are slated to be held on every continent. Approximately a quarter-million people joined Thunberg in Foley Square.

Shadi Yadollahi Khalas, a high school sophomore from Manhattan was on hand, Friday, marching shoulder to shoulder with tens of thousands of New Yorkers, many of them youths like her, playing hookie for the climate. “If you won’t act like adults we will,” the handwritten sign in her hands read.

“I see a lot of politicians in government and they don’t do anything,” she told The Indypendent. “They just sit around and they don’t pay attention to the emergency of our planet.”

“Basically, we have a bunch of old politicians in office right now,” said Jordan Gomes, a high school senior from Brooklyn. “They’re the ones who made the world messed up. They’re not doing anything to clean it up and it’s going to be stuck on us.”

“We have to fight back or we’re all going to die soon,” chimed his classmate Barry Thompson, whose sign read, “Save the Planet, End Capitalism.”

“If you really look at it now, it’s Big Pharma, it’s Big Oil, it’s big everything,” added Gomes. “They’re trying to make the most money at the least possible cost and do it without any concern for the world or anybody else on the planet. They’re just doing what they need to do to make sure the money goes into their pockets while the world is slowly deteriorating.” 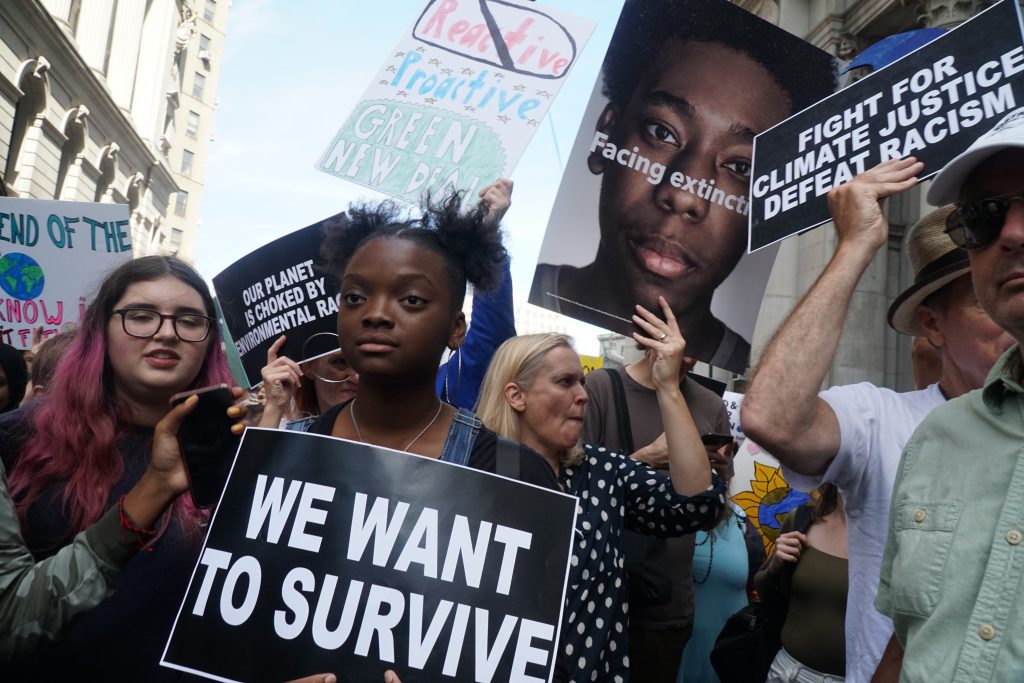 Second-grader Jasper Steinberg was a bit overwhelmed by the size of the crowd he found himself amongst and couldn’t remember why he came to the protest. His big sister, Leia, reminded him. “To protect the planet for my future and every kid with me,” said the fifth-grader.

Climate change is “terrifying,” her father, Peter, told The Indy. He and his partner are “doing everything we can to protect them,” he said.

Nairobi Hilaire, 22 years old and an activist with the No New Jails Coalition, was among the throngs in Foley Square. She carried a placard that asked, “Who has the right to breathe?”

I love to see this kind of unity and I hope that it can carry over to other people’s movements as well,” she added.

Meanwhile, hundreds of attendees at the annual Climate Justice Youth Summit held a separate #FrontlineClimateStrike on Friday afternoon in Brooklyn, marking the second anniversary of Hurricane Maria. Participants called for a “just transition” off of fossil fuels that recognizes the disproportionate impact climate change has on the Caribbean and nations throughout the Global South who have done little to cause global warming.

Back in lower Manhattan, the mass march snaked over to Broadway via Chambers street. Students hanging from street lamps and sitting on window ledges led chants against climate change and for a Green New Deal. Their voices and pounding drums filled the surrounding concrete and steel canyons all the way down to Battery Park.

The words of Victor Hugo came to this reporters mind, “Armies cannot stop an idea whose time has come.” An army of sorts showed up with Thunberg on the streets of Manhattan on Friday and millions the world over joined them in striking for the climate — a testament that the notion that there is no time like the present to address climate change has caught on.

“Right now we are the ones who are making a difference,” she said, speaking from a podium to those she has inspired and whose presence extended far past the boundaries of Battery Park’s green. “If no one else will take action, then we will.”

Sometimes one person can start a revolution. When a Tunisian street vendor tired of being hassled by corrupt police, lit himself on fire in protest, he helped spark the Arab Spring. Thunberg is the Mohamed Bouazizi of the global climate movement, but she has come to New York, not to start a fire but to put one out.

Be sure to tune into WBAI 99.5 on Monday evening at 6 p.m. for a full round-up of the climate strike and related events with The Indy’s managing editor Peter Rugh. For a list of protests, workshops and panels occurring in conjunction with the U.N. Climate Action Summit, see the special calendar we’ve curated.