The Indypendent
Menu
A Free Paper for Free People
Illustration by Emily Gage. 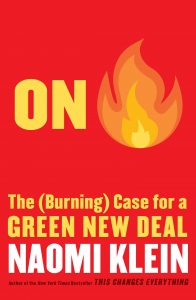 In her 2014 book This Changes Everything: Capitalism vs. The Climate, Naomi Klein writes, “If enough of us stop looking away and decide that climate change is a crisis worthy of Marshall Plan levels of response, then it will become one, and the political class will have to respond.”

Five years later, it’s happening. Thanks to passionate young climate activists and bold new elected officials like Alexandria Ocasio-Cortez, Klein’s vision of using sweeping government action to address both climate change and longstanding social inequities has arrived at the center of political debate. This time it comes under the rubric of the Green New Deal.

In On Fire: The (Burning) Case for a Green New Deal, Klein continues to build the case for why dramatic climate action is not only urgently needed but could lead to a more just and humane world. In On Fire as well as this interview, she also explores the connection between climate denialism and white supremacy and the rise in recent years of violent movements that hold a very different vision of how to respond to climate change.

This interview was lightly edited for length and clarity.

Indypendent: Bill McKibben of 350.org calls you the “intellectual godmother of the Green New Deal.”  How does it feel after many years of speaking out for something like a Green New Deal to see it go from a fringe idea to one of the main issues in the presidential campaign?

Naomi Klein: It feels surreal and very exciting that we’re finally actually talking about solutions on the scale of the crisis. It’s been too long in coming. So as exciting as it is, I think anyone immersed in the climate science can’t help but feel a sense of loss about the time that was missed when we could have been doing this.

You begin On Fire by focusing on the recent surge in youth activism. Why is that?

I start the book talking about the youth climate strikes because I think young people are bringing a fierce urgency to the climate crisis, a moral clarity and in the United States have absolutely changed the debate. The Sunrise Movement has organized brilliantly. They’ve put a huge amount of thought into what the pressure points are and how to build a mass movement, drawing on decades if not centuries of work from climate justice and indigenous organizers. They deserve a lot of credit for that, but it’s dangerous to have any kind of movement that limits itself by fetishizing one group over another. The most powerful, long-lasting movements are powerful in part because they recognize the power of having an intergenerational coalition.

In the book, you revisit long-held narratives about white supremacy and the domination of nature that exist in the United States and other English-speaking, settler-colonial societies.

For a long time now I’ve been trying to understand this thing called climate change denialism. I started by writing about the threat that climate action poses to an extreme free-market world view. If we’re going to take climate change seriously, we need massive investments in the public sphere. We need to reverse privatization so we actually have the levers to transform our transportation systems and our energy systems. So the whole neoliberal playbook goes out the window. And the climate crisis is also a threat to the fetish for centrism — don’t do anything rash, let’s split the difference, don’t let the perfect be the enemy of the good — because there’s no way to reconcile that definition of seriousness with the speed we need to move and the depth with which we need to change if we take the crisis seriously.

I also think the ideological worldview that the climate crisis challenges is deeper than either the fetish for liberal centrism or hard right free-market fundamentalism. It’s really a spiritual and narrative crisis that goes to the heart of the stories that underpin settler-colonial nations like the U.S., Canada, Australia, New Zealand and Brazil. Nations imagined by Europeans as spare countries, embedded in the way they named them: New England, New France, New Amsterdam.

The narrative of the frontier is inextricable from the idea of dominating nature and people. And that’s inextricable from the age of fossil fuels and the beginning of climate change because the first steam engines were marketed as a way of dominating the natural world because you could sail your ships wherever you wanted, you could build factories wherever you wanted, wherever labor could be best controlled. It’s always been this story of infinitely abusable, infinitely inexhaustible, infinitely dominatable nature. It’s always been this small group of powerful people, overwhelmingly men, who are able to dominate nature and the people seen as closest to nature whether they are African people, whether they are indigenous people, whether they are women who have so often been associated with nature.

And it continues to this day.

Exactly. When you see people like Bolsonaro and Trump, it’s so clear that their hatred for the Earth, the glee with which they are setting the world on fire is intermingled with their misogyny and racism, which is essential to their project. So we have this small group of men dominating and destroying nature and anything associated with the feminine, anything associated with the Earth. We are in the death throes of this belief. But it’s in the death throes we see the worst effects.

You’re describing neoliberal advanced capitalism at its worst. Are you imagining the next stage we’re building as a socialist or social-democratic stage?

We’re at a crossroads where if we are to avoid truly catastrophic climate change, we need not only a different economic model but truly different narratives at the heart of our project about who we are, about our relationship with nature. Is nature a machine we dominate? Or, are we in a web of life based on all kinds of different interdependent relationships?

You can call it ecosocialism, ecofeminism or ecofeminist socialism. There is no beautiful name for it. But it’s not industrial socialism, because we know that didn’t reckon with ecological limits. But we are at a crossroads not only for battling economic visions but of worldview and narratives and a reimagining of our place in the web of life. Do we continue down this path of what in the book I call climate barbarism, a barbaric resurgence of the most racist, supremacist dominance-based ideas that were absolutely fundamental to the forming of our nation as a settler-colonial state?

As more and more people are moving around the world seeking safety, we are seeing a resurgence of that supremacist world view in order to justify fortressing our borders. It means allowing people to drown by the thousands in the Mediterranean Sea, die in the desert, be separated from their parents in utterly barbaric concentration camps on the border. Those supremacist ideas ebb and flow in history and they are always resorted to when needed to justify barbarism. This has been what the Trump presidency has been about since the first days of his campaign.

We recently saw a different kind of climate response recently from Jonathan Franzen in the New Yorker. He argues we are hopelessly doomed and that there’s not one chance in 10,000 that humanity can rise to meet all the challenges placed in front of it over the next 12 years, as climate scientists warn we must do. What’s your response to someone like this who identifies as a liberal, accepts the science of climate change but doesn’t want his enjoyment of the present to be disturbed by thinking about a future problem that he thinks can’t be solved?

I don’t know how much I want to engage with Franzen specifically, but I believe he’s emblematic of a generation of liberals who believe they’re socially liberal, but who are incredibly suspicious of activism. They think it’s kind of unseemly, have never actually been part of any social movement, and don’t believe that societies are capable of great change. That’s why it’s useful to revive the memory of the original New Deal while being forever cognizant of the way it failed millions of people, so many black workers unprotected, women, domestic workers, agricultural workers, the systemic discrimination in allocation of relief particularly in Southern states. With all of those reminders and caveats and warnings, I think it’s still so important because in naming it the Green New Deal, we are reviving a historical memory in people that says: yes, there was a time not so long ago that the United States changed both its values and policies at an absolutely staggering scale and speed and placed at least the aspiration of social care at the center of its policies.

Many people were excluded from the New Deal’s circle of care. So the tapestry is complex but reviving that history really flies in the face of the claim from the Jonathan Franzens of the world that we really can’t do this, that humans are too inherently selfish and short-sighted. We need to revive memories of historical moments where we did come together and change quickly.

There are all kinds of incredibly destructive, publicly-owned fossil fuel companies responsible for a huge amount of carbon in the atmosphere so public does not equal green. However, when the levers of ownership are in the public or community hands, it’s easier to change than when they are privately controlled.

That’s why in Germany we saw hundreds of re-municipalizations of the energy grid. It wasn’t ideological. The private companies were refusing to transition to renewable energy quickly enough.

You mentioned central planning — I would say we need decentralized planning.

The great beauty of renewable energy is that it lends itself to much smaller scale ownership and control structures. Because fossil fuels are so expensive to dig up and refine and export, it lends itself to monopoly power whether in the hands of public players or private players. Renewable energy is lighter, and the inputs are everywhere, whether it’s wind or sunlight or wave power so you don’t just need a few big players whether public or private.

What the experience of Denmark and Germany shows is when you have community ownership over renewable energy, there’s much less pushback against wind farms and solar farms because people are having a say over how their communities are being transformed. It’s not just one landowner who suddenly sells off their land and gets a bunch of money and puts up a bunch of wind turbines. So if you want to move quickly, a commons approach based on communal ownership is incredibly practical.

In terms of how we organize, I think we have a long way to go in terms of organizing every sector in thinking about what a Green New Deal would mean, whether for teachers in schools, nurses in the healthcare industry, etc. What kinds of transitions are necessary that would both battle historic inequalities and injustices, exclusions, and would get us to 100 percent clean energy. That kind of inclusive process is also practical because it would mean more and more people would feel a sense of collective ownership of the Green New Deal — and they would fight to win it.

Nancy Romer is the co-founder of NYC People’s Climate Movement. John Tarleton is the executive editor of The Indypendent.

No Finish Line in Sight: An Interview with Naomi Klein (July 2017)

Naomi Klein Talks About The Indypendent (May 2008)