New York City plans to bury the 58-acre East River Park in order to protect it from rising tides caused by climate change. 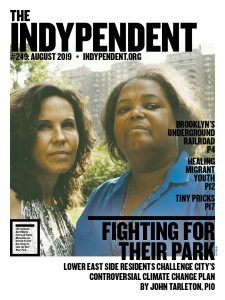 Locals spent years drafting their own climate protection plan, one that would save the park and keep it open. The difference between their’s and the city’s plan? The community’s would require temporarily closing a lane of nearby FDR Drive on weeknights. Rather than inconvenience drivers, whose vehicles are a driving force behind climate change, the city has decided to eviscerate the largest pocket of green space in lower Manhattan for years to come.

Working-class residents who live beside the park are organizing and fighting back with a “Bury the Plan Not the Park” march planned for Saturday, Sept. 21. at Tomkins Square Park beginning at noon. Read John Tarleton’s cover story on the showdown in The Indy’s August issue.