UPDATE: N.Y. State Supreme Court Justice Frank Nervo has granted an injunction against the Pacifica Foundation’s attempt to close WBAI. Regular programming should resume today. Both parties are currently due to appear before Justice Nervo on Friday, Oct. 18. Just after 10:30 p.m. on Monday, the following statement was issued by Berthold Reimers, WBAI General Manager, to all producers and staff at the station:

WBAI managed to get an injunction to stay the takeover of the station. This means the station is legally back in the hands of WBAI’s personnel. All programs are back on and there is much to be done and we have no time to waste. The producers of WBAI have organized a meeting tomorrow night [Tuesday, Oct. 8] at 6:30 PM at 325 Hudson Street near Van Dam.

Check back here for further updates.

Reggie Johnson was standing on a subway platform this morning worried that he was late for work when a colleague of his at WBAI 99.5 sent him a text. It contained a message from the California-based Pacifica Foundation, which holds the license to five community radio stations across the country, including the New York affiliate where the engineer has worked since 1993, first as a volunteer and, for the past 17 years, as a staff member.

“Due to ongoing and continued projections of further financial losses at WBAI, local station operations are being discontinued as of Oct. 7th, 2019,” the statement read. “We realize this news will come as a deep and painful shock, but we can no longer jeopardize the survival of the entire network. We are grateful for all your efforts over the years to help WBAI and its listeners. We deeply appreciate the loyalty you have shown to the station and the Pacifica Radio Network.”

Johnson himself was not informed directly by Pacifica or WBAI that he was being laid off.

He and other staff members arrived at the station Monday to find it on lockdown, with the elevator leading up to their offices on the third floor of 388 Atlantic Avenue shut off and the doors bolted at the stairway entrances.

The Indypendent hosts the Monday evening news broadcast on WBAI. This reporter was briefly given an audience with a gentleman who answered a stairwell door. Someone would be out shortly to answer my questions, I was told after identifying myself. Ten minutes later, another gentleman came to the door and informed me Pacifica had no comment.

WBAI has been on the air for 59 years. It provided live, in-depth and occasionally perilous coverage from the 1969 student occupations of Columbia University, the Tompkins Square rebellion 20 years later, and Occupy Wall Street in 2011. A little known folk singer from Minnesota named Bob Dylan made his radio debut on the station’s airwaves in 1962. 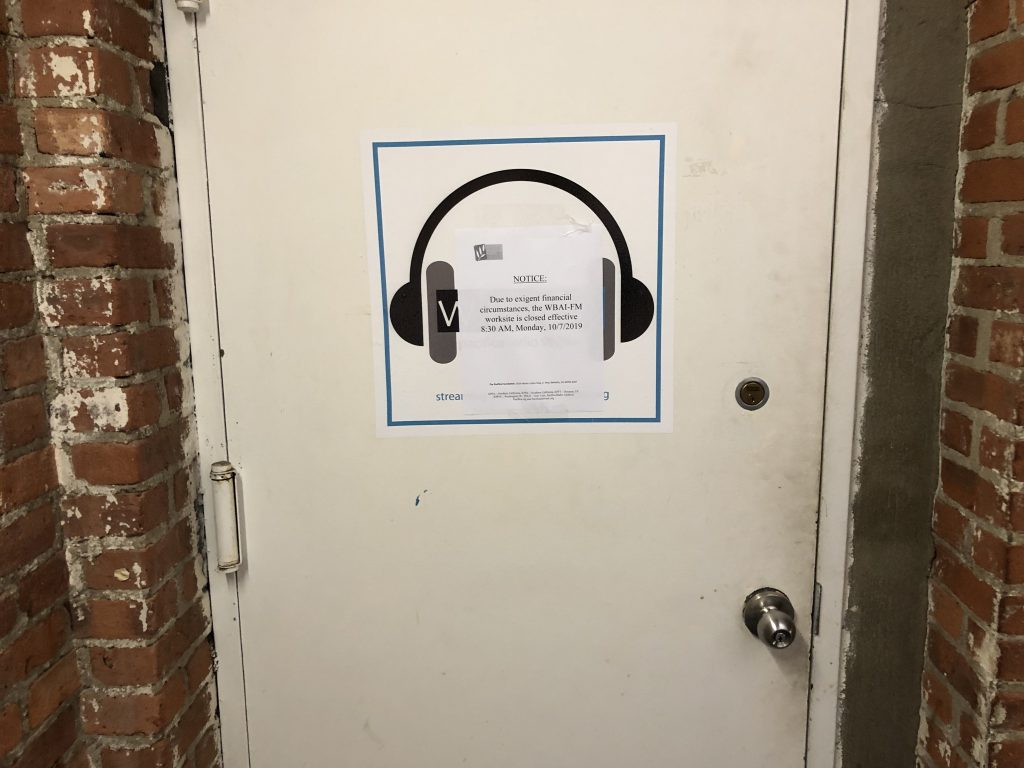 A note on WBAI’s front door tells those who arrive that due to “exigent financial circumstances” the station is closed. Photo: Peter Rugh.

In recent years, WBAI has struggled financially. It found itself trapped in an expensive lease on its transmitter with Empire State Realty Trust, owners of the Empire State Building. When it came to raising funds, it became increasingly reliant on offering premiums that promised dubious herbal health benefits. Christmas lights stood in for an on-air sign in its studio, which lacked soundproofing. The station’s money woes culminated in a $3-million bailout from Pacifica last year.

“WBAI, Pacifica in general, has reveled in turmoil,” said Johnson. “In fact, if turmoil were money, we’d all be multi-billionaires at this point.”

Pacifica itself, whose flagship station KPFA in Berkeley pioneered the listener-supported radio model in the 1950s, is struggling financially as well. According to the network’s most recent financial figures, WBAI possesses negative assets totaling $7 million and operated at a deficit of $600,000 in 2017.

“We are out of money and had no other viable options to keep staff on,” Pacifica’s interim Executive Director John Vernile said in a statement circulated by the Linda Perry, WBAI’s Program Director, at about 2:20 p.m. — well after the lockout went into effect. “This is not the end of listener-sponsored, non-commercial WBAI, but a pause in our local operation to regroup and raise needed funds.”

Selling the station or swapping its middle of the dial, 50,000-watt signal (valued at an estimated $20 million) is not under consideration, Vernile conveyed to Perry. Others with ties to WBAI remain suspicious, fretting that the other stations in Pacifica’s network are eager to sell the station and divide the spoils amongst themselves.

Arriving to find WBAI’s doors bolted, one producer, who preferred not to be identified, called the lockout a “coup.” He said he heard the station was going off the air via Facebook.

“Coming all the way from California to shut down New York?” he said. “This could have been handled differently.”

Following the bailout from Pacifica, WBAI took steps to turn itself around, recruiting a younger roster of voices and featuring a fresh and diverse lineup of news and cultural programming. Construction of a new studio at 388 Atlantic Avenue had just been completed when the station shut down.

“It’s a shock for anyone who has invested their time and their energy [into the station], and that includes the listeners too,” said Johnson.

Perry thanked the station’s producers via email for their “hard work and notes of support” and said she herself was “heartbroken.” More information will be forthcoming in the weeks ahead, she added.

In the meantime, Pacifica is broadcasting programming from its other stations over the 99.5 dial spot. While media organizations like WNYC and Gothamist welcome corporate sponsorships, outlets like WBAI, as well as this newspaper, do not. This helps ensure independent reporting and analysis and the freedom to take risks and innovate, but it also makes them far more reliant on the support of the communities they serve. As it stands now, radio listeners in the New York City metro area have no access to local, non-corporate news.

As one frequent WBAI listener put it: “On the one hand, I’m surprised it didn’t happen years ago. On the other, it’s a devastating loss.”