California has enacted a law that will limit rent increases for an estimated 8 million tenants, but the measure is closer to Oregon’s new anti-gouging law than to New York’s rent-stabilization system.

Assembly Bill 1482, passed by the state legislature Sept. 11, will limit annual rent increases to 5 percent plus inflation (with a maximum of 10 percent) in buildings more than 15 years old and single-family houses owned by corporations or real-estate investment trusts. It also requires “just cause” to evict tenants who’ve rented their homes for more than a year.

“It’s the first time we’ve had such a strong law passed on the state level,” says Larry Gross, executive director of the Coalition for Economic Survival, a Los Angeles-based tenant-rights group.” But, he notes, “it’s not rent control.”

The bill was passed amid rising pressure for the state to do something about its housing crisis. More than half of California’s 17.5 million renters spend more than 30 percent of their income on housing, according to a study released last year by the University of California at Berkeley’s Haas Institute. San Francisco and San Jose have among the highest rents in the nation. In Los Angeles, where about 60 percent of residents are renters, about one-third of tenants spend more than half their income on rent, says Gross.

About 15 California cities, including Los Angeles, San Francisco, Oakland, and Berkeley, have rent-control laws. However, a 1995 state law, the Costa-Hawkins Rental Housing Act, prohibits them from limiting rents on vacant apartments, single-family homes, or in buildings constructed after 1995. Last November, Proposition 10, a ballot initiative to repeal that law, lost by a 59–41 margin. Landlords outspent supporters by three to one. 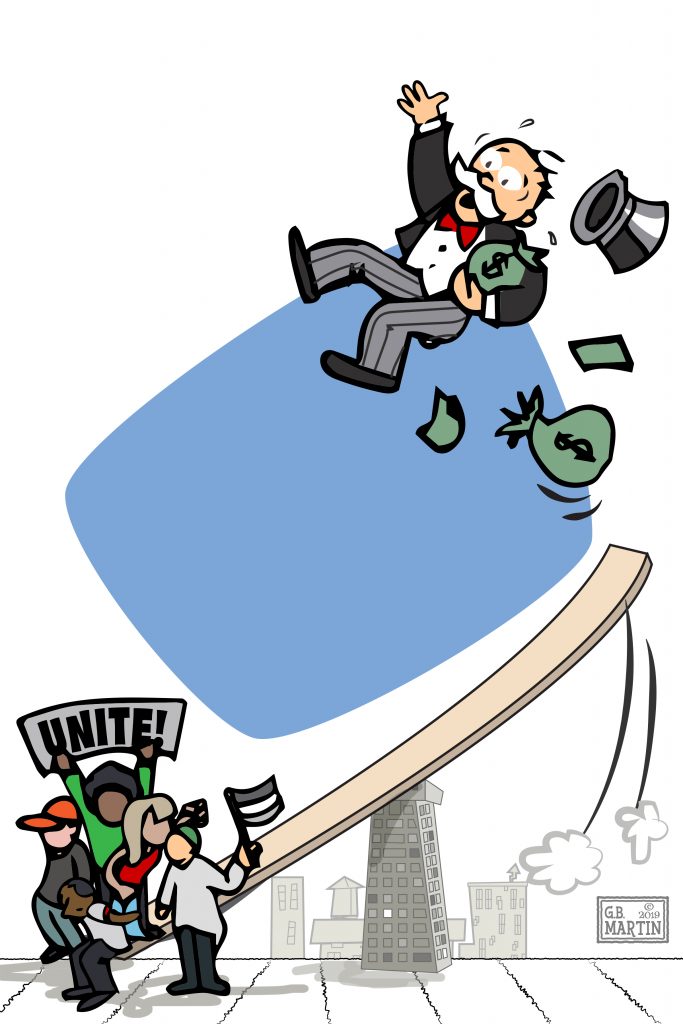 “We’ve seen more activism around tenants-rights issues than we’ve seen in decades,” says Gross. But Proposition 10 only won in areas that have an established tenant movement: San Francisco, Oakland and Berkeley, and the city of Los Angeles. It did worst in areas where tenant organizing is minimal, such as the Central Valley and the Inland Empire, L.A.’s far-eastern suburbs.

Gov. Gavin Newsom, who opposed Proposition 10, backed the rent-cap bill. It was also palatable to landlords: The California Apartment Association trade group did not oppose it, although the California Association of Realtors did. The California Building Industry Association, the developers’ leading lobby, announced it would not oppose the bill after a compromise exempted buildings less than 15 years old from the rent cap.

That it covers single-family homes is significant: Private-equity funds bought up thousands of foreclosed houses in California after the Great Recession. Invitation Homes, a spinoff from the Blackstone Group private-equity fund, is the largest private landlord in the Sacramento area, says Anya Svanoe of the Alliance of Californians for Community Empowerment.

Merika Reagan, an ACCE member who lives in an Invitation-owned house in eastern Oakland, says that provision will be a lifesaver. She joined ACCE when the landlord whacked her with a $350 rent increase, and the group organized protests that pressured the company to bring it down to $50. Still, she’s working 12 to 14 hours a day to make her $2,100 rent.

“These corporations are out of control,” she says. “Every time my lease is up, it’s like a panic attack.” Her neighborhood is gentrifying, with white people paying $3,000 for a one-bedroom house.

That displacement will continue, says Gross, unless two state laws are repealed: the Costa-Hawkins Act’s ban on restricting vacancy increases, and the Ellis Act, which developers have exploited to buy rent-controlled buildings and demolish them to build luxury housing.

To win that, housing activists say, grassroots organizing needs to develop enough power to counter real-estate money. An emerging battleground is the state capital of Sacramento, where more than half the 510,000 residents are renters.

Last year, a coalition of several groups collected 44,000 signatures to put a rent-control amendment to the city charter on the ballot for the March 2020 primary election. It would limit rent increases to between 2 and 5 percent a year, based on the Consumer Price Index.

The City Council responded on Sept. 12 by passing a rent-cap measure similar to the state law. But in exchange, it asked the coalition to withdraw the ballot initiative. Some groups agreed, figuring getting something was better than the risk of getting nothing if the initiative was swamped by real-estate money.

ACCE, the Sacramento Tenants Union and SEIU 1021 are persisting with the initiative. But the Council “is balking at putting it on the ballot,” says Uribe. The law doesn’t specify when initiatives with enough signatures have to be placed on the ballot. The city just has to inform people not less than 88 days before the election, says Elliot Stevenson of the Sacramento Tenants Union.

Proposition 10 won only 39 percent of the vote in Sacramento and its suburbs, but carried the city center solidly. “We will have a huge fight on our hands,” says Uribe. When she was phone-banking for Proposition 10, she says, she talked to people who believed “bizarre” misinformation from real-estate attack ads, such as that their rent would go up if local governments could enact stricter regulations.

“We are going to be campaigning,” says Stevenson. “The laws are only as good as the power built by tenants.”