Kampala, Uganda — A young, gay activist named Brian Wasswa was discovered lying in a pool of blood in his home in the eastern city of Jinja on Oct. 4, after apparently having been struck multiple times over the head by an unknown assailant. He was rushed to the hospital but soon died.

In Uganda, where the legacy of British imperial rule and American evangelizing have combined to create a climate of rampant homophobia, such attacks are not uncommon.

Days after Wasswa’s death, Uganda’s Minister of Ethics and Integrity, Simon Lokodo, threatened to resurrect a 2014 act making homosexuality punishable by death. The bill would be brought to parliament in the coming weeks, he said. Multiple government representatives denied these claims, but the damage was done. Lukodo’s incendiary comments began a media firestorm and sowed fresh seeds of anxiety in an already marginalized community.

“If [the anti-gay bill] comes back in its original form, then even me being who I am is a crime,” said Kasha Nabagesera, a prominent LGBTQ rights leader. “I can’t just say I am Kasha and this is who I am.”

The Anti-Homosexuality Act, colloquially known as the ‘Kill the Gays Bill,’ first surfaced in 2009, shortly after a visit to Uganda by American evangelical pastor Scott Lively. His Abiding Truth Ministries is listed as an anti-gay hate group by the Southern Poverty Law Center, but traveling to Uganda, Lively he presented himself as an expert on homosexuality and gave a series of long talks at churches and to Members of Parliament.

Activists see the original anti-gay legislation as partly the result of Lively’s and other Americans’ hate-mongering. “[American Evangelicals] introduced hostility,” said Frank Mugisha, the executive director of Sexual Minorities Uganda, the country’s leading LGBTQ advocacy organization. “They told Ugandans you have to be aggressive, you have to act now. They made [homosexuality] like a disease.”

Despite being widely condemned by international leaders, including then-President Barack Obama, the Anti-Homosexuality Act passed in 2014 — only slightly amended so that homosexuality carried a sentence of life in prison rather than death.

The legislation was ultimately overturned on a technicality in Uganda’s Constitutional Court, but deep animosity towards Uganda’s LGBTQ community remains.

“You can’t go to the grocery store next to your house, you can’t get a motorcycle in the boda boda [taxi] line,” said Nicholas Opiyo, a human rights lawyer who was instrumental in fighting the 2014 legislation.

Asked if LGBTQ individuals in Uganda fear being killed, Mugisha answered without hesitation. “Every day,” he said. “Every day.”

In August, a lesbian woman seeking eyeglasses was so savagely beaten by her doctor that her skull cracked and her arm was dislocated.

“It is very difficult if not impossible to make a causal link between political anti-LGBT discourse and any particular case of violence,” said Neela Ghoshal, a researcher for Human Rights Watch. “What’s clear is that it does send a message to the population that they can get away with anti-LGBT violence because they are essentially furthering the aims of the state.”

“We in the health sector do not discriminate against anyone,” Minister Aceng told The Indypendent. “Not by religion, not by gender, not by sex. Everybody is entitled to health care. That is very clear in the constitution.”

Arrested for Being Gay

While the constitution offers a semblance of protection to Uganda’s LGBTQ community, the country’s colonial-era penal code punishes acts such as sodomy with seven years to life in prison.

“This is the worst thing that could have happened to anyone,” said one of the arrested men, concerned for his safety and speaking on the condition of anonymity. “It is demeaning. It is inhumane.” He added that he and his compatriots were “beaten and slapped” when they hesitated to comply with officers’ orders. 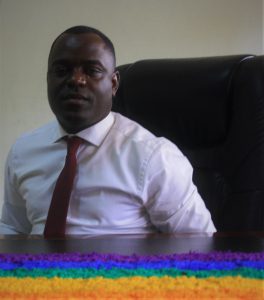 The United Nations Committee Against Torture has condemned the practice of forced exams, but Ugandan police claim they are a necessary part of evidence gathering. “It is of course a procedure in investigations,” Fred Enanga, a spokesperson for the Kampala police, told The Indy. “These are probably cases that require all evidence that is on a person’s body.”

“You want to commit suicide,” said the arrested man. “We don’t have any hope.”

In this volatile environment, observers worry that the Anti-Homosexuality Act could be introduced by an individual member of parliament, even though the ruling National Resistance Movement party officially denies that it plans to propose the controversial legislation once more.

At the very least, the anti-gay sentiment caused by Lokodo’s remarks could be used to divert attention from problems facing the government, including a growing “People Power” movement led by popular singer Bobi Wine. Wine, who has previously made homophobic comments in his songs, has vowed to end President Yoweri Museveni’s decades-long rule and the government is actively seeking to suppress his activism.

“Often when the state is facing criticism they seek distraction, so they pull out the LGBT boogeyman to get people to stop thinking about the other human rights violations that are taking place in Uganda,” said Ghoshal, of Human Rights Watch.

“We’ve seen this in a lot of countries,” added Adam Shapiro of Front Line Defenders, an organization dedicated to protecting the lives of activists abroad. “Riling up people against the threat that the LGBT community allegedly poses becomes a way to mobilize voters.”

Uganda is only 18 months away from what will surely be a contentious national election in which Wine plans to run for president.

Meanwhile, police in Jinja tell The Indy they are continuing to investigate Brian Wasswa’s death. He is the fourth LGBTQ Ugandan to be killed a span of just three months.

In the midst of threats, deaths, and beatings, a deep sense of fear and sorrow seem all that is certain for Uganda’s LGBTQ community.

For activist Kasha Nabagesera, Wasswa’s death is a reminder of David Kato, a gay man who was beaten to death with a hammer outside of his Kampala home in 2011.

Speaking with The Indy as early morning sunshine poured into his Kampala office, Opiyo, the lawyer, evoked Martin Niemoller’s famous holocaust remembrance poem: “First they came for the Communists/ And I did not speak out/ Because I was not a Communist…”

“This isn’t about a small community,” he said. “This is a human rights violation. If we allow the government and society to violate the rights of LGBT individuals, they can go on and get the next people, the next minority.”