The Indypendent
Menu
A Free Paper for Free People
Illustration by Esteban Guerra.

I arrived in Porto Velho, the state capital of Rondonia in the Brazilian Amazon, to find the city completely engulfed in smoke. My eyes burned and my sinuses clogged up as I got into a taxi. I asked the driver about it and he told me nothing was wrong.

“This is all just fake news,” he says. “The media is making a circus out of it. We always have fires this time of year. It’s just farmers burning weeds.”

He is a young man with gel in his hair and a necklace with a crucifix hanging over his t-shirt. I assumed he was one of the 71 percent of voters in the state who voted last year for Jair Bolsonaro, Brazil’s new far-right president.

While it’s true that many Brazilian farmers torch their land before planting to burn off weeds and enrich the soil with ash, there’s a lot more fires this year than in the past. According to Rondonia’s fire department, forest fires are up by 293 percent in the six counties surrounding Porto Velho and the increase is not being driven by brush fires but by burning trees inside of indigenous reservations. Satellite images from NASA confirm this. The Amazon rainforest does not naturally catch fire, so these are all man-made.

“Our land is soaked in blood,” says Luciana Oliveira, a local journalist who has received death threats from people connected to the ruralista lobby — the big ranchers and farmers who form a key support base for Bolsonaro’s government. “We are the last frontier of forest cover, of jungle, so agribusiness moves forward. The environment is an obstacle which it can only cross by destroying, and all we have here is destruction.”

The world gasped in August when it saw images of Brazil’s Amazon rainforest going up in flames at an unprecedented rate. While major media outlets have moved on to other dramatic stories, the fires continue unabated in a rainforest that is home to hundreds of indigenous tribes and is the most biodiverse place on Earth. The Amazon is also the world’s largest carbon sink, its 2.1 million square miles of lush vegetation removing CO2 from the air and releasing oxygen back into the atmosphere. If it were to be transformed into dry grassland or desert as many scientists fear it will be within a few decades, it would be an environmental calamity for a world increasingly menaced by climate change. 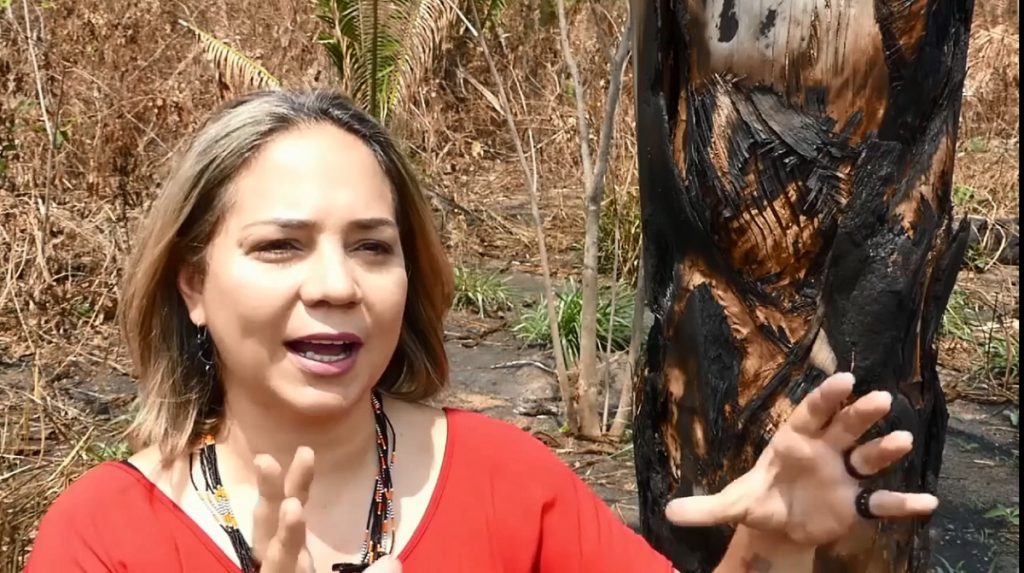 Luciana Oliveira is a local journalist in Porto Velho, Brazil who has received death threats from people connected to the ruralista lobby. Photo: Brian Mier.

While the fate of the Amazon is of global concern, the struggle over its future is a local story where two strikingly different visions of what the rainforest is for and how it should be managed are contending with each other.

Rondonia, which is the size of Great Britain, has been a bastion of right-wing politics since the 1980s when thousands of primarily white, evangelical Christian ranchers from southern Brazil poured into the area. The settlers followed in the wake of a $440 million partnership between the World Bank and Brazil’s former military dictatorship. By the time international outcry caused the World Bank to cancel the project in 1986, Rondonia had become a major beef supplier to McDonald’s.

The disaster which befell Rondonia led to a fight for alternative development models. In the neighboring state of Acre, the rubber tappers union expelled the ranchers and gained control of the state government along with the leftist Workers Party (PT). They went on to transform it into a model of a low carbon economy. As of 2018, 87 percent of Acre’s forest cover remained intact and its main commodities were sustainable rainforest products such as natural latex, Brasil nut, and Acai. More recently, the expanding fires in Rondonia have burned their way into Acre spreading a swath of destruction.

The success of Acre’s model influenced the environmental policies of the PT party, which won four consecutive presidential elections starting in 2002. President Lula da Silva appointed Marina Silva, an Acre senator and former top official in the rubber tappers union as his environmental minister. From 2003 to 2016, PT governments spent billions on solar energy, transformed Brazil into the sixth largest producer of wind energy, built one million family rainwater capture systems in the drought-plagued rural northeast, and pumped billions of dollars into technical support and financing for family farmers. Building on successful projects in Acre, the federal government also amped up support for renewable forest products, such as babaçu coconut oil, cocoa, and rubber.

This is not to say that Brazil was an ecological utopia under Lula. He heavily subsidized monoculture production in parts of the country in order to boost export earnings while legalizing genetically modified crops in the process. Nevertheless, Brazil met its REDD+ greenhouse gas reduction goals nine years early and reduced deforestation by 84 percent. In 2014, the Union of Concerned Scientists made a presentation in the UN in which it called Brazil the “world champion in deforestation reduction.” During the presidency of Dilma Rousseff, Lula’s former Mines and Energy Minister, deforestation began to creep back upwards, but this was nothing compared with what would come next. 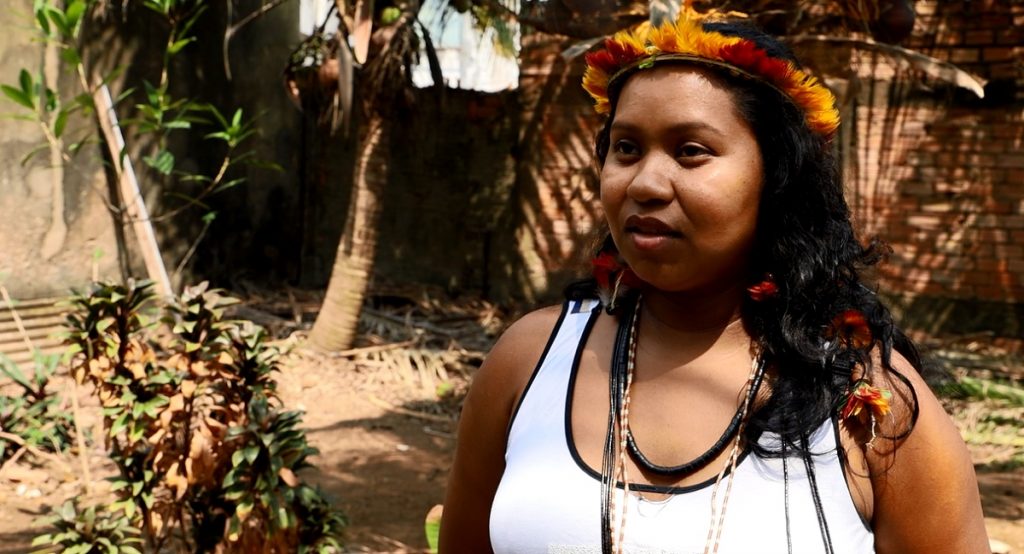 Rosa, an indigenous leader in the state of Rondonia. Photo: Brian Mier.

After Rousseff was impeached on spurious grounds in 2016, her conservative successor Michel Temer slashed funding for IBAMA, the environmental protection agency, by 51 percent. He also dissolved the Ministry of Agrarian Development, which had been set up to support small farmers As new pesticides produced by the likes of Monsanto were legalized, profits soared for transnational companies like Cargill and Blackstone-financed beef producer JBS that grow monoculture crops in the Amazon.

Then things got really bad.

‘The environment is an obstacle which agribusiness can only cross by destroying, and all we have here is destruction.’

In 2018 Lula, who was still the most popular politician in Brazil, was jailed on trumped-up corruption charges. With Lula out of the way and unable to speak or give interviews from his prison cell and public discontent rising with insider politics as usual (does this sound familiar?), Jair Bolsonaro, an LGBT-bashing former army captain, won a surprise election victory.  He was backed by a powerful alliance of Christian evangelicals, big agribusiness and the military also referred to as “B, B and B” — Bibles, Beef and Bullets. These groups all see the Amazon as a resource to be opened up and exploited and the rainforest’s indigenous inhabitants as savages to either be “civilized” or killed.

Known as the “Trump of the Tropics,” one of President Bolsonaro’s first moves was to announce plans to open up 50 percent of all indigenous reservations in the Amazon — which make up 23 percent of all remaining rainforest — for the loggers, miners, ranchers, and farmers connected to international supply chains. He then fired 22 state directors of IBAMA and refused to replace them. It sent a signal to deforesters that they will not be punished. When the head of INPE, the national space institute, warned the public that fires were beginning to burn out of the control, Bolsonaro fired him. Meanwhile, his environmental minister and his foreign affairs minister have all claimed that the increase in fires — which sent a smoke cloud up that was so big the city of São Paulo, over 1,500 miles away, went pitch dark at 3 p.m. last month, — is “fake news”.

“There is a land theft operation underway,” says Frei Volmir, a long-haired Catholic Priest who has been working with indigenous people in Rondonia for 30 years. “A few days ago there were over 600 fire points registered near the Karipuna reservation. What does this mean? That the people are burning and that they will burn more and the government is doing nothing to stop it. Inside the Karipuna territory, there were two free indigenous tribes living isolated deep in the forest. Now if you ask me if they are still living there, I don’t know. Because as they kill the forest they kill the isolated tribes who live there.” 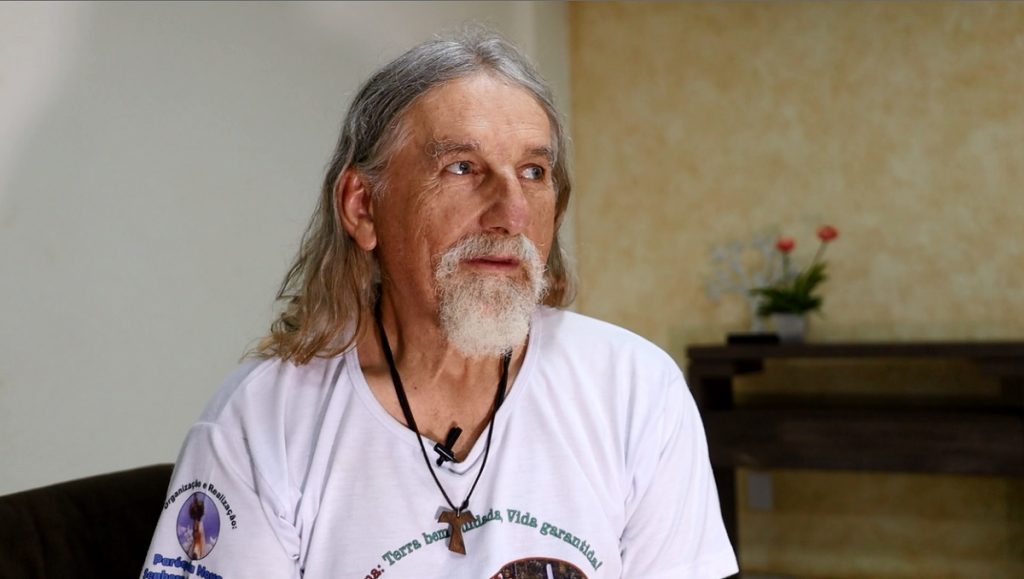 rei Volmir is a Catholic priest who has been working with indigenous people in Rondonia for 30 years. Photo: Brian Mier.

As the PT regroups with unions and a social movement mobilizes to fight against Bolsonaro’s plans for the Amazon, Ramon Cajui is running to be the PT’s party leader in Porto Velho. A civil service worker of indigenous descent, I meet with him at Porto Velho’s only scenic venue — a small public square with three Victorian-era water towers on it. From his perspective, the forest isn’t the only thing that has been burned to the ground but also the administrative arms of the government that served the public interest.

“If FUNAI, the indigenous affairs bureau, wasn’t great, at least the state was presented as an entity to contain this encroachment. Now it’s gone,” says Cajui. “And we no longer have a public prosecutors’ office that defends indigenous peoples. The structure of the Brazilian state in the Bolsonaro government has been turned against the indigenous people to reduce their territory and to dismantle land grants indigenous lands and forest reserves.”

“What is happening this year,” he adds, “is not caused by the drought, it is the result of a planned action by these political forces and the greed of capital to increase occupied territory to produce soy and beef.”

As the fires raged out of control, Donald Trump has defended Bolsonaro. However, some U.S. lawmakers are waking up to the unfolding tragedy. On Sept. 25, a group of Democrats introduced Resolution 594 in the House of Representatives. In addition to calling for an investigation into the role the U.S. Department of Justice played in helping corrupt Brazilian prosecutors target Lula, it calls for both government funding and U.S. support for World Bank and IMF loans to Brazil to be cut off until the Bolsonaro administration shows a real commitment to protecting indigenous people and the Amazon. The resolution was introduced by Arizona Congressman Raul Grijalva and co-signed by 13 other Democratic members of the House. If you would like to show solidarity with the indigenous peoples of the Amazon and Brazilian left opposition to Jair Bolsonaro, please call your lawmakers and ask them to support this resolution and help put an end to this crisis. Another way to help is to vote out Bolsonaro’s buddy Trump in 2020.

Brian Mier is the editor and publisher of brasilwire.com.