From a young age, Philadelphia native B.L. Shirelle has been a writer. She began rapping at seven and when she was eight years old her teacher entered her into a K through 12 poetry competition. She won third place overall. But while Shirelle excelled in school, life was different at home.

Her mother was a drug addict. At the age of about 12, Shirelle began selling drugs alongside her. Before she turned 17, the pair had been arrested together approximately three times and her life of crime didn’t end there.

“By the time I was 18 I was in prison serving a 12-year sentence for aggravated assault,” she said. “I got out when I was around 24. Lack of resources, things like that, lack of patience, lack of self-esteem led me to selling drugs again. I wasn’t really patient enough with myself and at that time, there weren’t a lot of resources for violent offenders to get good jobs.”

While serving her second sentence in Muncy state prison in 2014, Shirelle performed hip-hop songs with three other inmates as part of a TEDx talk. Shirelle wrote the numbers the group performed.

Meanwhile, beyond Muncy’s walls, artist and activist Fury Young had an idea to launch a concept album called Die Jim Crow that would incorporate the music of incarcerated and formerly-incarcerated people from across the country.

He had moved back home to New York in 2013 after trying to launch a film career in Los Angeles, was halfway through reading Michelle Alexander’s The New Jim Crow: Mass Incarceration in the Age of Colorblindness and was listening to concept albums by artists like Pink Floyd.

Young said the issue of the prison industrial complex resonated with him because he has friends who had been incarcerated. But at first he wanted to pass the idea of making an album on to someone else, since, as he puts it, “I’m white, I’m Jewish, I’ve never been to prison.”

But after sharing his idea with people inside and out of prison, it became clear Die Jim Crow was a project he needed to spearhead, teaming up with Brooklyn-based artist and producer Dr. Israel.

While launching his project and reaching out to different prisons, Young came across Shirelle’s TEDx video and ultimately wrote to her, sharing his idea and asking if she wanted to take part. She wrote a few songs and sent them back to him.

Shirelle had also read The New Jim Crow and said she was not surprised by Alexander’s comparisons of the prison industrial complex to slavery and Jim Crow laws.

“I was already aware at that point,” she said. “This was my life. As a child, I was a convict kid. I was a person who was basically, I don’t want to call myself a victim, but, I guess, of war on drugs, crack cocaine. I had already knew that all this stuff was derived from a structural form of racism in the country.” 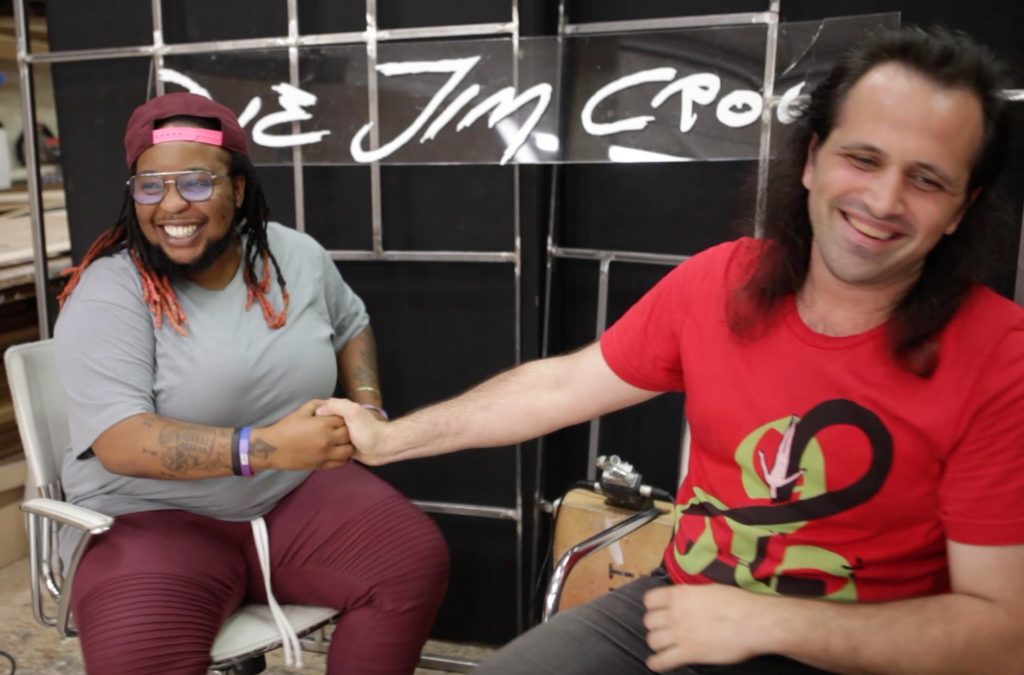 During her first prison sentence, Shirelle filled notebooks with her poetry, but when Young contacted her, she was in a poor mental state and was not writing. There were no real opportunities to perform in prison either.

“It was kind of something that if we got in the yard and people were rapping, I would kind of come out, but I didn’t come out for everybody,” she said.

Her correspondence with Young inspired her and her music was featured on the original 2016 Die Jim Crow EP.

While corresponding with Shirelle, Young was also traveling around the country, recording incarcerated and formerly-incarcerated artists. He decided Die Jim Crow could not just be captured on one record. He formed a Die Jim Crow nonprofit with plans to release more records featuring the dozens of artists he had recorded. Now out of prison, Shirelle is now the organization’s deputy director. The group sells vinyl records other merchandise like T-shirts at events and plans to make Die Jim Crow a full-fledged record label that would offer incarcerated and formerly-incarcerated musicians the same platform for their music as any artist would receive.

Last month, it launched a Kickstarter campaign to raise money. Up until now, the project has mainly been self-funded and relied on small donations. Currently, it operates under Fractured Atlas, a non-profit arts organization, but Young aims to make it independent.

He said the project has been beneficial for the many formerly-incarcerated people who work with him.

“They’re learning a ton,” Young said. “I mean, we’re all learning a ton. But, they’re learning a lot of different skills and how to be in a professional setting and work in a nonprofit. And again, so am I. But for someone who grew up selling drugs since they were 12 years old, I think that’s fucking amazing.”

Another musician and lyricist involved in the project goes by the name of Ach. He is a producer, part of a group called the Masses and is serving a 22-year sentence in South Carolina.

“When the opportunity came with Fury Young and the Die Jim Crow project, just knowing that I could not only have my voice heard for something that I’ve been chasing my whole life, but also to be doing something that is a voice for social change for the condition that I’m in right now, it was a no-brainer for me,” Ach said. “I just wanted to be a part of it.”

When he was younger, Ach said, his passion for hip-hop led him to chase a problematic lifestyle he thought would be exciting. Now, he uses his verses to inspire others to think about the decisions they make.

“With the group as a whole, we have a whole plethora of styles and angles but overall our overall message is, don’t do anything that will put you in this situation or that will destroy your community or your families,” Ach said.

For Shirelle, music is deeply personal and therapeutic. She wrote the lyrics for the fiery 2018 Die Jim Crow single, “Headed to the Streets.” Though none of the artists’ music has been picked up by radio stations, Rolling Stone announced the release of the song with an accompanying feature on the organization.

“I’m haunted by the penitentiary screams,” she raps in “Headed to the Streets,” her voice urgent and resonant:

Victimized
Shiesty bitch with schemes
Institutionalized
I carry razors in the slits of my jeans
Hidden in seams
Tell me what this liberty means
Now that I’m out can I live and be free?

The song, like all Die Jim Crow’s projects, was a collaborative, patchwork effort involving musicians from various prisons and on the outside. Young brought Shirelle’s lyrics to composers Anthony McKinney and Mark B. Springer, who are both serving life sentences at Warren Correctional Institution (WCI) in Ohio. They created the music to accompany Shirelle’s lyrics, and McKinney also sang on the track. A group of instrumentalists from WCI also played on the song.  A musician with the moniker gHSTS & gUITARS recorded the lead guitar. He spent his youth in the juvenile justice system. Ezette Edouard and Dexter Nurse, who were both incarcerated in the New York state prison system, provided the background lyrics.

Young usually finds inmates to work with by reaching out to various prisons and asking volunteers or employees at the facilities to put him in touch with people who may be interested. However, he said, the nature of working with incarcerated people can lead to challenges.

“There’s always things,” he said. “You just don’t know when people are going to get transferred. You don’t know when someone’s going to be in lockup, like, in solitary. or just locked in their cell.”

Young said he rarely knows what convictions inmates are serving for, but rather focuses on how he works with them as artists.

“When you are around people, people are people,” he said. “If you’re vibing with someone and you pick up that they’re trying to give out good intentions and work hard and be musical and so-forth, it’s going to work out.”

Although Young does not consider himself a prison abolitionist, he believes everyone deserves dignity and second chances.

“I think that the ‘worst of the worst,’ so to speak, still deserve another shot,” he said. “There’s a guy we work with named Michael Tennesen who did kill five people. And he’s one of the hearts of Die Jim Crow. This guy is one of the strongest white allies I’ve ever met. This guy has stuck his neck out for people who are black and queer. This guy is really pushing the values of what we stand for.”

For Shirelle, Die Jim Crow is an opportunity to help incarcerated people feel like they can leave a legacy, even if they are spending life behind bars. For formerly-incarcerated people re-entering society, the project can help them use their talents constructively.

“The prison lifestyle is a dehumanizing lifestyle,” she said. “They try to make you feel like you’re not worthy of certain things. And it takes a really strong mind to not believe those things. So if we give a person something to do to be of value, if we actually give these people platforms where they can be heard and platforms where they can share their talent and hear people saying, ‘Yo, that’s awesome. Keep going. You’re super talented,’ it might give a lifer a reason to actually get up every day and live for the moment or it may give a long-termer something to look forward to every day.”

For Ach, music is about redemption.