The Indypendent
Menu
A Free Paper for Free People
A note on WBAI's door Monday told those who arrived that due to "exigent financial circumstances" the station is closed. Photo: Peter Rugh.

WBAI’s Listener Station Board (LSB) met Wednesday night for the first time since the station was shut down Monday by the Pacifica Foundation. The station will be back in court this morning. Here are some takeaways.

WBAI got hit really hard on Monday. Pacifica not only took over the station’s transmitter and website, fired the general manager and program director and disabled both the old and new studio being built on-site, but it also cleaned out WBAI’s bank account and disabled the station’s ability to fundraise for itself.

The station has regained control of its third-floor offices at 388 Atlantic Avenue with an assist from the building’s owner who replaced the locks that Pacifica put on the doors to WBAI’s offices.

WBAI lawyers Arthur Schwartz and Mimi Rosenberg will be back in court this morning facing off against a high-powered team of attorneys from Pacifica who will try to have a temporary restraining order against the foundation overturned on appeal.

Pacifica, which is based in Berkeley, California, will make the straightforward argument that it owns WBAI’s license and it can do with its property as it sees fit. WBAI’s lawyers will question the arbitrary and secretive manner in which the shutdown was carried out by a “rogue faction” on the network’s national board and their hand-picked executive director.

WBAI’s license was donated to Pacifica in 1960 by a philanthropist named Louis Schweitzer who wanted the station to be preserved as a non-commercial entity to serve the people of New York. Attorneys for the station will also argue that Pacifica national’s shutdown violates that trust.

WBAI has been financially troubled for many years. There are elements within Pacifica, especially around its flagship station in Berkeley, that have long wanted to close down WBAI, sell it off its location in the middle of the FM dial in the largest media market in the country and use the proceeds to recapitalize the network which has also been in financial distress for many years.

Pacifica national insists it is looking to relaunch WBAI not kill it off. But at this time WBAI is being used as a repeater signal for programming piped in from California. Local voices have been sidelined. 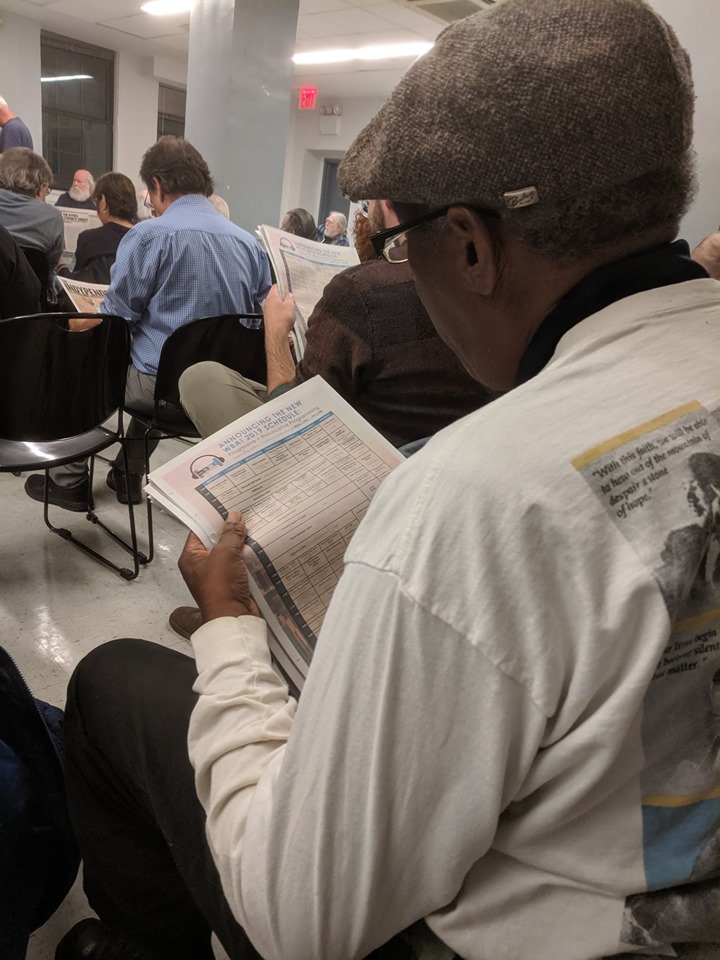 An attendee at Monday’s board meeting examines The Indypendent, which carried WBAI’s new fall programming schedule on its back page. It won’t be easy, but the station’s supporters say they need to get WBAI back on the air somehow, so people can listen to those programs again. Photo: John Tarleton.

This reporter has never seen an LSB meeting where the members of the different factions that have long vied for control of the station have worked together so harmoniously. Nothing like facing obliteration by a common foe to bring people together. There was a smattering of young people in the audience, including DSA members who are running for positions on the LSB as members of the Red Wave slate.

The news of Monday’s closure was greeted by some with a shrug. The station had been going downhill for a long time with a loss of quality programming, a shrinking audience, and fewer listener-sponsors, the narrative goes, so its demise was sad but inevitable. That’s true except the station has finally been on the upswing in the past year under the leadership of new program director Linda Barr Perry.

Stale shows have been replaced with fresh new voices from the New York left, plus other independent media outlets including The Indypendent. The station still faced a long uphill climb to become fully sustainable, but its audience has been growing along with membership and revenues in the most recent fund drive that was halted by the station’s closure.