The Indypendent
Menu
A Free Paper for Free People
ARCHIE BUNKER & Co: “All In The Family” used a house on this Glendale block for its show about a white working-class father and his family.Photo: Jacob Spetzler.

Homeowners in opposition to homeless shelters in Queens have become increasingly militant over the last few years, adopting confrontational tactics and violent rhetoric. Eschewing the usual talk of quality-of-life concerns and parking, they have picketed a synagogue and one Ozone Park landlord recently staged a hunger strike. In the Glendale neighborhood, where the city plans to build a shelter for 200 single men, one resident drew robust applause at a Community Board 5 meeting in early October when she declared “I hope somebody’s gonna burn the place down.”

That shelter, planned for a former factory at 78-16 Cooper Avenue, is one of two the city plans on bringing to the area. The other facility, which would house 132 homeless families, will be at 1616 Summerfield Street, in nearby Ridgewood, and is scheduled to open late next year.

Glendale, a quiet lower-middle-class neighborhood of 35,000 people, is on Queens’ southwestern edge, separated on the south from Brooklyn’s East New York by a belt of cemeteries, separated from Middle Village to the north by more cemeteries and isolated from the city in general by its lack of subway service.

Having resisted both white flight and gentrification, Glendale is one of the city’s few remaining white-ethnic neighborhoods. It’s worth pointing out that the proposed Cooper Avenue shelter is roughly 10 blocks from the home of Archie Bunker in “All in the Family.” 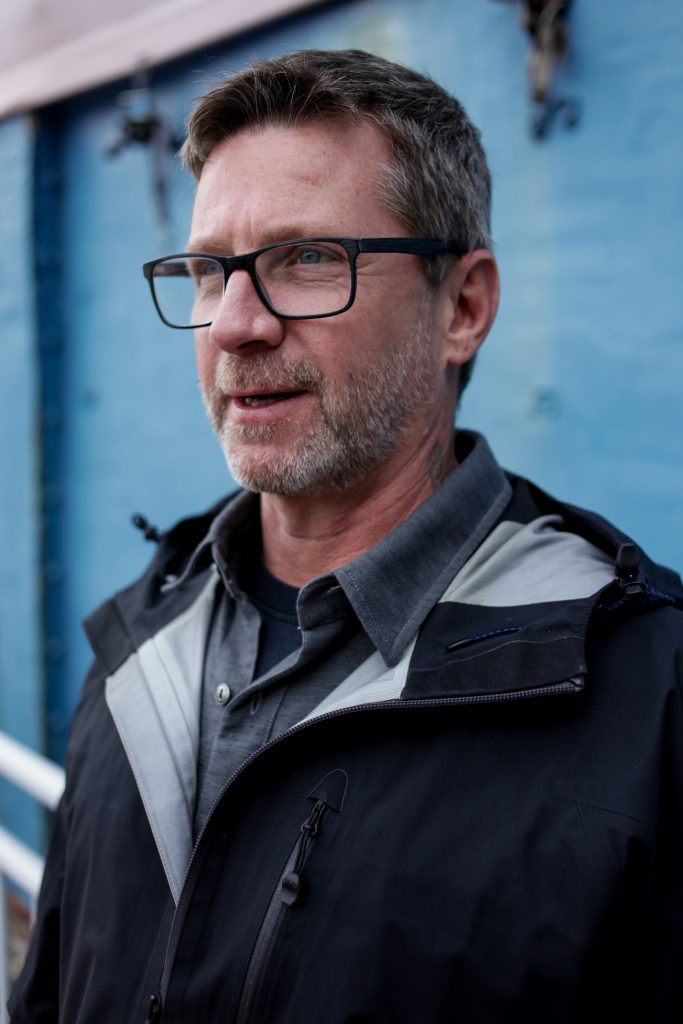 The kind of organized reactionary populism on display in Queens has largely dwindled in the face of changing demographics. Brooklyn’s Bensonhurst is now as well-known for Asian restaurants as it once was for the racist murder of Yusuf Hawkins in 1989. Canarsie, wherein 1972 white parents pulled their kids out of the schools in opposition to desegregation, is now close to 85 percent black with a large Caribbean homeowning population. Ridgewood, just west of Glendale, was once almost all white, but is now home to Latinos, Muslim immigrants and artists crossing the border from Bushwick in search of cheaper rent.

But Glendale, along with neighboring Maspeth and Middle Village, has historically been conservative. In the 1990s mayoral elections, Rudolph Giuliani won more than 85 percent of the vote there. In 2016, Glendale and Middle Village were among the few city neighborhoods where Donald Trump won a significant number of precincts.

Formed in 1976 as nearby Bushwick burned, 104 COP patrols the neighborhood nightly, and operates on a broken-windows philosophy. It sees quality-of-life crimes, especially graffiti, as a gateway to drugs, prostitution and a general slide into lawlessness. The group works closely with the Police Department’s 104th Precinct and claims to have undergone homeland security and anti-terrorism training.

“I’d be curious to learn the data on how many calls originating from GCOP result in arrest and who exactly is targeted,” says Caty Seger, a member of the Ridgewood Tenants Union (RTU) who grew up, and currently lives in Glendale. “There’s always been a notion that neighborhoods like Glendale have to be ‘protected’ from the rest of the city. Coded in that is the idea that the people it needs protecting from are poor, mostly black and brown people, immigrants and the homeless.”

Councilmember Holden came out of the property-owners movement; for decades he ran the Juniper Park Civic Association in Middle Village. Originally a Democrat, he ran as a Republican on an anti-shelter platform in 2017, beating incumbent Elizabeth Crowley after losing the Democratic primary to her. Crowley was hardly pro-shelter, but her political pragmatism led many in the district to view her opposition as not strong enough. Holden says the Cooper Avenue site should be used as a school for special-education children.

In April, one homeowner group, the Glendale Middle Village Coalition protested outside a Long Island synagogue whose president is the landlord of the Cooper Avenue site. Though Holden, a former member of the coalition, condemned the protest, its organizers praised him while condemning his fellow Queens Councilmember Rory Lancman, who criticized the rally.

Praising the involvement of his “many Jewish neighbors” in his anti-shelter drive, Mike Papa, one of the organizers, told the Queens Ledger that Lancman was “probably just using this situation to get his name in print.”

“I will not allow him to turn this peaceful rally to promote a plan sponsored by our District Councilman Robert Holden to build a school for handicapped children in our community into another fabricated case of anti-Semitism,” Papa added.

Shelter opponents often tout the “school” — which Holden claims Mayor Bill de Blasio personally promised him and which the city denies it has any plans for — as an alternative to the shelter.

Papa, a grandfather and 25-year Teamster truck driver, told The Indypendent that he now thinks the synagogue picket was “stupid,” and that it wasn’t his idea, although he did say he scouts locations for the group’s protests.

He is convinced the planned shelter will be a “halfway house,” which will bring in “sexual offenders” and other delinquents loosed on to society by recent criminal-justice reforms such as the reduction of bail requirements and the treatment of minor offenses like littering as civil rather than criminal violations.

“There aren’t really going to be any crimes left that are arrestable offenses,” Papa says. “There are going to be thousands of people hitting the streets coming out of jail.”

He has little trust in the motivations of the company slated to run the facility, the nonprofit Westhab, which as this issue went to press was scheduled to have a city review hearing for a $61 million contract with the Department of Homeless Services (DHS) at the Cooper Avenue site. “You look up every single person on their executive board,” Papa says, “and they all sit on the board of one or another real-estate development corporation. That’s what this is all about.”

Housing and tenant activist Rob Robinson of the National Economic and Social Rights Initiative acknowledges that there are many problems with the “shelter-industrial complex” that Glendale residents like Papa denounce.

“By putting people in shelters, you’re not getting to the root cause of the problem,” he says. “People deserve a place to go, a place to stay versus the street, the subway. [But] it’s not a long-term solution. It’s just a temporary solution.” Robinson is adamant, however, that there is a difference between criticizing the shelter system and making excuses for keeping homeless people out of neighborhoods. “If everybody is saying, ‘Not in my backyard,’ what do you do with these people?”

The de Blasio administration’s “Turning the Tide on Homelessness” plan to place homeless shelters across the city was designed to distribute them more equitably, instead of building more shelter beds in the same neighborhoods in the Bronx and Brooklyn. The plan also intends to have shelters give priority to people who lived in their neighborhoods before they became homeless. In Queens Community District 5, that would mean people like Arkadiusz Jasinski, a 44-year-old unemployed construction worker who froze to death on a Ridgewood sidewalk last November.

At the October community board meeting where calls were made to burn the shelter down, Raquel Namuche of the RTU urged the crowd to push for affordable housing as the solution to homelessness. She was immediately shouted down.

The very presence of tenant organizers at a Community Board 5 meeting signifies a major change for Ridgewood, Glendale and Middle Village.

A neighborhood newspaper, the Ridgewood Times (now the Times Newsweekly) once railed against welfare recipients, and after 9/11, regularly floated the idea of internment camps for Muslims. Following the 1977 blackout, when heavy looting and arson occurred in Bushwick, it called for more “civic involvement” in white Ridgewood and the surrounding neighborhoods that would “turn back the tide” of chaos from a few M-train stops west. “[I]f Ridgewood falls, it will precipitate a domino effect, which will spread to Glendale, Maspeth and Middle Village,” it warned.

These days, the Times Newsweekly condemns the behavior of the anti-shelter crowd, and recently ran editorials by RTU members making the kinds of arguments about homelessness Namuche was shouted down for.

Glendale has also changed. Like the rest of Queens, this once majority-German neighborhood has diversified. But while the borough itself is one of the most ethnically varied places on Earth, Glendale is still 56 percent white (a 29 percent decrease from 1990). It is still less than 2 percent black, but the Latino population is now 37 percent and growing.

“Glendale is a lot more than what the anti-shelter crowd has made it seem to be,” says Caty Seger. “It is more diverse, in all ways, than what is usually seen.”

She emphasizes the need for “stronger and more comprehensive rent control,” pointing to the large number of illegal apartment conversions, where homeowners rent out a second floor or basement, throughout the neighborhood.

These units often fall into disrepair, Seger says, and tenants living there without a lease can be easily evicted. “This creates unsafe living conditions for families who don’t always have the power or legal protections to fight back for better housing. There is a great need for housing justice in Glendale, and that includes fighting for our homeless neighbors.”

Rob Robinson became homeless after losing a job, living first on the streets of Miami and later in a New York City shelter. He acknowledges that neighborhoods considered liberal, such as Chelsea and the Upper East Side, have also opposed shelters, while the opposition in west-central Queens arises from more of a working-class viewpoint.

“In a place like Glendale [people think], ‘I worked hard to get my home, you need to work hard to get yours,’” he says. But he adds, “there are folks working for the city, working for Transit, that are in shelters, people working for HRA [the Human Resources Administration] that are in shelters. We have a big problem in this country, and the wages aren’t rising as fast as rent. People are rent-burdened, and eventually, that leads to problems like homelessness.”

In mid-October, Community Board 5 voted to reject the Cooper Avenue shelter, but that vote is only advisory. The DHS has made clear that it will be moving forward with the project. When the shelter comes to Glendale, homeowners are unlikely to stand down, and we can only wonder what type of reception homeless New Yorkers can expect from the neighborhood.