I’m writing these notes in early November as fires rage across California. I’ve just returned from supporting family of mine living north of San Francisco. They lost power when 60-mile-an-hour winds crashed a giant tree onto Pacific Gas & Electric power lines and were evacuated to avoid the threat of wildfire. The cause? Climate chaos and an unregulated for-profit corporate utility — in both cases corporate capitalism’s grab for wealth and power that has wrecked our planet, setting our world ablaze in California, Central Africa, the Amazon and elsewhere.

This is the nightmare of rampant corporate capitalism we warned of and pushed back against 20 years ago this month in Seattle. We confronted the World Trade Organization and its attempt to further write the rules of the global economy and concentrate power and wealth in the hands of the few while neutralizing people’s resistance movements. WTO used euphemisms like “economic globalization” and “free trade” but those words disguised the poverty, misery and ecological destruction of the capitalist system.

We are surrounded by current examples of people power winning change — from the teachers’ strikes to the climate strikes, from Ecuador last month to Puerto Rico last summer. Now seems like an important time to reflect on the struggles — 20 years ago and today — that show that when we organize, have some strategy and rebel, we can build power and win change.

PUBLIC UPRISING AGAINST THE WTO

In the days after the mass direct action at the WTO summit, I wrote this description:

On November 30, 1999 a public uprising shut down the World Trade Organization and took over downtown Seattle, transforming it into a festival of resistance. Tens of thousands of people joined the nonviolent direct action blockade which encircled the WTO conference site, keeping the most powerful institution on earth shut down from dawn till dusk, despite an army of federal, state and local police shooting tear gas, pepper spray, rubber, plastic and wooden bullets, concussion grenades and armored vehicles. The Washington National Guard’s 81st Infantry Brigade, 1-303 Armor Battalion, and the 898th Combat Engineer Battalion [were] deployed.

People continued to resist throughout the week despite a clampdown that included nearly 600 arrests and [a] declaration of a “state of emergency” and [the] suspension of basic civil liberties in downtown Seattle. Longshore workers shut down every West Coast port from Alaska to Los Angeles. Large numbers of Seattle taxi drivers went on strike. All week the firefighters union refused authorities requests to turn their fire hoses on people. Tens of thousands of working people and students skipped or walked out of work or school. Solidarity action took place on every continent across the world.

The city’s police chief, Norm Stamper, told the Seattle Times: “There were those who were saying they would shut down the city of Seattle, and they managed to do that today.” 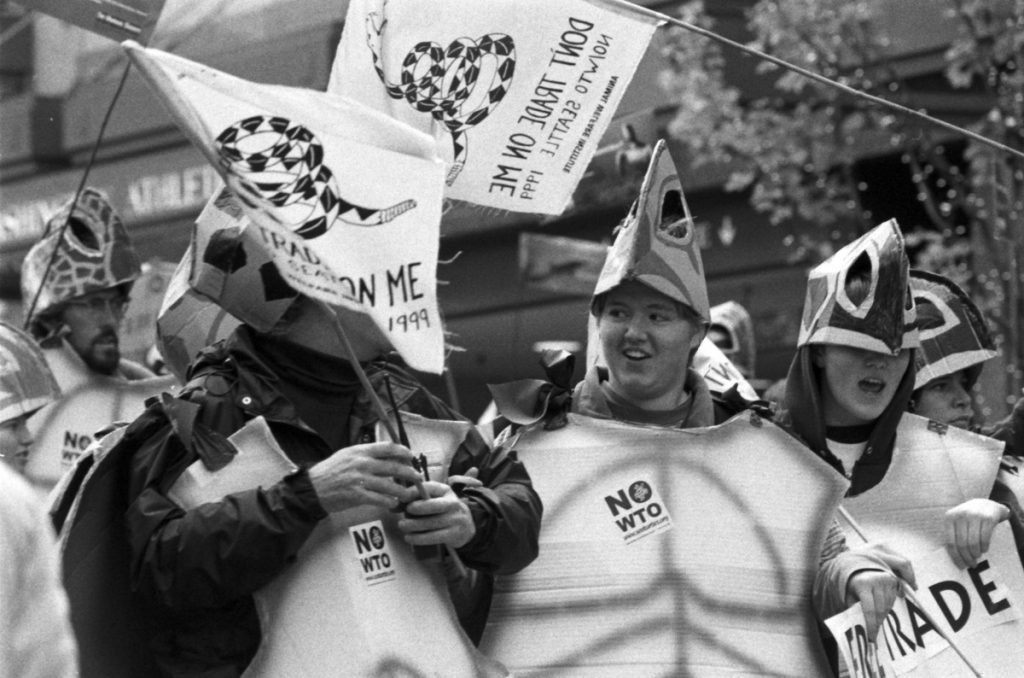 TURTLE POWER: Some of the aquatic life that marched with the Teamsters at the Battle of Seattle. Photo: Seattle Municipal Archives.

The next day thousands of us defied their martial law and took to the streets and hundreds were arrested and attacked. People stayed in the streets — and remained in jail by the hundreds — all week until Dec. 3, when the WTO talks collapsed as representatives from poor countries, bolstered by public rebellion and pressure from movements in their home countries, refused to buckle under. The 1 Percent’s plan to rule the world’s economy through the WTO was scuttled, as we in the United States joined the global rebellion against neoliberal, corporate capitalism.

People across the world stood with us in solidarity, coordinated through People’s Global Action, a network initiated by the Zapatistas, the indigenous rebel group in Chiapas, Mexico whose 1994 uprising targeted the North American Free Trade Agreement (NAFTA), which they called a “death sentence” for their communities. While we marched in Seattle, thousands of farmers from Karnataka, India marched to Bangalore, and over a thousand villagers in the country’s Narmada Valley held a procession. Thousands took to the streets in the Philippines, Portugal, Pakistan, Turkey, South Korea and across Europe and North America. 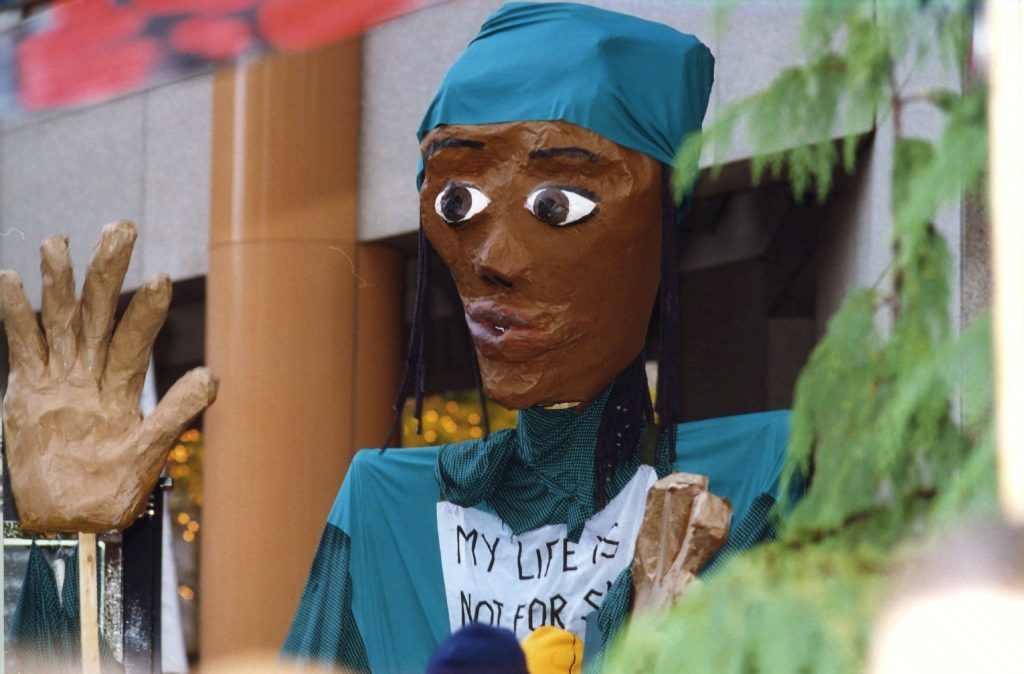 Puppetry played a large part in the messaging at the WTO protest. Photo: Steve Kaiser.

There’s much to be learned from the successes and mistakes of the Direct Action Network, the group that organized the mass nonviolent civil disobedience that filled the streets of downtown Seattle.

One thing we did well was centering the arts in our education, organizing and protests — and scaling it up to fill the streets with art, song and theater, as the authorities filled the streets with riot cops, teargas, and National Guardsmen.

The spread of arts organizing is one legacy of the Direct Action Network’s effort to create new forms of resistance. Today we see mass art builds to prepare for teachers union strikes and the widespread use of arts organizing in the climate justice movements.

Our commitment to fusing art and organizing followed years of experimenting. In 1999 a network of art and revolution street theater collectives formed the Direct Action Network. We put everything we had learned at the center of our education, organizing and direct actions.

We toured up and down the West Coast with our Art and Revolution Street Theater troupe, joined by former Saipan sweatshop worker and organizer Chie Abad and David Reid, a locked-out Kaiser Aluminum worker. We used song, dance, puppetry and theater to convey the real-life stories of David and Chi, explaining why we needed to protect our communities from the WTO. We would follow these performances with art-making and nonviolent direct action trainings for people who would later join in the Seattle shutdown.

In the weeks before the WTO protests, we set up a mass “convergence” art-making space in a warehouse — also used for training, meetings, food and medical support — that involved hundreds, and supported groups making the art they needed for the streets.

Tens of thousands of people will converge on Seattle and transform it into a festival of resistance [and] mass nonviolent direct action… [R]eclaim the streets with giant street theater, puppets, celebration, music, street parties and pleasure; vibrant sounds of community, creativity and resistance and glimpses of life as it could be in the face of hundreds of deadening businessmen, bureaucrats and politicians. Street theater used as a tool for making social change can break into people’s consciousness, communicate powerfully and capture the imagination of participants and observers.

There is an incredible opportunity to use street theater — art, dance, music, giant puppets, graffiti art and theater — and nonviolent direct action to simplify and dramatize the issues of corporate globalization and to develop and spread new and creative forms of resistance. This will help catalyze desperately needed mass movements in the U.S. and Canada capable of challenging global capital and making radical change and social revolution.

There is still an incredible opportunity — and an urgent need.

David Solnit is an arts organizer and editor of Globalize Liberation: How to Uproot the System and Build and Better World and The Battle of the Story of the Battle of Seattle. He and a few other Direct Action Network founders and organizers are sharing reflections and stories of the Seattle WTO shutdown launching in mid-November at ShutdownWTO20.org.