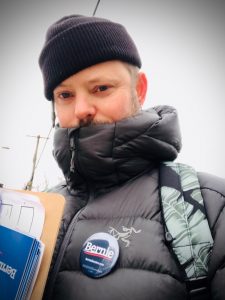 CEDAR RAPIDS, IOWA — After New Years, I joined a crew of friends who came from Seattle, Pennsylvania and New York to get out the vote for Bernie Sanders. We rented a house, bought groceries, and bundled up to knock on doors together in the Iowa winter.

Cedar Rapids is the second-largest city in Iowa. I was planning to stay here for a week. On the third day, my turf is a small working-class neighborhood of trailer homes. The very first person I talk to is a West-African woman. A mother of three. She’s quiet. Chill. She’s down with Bernie and planning to caucus. LETS GO! I plant a Bernie sign in her frozen front lawn.

Four doors down, a white, middle-aged general contractor isn’t planning to caucus. He only votes in the general. He’s leaning Biden but likes Bernie. His main concern is beating Trump. Let’s talk about it, I say. That’s my main concern too. We have to defeat Trump and Bernie is the safest bet. He’s 100 percent pro-worker and voted against NAFTA. He stood against the Iraq War. He’ll carry the Rust Belt. He has wild enthusiasm and he’s surging in the polls.

This conversation lasts 30 minutes. The Iowa Nice thing is real. People are authentically friendly here. They’re down to engage and talk it through. This is my vacation I tell him. I’m in from New York City because this is important. Iowa has the power, you have the power to boost the candidate with the best chance to defeat Trump. You can replace him with someone who is funded and powered by us, who helped fight and win a $15-per-hour minimum wage for Amazon and Walmart workers. Whose most frequent donors are these same Amazon and Walmart workers. Who has a volunteer army working every day to win. This candidate will never sell us out. So, what do you think? Will you caucus on Mon Feb 3 at 6:30 p.m.? You just go to the church nearby and spend an evening with your neighbors.

Biden’s support is just left over shine from Obama. No one really likes him.

And then… he’s all in! He’s with it. He likes the logic. It was headed this way from jump. Biden’s support is just left over shine from Obama. No one really likes him. But still, I can’t believe it. He will caucus and wants a yard sign. He’ll bring some friends. LEEEEET’S GO! I walk next door and knock on his neighbor’s door. He’s home with an injury. He’s on disability. He was also only planning to vote in the general. Not anymore. He’s ready to rock. BAM! Another yard sign.

That’s three Bernie yard signs in a row, proudly on display in a small, high-density working-class neighborhood. I enter all three neighbors as ready to caucus into the campaign app on my phone. I collect commit cards from all of them. The campaign will prioritize following up with them to make sure they show up to caucus.

Earlier at the Cedar Rapids field office, I was told that in 2016 Bernie lost some precincts by two or three people and in the end lost the state to Hillary Clinton by less than half a point. So yeah, this feels amazing. Intoxicating. It’s one of those rare moments where you can feel the ripple effect of your actions and somehow know that the little part that you’re playing can have a big impact. With less than three weeks to go before the caucuses, 58 percent of potential caucus goers are still undecided or wavering in their support for a candidate. We are changing that one conversation at a time.

At the end of the day, I swap stories with other volunteers. We share pitch strategies and build bonds. It’s a rush to volunteer for a surging campaign — a campaign that keeps winning support from movement formations like the Sunrise Movement, unions like the Las Vegas teachers union and righteous grassroots orgs like the Center for Popular Democracy. The wind’s at our back. And I’m all in. I’m staying. I’ve cancelled my plans. I’ve found housing with friends. I’m clocking some hours doing remote work to pay the bills. The rest of the time, I’ll be here, knocking on doors and making phone calls until Iowa votes.

If you’re considering throwing down for Bernie, do it! Don’t hesitate. Every little bit matters. Grab some friends, get on the phone and talk to people, or come to Iowa or another early state. Let’s go!