In December 2018, Assemblymember Richard Gottfried, the veteran Manhattan Democrat who sponsored both the state’s 1977 pot-decriminalization law and its 2014 medical-cannabis measure, said that the debate on legalization was no longer “about whether to allow adult use, but how to structure the industry.”

But that debate was what tripped up legalization legislation last year, with two separate bills — the Marijuana Regulation and Taxation Act, sponsored by Assembly Majority Leader Crystal Peoples-Stokes and state Sen. Liz Krueger (D-Manhattan), and Gov. Andrew Cuomo’s Cannabis Regulation and Taxation Act (CRTA) — offering different versions of that structure. Cuomo dropped his proposal from the state budget and the Krueger/Peoples-Stokes bill never made it out of committee.

The key differences remain on “community reinvestment” and “equity.” In other words, on whether a piece of ganja-tax revenues should be earmarked for the largely black and Latino urban areas where petty pot busts were concentrated, and how much state regulations should give the inner-city residents, small-time dealers, and rural hippie growers who took the brunt of prohibition a leg up in getting into the legal pot business, rather than have it dominated by wealthy investors. 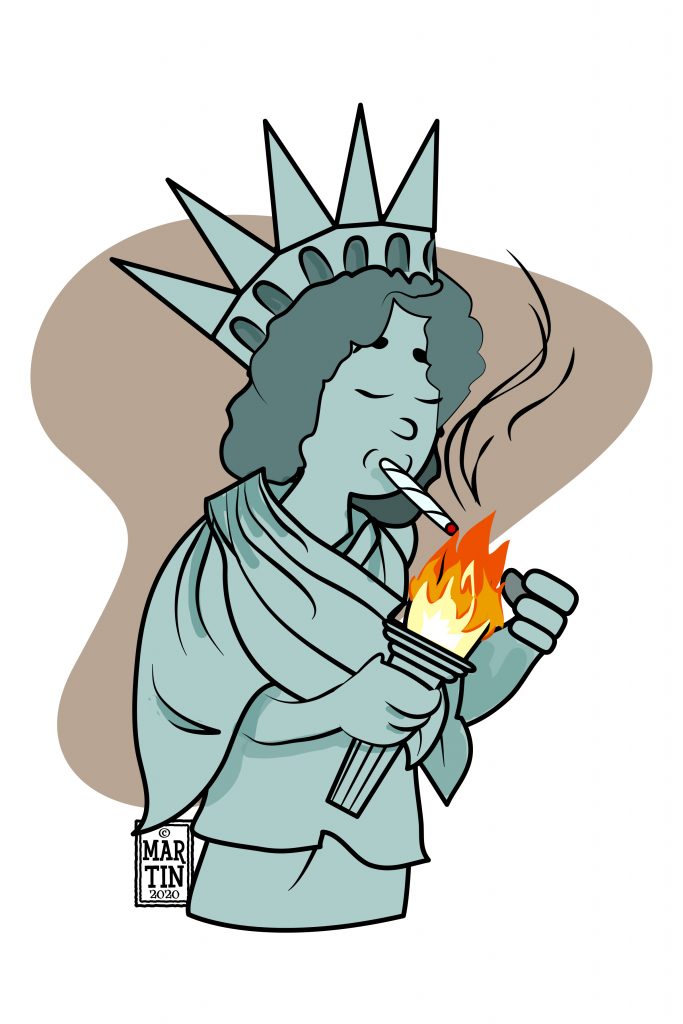 Gov. Cuomo’s revised Cannabis Regulation and Taxation Act, included in the state budget he unveiled Jan. 21, would recommend but not require community reinvestment, says Krueger. In contrast, the Marijuana Regulation and Taxation Act (MRTA) is “very explicit” about how revenues should be used for education, treatment and “money for communities of color most affected by the War on Drugs.”

“We feel that we cannot let go of that fundamental part,” she adds.

A spokesperson for Peoples-Stokes said that her staff was still pouring over the governor’s 230-page bill, but “community reinvestment is the biggest deal for the Majority Leader.”

“We are pleased to see Gov. Cuomo’s commitment to passing comprehensive marijuana legalization in the state budget this year and to see him include social equity and small-business incubator programs,” Kassandra Frederique of the Drug Policy Alliance said in a statement. But she was “disappointed” that his bill doesn’t clearly guarantee a portion for community reinvestment. “Legislation must include specific language to resolve the devastating collateral consequences of marijuana prohibition in the fields of housing, employment, child welfare, and immigration,” she added.

A spokesperson for the governor’s office said his CRTA bill was designed to provide “flexibility in implementing a social and economic equity plan that adapts to industry needs and encourages participation from individuals disproportionally impacted by the War on Drugs.”

The governor’s budget projects that taxes on legal marijuana sales will bring in $20 million in fiscal year 2021 and $63 million in 2022. It would tax cultivation at the rate of $1 per gram of bud and retailers would pay 20 percent on what they purchase, with one-tenth of that going to local governments.

The CRTA would allow very limited home cultivation for medical use. Certified patients or their caregivers would be able to apply for permission to grow up to four plants. Cities with more than 100,000 people and counties would be allowed to prohibit retail sales. It would also attempt to set standards for driving while high and require licensed businesses not to interfere with union organizing and to ban gambling on the premises.

Krueger cautions that if legal marijuana is overtaxed, customers will stay with the illegal market. For example, Massachusetts’ 20 percent tax means 1/8 ounce sells for $60 — the black-market price of $50 plus $10 tax. The point, she explains, is for people to buy pot that is “pure and safe and documented,” rather than a vape cartridge that contains Vitamin E acetate, an adulterant that condenses back into oil in the lungs and is believed to be the cause of 60 vaping-related deaths and more than 2,600 hospitalizations in the past year.

Both bills would follow the model New York State uses for alcohol, requiring separate businesses for production, distribution and retail, with exceptions for “microbusinesses.” This would help smaller entrepreneurs, Gottfried says: While alcohol manufacturing is dominated by large corporations, retailers are mostly independent businesses and the state bans chain liquor stores. The CRTA would limit owners to three retail stores.

Legalizing marijuana for pleasure, however, might undercut the state’s medical-marijuana companies, which are vertically integrated and thus mainly national chains such as MedMen, PharmaCann and Vireo that could afford the seven-figure startup costs required. Under restrictions Cuomo insisted on in 2014, they are only allowed to sell cannabis extracts.

The CRTA would allow their dispensaries to sell marijuana buds, which would be cheaper and more efficacious for many patients. It would also authorize the state to auction off licenses for them to open pot stores, exempt from the three-shop maximum.

The CRTA, however, would not expand the limits on what conditions doctors can recommend cannabis for. No other controlled-substance medication has such restrictions, Assemblymember Gottfried points out. If recreational marijuana were legal, he adds, people with ailments not on the approved list could simply buy it from a pot store, a situation he says “does not make sense.”

A bill to remove those restrictions, sponsored by Gottfried and Sen. Diane Savino (D-Staten Island) passed the Assembly Health Committee last year, but did not get a floor vote.

A related issue is expunging marijuana-possession convictions. The Legislature passed a bill to do that last year, part of the last-minute measure enacted to close the “possession in public” loophole in decriminalization that had enabled more than 600,000 arrests over the previous two decades. (New York City police had deemed pot they found in someone’s pocket during a stop-and-frisk “public,” making it a misdemeanor instead of a violation.) But “the state has not expunged the records yet,” says Krueger.

The problem appears largely technical, she explains, but the difference is whether the state court-administration and criminal-justice agencies automatically expunge convictions, or just send letters to some 300,000 people informing them that they can apply to have their convictions expunged. This is important, she adds, because it would clear the way for “people running a small business with an illegal product” to become part of the legal trade.

Gottfried says he was “overoptimistic” last year, as a number of legislators opposed legalization, most prominently first-term Democrats from New York City’s suburbs. Some are now more favorable, he adds.

Senate Alcoholism and Substance Abuse Committee chair Pete Harckham, a Democrat who represents northern Westchester and the Hudson Valley, last year argued for delaying legalization, but announced his support for the MRTA on Jan. 23, saying that money from pot sales should go to “social good.” He told the Buffalo News that in visiting Massachusetts, he’d learned that “the sky is not falling” — and noticed the number of cars with New York license plates in pot-store parking lots.