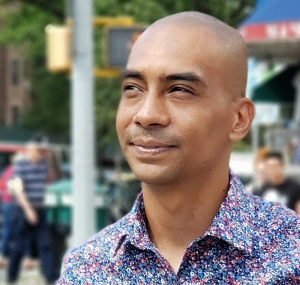 Our nation finds itself teetering on the precipice of another endless war yet again. Dizzy in our premonitions of bombing, carnage and the human cost that will be paid, we place the blame at the feet of our Commander in Chief. While President Trump acted without the formal consent of Congress, his usual cadre of Republican enablers are not the only ones who will wipe the blood of Iranian children and American soldiers from their hands onto the pages of history.

A contingent of Democrats in Congress, one of them my opponent in the primary race for New York’s 6th Congressional District, Grace Meng, helped pave the way for a reckless president to carry out an even more reckless foreign policy.

I will not permit a future where our children gaze in horror at screens counting down the remaining heartbeats between us and nuclear armageddon.

From undermining the Iran Nuclear Deal at every turn to vastly expanding Trump’s military budget, these Democrats have aided a knowingly corrupt administration while hiding behind process and political doublespeak. They obfuscate their complicity while retaining their grip on power. Bought and paid for by tens of thousands of dollars from the very same defense contractors who have seen their stocks soar, they oppose Trump in public, yet vote for his interests in practice.

I am running for Congress because of the real and present danger posed by a future where these elected officials are not unseated. I will not permit a future where my children might be sent to war, where they gaze in horror at screens counting down the remaining heartbeats between us and nuclear armageddon. My children will never benefit from the policy decisions made by the Grace Mengs of the world. But Grace Meng and Donald Trump have. So let me tell you how they did it.

Perhaps the easiest piece of Grace Meng’s slipshod voting record to understand is her peculiar opposition to the Iran Nuclear Deal. The Iran Nuclear Deal was a hard-fought agreement between the United States, the United Kingdom, France, China, Russia, Germany, and Iran. The agreement lifted billions of dollars of crippling economic sanctions in exchange for the dismantling of Iran’s nuclear program.

Iran was required to give up 98 percent of its enriched uranium. The remainder of which Iran was only permitted to enrich up to 3.67 percent for energy purposes. For reference, research-grade uranium is enriched to 20 percent, while weapons-grade uranium is enriched to 90 percent. Iran agreed to a reduction of its centrifuges from approximately 20,000 to 5,000. This small number of remaining centrifuges were permitted to be used for fissile material for energy and research.

Finally, Iran acceded to an unprecedented inspection program so stringent one arms control expert described the likelihood of it being caught should it violate the agreement as “nearly 100 percent.” In exchange for a program that prevented Iran from becoming the next Libya or North Korea, the United States would lift international banking, finance and trade sanctions that left 77 million Iranians suffering, half of whom were struggling to pay for adequate food and shelter.

Beyond being a potent impediment to Iran’s development of a nuclear weapon, the Iran Nuclear Deal served to help stabilize relations between Iran and the West. Regardless of the many human rights abuses and the crimes of the Iranian regime, continued tension and escalation toward war served neither the interests of Americans or Iranians.

Blind to logic or bought by special interests, Grace Meng became one of the first Democrats to break with the party in 2015 and vocally oppose the agreement, bafflingly saying it did not go far enough. She joined only 24 other Democrats and every Republican member of the House in a final vote to oppose it.

Meng has spent nearly her entire tenure in Congress opposing the Obama administration’s attempts to stem Iran’s ability to produce a nuclear weapon.

Once the deal was in place, despite her failed attempt to prevent it, Meng repeatedly voted to undermine it. In 2016, she eschewed her caucus and voted with Republicans on the “Iran Leadership Asset Transparency Act,” an effort to intentionally undermine the deal by creating what Democrats called “backdoor sanctions” on Iran. Democrats voted overwhelmingly against the bill, and progressive Jewish advocacy groups, such as J Street, also conveyed their opposition to the act. The measure hindered the U.S.’s ability to enforce the nuclear deal and ultimately made “America and our allies less safe and redound to the benefit of the very Iranian hardliners who seek to do us harm,” J Street argued.

When the same bill was reintroduced in 2017, she voted “aye” again, this time alongside steadfast Trump-supporting Republicans, while progressive and moderate Democrats alike voted “nay.” Former President Barack Obama warned the bill “would incentivize those involved to make their financial dealings less transparent and create a disincentive for Iran’s banking sector to demonstrate transparency.”

Grace Meng has spent nearly her entire tenure in Congress opposing the Obama administration’s attempts to stem Iran’s ability to produce a nuclear weapon. Even with the ascension of the Trump administration, which poses an immediate danger to geopolitical stability, Grace has continued to toe the Republican party line.

Ever inept, President Trump during his 2019 State of the Union lied to the American people about the effect that the reimposition of sanctions was having on Iran. Claims representatives of the intelligence community rebuffed, saying “continued implementation” of the deal — despite Trump’s withdrawal from it — “has extended the amount of time Iran would need to produce enough fissile material for a nuclear weapon from a few months to about one year.”

While most Democrats derided President Trump’s State of the Union address. Meng continued her heedless appeals for bipartisanship with the decidedly unhinged and irresponsible administration stating: “President Trump addressed the American people this evening and spoke of a new era of bipartisanship coupled with lofty policy goals. I believe Democrats and Republicans can and should work together.

“I stand ready to work with the president,” she added.

In reality, Grace Meng has no need to work with President Trump because she has already completed the job she was paid to do. She repeatedly undermined Obama and laid the groundwork for the withdrawal and dissolution of one of the most crucial agreements in the history of the Middle East.

However, despite the withdrawal of the United States from the Iran Nuclear Deal and reimposition of crushing sanctions, Iran had so far held their end of the bargain in hopes for an ascension of a more responsible American regime. Sadly, enabled by a shameless Republican party and a group of morally bereft Democrats, President Trump’s assassination of Qasem Soleimani was the straw that broke the camel’s back.

Promising retribution for the killing of the Iranian equivalent to the president’s national security advisor, Iran has officially withdrawn from all aspects of the nuclear deal and is resuming its nuclear program. Iraq has voted to expel all U..S troops, and U.S. operations against ISIS have been suspended. Thanks to President Trump and Democrats like Grace Meng, our world is not only less stable and therefore more dangerous, it is also one step closer to nuclear war.