They’re brewing our coffee, netting our fish, shoveling snow from our sidewalks. They rise before the sun and are at it long after the last lamp blinks awake along Broadway. You might overlook them — that hooded figure salting your path, that arctic explorer on an electric bicycle. They are overwhelmingly recent arrivals who have come to this city of 8 million to carve out a life in the ice and concrete of its streets. They give this town legs, set it in motion, help its skyscrapers stand tall, wipe away its trash and imbue it with beauty.

This January, The Indypendent spoke to some of the people who perform the often thankless task of working in New York’s great outdoors through the winter. Here’s what they had to say (edited for clarity and concision).

I’ve been commercial fishing all my life with my father. He’s been a commercial fisher for, God, 54 years now. He was originally a potato farmer out in Calverton on the east end of Long Island but he left farming around 1965, ’66. He basically taught me to fish. It was myself and my brother who no longer fishes with us. He got out of the business.

My typical day depends on the time of year, but we go out in this kind of weather, as long as it’s not too windy. This time of year you got to pick and choose when you’re going to go. In the summertime the engine on the boat never gets cold. It’s seven days a week. You’re grinding. 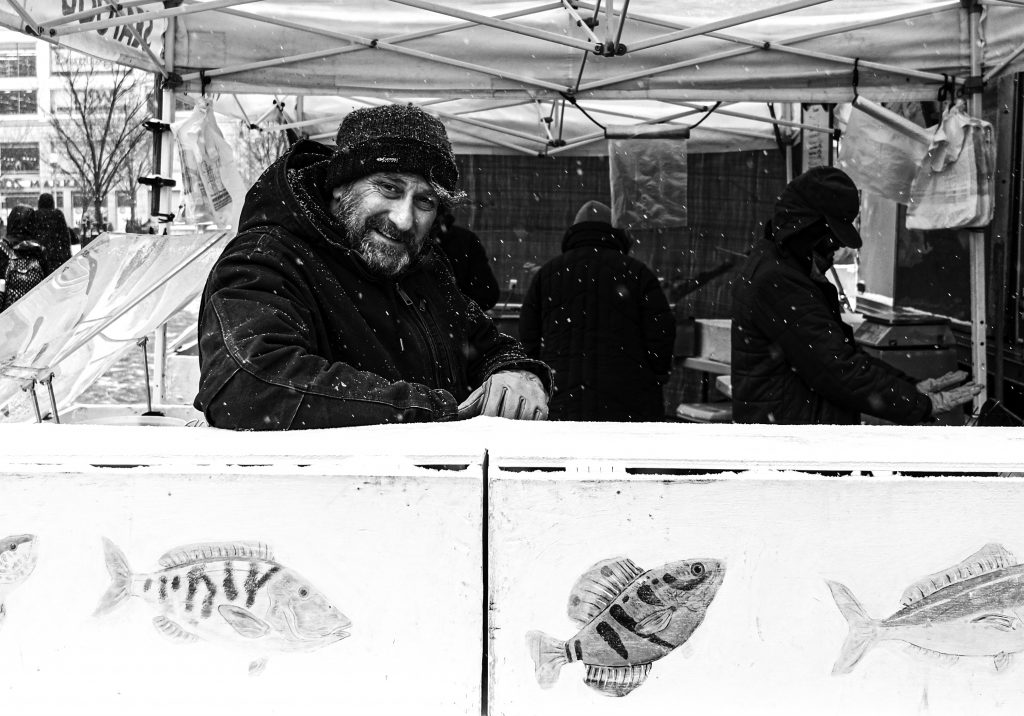 Dragging is basically when you have a large net and you’re pulling it along the bottom or just off of the bottom, depending on what you’re going for. Because we’re such a small operation we don’t really impact the bottom that badly and we’re not killing a lot of species which is great. Unlike a lot of big draggers we’re more sustainable.

You’re up in the morning, you’re out fishing by four-thirty, five o’clock. Depending on how you do, you could be out there till noon or you could be out there till five. Although, sometimes we don’t even leave the dock until we do something called a “sunset tow.” You wait until the sun starts going down and then you go night fishing. I do a lot of striped bass fishing at night. That’s when they’re more prevalent.

Fishing is labor-intensive work. We cut everything and get everything ready for the market, which is a job in itself. We have our ice machine, coolers, stuff like that. We load it all up. I was up this morning at three, on the road by four. We’re here at the Union Square Greenmarket by five-thirty and we’re selling by seven. At a quarter to seven, the diehards show up.

My tip for keeping warm outdoors in the winter is layers. Layers, layers, layers. It’s different for everybody. I know for me, if my feet get cold, I’m done. I try to keep my feet warm as I can, try to keep my hands warm. Luckily Aunt Jan here always has pocket warmers. She’s tossing them out to everybody.

Dress in your Carharts. Get your insulated underwear on. I just got into compression socks to help with the standing all day. It helps with the legs. The key is to dress in layers, get something for your face, a wrap or something, and just be ready for it.

I do admit there are times when I’m like, “Damn it, I wouldn’t mind being indoors right now.” But the thing I dig about this job is that tough as it can be in the wintertime, it’s still a job that allows you to have a sense of independence. Okay, I have to stand in the cold. But, hey man, five weeks from now, I’m going to be in Costa Rica and I just got back from Vietnam. In the wintertime, there’s a little more leeway. April through December, you’re balls to the wall.

Catch up with Wade and taste what he’s caught at the PE & DD Seafood stall at Union Square Greenmarket every Saturday. 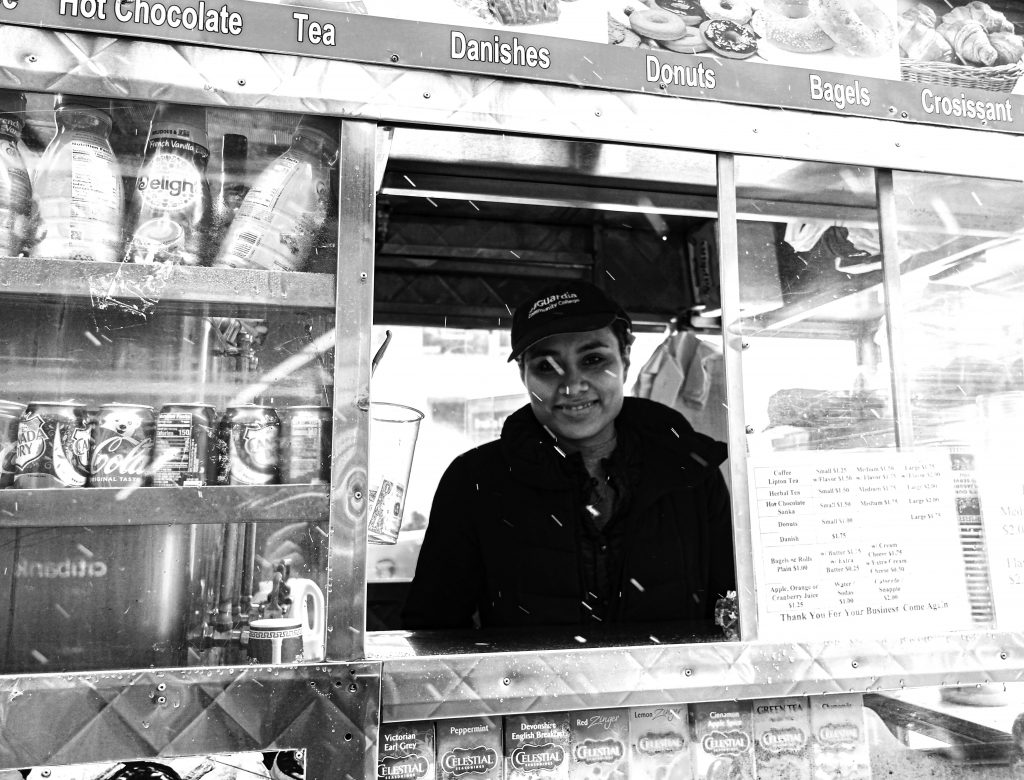 My sister-in-law told me about this job. It’s easy. It’s so slow, but it’s a good job. I like it.

At five in the morning, I start selling coffees and breads. There’s a lot of customers, a lot of Hispanic people coming to work. Most of the people come at around six and it has to be ready every time. I have a lot of regulars.

I have a small heater here, that’s how I keep warm. 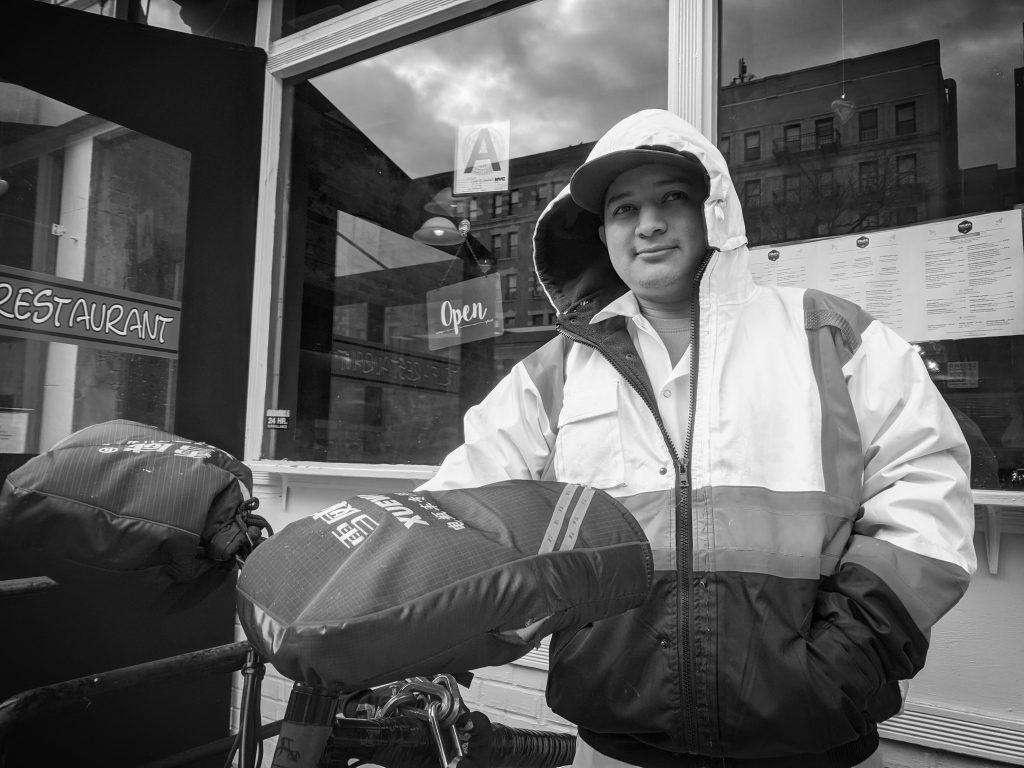 I work at Trufa, a small restaurant at 140th and Broadway. During my 8-hour shift, I alternate between preparing food in the kitchen and making deliveries. It’s difficult when it’s raining or cold outside, but you have to make the delivery. I wear gloves and many layers of clothes and the electric bike helps. You want to travel quickly so the customer gets the food while it’s still warm. The most common orders I deliver are for our hamburgers, sandwiches and pasta.

Some apartment buildings don’t have elevators so I walk up the stairs. If it’s a big building, sometimes it’s hard to find the apartment. Other times, if the customer doesn’t answer the buzzer at the entrance to the building, you have to call or go looking for them.

I’ve been robbed twice in the three years I have been working this job. On both occasions two men would meet me at the entrance to the building, grab the food from me and run back inside. They didn’t try to rob me of my money. They must have been hungry.

Bicycling through all the cars is dangerous, but I’ve only been hit once. I fell to the ground but got up and was okay.

I have a cold today. Going in and out from the warm to the cold causes that. I would like to go home right now, but I need to keep working.

Weekends are the busiest days for making deliveries. Tuesdays and Fridays are my days off. When I am at home and the weather is really bad, I sometimes place an order for delivery. I understand the effort it takes, and I give a good tip.

I am 24-years old. I have been here in the United States for five years. I also have uncles and brothers who are here. I come from the province of Morazón in the north of El Salvador. I send 60 percent of what I earn back to my family that is still there. I want to return there someday to build a house and start my own family. 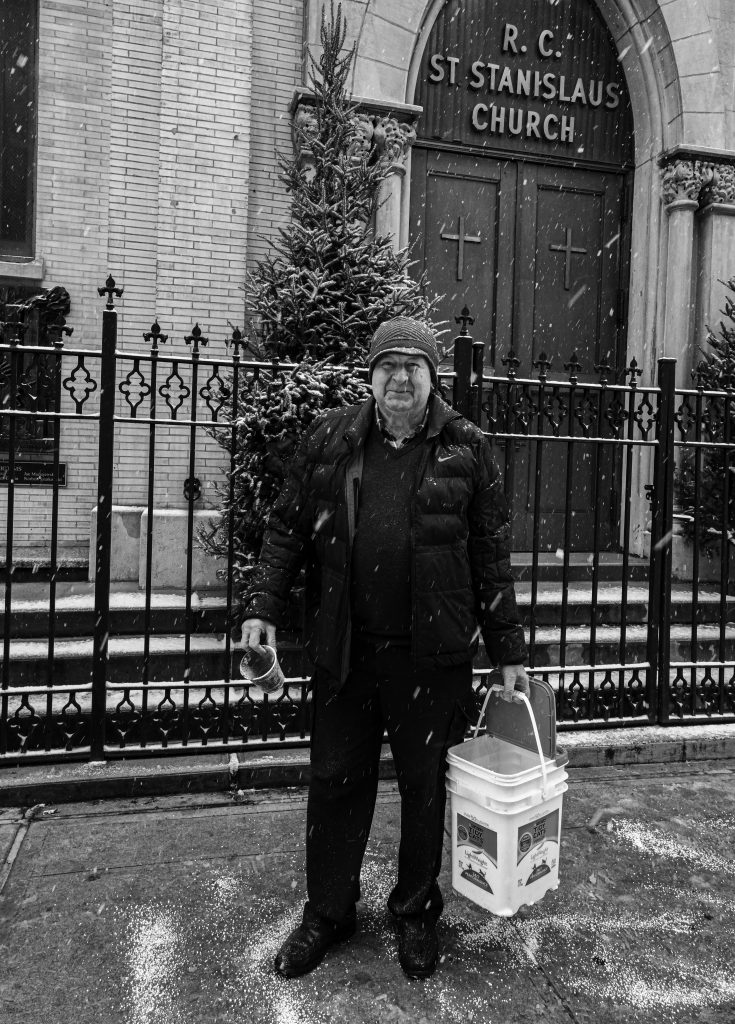 I am from 6th Street. Before that, I am from Poland. Thirty-four years in America. Now I am retired. I help part-time for this church. Before that I worked for Old Dominion trucking company. A very hard job. We made local deliveries — Queens and Brooklyn, the terminal in Greenpoint. Now I take it easy.

I always put the salt on the snow, and shovel when there’s a lot of snow. Today is not bad. It’s only 3 inches — very easy for me. Sometimes, there’s big snow. A couple of years ago, there was five or six feet. It was terrible. This year, last year — very small. It’s nothing. Maybe it’s global warming. Last year, for all of winter the snow only came one time. This year, it’s the second time. How many more times? Nobody knows. God only knows.

I’ve been sculpting probably since I was 14 years old. I was born in Zimbabwe. I’ve been doing stone sculpture, wood sculpting for over 35 years. Sculpting tree stumps is something I’ve always done.

When I went out camping in Colorado or New Mexico and I’d see a stump, I’d always carve it. But these were in the middle of the wilderness, so nobody got to see them. But when I moved to the city, I started doing these. Man, people started paying attention, started taking pictures and posting them to social media.

But there’s this tagger, tagging on my art work. Man, I want to hunt him down. I just want to surprise him while he’s doing it, come up behind him and slap him. That’s a big violation. You don’t tag on somebody’s artwork. Street artists understand: someone’s piece is someone’s piece. The moment you go put your tag on it, that’s fighting words, you know?

I’m leaving these in the street so it’s community property. It’s not mine no more. I can’t take this home. I can’t sell this. I can’t make money out of it. This takes four or five days out of my life. I’d value this piece at probably $3,500 to $4,000 dollars if I was selling this in a gallery. So I’m putting a $4,000 piece in the street for free and somebody comes and puts their little graffiti mark on there. That’s so disrespectful. 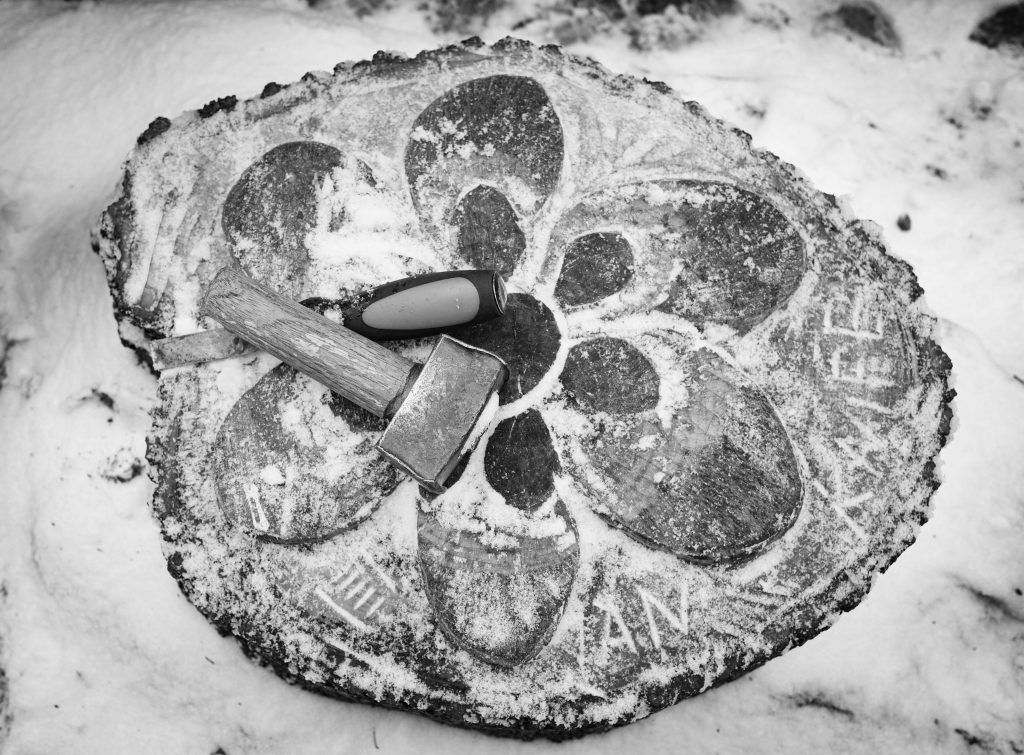 Tree-stump sculpting is just something I do. I’m a visual artist. I paint and I sculpt to make a living. So I’m hoping that people understand that the carvings are my way of giving to the community.

I meet a lot of people. The whole thing sparks conversations. People come by, they see this stump and then all of a sudden there’s a guy who’s sitting there carving it and they want to know what the process is. I was walking by here one day. I saw this stump and thought, “My friends live here. Maybe I’ll just do a piece that they can watch, man. That they can enjoy on their morning stroll every day.”

A lot the designs are determined by the natural shape of the stump. With this stump, you can see it already had this decay in it. That’s the colors. And there’s this green here. That’s the natural color of the moss that grows on it. I just came and started carving and it turned out a flower. I have no clue what I’m going to do when I start.

I’m a political refugee from Zimbabwe. I’ve been involved in a lot of uprisings and demonstrations in Zimbabwe. I got a severed Achilles tendon. That’s from being tortured. They were going to kill me. I fled. I fled home, man. That’s the one place you never think of fleeing. Home is where you want to go to when you face troubles. You don’t want to run away from home, you know? So I’ve been out of Zimbabwe for 28 years now.

Visit IanKnife.com to view Ian’s work. He’s also on Instagram: @KnifeIan. Hit him up, especially if you have an idea of who’s tagging his street carvings.

Unless otherwise noted, all photos are by Martin Mahoney, whose work is on view at the Westbeth Gallery (55 Bethune St.) from March 19–April 19 as part of “The Times” exhibition.