Saturday, Jan 25
We change the polls

CEDAR RAPIDS, IOWA — Alexandria Ocasio-Cortez stopped by the field office today. She stands on a stage of nine cardboard boxes stuffed with Bernie flyers and primes the packed room to knock on doors. Her speech is a warm embrace of fieldwork. It’s down-to-earth and personal. It’s about putting in the time.

“We don’t watch the polls, we change the polls!” she says.

She talks about “mass movement politics” and how it will truly take all of us, not just to win, but to create the sustained militant movement that we’ll need to transform America and the world.

She gives a shout out to James, a Bernie staffer here who was knocking on doors with AOC in Queens a couple years back before anyone knew her name. We’re all smiling. It feels like family.

After a day and a half focused on getting busses of Chicago volunteers to their assigned turf, I hit the streets. Knocking on doors is still by far my favorite part. Strolling, knocking, engaging — behind each door a voter who could be the difference between a revolution and an eco-facist future. I’ve slowed my New York delivery to match the pace here. It helps the initial contact flow into a conversation. Still, nothing’s better than the random personal connection.  A woman walking a massive akita is a bar owner — me too! The mom, white hoodie up, smoking in her icy driveway is from Brooklyn — me too! We talk. They will caucus.

130,000 doors were knocked on over the weekend in Iowa. Bernie and AOC held huge rallies. Two buses from Chicago swelled our ranks in Cedar Rapids and we doubled our door-knocking goals. We’re exhausted. And exhilarated.

The Trump supporter was in his 60s. His house is grand. He’s friendly, and passes me to his 20-year-old son who likes Bernie. Oh, I want this one.

We’re deep into GOTC — Get Out the Caucus. Less persuasion, more confirmation. Place, time, transportation. Check. Can you rally friends and family? Check. With the list focused on likely Bernie supporters, many more ready residents are at the door. Still, there are souls that need saving. There’s no more time to waste. “Can we get you to commit to caucus for Bernie?”

This week I’ll knock on doors at night and take as much as I can off the plates of the field staff. They are the engine driving this operation. A big part of their jobs is to make volunteers feel valued. I’ve been here almost a month, I’m ready to return the favor.

My chest gets tight even thinking about it. Monday’s caucus is six days away and Bernie’s surging campaign is giving focus to his enemies. The Des Moines Register endorsed Warren. Headlines like “Bernie Can’t Win,” “Bernie Sanders Trump-like campaign is a disaster for Democrats” and “Oh My God, Sanders Can Win” flood the internet, attacking his character and electability. The New York Times endorsed Klobuchar and Warren while comparing Bernie to Trump. The elite media’s inability to understand populism and social movements locks it into a left/right frame while ignoring what’s rising up from below. This allows them to conflate a protofascist with a movement leader. This trash is firing up our base. Six days. Tick… fucking… tock.

I couldn’t sleep last night. I moved into new-supporter housing. I’m off the shared floor space and camping mat and in my own room. I’m missing the barracks. Five days to go! Christ. Time to drink this coffee and get at some lawn signs. Four hundred lawn signs were waiting to go out. This isn’t a campaign priority, but our volunteer crew thinks these are gold for ensuring commitment and broadcasting electability. So, we’ve been taking time to get these in the ground. I rocked this for a day, but Logan, my partner in crime out here, has been relentless. Jeep stacked with signs, 4-wheel drive activated, he’s been bombing through the snowy streets every morning. I think he’s single-handedly delivered and placed over 300 yard signs. Most of the work we do out here increases production, many hands make many voters. This work is added value.

Cracks are emerging in the Southern firewall. Bernie has pulled to within two points of Biden in Texas and five points in South Carolina. Here in Iowa, volunteers are pouring in from LA, Chicago, San Francisco, New York, Michigan and St Louis. I’ve heard that the campaign is asking new volunteers to go to other states.

It’s 7 p.m. I’m at the doors. Where the hell is everyone tonight! I’m caffeinated and ready to spread the word. The houses are dark. I swipe left on the app. Not home. My one success was the son of a Trump supporter.

Trump supporters often break from “Iowa Nice.” I’ve had doors slammed in my face. White faces, red-cheeked, stammering, angry, telling me to go away. Once, I was mistakenly invited into a trailer. It’s small with low ceilings. A single exposed bulb lights the interior. I’m inside, expecting fertile, friendly ground. A man wearing blue- and white-striped herringbone coveralls is eating dinner.

“What the hell you doing out playing in the snow,” he asks spooning soup into his mouth.

“I’m a volunteer with Bernie,” I say.

He slurps another serving, slowly facing me: “Well, turn the hell around and go back from where you came.” Simple. Clear. Copy that. I back out and step carefully down the icy, wooden steps.

Tonight, the Trump supporter was in his 60s. His house is grand. He’s friendly and passes me to his 20-year-old son. Oh, I want this one. I take my time. We talk about the climate crisis and how his generation will be hit the hardest. He likes Bernie. I think there’s a 75 percent chance he’ll caucus.

It’s two days out. Seventeen hundred out-of-state volunteers poured into town this weekend to knock on doors. In 2008, 230,000 people voted in the Obama/Clinton caucus. Today alone we knocked on 80,000 doors. The much anticipated Des Moines Register poll that has accurately called the last four caucuses was squashed. Other polls show Bernie up beyond the margin of error. I’ve been trying to stick with the motto “low expectations, high potential” but I can’t. I expect to win.  Say it: “We’re going to win!” How’s that feel? Honestly, it scares the hell out of me.

We endlessly discuss the math of the 15 percent candidate viability threshold that will be applied in each of the 1,680 precinct caucuses that will occur and the realignments that will follow in a second round of caucusing when supporters of candidates who don’t make that threshold have the chance to switch their support. 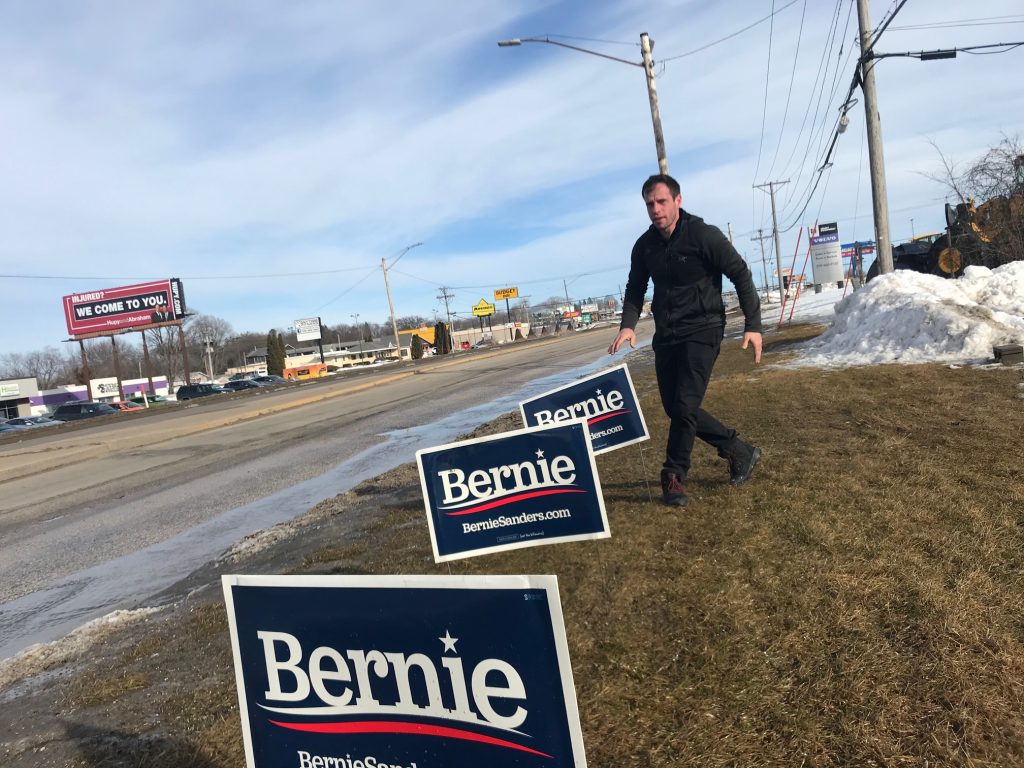 There are multiple scenarios. Some don’t favor Bernie. Still, he’s leading in the polls and now there’s the possibility that Biden might not even make the cut in some precincts. Bernie’s campaign has invested in low-frequency voters. Working-class and young voters who historically don’t reliably turn out. They turned out for him in 2016, and his campaign was a shell of the juggernaut it is now. Still, it’s muddy. We don’t have the clear, one-on-one, outsider-against-an-establishment-hack scenario like we did in 2016. Some of the progressive vote will go to Warren. But the centrist vote is also divided between Biden, Buttigieg and Klobuchar. It’s complicated and confusing. Two more days…

One month ago, the day after I arrived, Nina Turner came to Cedar Rapids to inspire us. She’s back again today. She’s fire. The crowd, too big for the office, gathers outside. It’s sunny and warm. Nina preaches of a moral movement and introduces Sanders. He runs through his stump speech, resonant in its clear evocation of a sane society. Nearby, “Not Me Us,” reads Bernie’s bus. It sets the tone. He states it as clearly as possible.

“If people turn out tomorrow, we will win. If they don’t, we will lose.”

It’s as simple as that. And it’s up to us. This is why I’ve been here for a month. This is why so many other volunteers have come from across the United States and other countries to Iowa. This is our absolute best shot at transforming a world that is so profoundly unjust and off-balance.

After the pep rally, I’m at the doors of a trailer park in Marion, Iowa, a suburb of Cedar Rapids. Tomorrow’s the day when Iowa flexes its outsized influence. There’s no more time to persuade undecided voters. Most of the people at the doors today have already expressed interest in Bernie. It’s now about turning them out. I settle into my closing pitch.

“If you’re feeling Bernie Sanders, you have to caucus. We have no idea what it’s like to have a president who has not been bought by billionaires, who won’t sell us out once they get into office. We have to find out. Regular people are his funders, voters and volunteers. He will fight like hell for us. And if you go caucus for him tomorrow, he will win!”

And again: “You literally can be the difference. In 2016, it often came down to one or two votes per precinct. Go to the school gym with your neighbors, stand with Bernie, and come home and watch the numbers come in. You can be a part of history.”

I tick through the same questions with each voter and note their replies.

“No, I can’t volunteer at the caucus.”

It’s on. One final day to get people out. It’s a sunny spring-like day. Good for turnout. I will be headed out to help persuade people at a rural caucus an hour outside of Cedar Rapids to side with Bernie. I’m surprisingly rested. Ready. We can do this. As Tina Nina Turner said yesterday,  “All that we love is on the line.” That’s all!

Win or lose today, we will not stop. We can’t. There is too much at stake. Jump in. We need every single body and every little bit counts.