Though he is now pitching himself as the man to rein in Wall Street, Michael Bloomberg’s efforts to deregulate the financial sector are as much a part of his legacy as stop and frisk. He fought efforts to curb the predatory lending practices that led to the 2008 financial crash and remained one of Wall Street’s most vocal and influential defenders even as public sentiment turned against the banks through the Great Recession.

Bloomberg and Wall Street are inextricable. He is as much a creation of the American financial system as credit default swaps or derivatives — an arcane instrument that seems inexplicable to the layperson, yet somehow accrues money by the nanosecond.

‘We love the rich people.’

The ninth-richest man on the planet got his start at Salomon Brothers, the brokerage that invented mortgage-backed securities. He became a billionaire by leveraging a rapidly changing technology to oversee the invention of his eponymous platform, known as “the Bloomberg Terminal,” a computer system ubiquitous on Wall Street that provides consolidated, up-to-the-minute market information. (Despite Bloomberg being hailed as a genius for the terminal’s invention, he has no background in computer programming, and histories of the machine exclude mention of programmers or designers.)

In the pre-Great Recession days of fast money backed by bad loans, Bloomberg was vocal about an existential threat: the prospect of New York losing its status as the world financial capital.

In November 2006, he penned a Wall Street Journal op-ed with Sen. Chuck Schumer on the importance of combating this looming threat to life, prosperity and The American Way. The NY pols argued that regulations were driving job-creating financial firms overseas, especially to business-friendly London. They declared that they were commissioning a report by the corporate consulting firm (and former Pete Buttigieg employer) McKinsey to analyze the problem and outline solutions.

The report, “Sustaining New York’s and the US’ Global Financial Services Leadership,” commonly known as the “Bloomberg-Schumer Report,” called for adopting a “principles-based” rather than a punitive approach to regulation. The ability of consumers and victims of fraud to sue banks and seek punitive damages against bankers needed to be scaled back. The 2002 Sarbanes-Oxley Act, legislation that tightened accounting reporting procedures after the Enron scandal, needed to be scrapped.

The McKinsey researchers tapped close to 300 executives, as well as unspecified “investor, labor and consumer groups.” The tone of persecution at the hands of an overzealous nanny state is predictable. One telling passage sums this up nicely: “Executives are by and large hesitant to raise even minor problems with regulators for fear that simply broaching the subject will lead to immediate enforcement action or, worse yet, a highly charged public prosecution.”

An executive interviewed for the report is quoted as saying “executives are as afraid to outperform as to underperform.” You could read this stuff and almost forget that this was the period when the Dow (and Wall Street profits) hit new records weekly.

Other suggestions made by the report included the establishment of an international finance zone in NYC, the formation of a  public relations entity to advocate on Wall Street’s behest and limiting the amount of money banks are required to keep on hand.

The report also fretted over a loss of private equity firms and hedge funds to the U.K., and the overregulation of derivatives and mortgage-backed securities — two financial instruments that were major players in the stock market crash.

The U.S. Chamber of Commerce followed suit with a report of its own, heavily referencing the Bloomberg-Schumer report, and declaring “The reality is that America is no longer the sole capital markets superpower.” The sentiments expressed in the original document became so prevalent that Supreme Court Justice Anthony Kennedy echoed them while writing the majority opinion in the 2008 Stoneridge Inv. Partners v. Scientific-Atlanta, Inc. — a case that limited legal actions against firms partnered with companies engaged in fraud.

After the housing market disintegrated, and the economy crashed, Bloomberg doubled down. He immediately sprang to action defending the banks. The man who during his tenure in office refused to raise taxes on the rich was now making the argument that the financial sector’s taxes fund schools, parks, and vital services. Clamping down on bad financial actors would only lead to the banks leaving.

The mayor, who the New York Times referred to as “perhaps the foremost defender of the financial industry in the political world” made essentially the same argument corporations always use when faced with potential regulations — play by our rules, or we’ll leave town. 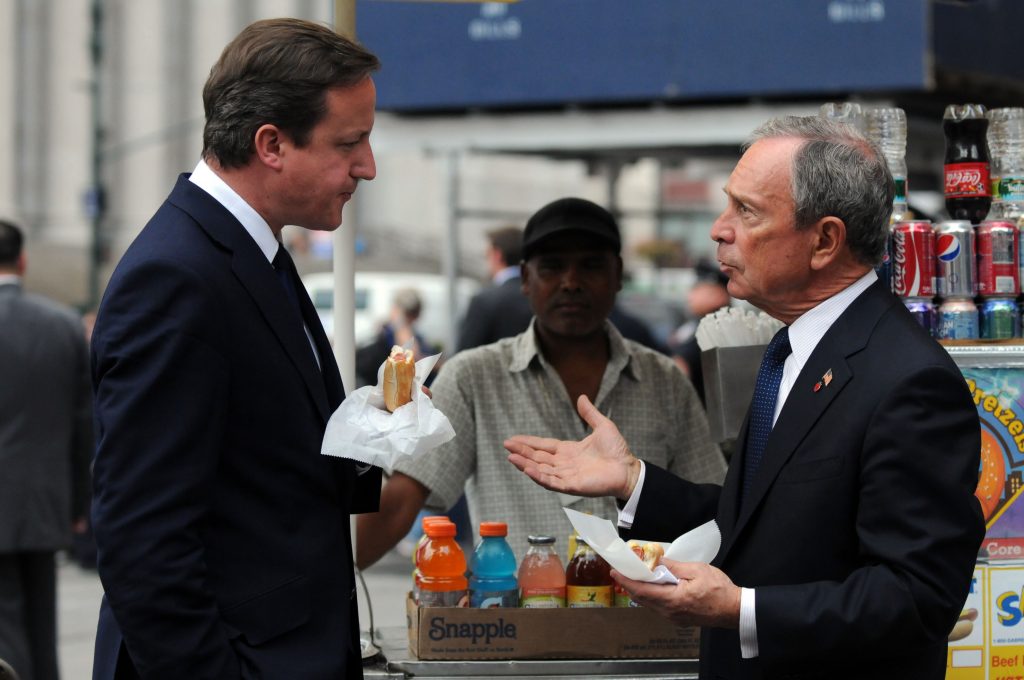 Bloomberg even lit into his old pal Schumer, expressing dismay at the senator’s unwillingness to defend Wall Street vigorously enough. He uttered no words of sympathy for the millions of Americans who lost their homes, including thousands of black and Caribbean constituents in Brooklyn and Queens. Instead, he publicly chastised President Barack Obama.

“The bashing of Wall Street is something that should worry everybody,” the mayor said as Obama was scheduled to visit NYC to give a speech arguing for financial reform. Bloomberg ramped up the rhetoric as the president’s visit drew closer, declaring of the banks, “We’re on their side,” and, as if there was any ambiguity, he added later: “We love the rich people.”

As for the victims of the crisis, Bloomberg, in an interview with Israeli outlet Globes, laid the blame squarely on greedy Americans lured by the prospect of unearned things they couldn’t afford.

“Sure, let’s get out the guillotine, there must be someone who’s corrupt,” he said sarcastically. “Let’s forget, for a moment, my role, the citizen who bought a home I couldn’t afford, who took a vacation I couldn’t pay for, or who bought myself a boat when I didn’t really have the money for it. It’s you, ‘the rich guys,’ not me, the citizen, who lived beyond his means.”

Bill de Blasio would later run his “Tale of Two Cities” campaign against the New York Bloomberg ushered in, a city he referred to as a “luxury product.” As Bloomberg’s final term drew to a close, a Politico headline noted,  “Wall St. misty as Bloomberg departs.”

The billionaire mayor is trying to reinvent himself like so many toxic assets to be dumped on the public, repackaged as an alternative to the madness of Trump. It would be delusional for the rest of us to allow him to get away with it.