Open, unapologetic discrimination against whole groups of people has been one of the hallmarks of the Trump administration. But it didn’t begin with him. Here in New York, one of the leading candidates to replace Trump presided over a police state that invaded every corner of the local Muslim-American community. Linda Sarsour witnessed it first-hand. The Brooklyn-based civil rights activist and mother of three recently spoke with The Indypendent about her community’s fight for inclusion and respect, her new book and whether people-powered movements or big money will ultimately prevail in this year’s presidential election. This interview has been edited for length and clarity.

The Indypendent: In your new book We Are Not Here to Be Bystanders: A Memoir of Love and Resistance, you write about clashing directly with Michael Bloomberg when he was mayor and the Coalition for Muslim School Holidays was pushing NYC to recognize Eid in schools. The environment was hostile for Muslim schoolchildren at the time. Talk about why you were fighting for this, and what Bloomberg did.

Linda Sarsour: As a product of the New York City public school system, having to choose between my faith and my education was something that I had to do every year. Becoming a mother myself and choosing to send my children to public school, I was committed alongside many parents to push the school system to recognize the two high holy holidays in the Islamic calendar.

This was not us asking New York City for any favors. It was about getting the type of recognition and inclusion and respect that our children in this public school system deserved. We did everything we needed to do. Petitions, press conferences, rallies, town hall meetings, op-eds in the newspapers. Every organizing tool we had, we used.

And Michael Bloomberg shut us down immediately. He was in a meeting sitting literally right across from me. He got up in the middle of the meeting and said, “I don’t care what you do. I don’t care how many petitions you gather. I’m just not going to do it.”

Knowing the context of post-9/11 America, knowing those statistics of the high rates of bullying against Muslim children, nothing moved this man. We ended the campaign under his tenure, and we started it again in 2013 as a new administration was taking place.

Because of him, it took nine years.

In my book, I titled that chapter “Love Letter.” It is a love letter to our children, to Muslim children. And the fact that it took nine years for the city that many [Muslim children] were born and raised in to tell them that they were welcome, that they were included and respected in the public school system — it was heartbreaking as much as it was a victory when we actually won.

When Communities United for Police Reform pushed the Community Safety Act to end discriminatory profiling and curtail searches by NYPD, you mobilized supporters, you bird-dogged councilmembers, you held rallies, but ultimately you had to win a veto-proof majority to defeat Bloomberg. What happened?

The Community Safety Act did two things. It expanded the protected categories of discrimination to include religion. As you know, the Muslim spying program was built on the idea of discriminating against an entire community based on faith. We also added housing status, and of course, sexual orientation and gender expression.

The second piece of it was the creation of an inspector general outside of the NYPD that would monitor its policies and procedures. Pretty much every single city department had some sort of independent oversight except the NYPD, the largest police force in the country. All it had was an internal affairs bureau, which, of course, is not transparent and does not hold any NYPD officials accountable.

In 2013, we went to the City Council. We did our organizing and we were able to get a majority to vote in support of the Community Safety Act. Because it was not a veto-proof majority, Mayor Bloomberg vetoed it.

In the interim, between Mayor Bloomberg’s veto and us going back for another vote, Bloomberg started funding candidates against City Councilmembers who voted with us and funding those who did not vote with us. He was intimidating Councilmembers not to vote with us on the second vote, using his resources to go up against poor, working-class people of color who only wanted a fair and just police department.

He invested money in ads. We went back for a vote in the summer. It was in the middle of the night, but we mobilized, we filled the chambers, and history happened. We were able to get a veto-proof majority, and create an independent inspector general.

Bloomberg was not happy with us at all. He felt defeated. He saw us as the enemy, and again started calling us “special interest groups backed by some elected officials.”

He never really wanted to hear about the direct impact that stop and frisk and surveillance had on Muslim communities, never wanted to be in that hard conversation. He does not like to be criticized, and he doesn’t really intend to engage people.

You also write about the NYPD’s infiltration and surveillance of mosques, social spaces, NYC neighborhoods, even campus groups. A journalist showed you a leaked confidential informant file showing that the NYPD tried to infiltrate the board of the Arab American Association while you were the executive director. Do you credit Bloomberg with starting the NYPD surveillance?

I don’t know exactly the moment that it happened. What I do know is that the majority of the program was implemented under Mayor Bloomberg with his support. He has publicly, over and over again, justified the program.

As Muslim communities and our allies organized against the NYPD’s surveillance and Mayor Bloomberg supported it, he was always on the defense. There was never a time where he said, “Let me reflect. Let me think about this and how it’s impacting this community,” even after a 2012 deposition by Thomas Galati, a chief intelligence officer at the NYPD, who said that this program produced zero leads.

We’re talking about a program that impacted at least a million New Yorkers, over 250 mosques and hundreds of businesses, Muslim student associations and nonprofit organizations. It included taking pictures of the license plates of people who congregated at mosques and infiltration by “mosque crawlers,” “rakers” and informants.

Not to make any judgment on whether his stop-and-frisk apology was sincere or not, because that’s for black and brown people who were impacted by stop-and-frisk to say — but he hasn’t even offered our community an apology.

Do you think the anti-Muslim surveillance from the NYPD continues? Are they still manipulating undocumented people and green card holders into becoming informants?

Does the way Michael Bloomberg weaponized the city and the country against Muslims when he was mayor disqualify him from the presidency?

There’s a lot about Mayor Bloomberg that disqualifies him from the presidency. I don’t want to just replace one billionaire with another.

Mayor Bloomberg’s justification for the unwarranted surveillance of Muslim communities reinforced the stereotypes and ideas that people had post 9/11, that somehow we must protect ourselves from the Muslims. Mayor Bloomberg did not have our best interests at heart.

Why would anyone vote for a man that was willing to give up an entire community’s civil liberties? What’s to confirm that would not happen if he was the president of the United States of America?

I don’t mind voting for someone who I may vehemently disagree with on one or two issues. I have said, listen, if my candidate does not win this nomination, I am willing to consider voting for someone else. But I have a personal line that I don’t want to cross, and that is to vote for Mayor Michael Bloomberg.

Bernie Sanders has broken out and become the Democratic frontrunner. Bloomberg is spending his way into the race and threatening to bombard the country with hundreds of millions of dollars in anti-Bernie ads. As a Sanders national surrogate, what do you think Bloomberg is doing in this race?

My opinion as an observer, and of course as a supporter of one of the major candidates, is that he’s not running against Trump, he’s running against Bernie Sanders. That’s very obvious from the attack ads that have been directed at Bernie and some of the language and rhetoric that he’s used at the debates, his insisting that Bernie Sanders could not beat Donald Trump, his fear-mongering around words like socialism and this idea that Bernie is not good for the economy.

‘It’s so natural for me to be part of the Bernie Sanders campaign because I don’t have to change anything about myself.’

He’s disrupting our democracy with his money. And more Americans need to be outraged about that.

Bloomberg is here to defeat and try to weaken Bernie as he gets to the Democratic National Convention. And at the end of the day, if we get to a brokered convention, that would be a disaster, because we will leave that convention splintered as a Democratic Party. Will we have enough time to heal to get to the general election and beat Donald Trump?

So ultimately, what do you think is more powerful? Unlimited money and all the ads, endorsements and glowing corporate media coverage it can buy, or a people-powered movement?

One of the reasons why I support Bernie Sanders is not necessarily because of Bernie as one human being. I support his movement. I see his momentum as an extension of the work I do every single day.

That’s why it’s so natural for me to be part of the Bernie Sanders campaign because I don’t have to change anything about myself. I’m still Palestinian. I’m still unapologetically Muslim. I unapologetically support marijuana legalization. I support criminal justice reform, immigrant rights and immigration reform. I support the dignity and sanctity of black life. I don’t have to change anything that I believe to conform to a campaign, and that is why Bernie has the most momentum in this country.

And why do most Americans believe that he does, in fact, have the most chance of all the candidates to beat Donald Trump? It’s because he has a movement behind him. And we’re gonna be there with him. Even when he gets into the White House, I’m committed to being the protester-in-chief outside to make sure that we are holding Bernie Sanders accountable to the promises that he made our movements. 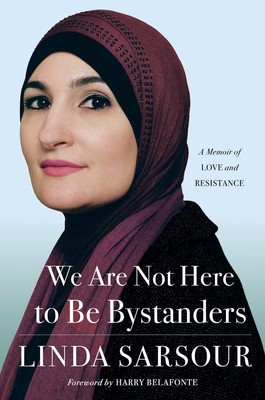 Linda Sarsour’s new book, “We Are Not Here to Be Bystanders: A Memoir of Love and Resistance,” is out March 3 from Simon & Schuster.