DERSIM, Turkey — Worn and ripped flyers of Fatih Mehmet Maçoğlu dot the outsides of homes and shops in Dersim, plastered there during Turkey’s municipal elections in March of last year.

In Dersim’s city center, a gift shop sells tote bags and trinkets of Maçoğlu, his prominent, bushy mustache — a traditional fashion staple for the Alevi Kurds who make up the majority in Dersim — is cartoonishly exaggerated on its lengths. Like the majority of Dersim’s residents, Maçoglu is a Kurd of the Zaza ethnicity.

As Turkey’s first communist mayor of a municipality, he has become a popular figure among Turkish left-wingers. It’s difficult to make an appointment at Maçoğlu’s office at the municipality’s headquarters in downtown Dersim, officially referred to as “Tunceli” by the Turkish government. Maçoğlu prefers the open-door policy, in which anyone can show up at his office unannounced.

Journalists, locals looking to air their grievances and supporters who travel from across the region to take a photo with him patiently wait to get a moment with Maçoğlu — often referred to as the  “hero” of Turkey’s opposition.

During a recent interview with The Indypendent, Maçoğlu, dressed in jeans and a baby blue polo, sat behind a large desk, surrounded by gifts bestowed upon him by his constituents and framed photos of him farming in his hometown of Ovacik, where he formerly served as mayor.

A large portrait of Turkey’s founder Mustafa Kemal Atatürk is positioned behind him, a typical fixture in all government offices in Turkey but atypical of Maçoğlu, whose former office in Ovacik was adorned with a painting of Karl Marx in the lobby where Atatürk’s portrait is usually placed.

Maçoğlu’s popularity soared during the five years he served as mayor of Ovacik, in the mountainous region of the wider Dersim Province, where he developed cooperative production models and was praised for his fiscal transparency, even posting the town’s budget — including revenues, expenditures and surpluses — on the outside wall of Ovacik’s town hall.

“This part of the country hosts the poorest people,” said Maçoğlu, a member of the Communist Party of Turkey (TKP). “They cannot afford a good standard of living. We started to list the problems in the region and we began to come up with solutions.”

The mayor developed an agricultural cooperative in Ovacik to grow and sell local produce. Its profits went to low-income families. Through a separate program he established, proceeds from farming chickpeas, potatoes and beans on state-owned land were repurposed to fund scholarships for the youth in the town. According to Maçoğlu, it now provides funding for all students in Ovacik to receive university scholarships. He also set up a free transportation system that shuttled residents to and from work.

Following the 2016 coup attempt in Turkey, when President Recep Tayyip Erdoğan declared a state of emergency and dismissed more than 11,000 Kurdish teachers, Maçoğlu assisted the fired teachers in Ovacik, helping them establish dairy and beekeeping cooperatives.

“These programs were the result of criticizing the system we’re living in,” explained Maçoğlu, who easily switches from serious facial expressions to smiles and cracks jokes that quickly ease any tensions in the room. 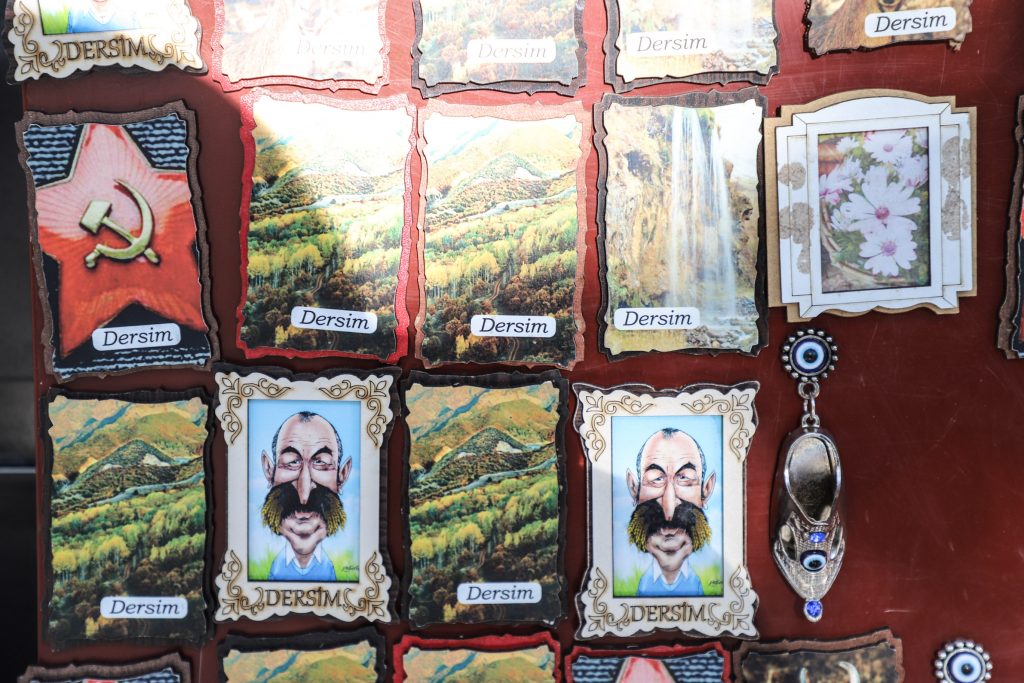 Market stalls in Dersim sell souvenirs with loving caricatures of the city’s mayor on them. Photo: Jaclynn Ashly.

“We tried to find a way out of this system in a way that we can still protect the plants, animals and human beings,” he said. “We came to understand that we can do this by producing.”

A 30-year-old resident of Dersim, who declined to provide his name, told The Indy that he supports Maçoğlu largely due to these policies.

The cooperatives “are exemplary of the revolutionary potential of the municipality,” he said, adding that although Maçoğlu has become a popular figure, his “revolutionary program” was the outcome of collective socialist assemblies, which have long been active in Dersim.

Maçoğlu is extending the policies he developed in Ovacik throughout the city of Dersim. He tells The Indy that he has already established free transportation systems in three neighborhoods in the city and has begun developing industrial and agricultural cooperatives to tackle unemployment.

‘We reminded people of the revolutionaries of the past’

Kurds in Turkey have faced a long history of persecution, which has involved decades of bans on the Kurdish language and identity. The government has since eased some of its restrictions on the Kurdish community. However, Kurds continue to face serious repression.

In 1938, the Turkish government, headed by Atatürk, carried out a massacre in Dersim when a rebellion broke out. The revolt came in response to a Turkish army takeover of the region. Many residents were expelled to other parts of the country in order to forcibly assimilate them into Turkish society.

The crackdown, which involved the indiscriminate killing of women and children, along with aerial bombardments and alleged gas attacks, resulted in the deaths of at least 40,000 Kurds, according to local sources. The official Turkish death count is closer to 13,000, although residents have long contested this number.

As part of the same operation, the Turkish government officially renamed Dersim “Tunceli,” which means “bronze fist” in Turkish. In May, about a month after Maçoğlu took office, Dersim’s city assembly voted to return the city’s original name to municipal buildings, but the move was blocked by the courts.

Maçoğlu tells The Indy one of his primary goals as a politician is to reconnect people with their rebellious heritage. While running for mayor of Ovacik “people were oppressed and hiding themselves and their ideologies,” he says. But while campaigning, he would blare the traditional music of Dersim in the streets, which he said has always been “revolutionary.”

“We started to remind people of the revolutionaries of the past,” he said. “This is why we gained so much support there.”

Maçoğlu is not without critics, however, some of whom are within his own constituency.

Before Maçoğlu, Dersim was run by the Kurdish-led Peoples’ Democratic Party (HDP). The party follows a co-mayor system, in which both a female and male mayor are appointed as part of an effort to promote gender equality. But following the 2016 coup attempt, Dersim’s mayors and other elected Kurdish leaders were dismissed, arrested along with thousands of HDP members and replaced with state-appointed trustees.

Metin Albaslan, a 31-year-old resident of Dersim, told The Indy that while he supports Maçoğlu’s socialist policies, even volunteering to help farm in Ovacik when Maçoglu was mayor there, he sees what he believes is Maçoğlu’s alignment with Turkish nationalists as a blow to his hopes for the Kurdish struggle and disrespectful to the sacrifices of Kurdish activists.

One event was particularly infuriating for him. Last year, Maçoğlu hosted an event for Asure Day, a holiday in the Alevi Islamic tradition, where he served soup to Dersim residents alongside a military official and the governor, an Erdoğan appointee.

“Why would he create a public sight like this with people who have tried to erode our communities and values?” Albaslan said. “It’s disrespectful to everyone who has been imprisoned or killed for our struggle.”

Özgür Amed, a writer based in Diyarbakir and a member of HDP, says that Maçoğlu seldom speaks on Kurdish issues, which has made him an uncontroversial figure among the Turkish left-wing, where support for Kurdish autonomy in the east is rare.

“He is focused more on popular politics than Kurdish politics,” Amed said, who spent three years in prison for protesting the Roboski massacre, a 2011 Turkish army border strike carried out with U.S. intelligence that killed 40 Kurdish villagers, mostly teenagers. He and other HDP members continue to support Maçoğlu but “there are still criticisms that are important for him to address.”

For his part, Maçoğlu tends to prioritize the practical over the political and tip-toes around direct questions about the Kurdish struggle — possibly due to fear he might meet the same fate as the last elected mayors in Dersim.

Following the coup attempt, an Erdoğan loyalist appointed to govern Dersim constructed a concrete wall around city hall and forced visitors to go through an X-ray machine before entering the building. A few days after Maçoğlu took over the mayoral post last year, he removed the walls and the X-ray machine. Dersim residents now walk into the building freely.