THUR FEB 20
6PM–8PM • FREE
TALK: After the Gig: How the Sharing Economy Got Hijacked and How to Win it Back
When the “sharing economy” launched a decade ago, proponents claimed that it would transform the experience of work—giving earners flexibility, autonomy, and decent incomes. It was touted as a cure for social isolation and rampant ecological degradation. But this novel form of gig work soon sprouted a dark side: exploited Uber drivers, neighborhoods ruined by Airbnb, racial discrimination and rising carbon emissions. Several of the most prominent platforms are now faced with existential crises as they prioritize growth over fairness and long term viability. Based on nearly a decade of research, this lecture by Sociology professor Juliet Schor will analyze what went wrong and discuss ways forward.
Theresa Lang Community & Student Center
6 E. 16th St., Mnhtn

THUR FEB 20
6:30PM–8PM • FREE
TALK: Budget Justice Town Hall
New York is the 3rd richest state in the country. One hundred and twelve billionaires live here and the wealth they control is triple the state’s annual budget. Much of that wealth is woefully un- or under-taxed. At the same time property taxes squeeze Long Island homeowners dry, teachers still buy school supplies for their students and Medicaid cuts loom. It doesn’t have to be like this. Speakers Ricky Silver of Empire State Indivisible, Assemblymember Harvey Epstein, and Mike Kink of Strong Economy for All explore the promises, plans, and pitfalls of Budget Justice. Bring questions!
Lenox Health Greenwich Village
30 Seventh Ave., Mnhtn

FRI FEB 21
6PM–8:30PM • FREE
FILM: Rojava Film Commune: Forms of Freedom
The Rojava Film Commune, a collective of filmmakers founded in 2015 and based in the autonomous region of Rojava (which means “West” and refers to the western part of Kurdistan in contemporary northern Syria), inaugurate their first exhibition in an art institution in the U.S. For Forms of Freedom, curator iLiana Fokianaki and the Commune drew from the Commune’s vast archive of collectively and individually produced films to arrive at a selection reflecting the methodologies, thinking process, and radical imaginations of the collective.
e-flux
311 E. Broadway, Mnhtn

FRI FEB 21
6:30PM–9PM • FREE
PERFORMANCE: Open Mic
An Open Mic poetry, performance and reading event focussing on our current environmental crisis. People who wish to read are invited to perform a piece that relates to the prompt environment, extinction and nature — whatever these terms mean to you.
Village Zendo — True Expression Temple
588 Broadway Suite 1108, Mnhtn

FRI FEB 21
7PM–9:30PM • FREE
SCREENING: The First Rainbow Coalition
Join the DSA’s AfroSocialist and Socialists of Color Caucus to view the new documentary The First Rainbow Coaliton. The film tells the story of when the Chicago Black Panther Party, led by the charismatic Fred Hampton, began to form alliances across lines of race and ethnicity with the Young Lords Organization and the working-class young southern whites of the Young Patriots. Everyone is welcome.
The People’s Forum
320 W. 37th St., Mnhtn 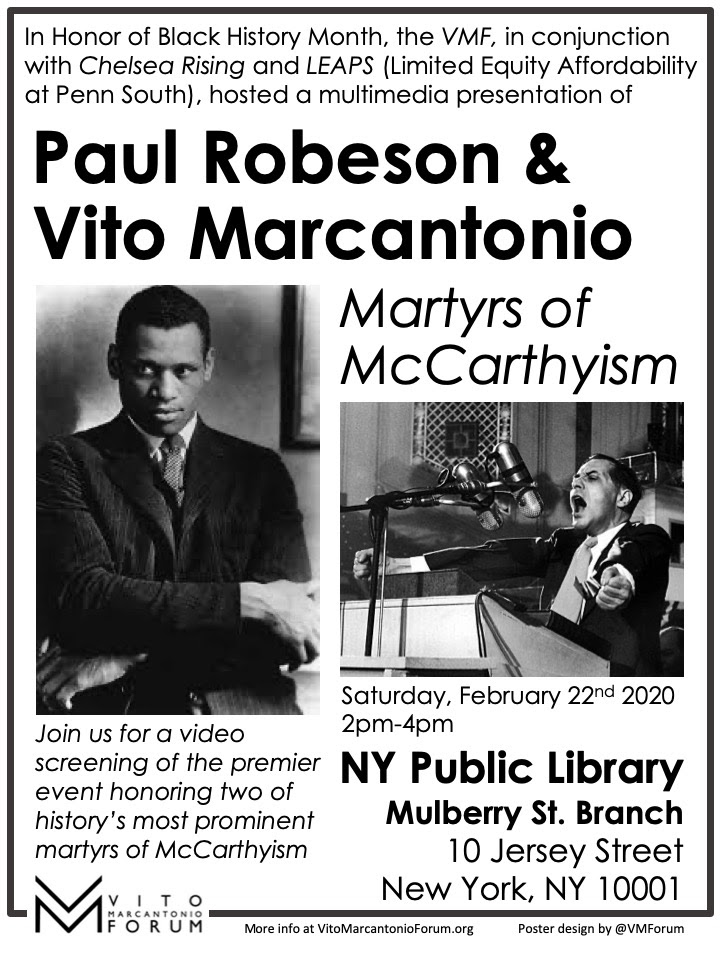 SAT FEB 22
8PM–10:30PM • $20 suggested donation
MUSIC: Clare Horgan
In one song, Clare Horgan will draw you into the world of pre-Christian Ireland. In the next, you will find yourself laughing, hearing her admonish a misbehaving man in a raunchy blues number. Then, before you know it, you have stepped into a dimly-lit jazz club in 1940s New York, sharing in the heartache of lost love. Don’t miss this rare U.S. appearance.
Peoples’ Voice Cafe at the Community Church of NY
40 E. 35th St., Mnhtn