The Indypendent
Menu
A Free Paper for Free People
Bobi Wine addresses supporters at his compound on the outskirts of Uganda’s capital. Photo: Sophie Neiman

KAMPALA, Uganda — Bobi Wine strides across the manicured lawn of his compound and greets a large group of university students assembled there. He only slept a few hours the night before, forgoing rest to promote his new protest song, but if the pop-star-turned-opposition-leader is tiring, he doesn’t show it.

“I grew up into a young man who loved music and saw in music the opportunity to communicate for myself, on my behalf, and on behalf of others,” he tells me.

Over the years, his songs evolved from ditties about women and money into explosive political anthems. Now he is the most formidable threat to President Yoweri Museveni, the man who has presided over Uganda for more than three decades, deftly eradicating term and age limits.

Wine won a seat in Uganda’s parliament in 2017, promising to represent the poor. The 38-year-old has been arrested on multiple occasions since, tortured, handed treason charges and says he’s been forced to cancel some 150 concerts.

He remains undeterred and, in July, announced his intention to run for president in the 2021 elections. His movement, dubbed People Power, has gained momentum and support across Uganda. Young people, many of whom have never seen a president other than Museveni, revere Wine. Vendors in small markets sell t-shirts bearing Wine’s face and boda-boda (motorcycle taxi) drivers are eager to talk politics as they whiz through traffic on the busy streets of Kampala, the capital of this impoverished East African nation of 43 million people.

In the midst of preparations for the upcoming election next February, Wine agreed to let me shadow him.

We meet at Wine’s home on the outskirts of Kampala on a blistering November morning. The property boasts a lavish white villa. Guinea fowl and rabbits peck at the verdant grass. The setting seems almost at odds with the populist uprising Wine promises to lead, but he and his followers say it is the only place they can assemble and speak freely.

“If we were living in a democratic country, we’d be in a hotel in Kampala,” David Lewis, the executive secretary of People Power, tells student leaders from Makerere University. They’ve been rallying for weeks against a proposed 15 percent tuition hike and have faced an outpouring of violence from Uganda’s military and police.

When Wine takes the microphone, the students shout and clap. Many wear red clothing and berets, symbols of the People Power movement.

“You are the gallant intellectuals of our generation,” he says, amid a round of cheering. “But it must not stop at chanting. We must take it a notch higher or else we are not going to be different than the generations that have come before.” Wine warns them of the dangers ahead. “They will unleash all kinds of oppression on you. They will arrest you. They will beat you.”

He himself has seen his share of tribulations. In August of 2018, while the young politician was stumping for another opposition candidate in the northwestern town of Arua, his driver was shot and killed in what Wine suspects was a botched assassination attempt. Wine was subsequently arrested, tortured and charged with treason. He says he was beaten and that his genitals were squeezed with pliers.

At the time, Museveni dismissed Wine’s claims as “fake news” but the opposition leader was so badly injured that he fled briefly to the United States for treatment before returning to Uganda. In April, 2019, he was again arrested, charged with holding an illegal demonstration and released on bail three days later.

A Groundswell of Support

We leave the compound and head to another meeting. As the car bumps along Kampala’s uneven streets, we pass Wine’s old haunts in Kamwokya. Graffiti maligning Museveni and posters promoting Wine’s cancelled concerts stain the walls. Residents here often scramble to make a living doing this and that. Shops with clothing, cellphones and beer are pressed together. Hawkers sell vibrant cuts of papaya and watermelon from wooden carts. Women make chapati (flatbread) at ramshackle stands, their hands colored white with flour. 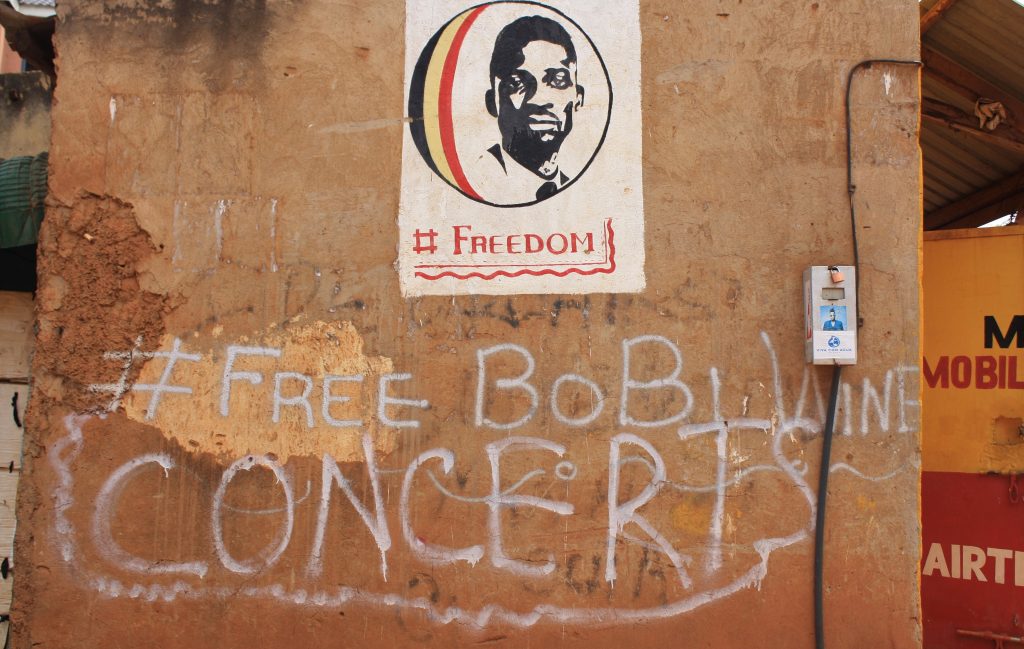 This is Wine’s stronghold. As we speak, eager supporters press against the windows of the car.

“He will win according to how the people love him,” a woman called Christine told me when I visited the slum a few days later.

Winding past his childhood home, Wine shifts between political talk and jokes, and between English and Luganda, one of Uganda’s many tribal languages.

I ask what inspired him to take the monumental challenge of running for president in an autocratic regime. He corrects me, saying the desperation, rather than inspiration, pushed him to challenge Museveni.

“I don’t like having to be in danger,” he says. “I love my children and I’d rather be with my kids now, with my beautiful wife. I’d rather be home. I don’t like this, but I am doing it out of desperation. We waited for people to save us. Nobody is saving us. We want to save ourselves.”

Uganda’s most recent presidential elections in 2016 were marred by internet shutdowns and reports that ballots were delivered late to opposition areas. Kizza Besigye of the Forum for Democratic Change and the leading opposition candidate at the time, was placed under house arrest. Reporters were subject to censorship, threats and violence, and media outlets were shut down, according to the Committee to Protect Journalists

Should Wine win in 2021, he will be Uganda’s first democratically elected leader since the country gained independence from Great Britain in 1962.

“People Power supporters will make sure to seal all of the loopholes that Museveni would have used to rig the election,” Wine says. “We are going to register massively. We are going to come out massively and we are going to guard our vote.”

There are times, however, when Wine’s populism sounds eerily like that of a young Museveni, who, after, seizing power in a guerrilla war in 1986, famously claimed that his presidency would not be a “mere change of guards.”

“We are different,” says Joel Ssenyonyi, a spokesperson for People Power. “We want to take power legitimately, nonviolently and without shedding blood.”

Wine’s top political priorities are to restore democracy to his country and give the population a voice in governance.

“Everything that has been set up to support that dictatorship will be crushed immediately,” he tells me. “I have to destroy that godly image of the president. For the first time, you will see a president who is a human being, who is accountable to human beings and answerable to human beings.” 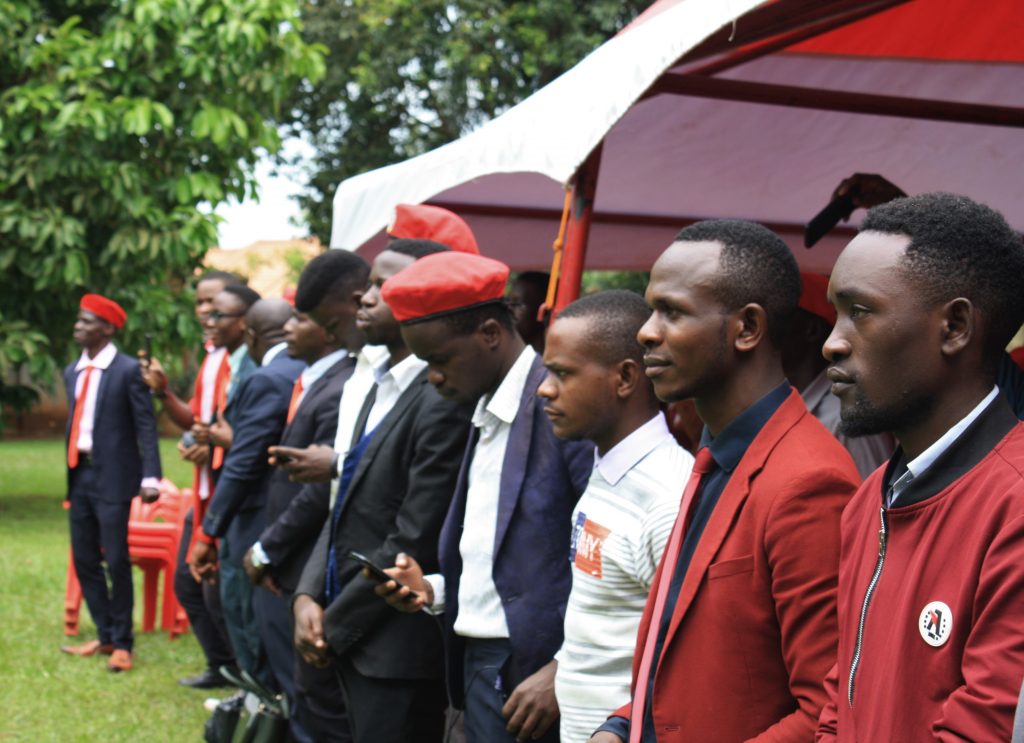 If Bobi Wine is in danger, so are many of his followers.

“The challenges I go through are in no way comparable to the challenges that the wider population goes through,” he says.

On a gray morning a few days after my meeting with the opposition leader, I spoke with Julius Katerega, president of Makerere University’s student guild and an avid fan of Wine. Katerga walks with a limp, which he says is the result of being tortured due to his participation in the student protests.

“There are a number of threats, especially on our lives,” he said. “We continue to persevere. We want to encourage others not to give up on the fight and to put our nation first, before ourselves.”

Shortly after our time together, Wine departed on a trip to the United States, where he met with members of the Ugandan diaspora and with human rights organizations.

“We are trying to galvanize this international attention on him and his cause and the People Power movement in general,” said Jeffrey Smith, founder of Vanguard Africa, a Washington-based organization that works to support democratic leaders on the continent.

That appears to be happening. In November, Wine was listed on Time Magazine’s 100 Next list and in December he won the Africa Freedom Prize from the Friedrich Naumann Foundation in Johannesburg, South Africa.

“When you have a sustained international spotlight on a country,” says Smith, “that really emboldens people to go out and to protest and to speak their minds, and to criticize the government that has lorded over them for over three decades. When they go to queue for hours to vote in 2021, they will know, hopefully, that their votes won’t be in vain.”

But in January, several months after our meeting, Bobi Wine and members of his team were again arrested.

“I spent two days in a small police cell,” Ssenyonyi wrote me in a WhatsApp message. “We were so crammed in there, we all couldn’t sit down at the same time. Sitting had to be done in turns throughout the day and night.”

All were subsequently released, but the crackdown seems to be yet another predictor of dangers to come.

“The repeated harassment and detention of members of the opposition by the government of Uganda has had a chilling effect on the climate of free and fair elections,” Eliot Engel, a Democratic congressman from New York who serves on the Foreign Affairs Committee, said in a statement.

The United States nonetheless provides Uganda, which it considers a strategic partner in combatting terrorism in the Horn of Africa, $970 million in economic and military aid annually.

In November, I asked Wine if he has a message for the international community.