The Indypendent
Menu
A Free Paper for Free People
Activists participate in a die-in during the 2004 RNC, while their future jailers look on.Photo: Jonathan McIntosh.

The 2004 Republican National Convention was just days away when I got back home from an organizing meeting on a hot August night in Brooklyn. I turned on the TV to watch Nightline, and there was New York Police Commissioner Ray Kelly being interviewed by Ted Koppel about the city’s preparations for the convention — and the anti-RNC protests that were expected to attract hundreds of thousands of activists.

Kelly was explaining to Koppel’s national audience that the police had reports of “violent threats” against the convention. Suddenly, a series of mugshot-style photos flashed across the screen. One of them was mine.

The RNC in NYC was, in part, the brainchild of Republican Mayor Mike Bloomberg — now Democratic presidential candidate Mike Bloomberg.

More pictures streamed by, including those of other organizers I knew and had worked with. Kelly explained that these photos were of people the NYPD was keeping an eye on — presumably because we were somehow connected with those “violent threats.”

Once I got over the shock of having my privacy invaded in this way — I still debate with myself whether the NYPD was more to blame than ABC, which allowed itself to be used to smear individuals whose names it didn’t even know — I compared notes with other activists. One friend was harassed in his home by an FBI agent. Others were tailed to and from their residences. In the days that followed, so was I. Later, we learned that law enforcement had been infiltrating activist groups all over the country that were planning to be at the convention.

The RNC in NYC was, in part, the brainchild of Republican Mayor Mike Bloomberg — now Democratic presidential candidate Mike Bloomberg — and his friends in the upper reaches of the city’s real estate aristocracy. They had hoped the event would pull in tourist dollars and, not so incidentally, showcase Bloomberg’s great ambition to redevelop what he called Midtown West, complete with a new football stadium. Instead, Kelly’s NYPD went on a rampage, “kettling” thousands of marchers on their way to the Garden and depositing hundreds on a fetid pier off the West Side Highway; they were held there and in overcrowded jail cells, sometimes for days — until the convention ended and its well-heeled attendees dispersed. 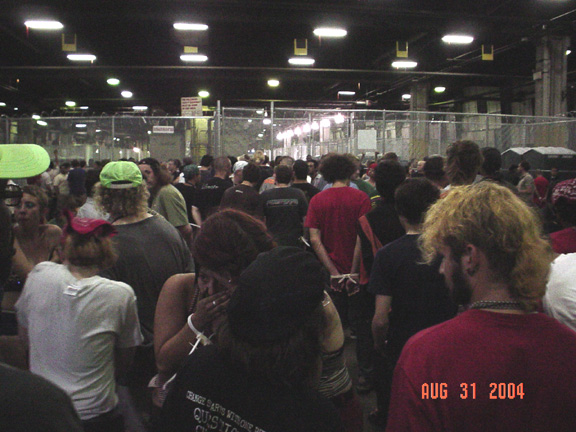 Covertly-taken images of an NYPD detention camp on Pier 57 during the 2004 RNC. Click here for more. Photo: Jacob Richards and Connie Murillo.

Ten years later, the city paid a record $18 million to settle a civil rights claim involving more than 500 protesters who were rounded up and detained, generally with no evidence that they had violated the law in any way. The city had earlier settled other, separate claims, bringing the total price tag for the NYPD’s misbehavior to some $34 million.

By that time, Ray Kelly was no longer police commissioner — he had left to become head of “risk management” for real estate developer Cushman & Wakefield — and Bloomberg was no longer mayor. But the pair had continued to defend the city’s manner of hosting the RNC and the tactics of their police. In 2011, they again demonstrated their penchant for using brute force against political protest when they violently evicted Occupy activists from Zuccotti Park. Two years later, the city paid more than $365,000 to settle a lawsuit brought by people whose property was destroyed in the nighttime raid.

Hundreds of demonstrators were held on a fetid pier off the West Side Highway. Others were kept in overcrowded jail cells, sometimes for days, until the well-heeled convention attendees dispersed.

The past doesn’t go away, of course, and Bloomberg has had to answer tough questions about the policies of his police, particularly their tactic of stop-and-frisk, which at its peak touched nearly 686,000 people just in 2011. Other aspects of his close partnership with Ray Kelly, including the RNC debacle, haven’t been scrutinized as closely, because Kelly, not Bloomberg, was the public face of law enforcement. But they deserve a closer look for what they tell us about Bloomberg’s probable behavior in the White House.

When he became mayor, in January 2002, it was the end of the Giuliani era. Crime had fallen dramatically in New York and the NYPD were happy to take full credit. The police were politically untouchable and the new commissioner, Ray Kelly, who had served earlier, from 1992 to 1994, was its savviest boss in decades. Bloomberg knew better than to challenge him, and Kelly quickly staked a claim as the most powerful political figure in the city.

It helped that they saw eye to eye on just about everything. In the wake of 9/11, they agreed that New York needed to start surveilling and infiltrating suspect political and religious groups again, and sought and received court approval to do so. Muslim groups in the city and suburbs received especially close attention. The NYPD also installed some 3,000 surveillance cameras in downtown and midtown Manhattan, making New York a pioneer “smart city” — i.e., a pathbreaker in digitally-enabled metropolitan privacy evisceration.

Bloomberg has never had a problem with any of this, just as he had no discernible problem with his police commissioner’s strong-arm tactics during the RNC. When they received court approval for stepped-up investigations of political groups a year before the convention, Kelly argued for it on the grounds that “we live in a more dangerous, constantly changing world.” Bloomberg, during his last year as mayor and just after the Boston Marathon bombing, virtually parroted Kelly, saying, “The people who are worried about privacy have a legitimate worry. But we live in a complex world where you’re going to have to have a level of security greater than you did back in the olden days, if you will. And our laws and our interpretation of the Constitution, I think, have to change.”

There are many grounds to be concerned about a Bloomberg presidency, especially his naked intention to checkmate any deviation from the neoliberal economics that helped make him rich. But his conduct around the RNC raises three other critical concerns: first, his disdain for individuals’ civil rights when it interferes with his grander schemes; second, his openness to new methods of social control in the name of security; and third, and possibly most important, his dereliction of duty in blindly following the lead of people in uniform when either the first or second of these matters comes up.

Put these all together, then imagine Bloomberg in charge of an executive-branch apparatus that includes the Pentagon, the CIA, the NSA and the FBI. When I try, I’m reminded of that night in 2004 when I saw my face on TV and Bloomberg’s top cop darkly warning America about activists and “violent threats.”

Eric Laursen, an activist and independent journalist, was a media outreach organizer with the citywide coalition against the 2004 RNC.