After a week of experiencing COVID-19 symptoms, I scheduled a visit this past Thursday to a drive-through coronavirus testing facility on Staten Island.

Under the tent, I could see people in hazmat suits. “Hot Zone,” a red sign hanging above them announced.

Coming from Brooklyn, I found the upper level of the Verrazano Bridge closed. Like so much else now, the barricades felt apocalyptic. Approaching the test site, I started seeing digital signs reminding would-be visitors that testing was by appointment only. When I got to the corner of Seaview Ave, I was waved over to a special lane by a soldier in fatigues. More signs now, all hand-written, held by soldiers and tacked to fencing. “ID On Dashboard.” “Keep Windows Up.”

I was stopped by a soldier who made sure my ID was on my dash.I pointed at it enthusiastically. Finally, I got to the driveway into the testing site. Keeping my window up as instructed, I spoke with another soldier, this one very young.

“Do you have an appointment?” he shouted, as I held my ID up to the window.

“What time is your appointment?”

I held up both hands for “10” like a kindergartener, forgetting, momentarily, that he could hear me.

He checked my name on a clipboard and then looked in my backseat to make sure I was alone in the car and waved me through. A few yards later, I was stopped again to verify that my ID was on the dash. There were more soldiers holding signs to drive slow: “Speed Limit 5MPH.” Other soldiers waved me forward, encouraging me to drive just a tad faster.

I finally got to a big white tent where three men, not wearing fatigues, cheerfully beckoned me forward to a traffic cone placed in the middle of the path. Beyond the cone, under the tent, I could see people in hazmat suits. “Hot Zone,” a red sign hanging above them announced.

The first man asked me if I had an appointment and then asked if the address on my license was correct. I said it was, and he told me to write my email and phone number on my phone while he took down the address from my license through the windshield.

I did as he asked and he copied the text onto his clipboard, then showed me what he had written so I could confirm it. He gave the form to another man who came up to my windshield to check the info from my license and verify my information again. Once confirmed, he slipped the form under my windshield wiper and they removed the cone.

Inside The Hot Zone 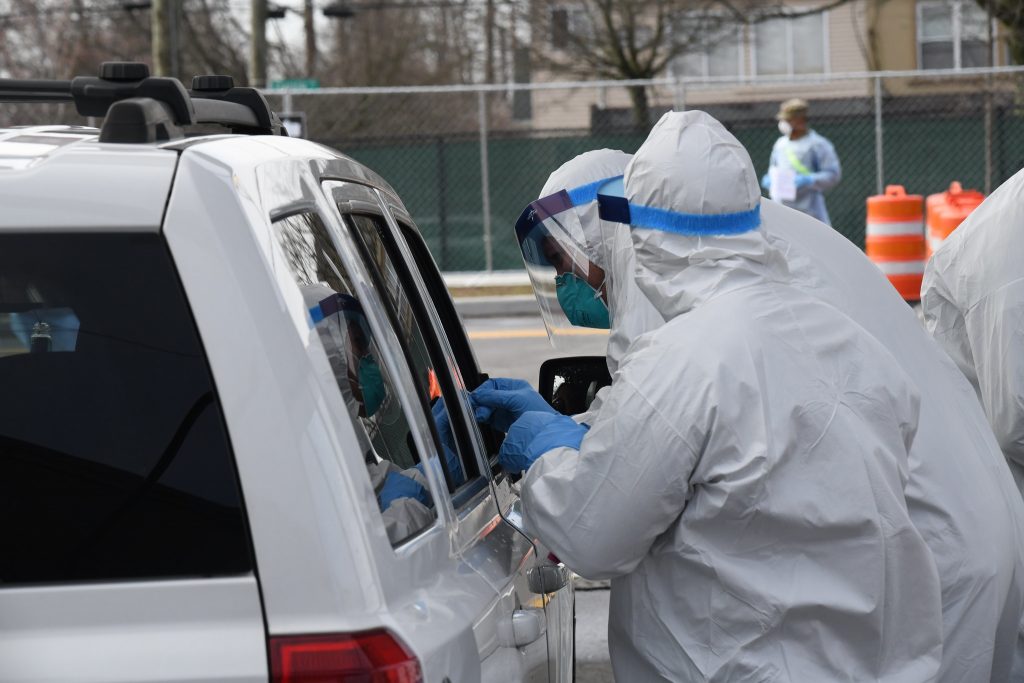 I drove up to a table filled with testing supplies. There were several workers on hand. One of them pulled the form off my windshield, made me confirm my information again, and then pulled off a sticker from the paper to hand to a seated worker, who applied the sticker to a little tube.

This was it. I was, at long last, instructed to roll my window down.

Another worker approached me and instructed me to place my head against the headrest and look straight ahead. She would be swabbing both my nostrils and the back of my throat. I did as instructed and even though I knew what was coming I still yelped when the first swab hit the back of my sinuses. It hurt! It was like being stabbed in the brain.

The second swab brought tears to my eyes. Then I stuck out my tongue and said “Ahhh” while she did one last scrape. I watched her hand the swab to the person at the table and I was done. I rolled my window up and pulled away. Outside the tent, three people held signs that said I would get a call in two to three days with the results.

Looking back, what I remember most was how friendly and positive everyone was, with the exception of the people in the hot zone who were pretty cranky — which is understandable. They were the ones being potentially exposed by both patients and the samples they were taking.

But at the time, the experience was overwhelming. I cried as I drove away. The soldiers, the checkpoints, the hot zone — it felt like a movie. There was also the anxiety of complying with instructions, of feeling like the slightest misstep would get me booted out. It’s like when you’re in the TSA line at the airport, and you think, “What if they find a bomb in my bag that I didn’t put there?” Take that anxiety, multiply it by 100 and add a global pandemic.

I may not have coronavirus. I’ve been feeling better for a week, but I still don’t feel back to normal. It’s impossible to parse these vague symptoms.

Is that crackle in my breathing just my imagination? Is my chest heavy from congestion or anxiety? Is my fatigue due to illness, or just the fact that I was in bed for seven days and have barely left my house in almost two weeks?

If I don’t have it, I won’t feel bad about getting tested. My symptoms were real and in the current context, it’s really quite reasonable to fret about any symptoms given how much this situation has been mismanaged.

I am lucky that I can continue to isolate at home with my family, unlike many essential workers who are obligated to continue working even if they have exposure to a documented case of COVID-19. We should all be getting tested at this point.