A table on Gates Avenue in Bed-Stuy offers free vegetable seedlings. Someone on Facebook announces they want to be Bushwick’s “clean syringe and Naloxone apocalypse delivery girl” and quickly connects with others ready to help. In Kensington, Brooklyn, handwritten fliers have begun cropping up promising resources for abuse victims, childcare, and medicine — just some of the sprawling mutual aid work underway across the borough and New York City, now the epicenter of the COVID-19 pandemic in the United States.

For a comprehensive list of mutual aid resources in the New York metro region or to register your group visit MutualAid.nyc.

Prison abolitionists are working to supply inmates at Rikers Island with soap and other necessary supplies to protect them from the virus. Relief funds have been established for service workers, theater workers and low-income artists, to cite just a few.

“Mutual aid is not so much a form of charity as it is about creating a support network where everybody’s needs are met,” said Lauren Hitt, a spokesperson for Queens-Bronx Congresswoman Alexandria Ocasio-Cortez, who has set up a #WeGotOurBlock mutual aid toolkit and hosted a teleconference last week with prison abolitionist Miriame Kaba to spearhead grassroots efforts.

This could include running errands for the elderly or FaceTiming with someone who is feeling the lonesome effects of social distancing and isolation that the threat of the virus has imposed, notes Hitt.

With roughly a third of the city’s confirmed cases, Queens is currently the borough being hardest hit by coronavirus. At least six neighborhood-based groups have sprung up so far, Moumita Ahmed of the Queens Mutual Aid Network, tells The Indypendent. 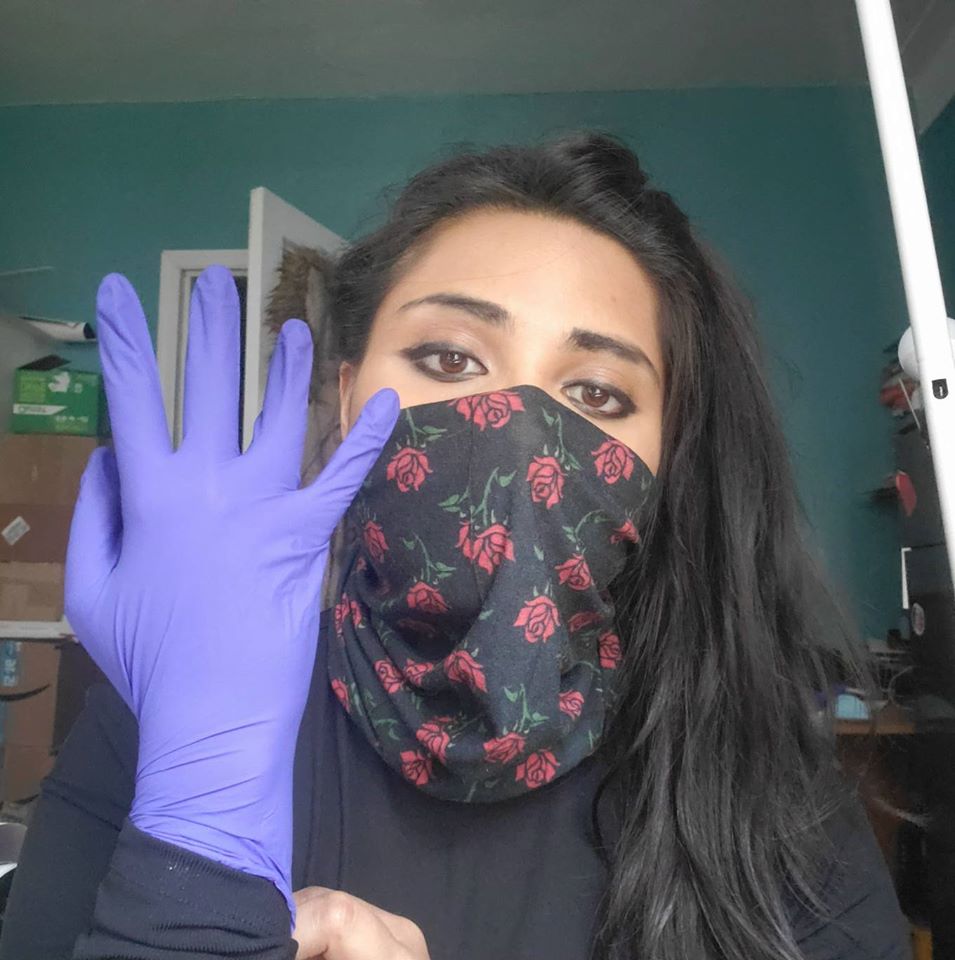 “All of our groups together have helped hundreds of people in the last week alone and my local group in Jamaica has helped around 15 people access groceries and medicine,” says Ahmed who is also the co-founder of Millennials for Bernie, adding that the Queens network has access to roughly five hundred volunteers.

In Brooklyn, earlier this month, as the full scope of the virus’s spread began to become apparent, Cheryl Rivera set up an online fund for New Yorkers struggling to buy groceries. Rivera can’t remember which day it was exactly — Thursday, March 12 or the day after — because she’s been busy nearly nonstop since.

A data analyst for the New York City Department of Education, Rivera moonlights as an activist with the Democratic Socialist of America’s feminist working group and is involved in campaigns to end mass incarceration. At first, she and other activists were concentrating on getting soap to people behind bars. Running into the logistical issues, however, and realizing that other groups were working on similar initiatives, Rivera and other feminists within DSA put their heads together.

“We said, ‘What else does it look like there’s a need for?’” she recalls. “‘Grocery fund.’

She and her comrades set up a Google form to process requests and a PayPal pool to collect money.

The activists spread word of the funding drive through Twitter and DSA listservs. Within five days they had raised $28,000. By the time Rivera spoke with The Indy on Saturday, March 21, they had collected $40,000. After red tape from PayPal became too much of a logistical hassle, Rivera and others helped DSA launch a new fund drive on the Chuffed giving platform that has raised over $17,000 so far.

Such coordination is part of a DSA-wide mutual aid campaign that is teaming up with community groups and harnessing its many activist fronts — labor, housing, immigration, healthcare — to take on the virus and plug the many cracks in our social fabric that it has laid bare.

Although DSA is far from the sole organization providing New Yorkers assistance and its campaign is still in its infancy, it counts 5,500 members in the city and about ten times as many nationally, an ample pool of activists to draw on.

The challenge mutual aid workers are facing is that information has to be centralized but by necessity the mutual aid has to be localized.

“Hi neighbor. Self-isolating? You are not alone,” begins a flyer the group has posted to Google Drive, along with a protocol for safe distribution, for those able to instigate relief drives in their communities. 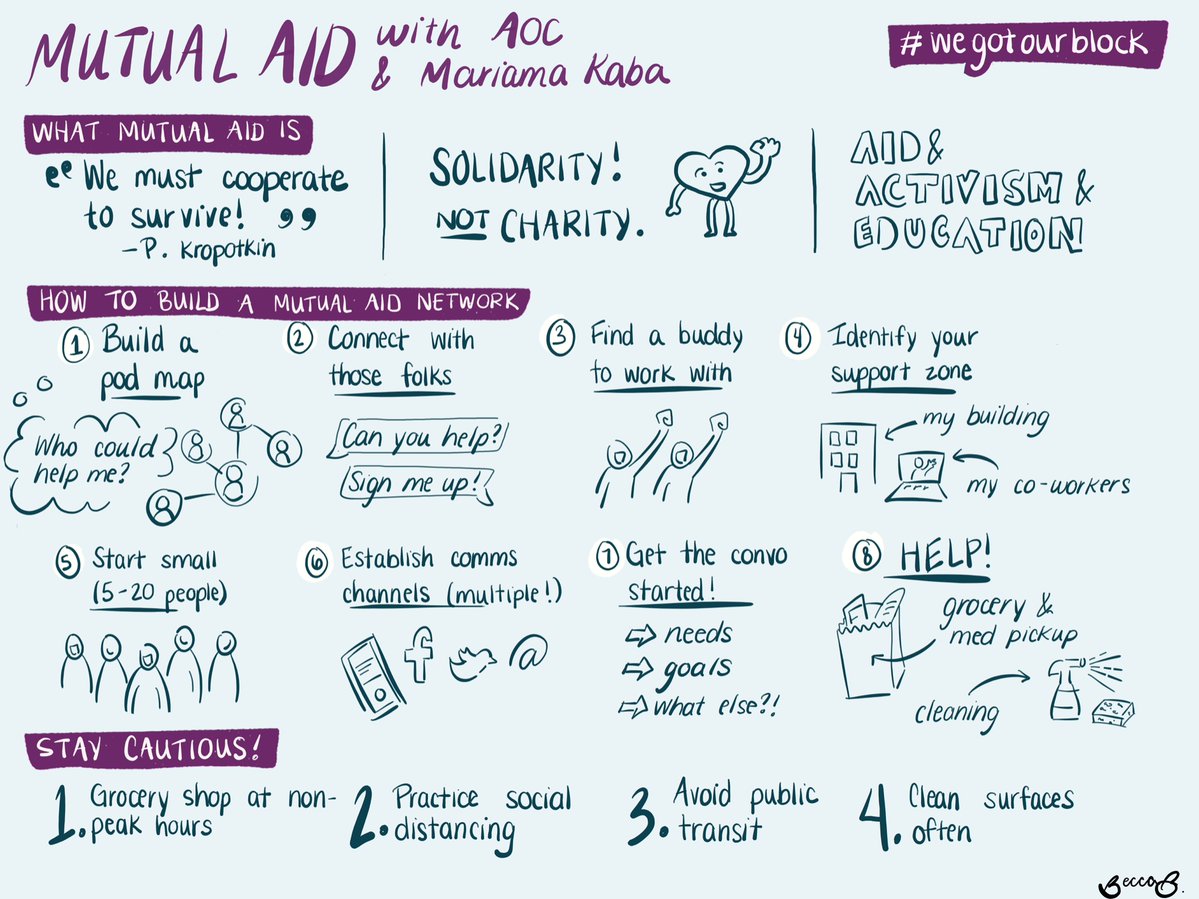 Illustration by Becca Barad for #WeGotOurBlock.

Beginning on the block, or even in a building, is key, given the threat of exposure and transmission coronavirus poses. Another DSA flier allows volunteers to list the services they can provide based on their skill sets. It includes childcare, grocery delivery, meal prep, legal aid and assistance in applying for benefits like unemployment and food stamps.

While forming localized groups, the organization is setting up a centralized database of volunteers and partnering with others who have their own, often-long established networks of people ready to help. For instance, DSA is directing people under threat of eviction to the Metropolitan Council on Housing’s tenant defense hotline.

Much of this mutual aid work is occurring in tandem with larger political projects, such as organizing rent strikes, as April 1 approaches and bills come due.

“We have to meet the needs of people and we have to push for a system change,” says Rivera. “A lot of people are seeing that in a crisis the system doesn’t work for me. I can’t get my needs met.”

The last time a disaster anywhere this magnitude struck New York was Hurricane Sandy in October 2012. The city, state and federal government were woefully unprepared. In the ensuing days, and eventually weeks, they provided little relief for coastal communities in lower Manhattan and the outer-boroughs that were left waterlogged and flattened by the storm.

Former Occupy Wall Street activists formed Occupy Sandy, partnering with local community groups to deliver generators, food and medical supplies to the hardest-hit areas. But while activists were able to come together after the storm, coronavirus prevents precisely this type of activity. Likewise, nobody has been left untouched by the consequences of the pandemic.

“Everyone from every class, in every region is affected,” says Michael Premo, a co-founder of Occupy Sandy who has been advising numerous mutual aid projects underway now.

At the same time, he notes, advances in social media and video technology mean we have more digital tools for communicating than ever before, even if we can’t do so face to face. And the egalitarian nature of the virus — infecting everyone from Rikers inmates to Prince Charles — could foster a sense of solidarity like never before.

“This is so open and so crazy and all the unknowns are so big, there has to be a lot of work put into reinforcing emotional and mental stability for people, [providing] radical kindness, like ‘Love is on the way.’”

If there’s a silver lining to this pandemic it may be that the bonds forged during it will eventually be directed toward the system change that Rivera and other activists have been fighting for years.

The mutual aid groups Rep. Ocasio Cortez and others are helping to launch are meant to be long term, says Lauren Hitt.

“Mutual aid groups can be very powerful community organizing tools,” she said. “If a community recognizes consistent needs or patterns of needs and decides to organize and push through economic relief from a city, state or federal level, that’s something that they will have gained the ability to do through their regular interactions with one another and their regular support.”

Leia-lee Doran and John Tarleton contributed reporting to this article.