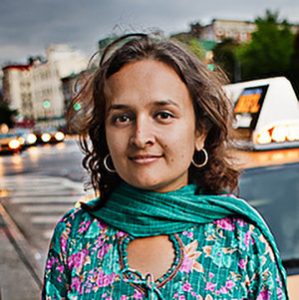 On Monday evening, The Indypendent spoke with Bhairavi Desai, founder and executive director of the New York Taxi Workers Alliance. The union represents 21,000 taxi, rideshare and livery drivers, many of whom continue to work amidst the COVID-19 outbreak here in New York City and are on the frontlines of the pandemic.

The number of passengers has nonetheless thinned out due to “social-distancing” instructions from health authorities. The steep downturn afflicting the industry, and the wider economy as a whole, comes at a time when, left largely unregulated, hyper-exploitative rideshare companies including Uber, Lyft and Via have already put many drivers under severe economic stress. Rideshare drivers are hustling for increasingly lower wages and medallion values have dropped.

In a telephone interview, Desai called for both immediate measures — paid sick leave,  unemployment benefits and the suspension of medallion mortgage payments — and systemic reforms like Medicare for All to protect drivers, as well as halt the spread of the pandemic and curb the wider financial fall out.

Perhaps you could outline some of the risks drivers are facing right now during this crisis. What is the situation for drivers in the city?

It’s pretty bleak out there, whether you are a yellow cab driver or an Uber driver. The streets are really starting to empty out. In the daytime, you still have people trying to get their business done. But in the evening, there’s just not much out there.

They’ve become frontline workers during this pandemic. It’s a service industry that is not frivolous and hasn’t been shut down yet. People rely on them, especially people who don’t want to take mass transit right now.

This is an industry that has already been struggling. What are the economic challenges facing drivers?

There’s no doubt among service industry workers, including taxi workers, that there are many people working today because they don’t feel that they have a choice. What we’ve been saying to drivers is, “Choose your health and only think about your grocery, utility, cell phone and internet bills. And medicine.” These are lifelines for people. “Only think about these payments.”

Poverty is a moral failure of the economy. Now people are beginning to understand it is also a great public health risk.

Some people have child support. Some people have payments to send back home. We’re basically saying to them, “Your biggest payments, like house mortgage or medallion mortgage, think of them as secondary right now because at the moment they’re just too big to think about.”

Should the government bailout taxi and other workers who are going to be enormously impacted by this economic shutdown?

We got an email today from a member. He said, “I’m an Uber driver. I want to be making money. I have $50,000 in student loans. What should I be doing?” My response to him was “concentrate on your basic expenses and figure out what you really need [to earn] for this month.”

It’s really astounding when you live in a society where paid sick leave has to feel like a bailout for working people. Paid sick leave and unemployment should be two of the most basic safety nets in our economy.

And now we’re seeing public health consequences for that.

Absolutely. We know that poverty is a moral failure of the economy. Now people are beginning to understand it is also a great public health risk. And the federal government already pumped $1.5 trillion into the financial sector and cut interest rates down to zero.

That’s who they think of first, apparently.

I saw an interview with Jamie Dimon, the JPMorgan Chase CEO, where he says recessions are bad for people but they could be good for us, meaning the banks. It’s just disaster capitalism. Pretty lethal.

Uber is basically offering quarantine leave. If you test positive and they quarantine you, then they will compensate you for up to 14 days. I mean, if you get quarantined, really, at that point…

And how many people have been exposed by that point too?

I’m sure whether they feel something coming on or not, a lot of drivers don’t want to drive with the threat of this thing out there, but there’s this economic burden they have to meet.

There is an underlying economic desperation across the entire workforce. Owner-drivers are afraid of a foreclosure of their medallion. Uber or Lyft drivers are afraid they will be logged off once they are healthy and they want to go back to work. They’re afraid they’ll have limited hours, not just because of the ridership downturn, but because the companies will say that they didn’t meet their quota in order to have guaranteed app time.

We shouldn’t allow these companies to turn sick leave into quarantine leave. That would be a really dangerous step backward.

Owner-drivers are disproportionately older drivers who are at high risk. On the Uber and Lyft side, you have the largest workforce in this industry and they’re all driving without a plexiglass partition to keep them safer. And they’re more likely to pick up multiple passengers at one time.*

What is the Taxi Workers Alliance doing right now to protect drivers, to advocate for them? It sounds like you’ve been fielding a lot of questions and concerns from your members.

We’ve been burning the midnight oil, pushing for drivers to be included in paid sick leave at the federal level and at the New York State level. And we’ve been pushing for the state to notify all drivers that they have a right to apply for unemployment; that if you feel that your working conditions will make you sick or you are left earning below minimum wage, essentially slave wages, you have a right to apply for unemployment.

You may recall, our Uber and Lyft members applied for unemployment and they won the case [in 2018]. Since that time, the state hasn’t required Uber and Lyft to pay into a fund. At this point, the state’s unemployment insurance fund is practically dried up. We’ve been calling on the state to have Uber and Lyft pay their share to make that fund solvent. For the state to notify all Uber and Lyft, as well as Via drivers, that they have a right to apply. And for it to extend disaster unemployment to other workers, such as yellow cab lease drivers and livery drivers.

For owner-drivers, we’ve been helping them apply for small business loans at 0 percent interest rates that the city is putting together and we’ve been advocating directly with lenders to suspend mortgage payments.

Have any officials with the city or the state reached out to you? It seems like your organization could play a helpful role in coordinating a public health response or at least communicating a message.

There is a role that we can play and without that, this crisis is going to get much bigger. We’ve spoken with the mayor’s office and we’re also communicating with the governor’s office and New York’s Congressional delegation. We’re doing more to get Uber and Lyft at the table as well.

We’re scrabbling on behalf of a workforce that has less of an economic safety net to be able to stay at home. Meanwhile, the more they work, the greater they are at risk.

Have medallion lenders been receptive to suspending payments?

Marblegate Asset Management has said they are deferring payments for 30 days. That’s at least some relief for 3,500 medallion owners. We’re trying to get all the other lenders to follow suit. And, in the meantime, in the next 30 days, work out a debt forgiveness program that brings down drivers’ loan balances to no more than $150,000 and refinance them at no more than $900 a month.

We’re trying to balance immediate responses with system-wide changes that have been kept on the back burner by the industry and have placed drivers at a higher risk. We’re saying to these companies, “You can’t keep ignoring these pleas from your workforce.”

A time like this speaks to the importance of a union.

One thing we’ve been saying to our members is, “What you are seeing in this industry is at the intersection of what’s been happening to this country as a whole.” Had we had Medicare For All we would have our public health crisis under better control, like in South Korea, for example. At the same time, had companies been paying drivers above poverty wages and provided them with job security, and had the lenders agreed to debt forgiveness, then Uber, Lyft and yellow cab drivers alike would not be facing a greater economic crisis. The companies would have ended up being better off, as well.

So we’re saying to our members, “Keep your focus on immediate basic needs and join the universal fight of working people across this country around issues like rent and mortgage cancellations. And prioritize your health.”

It’s clear that we as an industry and a society can’t keep waiting to make these changes. They’re coming at a great cost today to the economy itself. Maybe the same people that control our economy, who went into a panic and needed a trillion-dollar bailout from the government wouldn’t be in this predicament had they listened to workers and poor people all along. That’s the same message at a microlevel that Uber and Lyft and garage owners need to hear.

*After coming under pressure, Uber and Lyft halted their pool ride services on Tuesday.