The Indypendent
Menu
A Free Paper for Free People
Anthony, a Financial District cleaner: 'I work outside here, so I am very worried.' Photo: Sue Brisk.

The Indypendent’s Carrie Klein hit the pavement this week, gauging how New Yorkers are responding to the threat of COVID-19. From fear to optimism to movie recommendations to calls for universal healthcare — here’s what some of them had to say (edited for clarity and concision). 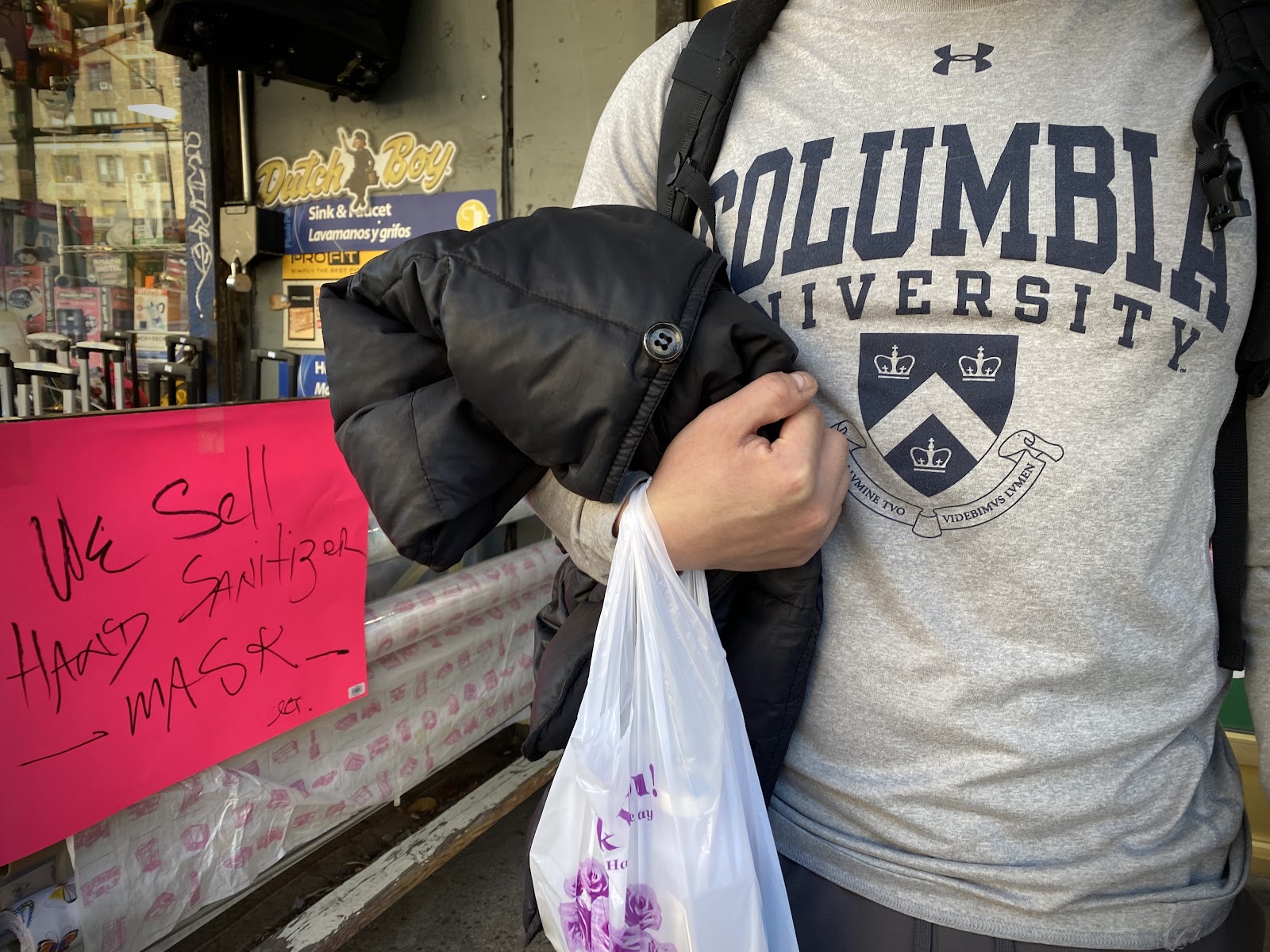 I’m from mainland China. I have family there. They’re worried about me more than the situation back home, actually. First, because of the virus itself. Second, they are worried about if I have enough self-protective supplies at my disposal.

My family is not in the epicenter of the outbreak. So everybody has been paranoid, but things back home have really calmed down, according to my parents and my friends there. The epicenter is still under strict quarantine but apart from the province, I can safely say that 60% of what used to be the daily activity has been restored.

Back in January, when things were really bad back home, I and a lot of my friends took precautionary steps. We didn’t hoard, but we bought enough stuff for future use in case the situation here gets more dire.

My office mates are fine. I’m the only one from China in my office. So I’ve been telling them how they should get prepared early on. This is the least I can do. I’m not really worried about catching it myself; it’s probably not going to kill me. I’m more worried about its effect on the city, on the society, of course on the stock market. My friends are doing fine. They have to go back to work. None of them are overly worried — they are appropriately worried.

If I can’t go into work? I’m a doctorate student in the school of engineering. I’m a mathematician/ That is the least affected job, I would say. All I need is a computer, paper and the internet to communicate with my advisor. That’s it. Should the campus be closed, I will be fine. But my friends in the physics department, where there is lab work, they will certainly be affected.

I’m scared and I’m not easily scared. I have a son who has asthma. I’m preparing everything. I called his doctor and said, “You have to prepare my son’s prescription for us, just in case.” I have tons of antibacterials and tons of everything. If you can name it, I have it. I didn’t get the masks in [that hardware store] there. They’re too expensive — $9.99 for one and you can only use them once. Everything that I bought just now cost $123, and only for antibacterial stuff. I bought two packs of antibacterial wipes, two Lysol sprays, and four Lysol sprays for cleaning the bathroom. That’s all. And it’s only one small bag.

I have paper napkins I use to hold on the subway. You have to do what you have to do. I work in a house for someone who travels a lot. He told me this morning, ‘Thank God they canceled my trip.” I said, “If you come back from a trip and I hear you coughing, I’m out right away. I have to take this seriously.”

My son is 16. The schools keep on communicating that there is no harm in going to school and they will inform us if there is something going on. But I told my son, you have to always take care of yourself. Do not wait for the school to tell you that.

I prepared some extra food, just in case. Just the bare minimum that’s not going to go bad. But we need to at least help one another. Not everyone can afford this, especially the old people. We have to take care of one another. 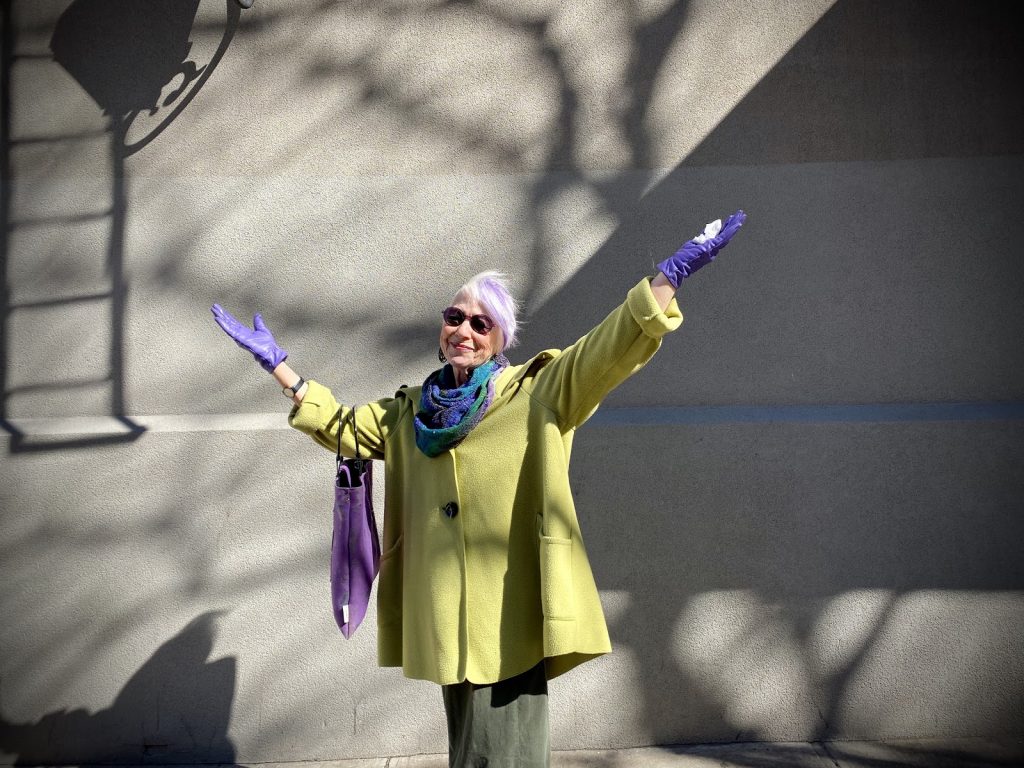 I’m living my life as normally as I can and as optimistically as I can, but with responsibility and caution. Keeping calm and living fully is part of that daily optimism that keeps me going. I mean this: Stay pretty. Stay upbeat. Stay bright with colors.

However, you know when you get a little extra sneeze or a little extra throat clear, you get a little aware and nervous. I push that out and make it pass. Matter of fact, I just purchased 22 cards to send as invitations for a gathering next month. For a moment, I said, “Why am I doing this?” I mean, I made the plan way before this horrible epidemic. But I’m just moving forward.

The quiet, the minimal spirit on the street is a source of sadness. But it’s a reminder. Let people live their life the way they feel is fitting for them. In humanity and society, we find in life that out of bad comes good. So let’s think that out of universal concern and shared concern. That says something too in terms of being united, in terms of who we are in the world today. So maybe that’s something that will be good. I don’t know.

The stores are taking advantage of this opportunity, raising the prices of sanitary spray and things. Is that a capitalistic thing? What would Bernie Sanders say, in terms of using the opportunity to charge $12 for a little spray or $4 for a little Purell? Is it human? Where does it come from? Are there any stores out there who are not raising prices?

We must go on with our lives. In these circumstances, you have to laugh. Or else you’ll cry.

I’m trying not to shop. I needed milk for my coffee, that’s all I came out for. Let me tell you that I am an eternal optimist. And I hope this will all pass — when we elect a Democratic president. Hopefully, the CDC will just ignore our president and do what they have to do. There are other countries that have enough testing — why don’t we? It’s criminal.

And our cultural institutions. What if the Met can’t do the operas? They’re bringing stars in from all over the world. They can’t do that anymore. And theaters and museums. There are some excellent exhibits right now that I want to see, but I don’t know if I want to go.

In case you hadn’t realized, I’m a senior citizen. Plus, I have a vulnerable lung situation. So I’m really very careful. I didn’t go to Westchester where my granddaughter was going to sing because I didn’t want to go on the train and be with people.

I’ve worked in this spot for one and a half months. Right now, business is not so good. Maximum people are not outside. They are staying in their homes.

M wife and I live in Jackson Heights. I am Bangladeshi. I have two sons, one lives in the U.S., the other lives in Poland.

We are all careful about the virus. This is very sensitive. It’s a new virus, so this is difficult. 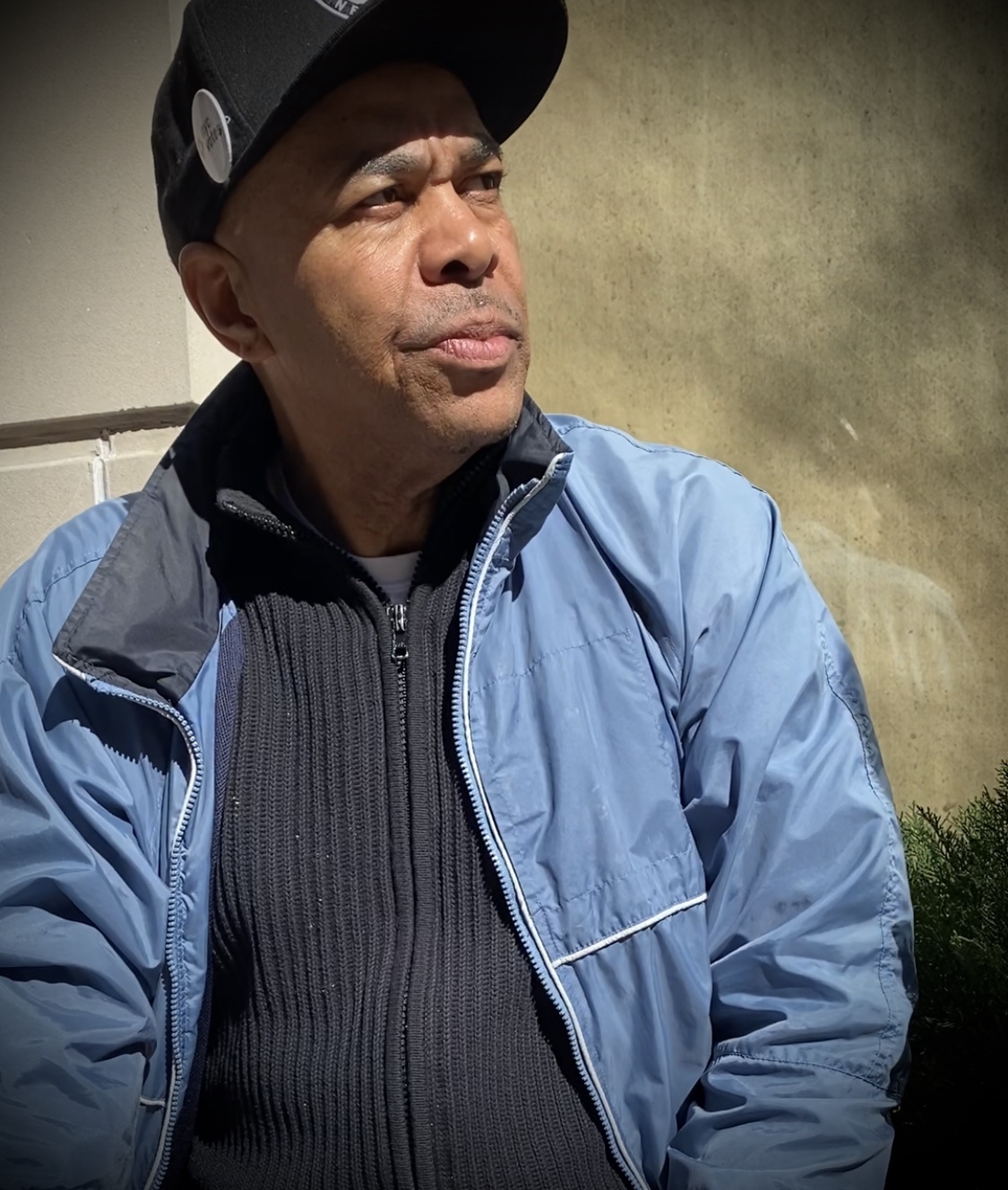 Healthcare — a lot of people need it. A lot of people don’t have it. We need to pass legislation on healthcare. All I know is, whoever is the next president has got to talk about how they’re gonna take care of everybody without us paying one penny of it. The government has to step up and do that.

Of course, I’m concerned about the virus. But one thing hasn’t been said. They never told us that they knew this was coming. Then somehow it was already here. We needed to know what’s going on before the infection became a pandemic.

I watched a movie with Brad Pitt, World War Z. There was a virus coming that was so contagious, you couldn’t contain it. They built the vaccine for it. Once they developed the vaccine, Brad Pitt injected himself. Then zombies weren’t touching him, but they were touching everyone else. It was very advanced to have made that movie, and now today the same situation is happening.

Our health is more important than anything. Some people are hungry for money. And we have to suffer for it.

I’m good. My blood is good, I’m strong, I feel happy. And I’m gonna keep going that way. My concern is for other people. Some people are not worrying about it and some people are. When you get on the train, you see somebody has a mask, the other one doesn’t have it. Eventually, they’re gonna make the vaccine, everyone’s gonna want it from all over the world. That’s when they gonna make the money.

I have food for two or three months. I’m able to. I don’t know about somebody else.

I tell you, watch that movie — World War Z. It’s about zombies getting over the wall to get the vaccine.

Amber Kelly
(Dog walker in the Wall Street area, lives in the Bronx)

I’m not really worried. Everyone panicking due to everything the news is saying and what they’re not saying. They’re just trying to make a mass panic.

Since I’m a dog walker, I don’t think my work will be affected. I hope not. I hope none of my dogs get sick.

I’ve bought extra hand sanitizer. But I buy a lot anyways. I work with dogs.

I do see a lot more face masks and a lot more people being overall rude. When people don’t cover their mouths or don’t cover their nose, they’re being extra rude. I also witnessed one lady being extremely racist. Because someone came on the train who was a certain ethnicity, she automatically covered her mouth.

Just the other weekend, I took the Chinatown bus by Canal Street. And I’ve never been on a bus so empty. Everyone refused to take that bus. I mean, you guys realize where our face masks come from, right?

Marcia Robbinson
(From the Bronx, works in the Financial District)

I am feeling worried, yes, because there’s a large Asian community here in this area, also in Queens and New York in general. And the virus is here. I was just looking on Twitter and there’s already 100 plus cases diagnosed. So I am concerned about it.

If they shut the city down, how am I going to get into work?

People around me in the Bronx aren’t really talking about this. I know they are avoiding all the Asian supermarkets and the stores. I mean it shouldn’t be that way, but people are afraid.

I have two sisters, one is in New Jersey and one is in Atlanta. Most of my family is back home. My parents are from South America. They’re very concerned. They asked me about it, but what am I gonna say? It hasn’t affected me or anyone I know. 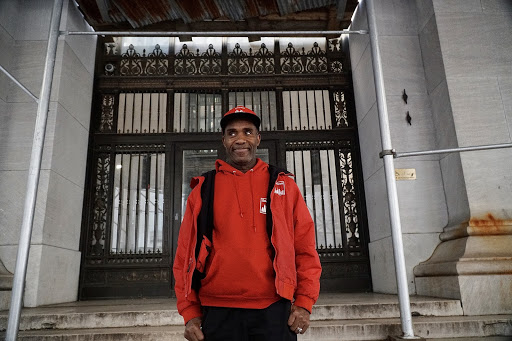 I work outside, so I am very worried. It’s a dangerous disease. I’m scared for all my coworkers. We could all get sick. I hope the president and Congress and senators can come up with a solution very fast, because a lot of people’s lives are in danger.

I wear gloves and I wash my hands thoroughly. I don’t like the masks though. It’s kind of scary, walking around with a mask on your face.