The Indypendent
Menu
A Free Paper for Free People
The owners of Ras in Crown Heights, Brooklyn plan to reopen. They just don't know when.Photo: courtesy.

About a month ago, I took on a third part-time job, waiting tables at Ras, a new vegan Ethiopian restaurant in Crown Heights, Brooklyn.

Walking out the door of the cozy restaurant into the high-noon winter sun on Franklin Street, I sensed reality as I knew it slipping out of my grasp.

The first few days on the job ran smoothly. At the soft opening, I found myself weaving through friends and family of the restaurant, balancing hot platters of plant-based Ethiopian classics and rolls of injera bread. The dishes reminded me of home, as Ethiopian and Egyptian culture share some similarities. I felt I could connect to the experience the patrons were having as I served them fasolia, my favorite dish: sautéd string beans, carrots, onions, garlic and ginger.

The welcoming atmosphere and Saturday night DJ performances brought locals in from the street. The restaurant was going to be a neighborhood hot spot within a couple of months.

“It was booming,” says Ramon, a fellow server who also helped out in the kitchen, recalling the initial excitement among employees and patrons at Ras before the pandemic rendered it moot. “We were getting a lot of great feedback. I believe that we all wanted it to work, collectively, and the reviews were great.”

He also loved the food.

“I am an Ethiopian food connoisseur,” he said. “That’s my favorite kind of food, and I eat it all the time. I felt that there really was no competition for them.”

The last shift I worked was on March 14, just as cases of COVID-19 began to mount in New York City. The staff was sent home early after hardly anybody came in during the first two hours of Saturday brunch. As we clocked out, the air hung heavy with the silent knowledge that we wouldn’t be coworkers for much longer. Walking out the door of the cozy restaurant into the high-noon winter sun on Franklin Street, I sensed reality as I knew it slipping out of my grasp.

Amanda, also a waiter at Ras, felt the same.

“After work that day,” she said, “I went grocery shopping, got some essentials, and made my plan of what my new reality was going to be. That upcoming week, I created a budget and made a timeline to see how long I could last off the money I had. I had probably two months, longer if there’s a rent freeze.”

At best, she figures she can make it through summer, after that she will be “basically drained.”

“I’m keeping $300 to the side for a plane ticket if I have to leave,” she said. “No one knows what to do. Should I be thinking of the worst-case scenario, should I stay positive? Should I plan to get these government checks? I’m trying to just stay as realistic as possible and have a safety net and have a couple of back-up plans. Like where will I go if I have to leave?”

Three days after that Saturday shift we received an email. Ras would be temporarily closed.

“It’s an unfortunate reality for us,” wrote Milka and Romeo Regalli, Ras’s owners. “[We’re] having to step back and see our business through a new lens. For a small business, every day, every moment is crucial. This is just beyond our control.” 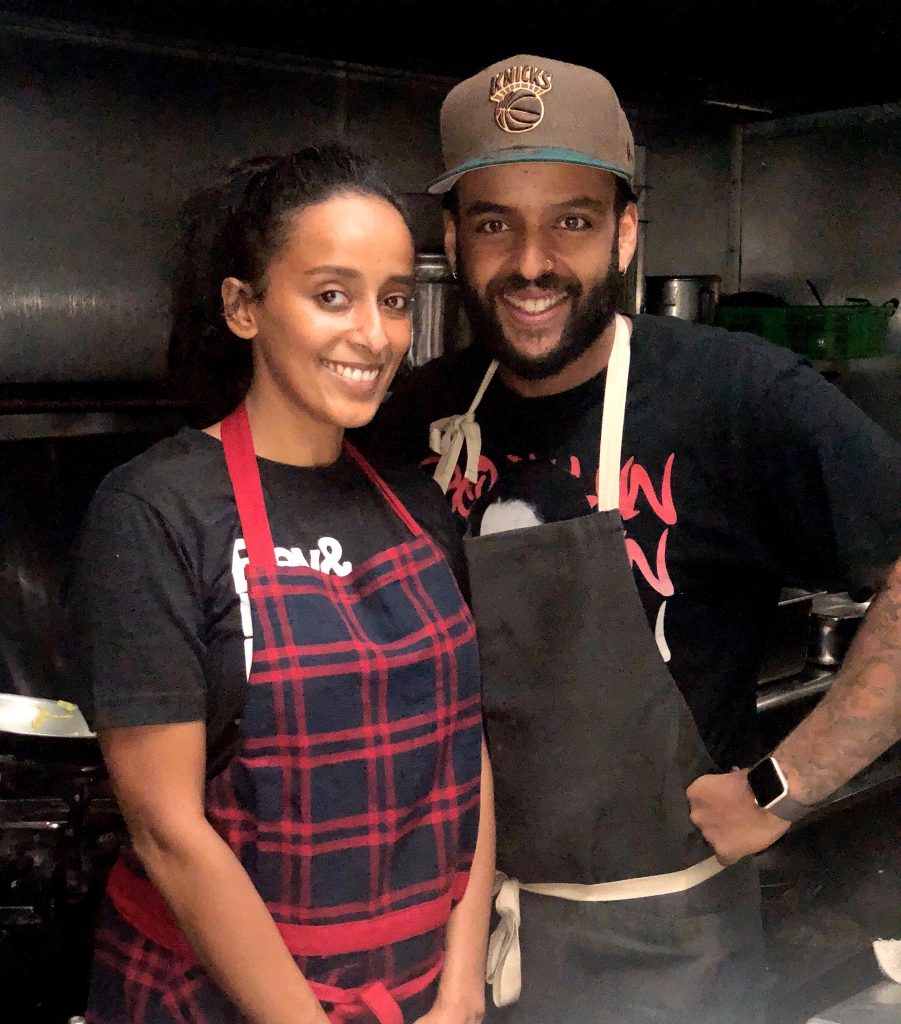 Milka and Romeo are the most approachable restaurateurs I’d ever worked with. A young couple in their 30s, they greet people with hugs and value their employees and the community they serve. The couple met at Awash, Milka’s family’s restaurant in Cobble Hill, which they took over in 2015. They’d been dreaming of opening their own restaurant for years.

When I read their email, I was stressed, but I could hardly imagine what it would feel like to have a business, a lease and a staff spiraling away from you.

“We felt a lot of confusion and uncertainty,” Milka later explained over the phone. “We had to be practical that the economy is not going to be in the same state when we open back up. We felt that we had to be honest with our employees, and let them know that they may never get their jobs back.”

From the moment they signed the restaurant’s lease last year the pair had worked tirelessly.

“A lot of people have the funds, they have people managing and backing them, but we didn’t have that,” Milka said. “Up until the very end, we were not sure that Ras would be opened. There were so many pitfalls and roadblocks.”

They made it past all the hurdles but the victory was short-lived.

COVID-19 is not only a public health disaster but a monumental shift in the global economy, with stocks plummeting faster than they did during the Great Depression. The virus may be indiscriminate with who it infects, but the economy does not haphazardly designate winners and losers. Small, family-run, community-oriented businesses like Ras are in dire straights. The $2.2 trillion stimulus package that passed on March 27 bails out giant corporations, while relying on big banks to provide loans to small businesses.

Milka and Romeo have already invested $500,000 in Ras and are on the hook for $400,000 — a combination of credit card debt and money owed to banks, investors and family members. They are unable to apply to many loans because of their nascent status.

“We looked at the small business loans,” Milka told me, “but the problem is that you have to have been open for two years, so we’ve thought of taking a personal loan. I don’t know what the end result is going to be in terms of finances.”

Despite the financial hot water Milka and Romeo are in, they are adamant about re-opening their restaurants.

“We’re not going to shut our doors for good,” Milka says. “We know that for sure. Not any of our doors. Romeo and I are used to biting the bullet and doing as much as we can. And if it means just the two of us working [at Ras] until we make things happen, it’s going to happen.”

The couple has tried doing take-out at Ras, but quickly decided it was too risky. For now, they’re not open for business, but you can plan to eat at Ras as soon as this city comes back to life, safety conditions permitting.

Ramon is not sure what his next move is, but goes up to his roof every day to catch some sun, and is taking life “moment by moment.” He recently celebrated his birthday, and the restaurant he was forced to choose to satisfy his craving for Ethiopian cuisine was a far second to Ras.

Amanda plans to stay in New York as long as she’s able. She’s supposed to start a Ph.D. program in food studies at New York University this fall.

“This is really gonna shift my research,” she said of the pandemic. “There’s definitely no shortage of food, but people are in the mindset of wanting to know where their food is from and how to grow their own.”

For my part, I’m devastated and confused. On good days, I think about nature getting its breath back, but on bad ones, there seems to be no end in sight. Everyone I know is experiencing financial hopelessness, and it doesn’t feel like one $1,200 check is going to fix that. How long will the effects of the coronavirus rebound?  I feel for those who are broke, who are unprotected by the governing powers, and for all of us, who are experiencing a collective desperation.

I mourn for Milka and Romeo, for our communities, for those who have died, those who have lost loved ones. But I am also reminded of the old Wobbly saying: Don’t mourn, organize. Both are called for.