The coronavirus pandemic has overwhelmed the U.S. healthcare system and exposed its deep structural weaknesses, nowhere more so than New York City. So what would a healthcare system that put people over profit look like?

In the South Bronx, Dr. Melissa Barber is putting into practice lessons she learned more than a decade ago from her training as a medical student in Cuba at the Latin American School of Medicine, or ELAM as it’s known by its Spanish initials. For Barber, healthcare doesn’t start with an ambulance ride to the hospital but with community organizing and a deep familiarity with the needs of one’s neighbors. Barber is also the coordinator for the U.S.-Cuba scholarship program that provides free medical school training in Cuba for aspiring doctors who commit to return and serve in their communities.

Amid the pandemic, she recently took a break to talk with The Indypendent about how the South Bronx is mobilizing against COVID-19 as well as the Cuban medical system that has inspired her life’s work.

Can you describe the situation in the South Bronx, and what you and the others you are working with are doing to confront the pandemic?

Here in the South Bronx we’re dealing with the same thing as other cities and states: a rising number of cases, super-packed hospitals that cannot hold the quantity of people that are coming in to be treated or assessed with fever symptoms, or pneumonia and flu-like symptoms. Many of us who are at the super-local level are taking a community-organizing approach. We’re galvanizing all our supplies and resources so that we can be a source of support for what’s going on in the community. We have a coalition of groups — South Bronx Unite, the Mott Haven Mamas and many of the local tenant associations — that have gotten together.

‘Anyone who has been trained in the Cuban health system knows how to assess a community’s health and in emergency situations survey what’s going on.’

One thing I was telling my tenant association is we need to address who are the vulnerable people in our community. That includes the elderly, people who have infants and small children, homebound people, people that have multiple morbidities and are really susceptible to a virus like this one.

We’re trying to map the community, assess to see where our vulnerable points are. We’re trying to be a resource to the needs that might arise in this situation. We have been able to provide a lot of the medical resources, such as gloves, masks,Tylenol, Motrin. For families that have lost jobs and have children that need food, we’re pointing them to resources in the community that can help them. We’re also coming together to raise money so that we can actually buy groceries for families that need it.

Is the approach that you are taking informed by your training in Cuba?

Absolutely. Anyone who has been trained in the Cuban health system knows how to assess a community’s health and in emergency situations survey what’s going on. It’s about being able to assess who are the vulnerable people that are susceptible to this disease and keeping an eye out in case that may arise. We want to make sure nobody falls through the cracks and make sure that we have all the supplies that may be needed if people need to self-contain or to help themselves until they can get to the hospital where they can be appropriately treated.

So this is an approach to medicine that is as much about community organizing as repairing bodily ailments.

Absolutely. One thing we do here in the United States is divorce the public health aspect and the medical aspect of things and we call them two separate entities. But anyone who knows public health and medicine knows that they are intertwined. Community organizing allows you to be vigilant to what’s going on and to have the pulse of the community. But you also have to have the healthcare infrastructure that’s necessary to actually diagnose and treat people to make sure they don’t fall into critical areas because they’re not screened or caught in time.

One place that’s been hit particularly hard by COVID-19 is Northern Italy where there have been many thousands of deaths. Cuba recently made international headlines when a brigade of several dozen of its doctors arrived in Italy to assist their Italian counterparts. Can you describe the mindset in Cuba behind sending doctors to Italy and elsewhere when Cuba is far from being a wealthy nation itself? 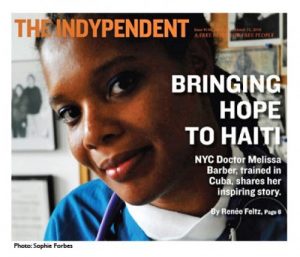 From the belief that healthcare and education are a right for all came the idea of internationalism. Cuba believes it is its brother and sister’s keeper. So when a sister nation is hit by disaster or seeks access to healthcare or health education for its people, Cuba will step up. It is one of the basic principles of who it is as a nation.

That’s why Cuba has sent medical brigades not only to northern Italy but also to serve the people of Suriname, Nicaragua, Venezuela, Jamaica, Grenada and to China to combat the COVID-19 virus. The doctors who go on these missions understand that they’re often going to some of the most remote regions of these countries and are making healthcare available to people who would normally not have access to it.

In the past year, newly empowered right-wing governments in countries such as Brazil and Bolivia have given Cuban doctors the boot. Yet now we are hearing that the Brazilian government may want the Cuban doctors to return as the pandemic accelerates in their country. Can you tell us anything more about that?

Unfortunately in the United States, we have a history of demonizing Cuba. We have also provoked many other nations to get on board with our attacks. So a lot of what was done in countries like Brazil that have right-wing governments was to declare the Cuban doctors “medical terrorists” or depict them as ill-equipped and not trained well enough. We know those are lies, and of course, if they weren’t lies, then those same nations would not be asking for those same doctors to return.

As I said before, many of the brigades that are going into these nations are actually going to the places where most doctors from these nations will not go. The unfortunate price of many of the doctors getting expelled from Brazil, and from other countries, is that it actually left a void. The people who didn’t have access to medical care before went back to not having access. The punishment is felt by Cuba, but it’s really felt by the people who are no longer being served.

How are the Cubans responding to the pandemic in their own country?

Third, fourth and fifth-year medical students are the ones knocking on the doors to make sure no one has flu-like or respiratory symptoms that are specific to the coronavirus. When they encounter a person with those symptoms, they make a point to get them to a place where they can be screened to make sure they don’t have COVID-19. People who test positive are sent to one of the tropical medical centers where they are treated.

The government is urging social distancing and that people not participate in gatherings. They did say that for at least a month tourists would not be allowed in the country to make sure to get a damper on the cases of COVID-19 that they have now. They are able to handle a crisis like this because they’ve dealt with emergency situations before. They’re dealing with a lot of shortages right now due to the U.S. embargo, but as a nation, they’re unified, and they’re doing what’s necessary to make sure that COVID-19 is not spread more widely.

Finally, can you talk more about the scholarship program you oversee that makes it possible for working-class students to study medicine for free in Cuba.

We are affiliated with the Interreligious Foundation for Community Organization-Pastors for Peace and have been facilitating the ELAM-U.S. medical school scholarship since 2001. People who are interested in the program should go to IFCOnews.org. On our website, we have a medical school tab that explains the requirements of the program and the standard medical school curriculum.

Click here to apply for med school in Cuba.

It’s a seven-year program. Students receive a free medical education as a part of the scholarship. Their uniforms, room and board, and meals are included in that education. They will be trained to become one of the best doctors in the world. The stipulation of that scholarship is that those students will return to serve underserved communities here in the United States.

In the application process, we do require that students have some pre-med courses under their belt. We get a lot of calls from people that are from other nations who are living in the United States. We can only facilitate scholarships for U.S. and mainland Puerto Rican students. Every country has its entity and its government that deals with facilitating the scholarship for non-U.S. students.

We do encourage the students if they are interested in medicine, if they are interested in serving underserved communities in the United States, definitely do come and look at us as a viable option. We also have extended the application deadline this year. Our normal deadline is March 15. Given the coronavirus situation, we have extended the deadline. We don’t know when we’re going to cut that off. So people who are interested can still apply for the scholarship at this point, and if they have any more questions, they can access the website and get a hold of us, or call us at 212-926-5757 ext. 5.