The Indypendent
Menu
A Free Paper for Free People
Photo: Pause the System/Facebook.

Even amid the coronavirus pandemic, people around the world are finding ways to keep fighting for the causes that matter to them. Despite the restrictions of social distancing, people are coming up with new ways to protest — online, in cars, from balconies and, at a safe distance, in the street. Here are some of the creative new approaches.

Demonstrating From the Security of Home

People all over the globe, from New York to Singapore are clappng from their windows and balconies to show gratitude and support for essential workers that are on the frontlines of the fight against the COVID-19 pandemic.

Footage of Italians singing ballads or clapping along to “Bella Ciao” from their balconies in a show of solidarity has made rounds on the web.

Brazilians have been banging kitchenware and chanting “Fora Bolsonaro!” or “Get out, Bolosnaro!” from their verandas for weeks. The protesters demand the ousting of President Jair Bolsonaro, citing his skepticism and dismissal of the pandemic.

People in Alberta protested from their cars for healthcare protections as their legislative assembly convened.

In Denver, immigration activists led a car protest demanding that the governor take Immigration and Customs Enforcement patrols off his list of essential activities and release detainees.

In Los Angeles, housing activists held a car caravan to demand measures be taken to protect and provide housing during this crisis.

Activists and community members shut down traffic for two hours in Philadelphia, demanding the release of non-violent prisoners and detained immigrants. People chanted “free our people” and “end cash bail” in front of City Hall, some from atop their cars.

Some continue to make a stand with their bodies while keeping their distance.

A London group called “Pause the System” wore hazmat suits as they demonstrated outside Downing Street in London, protesting the government’s inaction towards the crisis.

Nurses at Jacobi Hospital in the Bronx spaced themselves on the hospital lawn to protest their lack of personal protective equipment. They wore masks and protective gear and held signs reading “Healthcare Justice Saves Lives” and “Patients before Profits.” Healthcare workers around the United States have launched similar protests as well. 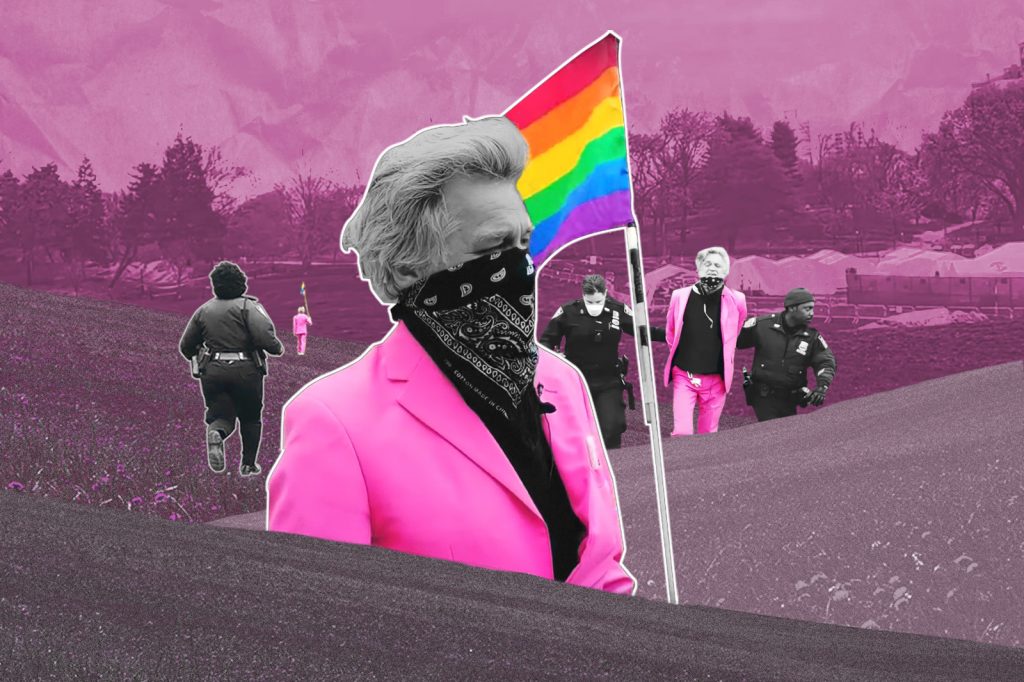 The activist and performance artist Reverend Billy Talen planted a rainbow flag outside of a tent hospital in Central Park run by the bigoted Samaritan’s Purse organization. He was tackled by NYPD officers and spent the night in jail.

Prison Reform advocates protest the first COVID-19 related death of a New York prisoner, Juan Mosquero. Advocates gathered outside of Sing Sing Correctional Facility to hold a vigil and noise demonstration with appropriate social distancing. They are calling on Gov. Andrew Cuomo to grant clemency to incarcerated individuals, particularly elderly inmates who pose minimal risk to society but are at the highest risk of infection.

General Electric factory workers walked out to demand that the company’s jet engine factories begin to make ventilators instead. Workers held a silent protest, standing six feet apart at the aviation facility in Lynn, Massachusetts, while union organizers held a march, distanced from each other, at GE’s headquarters in Boston.

With millions of people suffering the economic consequences of COVID-19, tenants in New York and other major cities are organizing rent strikes.

Inmates at Rikers Island staged a two-day strike last month, refusing to leave their cells until they received soap and cleaning supplies.

Amazon workers held a walk-out at an Amazon warehouse in Staten Island, accusing the company of understating the number of people who have contracted coronavirus. The demonstrators demanded higher hazard pay, child care and two weeks of sick leave to be able to quarantine. Amazon workers in Italy also held a strike in protest of the corporation’s response to the virus.

At fast-food establishments in Los Angeles and the Bay Area, workers staged strikes demanding major chains do more to ensure their safety.

Exploiting a Crisis, Cracking Down on Dissent

In some places, protests have been broken-up on grounds that they violate social-distancing measures. The anti-government protest movement continues in Hong Kong, despite a recent rule barring more than four people to congregate. Hong Kong police stopped people from gathering at a transit station for a monthly event held by the movement.

Some demonstrators speculate that the recent rule is aimed at squelching resistance. According to the South China Morning Post, “A 21-year-old student, surnamed Chan, criticized the government’s regulations, saying they were a further crackdown on freedom of assembly masquerading as an anti-epidemic measure.”

The French Yellow Vest movement has continued its regular Saturday demonstrations, despite social-distancing measures adopted by the government. When hundreds of protesters gathered in front of the Montparnasse train station in Paris, riot police were deployed, using tear gas and stun grenades to disperse the crowd.

A long-running sit-in protest against Prime Minister Narendra Modi’s citizenship law, which bars Muslims from a path to citizenship, was finally broken by police. “Dozens of people, many of them women, have been staging a sit-in protest since early December on a street in the Shaheen Bagh neighborhood, which has become a focal point for opposition to the law seen as discriminating against Muslims,” reported Reuters.

While protesters are using creative methods to raise their voices, they are also dealing with making rent, feeding their families, and avoiding the virus. In the United States, local governments are seizing the opportunity to pass laws that bring new consequences to demonstrating. Kentucky, South Dakota, and West Virginia have already passed new laws that deem gas and petroleum pipelines “key infrastructure” and invoke felony charges for damage done to it. At least five other states have similar legislation in the works.

And the Trump Administration is taking advantage of the fact that people can’t protest in the ways they used to. On Friday, March 3, as the United States reached 100,000 confirmed cases of coronavirus, the Massachusetts Mashpee Wampanoag Tribe learned that their land trust would be revoked and their reservation would be disestablished. The Wampanoag people vow to fight for their land, which will be difficult in a time where demonstrating, a stronghold of land rights organizing, is minimized.