The pandemic we find ourselves in has made one thing unbearably clear: Our society is structured to lift the rich and powerful and to ignore the needs of the working class. Here are five films currently available to stream that tell stories of people struggling in countries across the world and sometimes in worlds different but not unlike our own.

Many of us are housebound now, but these films take us from Kobe, Japan, to Dakar, Senegal, to Oakland, California. Some are stories of resistance and revolution, some clear-eyed narratives of quiet desperation, but all of them show how the decisions of the wealthy and powerful have repercussions for the most vulnerable among us: people living in poverty, children, even animals.

Sorry to Bother You (2018)
Available on Hulu

Loopy, cynical, and surreal, this dark comedy from musician Boots Riley takes place in an alternate-universe Oakland that feels uncannily close to bleak reality. When the film begins, Cassius (Lakeith Stanfield) is broke and disaffected, living in a dingy converted garage and hoping to pay his overdue rent with a new telemarketing gig.

Three Anti-Capitalist Documentaries to Stream During the Shutdown.

His secret weapon: being able to affect a “White Voice” that he uses to climb the corporate ranks and become a power caller.

Riley doesn’t use this plot twist as a throwaway joke, but as a way to connect race class, and privilege.

Danny Glover, in a brief cameo, explains, “A White Voice isn’t just being nasal. It’s…sounding like you don’t have a care. Got your bills paid. You’re happy about your future.”

The narrative vaults between absurdist gags and the crushing realities of survival in a capitalist society, but with an insouciant touch that never tips into gloom. A late-movie twist into body horror via grotesque corporate bioengineering plays on the capitalist desire to squeeze ever-more labor from the working class.

Sorry to Bother You even finds time to cover the basics of salting: a labor tactic where an organizer gets a job in a non-unionized workplace with the intention to form a union. After finding out Squeeze, played by Steven Yeun, is a salter, another character asks, “So you just go from place to place, stirring up trouble?” He replies: “Trouble’s already there…I just help fix it.”

Delightfully strange, defiantly political and unapologetically anti-capitalist, it’s thrilling to see solidarity on screen through the lens of dystopian sci-fi.

Atlantics tells a tale of loss, grief, and class conflict like a melancholy dream or a hypnotic nightmare.

After months of unpaid labor on a construction site, a group of young Senegalese men set out for Spain, where they hope to make a living wage. After weeks without contact, they are presumed lost at sea.

Back home, Ada, a young woman unhappily engaged in an arranged marriage, mourns her lover, Souleiman, one of the young men. But then her friend tells her that she just saw Souleiman, alive — setting fire to Ada’s new marital bed.

Atlantics is hard to define: it’s a ghost story, a revenge story, a teenage love story and a coming of age tale. It’s the first feature film from Mati Diop, a French-Senegalese actor-turned-director and now the first black woman to win the Grand Prix at Cannes.

On a visit to Senegal a decade ago, a young man said to her, “When you decide to cross the ocean, it means that you’re already dead.” Those words haunted her enough to lead her to make this film years later.

Ada and her friends are stubborn, sometimes sullen, absorbed with their romances and struggling to define themselves on the cusp of womanhood. In other words, they’re teenagers. When the uncanny is introduced into this recognizable world, it’s with a calm acceptance that has the supernatural existing alongside Ada’s grief and frustration.

The simmering resentments and desperation of families living in poverty is always there, bubbling just below the surface.

Ada, still grieving for Souleiman, is scolded by her family when she refuses to put on a happy face for her older, wealthy fiancé. She resents his expensive gifts and the power he has over her due to his wealth.

Meanwhile, At the hands of angered spirits, the owner of the construction firm, whose laborers were building a strange, eerie luxury tower on the shores of Dakar, must finally concede to the injustices he inflicted on his workers. Perhaps this, as much as the spirits of the dead seeking revenge, is what sets this film in a world unlike our own: at least here, the perpetrators of economic oppression face consequences. 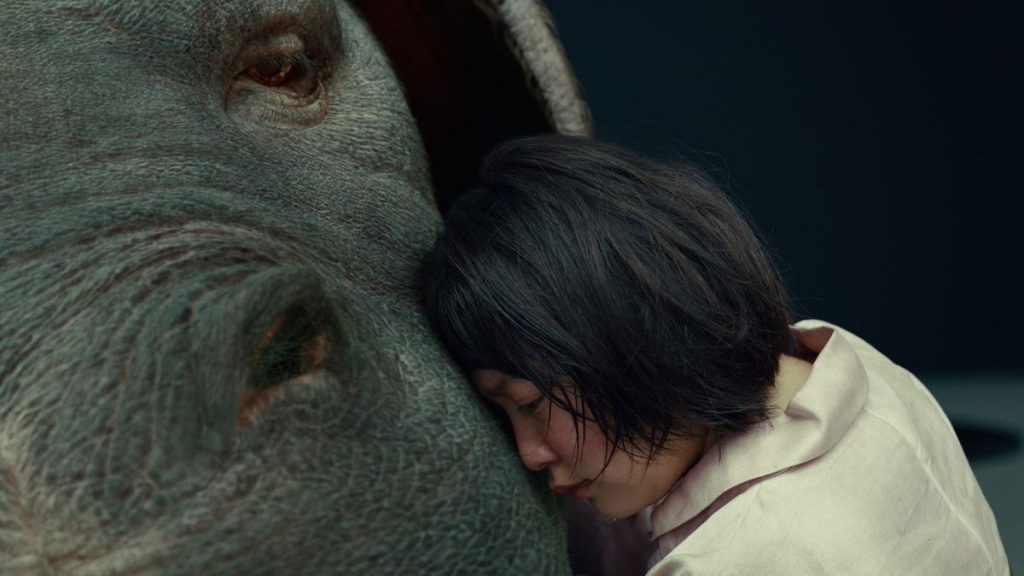 Directed by Bong Joon-Ho, best known now for Parasite, Okja wears its heart on its sleeve. Earnest, explicitly anti-capitalist, pro-animal liberation — it’s an odd blend of sincere, child-like storytelling combined with cussing and a moderate amount of violence. This could be a great film for the older tween with a bent towards social justice and activism (if your older tween can handle tense situations, slaughterhouse scenes and regular f-bombs).

Okja could be seen as a bleak mirror-universe Charlotte’s Web.

Mija, the young girl who has taken care of Okja her entire life, finds out in a moment of horror that Okja is actually a super-pig: a genetically modified beast designed to grow rapidly into a massive creature ready for slaughter. And now, the corporation who created Okja, run by Lucy Mirando (played by Tilda Swinton), wants her back, and Mija’s porcine friend is destined for torture and death.

This leads to a rescue mission, which ends up snowballing out of control to include the Animal Liberation Front, a militarized NYPD acting at the whims of the corporation, break-ins into a factory farm, and a memorably deranged performance by Jake Gyllenhaal as a sellout zoologist working as the face of the Mirando Corporation.

The Animal Liberation Front is a group of passionate but flawed young folks, and Bong allows them to make the wrong decisions for the right reasons and to learn from their mistakes. But it is Mija who is the moral center of the film, which connects the cruelties of corporate oligarchy to injustices inflicted on animals as well as humans. Okja’s themes of corporate greed, capitalist wickedness, and animal liberation aren’t subtle, but Bong’s depiction of defiance, redemption, and love carry a worthwhile message.

Released on the cusp of the 2008 recession, Wendy and Lucy feels more relevant than ever today. Director Kelly Reichardt depicts the criminalization of poverty and the pressures of living paycheck to paycheck with an attention to detail and compassion seen in few other films.

Wendy, played in a watchful and internal performance by Michelle Williams, doesn’t ask for our sympathy. She’s given no backstory and little dialogue. We don’t know why she’s alone, living out of her car with her dog Lucy, trying to get to Alaska in time for its lucrative fishing season. But we do know that she has been let down by a capitalist system lacking safety nets.

At one point, Wendy’s arrested for trying to steal dog food for Lucy, and as she’s being fingerprinted at the police station, seems resigned rather than agitated. It could be seen as resilience or something worse: the beaten-down calm of a young woman too accustomed to the hardness of life.

Wendy and Lucy feels almost documentary-style in its minimalism: the camera is restrained and there is no musical score. It has the focus and gravity of Italian neorealist films and the same implicit message: that normal people, living normal lives, are worthy of our time and attention.

Untethered to a job or family, Wendy must rely on the unreliable kindness of strangers. And yet there are indeed strangers who show her almost heartbreaking kindness and who bring light into this often-bleak film. A good-natured security guard tells her, with the air of a man who has been there, “Can’t get an address without an address, can’t get a job without a job…it’s all fixed.”

By the end of the film, we have experienced Wendy’s trials, in stifling detail, right alongside her. How many of us are one car breakdown away from a cascading series of small tragedies? Should any person have to live on such a razor’s edge? What is our obligation to each other? Reichardt gives us no easy answers, but she documents Wendy’s quiet struggles and heartbreak with the gravitas they deserve.

Grave of the Fireflies (1988)
Available on Hulu

The grand arena of war is narrowed down to two children struggling to survive the final months of the Second World War in the bombed-out ruins of Kobe, Japan. Director Isao Takahata co-founded Studio Ghibli with his creative partner Hayao Miyazaki (Spirited Away) and the “Ghibli touch” is clear in the precise, delicate animation and beautiful ligne-claire style of this animated film.

Loosely based on the experiences of novelist Akiyuki Nosaka and his semi-autobiographical short story of the same name, Grave of the Fireflies moves slowly and relentlessly to its inevitable end. Takahata has a keen eye for the rhythms of the precarious way of life the siblings must adjust to in wartime, with new rules and dangers to be aware of.

Characteristic of Ghibli films, there are moments of beauty, too.

One day, teenage brother Seita takes his toddler sister Setsuko to the sunny beach where they used to have carefree picnics with their mother. (The ocean seems the only thing unchanged by the relentless air raids by American bombers.) Another morning, they set up house in an empty bomb shelter, squealing and laughing together playing games of pretend in the verdant hills just outside town.

Takahata insisted his film was not explicitly anti-war, but in its brutal and finely-observed focus on the victims, it’s impossible to see otherwise. From the unsparingly grim opening scenes, which leave no doubt as to the doom the children face, to the gorgeously haunting end, Grave of the Fireflies shows how the evils we do to our fellow humans last long after the bombs have stopped dropping.