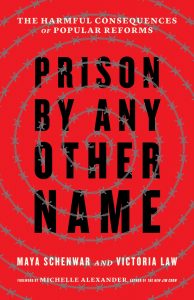 When most of us think about house arrest, ankle monitors or mandatory enrollment in drug or alcohol counseling in lieu of jail, it sounds good — a humane alternative to being caged. But as Maya Schenwar and Victoria Law’s latest book, Prison By Any Other Name, makes clear, what at first glance looks like a kinder, gentler approach to criminal justice is a punitive and dangerous expansion of policing and surveillance.

Michelle Alexander’s searing foreword spells out the dangers of “unwittingly or wittingly converting homes, neighborhoods and entire communities into high-tech, digital prisons,” a shift that has made near-constant scrutiny by law enforcement the norm in many low-income communities of color.

Take electronic monitors. Schenwar and Law interviewed dozens or people — prisoners, former prisoners, and prison reform activists and abolitionists — to present a compelling, eye-opening account of being locked at home. In one case, a woman could go no more than 100 feet without permission from her probation officer, making something as benign as taking out the garbage or getting her mail impossible. Worse, she could not walk her kids to school, meet with their teachers, attend family gatherings or socialize with friends or neighbors without the explicit go-ahead of her overseer.

Even more troubling, Schenwar and Law report that the approximately 200,000 people who are currently using electronic surveillance gear typically have to pay for the devices themselves. In addition, they write, they can be asked to pay for mandatory urine screenings — even if their crime did not involve drugs or alcohol — each time the tests are administered.

This, of course, is saving state, city and federal prison systems millions, while forcing people who have been convicted of crimes to pony up every nickel they can scrape together from jobs—yes, some people are allowed to go to-and-from work, but virtually nowhere else — or rely on the generosity of donating strangers.

Then there’s the issue of mandatory rehab for drug or alcohol abuse. Many programs, Schenwar and Law explain, involve harsh discipline, isolation, and forced participation in therapy. Nonetheless, requiring participation is the go-to strategy of the country’s 3,100 Drug Courts. The courts, dubbed a major innovation when they were created more than 30 years ago, typically defer prosecution of first-time and low-level offenders so that rehab can be completed. Such programs, they write, eschew methadone and buprenorphine, substances with a proven track record of helping reduce reliance on illicit drugs. What’s more, they explain, the Courts “promote police vigilance,” which often leads to arrests for small infractions, ignoring that for most people, sobriety is not linear but involves a long, arduous back-and-forth between abstinence and use.

Similarly, the pair write, mandatory psych treatment is particularly punishing for the 35,000 people who have been involuntarily committed. Particularly galling, they argue, approximately 5000 people are presently languishing in psych wards, despite having completed their prison sentences. The reason? Schenwar and Law write that certain people — most notably sex offenders — are seen as an inherent threat to society and are indefinitely warehoused for custodial oversight.

But here’s the whammy. Contrary to Law & Order SVU, Schenwar and Law write that “sex offenders have some of the lowest recidivism rates of any crime.”

Other forms of surveillance, including probation that requires absolute adherence to curfews, complete abstinence from drugs and alcohol and total avoidance of specific people and places, are presented as similarly senseless, leading massive numbers of people to be returned to jail for infractions as picayune as drinking a beer. It’s maddening. And amid the COVID-19 pandemic, it’s lethal. In New York City for example, the first prisoner at Rikers Island to die of the coronavirus, Michael Tyson, age 53, was being held on a parole violation.

What’s more, Prison By Any Other Name addresses a slew of other well-intentioned but ineffective measures, from participating in mandatory prostitution diversion programs for those convicted of sex work, to the Sex Crime Registry that puts a literal notation on the passports and drivers’ licenses of those on it, to the ways that the parenting of low-income people is scrutinized by child welfare authorities.

The book also zeroes in on community policing, sold as making community residents and police “partners in fighting crime,” but that actually increase the number of arrests due to constant monitoring of streets, parks and hang-outs. In addition, the increased presence of police in public schools across the country — the well-documented school-to-prison pipeline — is critiqued, highlighting the disproportionate impact on students of color.

But the book does more than chronicle a litany of punitive policing and surveillance methods. It also posits ways to make our communities safer, reduce excessive policing of low-income communities and rethink ways to make human beings more accountable to one another. In a chapter entitled “Beyond Alternatives,” Schenwar and Law provide a resonant look at restorative justice programs that do not remove offenders from their neighborhoods, but rather offer concrete help alongside voluntary, long-term counseling for both victims and offenders. While this section of the text could be expanded to provide more detail about the nuts, bolts and glue of restorative justice practices, perhaps that’s fodder for another book.

Prison By Any Other Name is a grim but important read. A jolting assessment of contemporary criminal justice efforts, it’s a wise, scary and powerful indictment of the pro-punishment mentality at the heart of the U.S. criminal justice system. Clearly-written and persuasive, Prison By Any Other Name is a thoughtful call for compassion and kindness in our efforts to promote safety, security and community peace.

Prison By Any Other Name: The Harmful Consequences of Popular Reforms
By Maya Schenwar and Victoria Law, foreword by Michelle Alexander
The New Press, July 21, 2020 (available for pre-order)