Frances Goldin, a legendary Lower East Side activist, trailblazing leftist literary agent and good friend to The Indypendent died at home on May 16 following years of gradually declining health. She was 95.

Born June 22, 1924 to Michael Axler, a mechanic and toolmaker for the MTA, and Sophie (Saslowsky) Axler, a homemaker and former seamstress who had been fired for union activities, Goldin grew up in Springfield Gardens, Queens. During her childhood, she encountered the sting of both antisemitism and the class prejudice of her more well-to-do neighbors.

She was valedictorian at Andrew Jackson High School. However, her family expected her to become a conventional Jewish wife and mother and insisted she learn secretarial skills instead of going to college. In 1944, she met her husband Morris Goldin at the War Shipping Administration where they both worked. She moved with him to the Lower East Side. He was the head of the New York State branch of the American Labor Party and a communist. She soon became one too. Six years later Goldin ran for state Senate on an American Labor Party ticket headed by W.E.B. DuBois.

When I interviewed her at her East 11th Street apartment in 2014, she described arriving in her part of the Lower East Side (now known as the East Village) as “nirvana.” It was her first taste of freedom, savored amid a multi-racial, working-class neighborhood with a rebellious history. She never left.

She also fought like hell to defend her community. In 1959, Robert Moses sought to demolish much of the Lower East Side east of Bowery from East 9th Street to Delancey Street. He wanted to replace the neighborhood’s tenement buildings with middle-class housing. Frances sprang into action and became a founder of the Cooper Square Committee, which led the fight against Moses’ urban renewal juggernaut. Another co-founder was Walter Thabit, a pioneer in community-based urban planning who would become her longtime partner after she separated from her husband. She also helped found the Metropolitan Council on Housing, which today is the oldest and largest tenants rights group in the city. 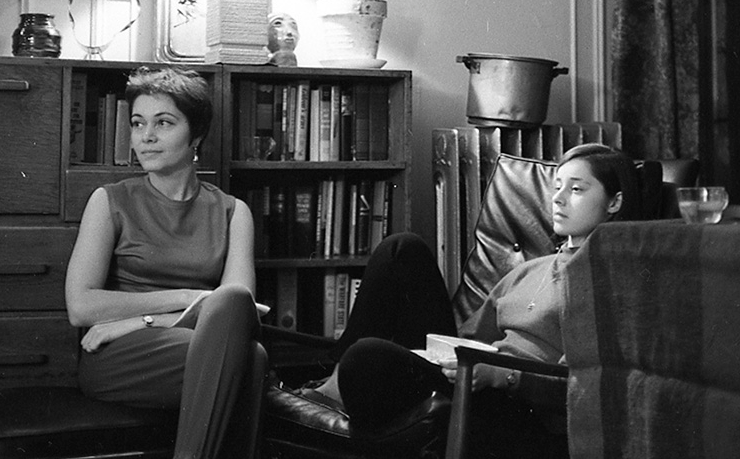 Goldin (left) back in the day. Photo: Courtesy of the Cooper Square Committee.

Goldin had left the Communist Party by then but would later credit her experience in the CP for making her such an effective organizer. If she was a dreamer, she also understood the surest way to move people to action was to address their basic needs, such as keeping a roof over one’s head.

“I learned the basics of organizing,” she said in a 2014 interview with the Greenwich Village Historical Preservation Society. “If you don’t have the troops that are involved in the struggle, you have nothing.”

Frances Goldin was relentless, her enthusiasm infectious. And her life shows the value of being a long-distance runner. The Cooper Square Committee not only stymied Moses’ plan but in the following decades built or preserved more than 850 units of affordable housing and preserved the East 4th Street cultural district between Bowery and 2nd Avenue, a center of off-off Broadway theater.

Goldin was also a leader in thwarting another Moses monstrosity — the Lower Manhattan Expressway, or LOMEX, a 10-lane elevated expressway that would have plowed through SoHo, Little Italy and the Lower East Side. It was approved by the city in 1960 but canceled in 1971, following a decade of fierce community opposition. 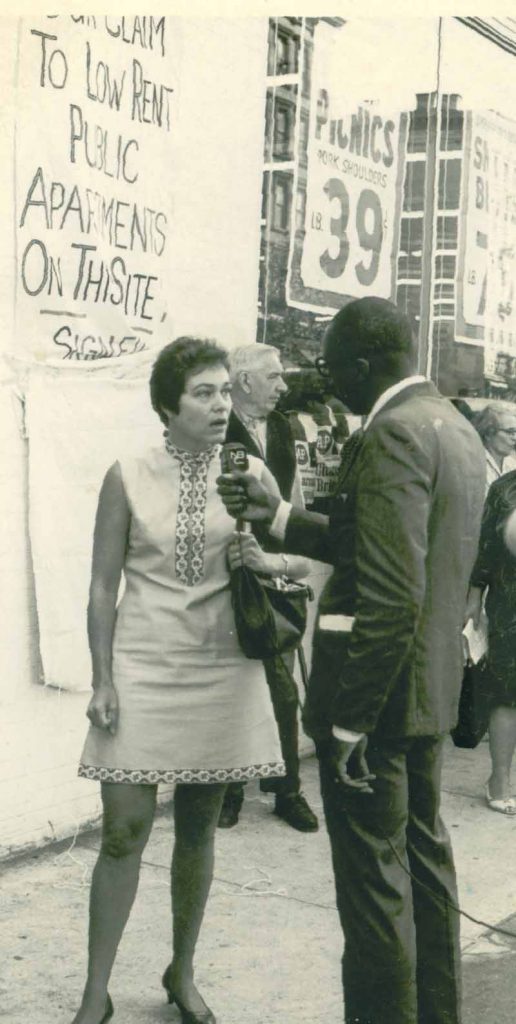 In 1967, Moses did succeed in leveling a 20-acre swath of tenement buildings just south of Delancey Street near the Williamsburg Bridge. Eighteen hundred low-income families, mostly Puerto Rican, were displaced. The Seward Park Urban Renewal Area (SPURA) remained empty for decades, a collection of desolate parking lots. Assembly Speaker Sheldon Silver and his base of assimilated, middle-class Jewish supporters in the Grand Street co-ops didn’t want low-income housing that would bring in Hispanic and Asian residents who would alter the area’s political balance of power.

In 2011, a compromise was reached to build a mix of affordable and market-rate housing on the site, now known as Essex Crossing. The deal called for 50 percent of the units to be permanently affordable, far more than what normally accompanies affordable housing agreements negotiated between the city and developers, though some neighborhood residents remain concerned that the project will accelerate gentrification.

On Jan. 29, 2018, the Frances Goldin Senior Apartments became the first of 10 buildings to open at Essex Crossing. Located at 175 Delancey Street, it has 99 apartments for low-income seniors, a fourth-floor senior center, a medical center run by NYU Langone, job training services for young adults and a cafe operated by Grand Street Settlement. Goldin, now 93, was joined by friends, neighbors and city officials at the opening ceremony. Silver, meanwhile, was awaiting retrial on federal corruption charges.

“We succeeded and he failed, and that’s good,” she told NY1.

I first met Frances in 2009 when I was invited to her 85th birthday party by a mutual friend. A festive crowd of a couple hundred friends and fellow activists turned out to celebrate her life. She reveled in the moment. The event was held at the recently opened Chinatown YMCA on the corner of Bowery and East Houston. This community space was another byproduct of a multi-decade battle between the feisty activists of the Cooper Square Committee and the city — in this case over a parcel of land on the southside of Houston between Chrystie Street and Bowery.

Amid her tireless organizing for affordable housing, Frances founded the Frances Goldin Literary Agency. The former secretary was now her own boss. When she hung her shingle in trade publications, it came with a promise: “I do not market any material that is sexist, racist, homophobic or gratuitously violent.”

In February 2013, Frances called The Indy to thank us for running an interview with the director of a documentary about Mumia. She said she had read the paper every month for years and mentioned she was working on a new book project. It would explore what a socialist United States might look like. This time she was not only the book’s agent but it’s co-editor along with two close friends of hers, Debby Smith and Michael Steven Smith.

Frances had been a regular presence at Zuccotti Park a couple of years earlier — an old lady in purple garb (worn to honor her two lesbian daughters), a purple streak in her otherwise silver hair, holding aloft a sign that read “I’m 87 And Mad As Hell.” In one memorable scene she pleaded to no avail with the police to arrest her along with the young people who were being hauled away.

She found Occupy Wall Street and its revival of class politics in American life to be deeply inspiring. In Occupy’s aftermath, a Pew poll found that people aged 18 to 29 favored socialism over capitalism even though few could say exactly what they meant by the former. Frances wanted to fill in the gaps. 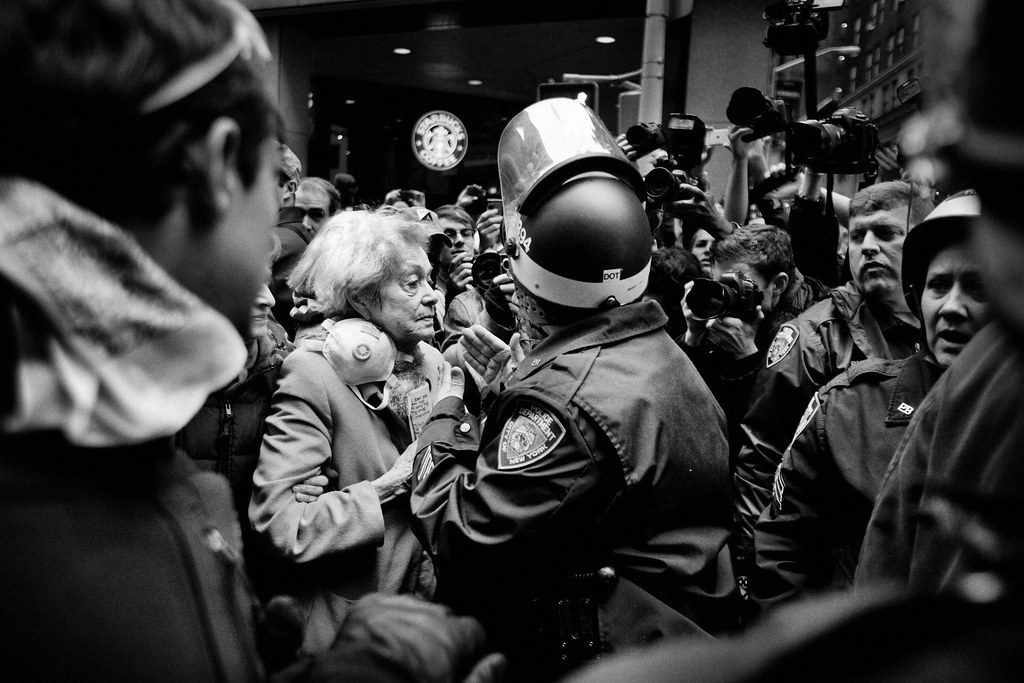 Frances trying to convince the cops to arrest her at Occupy Wall Street. They wouldn’t. Photo: Brendon Stuart.

From the moment I spoke with her on the phone, I felt The Indy should take the lead in promoting the book in New York City. She agreed and convinced Harper Collins, her publisher, to get out the checkbook.

The Indy produced a four-page wrap-around special section when the book came out in January 2014. It included an interview with Frances, a retrospective on famous Americans who were socialists and a cover photo of a young woman blowing a kiss to a crowd of protesters from atop a friend’s shoulders. Socialism, it said, does not have to be a long, unhappy slog to the gulag.

The book launch at the Housing Works bookstore in Soho was packed to the rafters with 250 people present. Imagine: Living in a Socialist USA was ahead of its time and did not become a bestseller, but it was a harbinger of the socialist revival that arrived with Bernie Sanders’ 2016 presidential run.

Frances, Michael and Debby understood there is no conceivable path to winning a socialist society without a robust left media. After the book launch, they hosted a house party for The Indy, encouraging their friends to turn out.

“I feel like I haven’t had a paper since the old (U.S.) Guardian died,” she told the assembled crowd, referring to the New York City-based left weekly that folded in 1992 after a 44-year run. “But now I do. It’s The Indypendent!”

Our paper had been barely scraping by and needed a boost. The windfall from that night helped stabilize it financially and put us on a course that would ultimately see The Indy’s circulation triple over the next few years.

Frances continued to read the paper every month for as long as she was able to do so. We were fortunate to have such a good friend who didn’t just talk about solidarity but practiced it always and everywhere. Her legacy will endure in the books she shepherded into existence and in the victories she won for her community. It will live on in all who knew and loved her, who were moved by her zest for life and for struggle.

For leftists, Frances demonstrated you can be serious about your work, committed in your principles, but also live joyously and, with enough perseverance, win victories that others thought impossible.

May her dream of a socialist USA — humane, inclusive and deeply democratic — also be won someday.

John Tarleton is the editor-in-chief of The Indypendent.

A WOMAN FOR ALL SEASONS 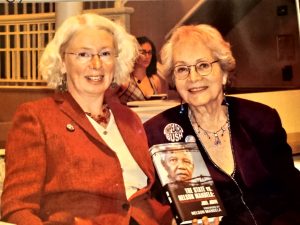 I went to buy granola at the Fourth Street Food Co-op in 1987 and saw signs on the block saying “Speculators out of Cooper Square.” Long before I ever met her, l had awe for Frances Goldin as one of the founders of the co-op.

Years later, when I wanted to find a publisher for a South African lawyer who had defended Nelson Mandela in the Rivonia Trial, I turned to her because of her reputation as a literary agent. When I proposed lunch, instead of going out, she invited me to her office and gave me a sandwich. She didn’t like people making a fuss for her or about her.

The original account of the trial published in South Africa was out of print. Frances quickly found a new publisher and the book was re-released with a new title, The State vs. Nelson Mandela:The Trial That Changed South Africa — a striking new cover image and a forward from Mandela himself. She knew how to get things done! — Ann Schneider. 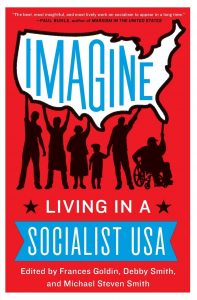 I knew Frances Goldin from the Lower East Side housing-activist world, but I worked with her most closely when I edited the manuscript of Imagine: Living in a Socialist USA, the 2014 anthology she put together with Michael and Debby Smith.Frances was committed to two things for the book: First, she instructed me, it should be readable, accessible to high-school students, working-class people and “Daily News readers.” In other words, no left-academic jargon like “Under the hegemony of neoliberalism there is a privileging of superexploitation in the periphery.”Second, that the writers should not just rant about the evils of capitalism or promise that manna pie would fall from the socialist sky, but talk about how their ideas and principles would work in reality, and what issues and conflicts they would face.She was also principled in a way that is unfortunately not that common among often cash-strapped activist groups: She ensured that I got paid a living wage for my work.And as a recent grandfather, I appreciate that she was the literary agent who got Goodnight Moon published. I’ll remember her when I read to my granddaughter, “Goodnight noises everywhere.” — Steven Wishnia.