The Correctional Health Services staff member intended to arrive early for work at the Eric M. Taylor Center, one of nine facilities on Rikers Island. The EMTC was closed in early 2019 as part of the city’s ten-year plan to shut down Rikers and replace it with four smaller, community-based jails, one in each borough, but it had just been reopened to deal with the COVID-19 pandemic.

Rikers is a repository of attitudes about incarceration, society, and what social distancing means beyond the COVID-19 crisis.

The EMTC, where inmates who have tested positive for the virus are brought from other facilities on the island, is now commonly called “the Corona jail.”

The healthcare worker’s commute on that morning in early April, as usual, was by subway to the Q100 bus that services the narrow bridge to the island. But with the increased scrutiny — including an infrared temperature check — at the security checkpoints to enter Rikers and again at individual facilities once on the island, he punched in late, at a little past 8 a.m.

There was new PPE, he was glad to see, an indication that some of the tensions with supply and allocation were being alleviated. The shift began normally. He joined a team, which includes a physician and either a nurse or physician’s assistant as well as a corrections officer, to make the daily rounds of patients in the secure ward.

But as he neared the end of his shift, he began to feel overheated. His face mask felt as if it was suffocating him. Lightheadedness and the fear that he might pass out soon followed. After asking his coworker to complete the medical checks, he headed to the locked exit. Signaling to the corrections officer on duty to open the door, he had to sit down. At this point, even the men quarantined in the dorm could see that something was wrong.

“Get him out of here,” they began to call, not out of fear but concern for his wellbeing.

Still, he continued to rationalize that he was just tired, overworked and stressed out, feelings common among both CHS and Department of Corrections staff. A colleague had him lie down and checked his vital signs, worried at first that it might be a heart attack. It was when he began to type up his notes from the day’s rounds later that he came close to fainting and was told by a supervisor that he had to go home.

He tested positive for the coronavirus and was put on official COVID leave, under strict quarantine, but without hospitalization.

“I coughed for ten days,” he recalls, speaking on condition of anonymity.

Once cleared to return to work, it was a question of deciding who to “come out” to about his virus experience, a decision that reflects the nature and place of Rikers Island itself.

For most New Yorkers, Rikers — lying in the East River, so close to and so far from Manhattan and Queens — is a place known only through images, in our imagination or nightmares. “We” are not “them,” among the incarcerated.

In the current pandemic, these perceptions take on added weight: social differences between the haves and have-nots shape the perception of those who have had the virus or are at increased risk of getting it, versus those who have not.

One of the world’s largest jail complexes, and for most of the city’s population both out of sight and out of mind, Rikers is a repository of attitudes about incarceration, society, and what social distancing means beyond the COVID-19 crisis.

A 2017 report from the Independent Commission on New York City Criminal Justice and Incarceration Reform unequivocally recommended closing Rikers as part of an overhaul of the city jail system. 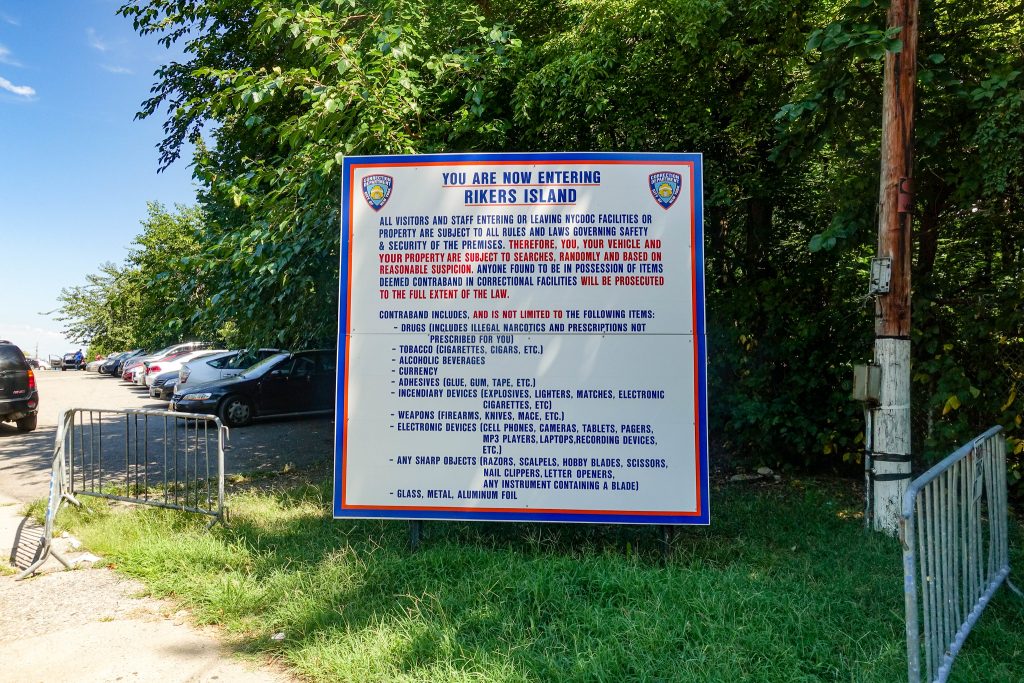 In his foreword to the report, the commission’s chairman, Joseph Lipmann, a former Chief Judge for the New York State Court of Appeals, writes: “Rikers Island is not just physically remote — it is psychologically isolated from the rest of New York City. Rikers severs connections with families and communities, with harmful consequences for anyone who spends even a few days on the island.”

The report recommends that it be replaced by the smaller, borough-based jail system and calls for the city to reduce its incarcerated population while improving conditions for everyone concerned — guards and service providers, as well as the incarcerated, their families, and their communities. The city’s attempts to follow through with the report’s recommendations have since been met with both praise and skepticism by criminal justice reformers, but the spread of COVID-19 has forced it to empty out its jails at a far quicker pace than initially planned.

The prime imperative, the health worker said in a previous interview with The Indypendent, especially considering the preexisting, inhumane conditions on the island, was to get the currently incarcerated out and not to bring anyone else in. A reduction in the prison population to levels not seen since World War II and CHS’s quarantine efforts appear to have greatly reduced the spread of the disease.

A “crisis was averted,” the health worker says. “These measures prevented the worst from happening.” When he returned to work, he adds, “I was relieved that the changes had happened, had saved lives.”

Despite CHS’s early and, in his view, effective measures to restrict and control the transmission of the virus, there was initial tension and confusion as it arrived at Rikers.

The first COVID-19 diagnosis, of a corrections staff member, came on March 15; the first diagnosis among the incarcerated population came three days later. PPE supplies were haphazardly and unequally distributed at first, exacerbating pre-existing tensions between CHS and DOC staff, who tended to view healthcare workers as “guests in our house.”

While these tensions dissipated as guidelines were put into place, clear communications and procedures established and PPE supplies normalized, they were still palpable by early April. By then, quarantine wards were set up within individual jails for those exposed to the virus. Once diagnosed, prisoners were moved quickly to the EMTC or the Communicable Disease Unit or, if their condition warranted, sent off-island to secure DOC wards at Belleview or Elmhurst hospitals.

This system remains in place.

During rounds, CHS staff check not only a prisoner’s temperature, which alone can be a misleading indicator, but oxygen levels and pulse. Careful records track the movement of people into and within the jail complex and the care requested by or provided for each individual.

The health worker says he makes a conscious effort to be direct and respectful with his patients, something that’s important to a population accustomed to being treated as less than human. At the same time, the health worker is suspicious of the “narrative of heroes,” even as he describes the almost superhuman efforts of CHS staff to prevent the spread of COVID.

A striking contrast to Rikers’ relative success is revealed in a facility evaluation report on the federally-run Metropolitan Detention Center in Brooklyn, which made headlines in February of last year for its freezing cold cells.

The report from Community Oriented Correctional Health Services was filed at the end of April by Dr. Homer Venters, Rikers’ former Chief Medical Officer. Dr. Venters visited MDC on April 23 and what he found there, in his tour of the facility and interviews with staff and incarcerated, shocked him.

“I was alarmed,” he writes, “by the facility’s failure to implement simple procedures, in line with [CDC] guidelines, that could identify patients ill with COVID-19, prevent the spread of COVID-19 throughout the facility, and ensure that high-risk patients receive adequate care.”

“In fact,” he continues:

It is my assessment that several current practices in MDC actually promote a more rapid spread of COVID-19 inside the facility and serve to work against some of the infection control measures already in place. Detainees do not have access to adequate cleaning solutions or personal protective equipment (“PPE”); members of staff were not always wearing gloves or masks; and the COVID-19 isolation unit that I observed contained (i) detainees confirmed to have or suspected of having the virus and (ii) detainees who did not or were not suspected of having COVID-19.

“The MDC’s failures,” Venters concluded in his report’s executive summary, “represent gross deviation from adherence to correctional standards of care and CDC guidance.”

The contrast between the response at Rikers and that at the federal jail points to deep inconsistencies in the treatment of incarcerated persons at local, state, and federal levels. The challenge facing prison and health officials is to coordinate levels within and between correctional institutions, recognizing that these are not closed systems.

The Rikers health worker who spoke with The Indy warns the COVID crisis could exacerbate concerns about “public safety,” reversing the pattern of decarceration that preceded the crisis but that’s become a political flashpoint as a result of it.

The “new norm,” he fears, is that more power will be directed to the DOC, potentially limiting or bypassing established guidelines and best practices for the health and safety of prisoners and staff alike, and for the families and communities to which they are connected.

Yet he says his own recovery and return to work have given him a kind of “immunity” — not to the virus itself but to the fear he often felt at Rikers even before the pandemic began.

“It made me recommit to working there,” he says.

Still, he doesn’t “come out” about his illness with corrections officers or DOC staff, although the shared risks have lessened previous divisions among Rikers workers. With his colleagues at CHS, it depends on the circumstances. When he lets his patients know he’s had COVID, it’s about building trust, he says, overcoming “two solitudes, inhabiting one space.”