The Indypendent
Menu
A Free Paper for Free People
Congresswoman Alexandria Ocasio-Cortez briefly removes her mask to blow bubbles for a child in Queens on her campaign trail before her June 2020 primary.Photo: Sue Brisk.

Alexandria Ocasio-Cortez took a mellow journey across New York’s 14th congressional district late Tuesday afternoon as she waited for the votes to pour in confirming her victory in the Democratic primary.

From Astoria to Corona to Parkchester to Allerton she was greeted warmly by a steady trickle of constituents in Queens and the Bronx as they entered polling places, and at subway stops as trains rumbled to a halt and disgorged her heavily-immigrant and working-class constituents.

“I’ve never seen a candidate’s supporters out here on election day, much less the candidate herself,” said James, an Allerton resident, as he gestured at Ocasio-Cortez and a table full of campaign literature staffed by volunteers.

If 2018’s election concluded with a final sprint toward a shocking victory, this was more like a stroll down victory lane.

“I’m just trying to get re-elected today,” she said with a laugh from behind a black face mask when a reporter asked her about her much-anticipated plans for 2022 and beyond.

I covered AOC’s 2018 run against Joe Crowley. Like so many, I was astounded to watch her become a leading national figure overnight in a way that no rookie congressperson has ever done before. Two years later, I was curious to see her on the campaign trail again.

Waiting patiently for moments when there were no voters around, I ducked in and asked her a few questions at a time. We talked policy and what she’s learned about herself and about politics and power during her singular journey over these past two years.

This interview has been lightly edited for concision. 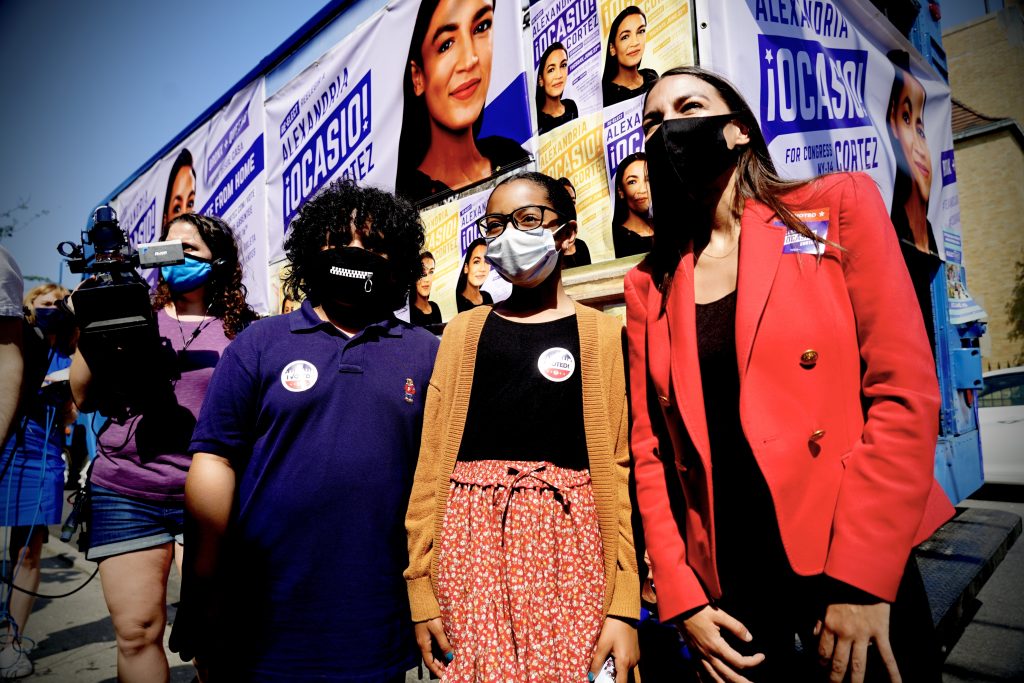 AOC with her constituents on Tuesday. Photo: Sue Brisk.

If you’re re-elected and the Democrats take the White House, what are your goals for the next two years?

Especially if we win back the Senate, I think my goal would be to try to make sure that we push and influence Democratic policy to be as progressive as possible, particularly on issues like climate change, wages and healthcare. 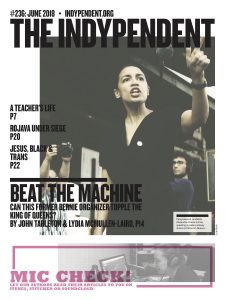 EXPLORE MORE OF OUR AOC COVERAGE.

You’re reapplying for your job today. Looking back on your first two years in office, what would you say you have learned about politics and being in Congress that you didn’t know going in?

I’ve always been a believer in inside-outside change — the outside coming from the streets and from protesting and from community organizing and activism. I knew a lot about the outside before. My first term has really been about learning to navigate the inside. I’m getting an understanding of structures, the way power is organized and how the inside and the outside interact. It has been a huge learning point for my first term.

Well, what have you learned, being in the same room with Nancy Pelosi and the House leadership and with all the Republicans that want to come after you?

I’ve learned a lot about how institutional power is organized. It’s very interesting because, on the one hand, it feels so entrenched and established and powerful. But on the other, there’s an aspect to it that feels very fragile because it’s extremely susceptible to the moment and to public opinion and a responsiveness to events. And so there’s a strange duality to it because there are moments where it feels insurmountable and there are moments when it just feels very, very possible to enact change.

What do you want your supporters to understand about the political process and the way that power works, so they can more accurately assess how you are performing your job?

For our movements and our goals, it’s not just about what progressive members we have. It’s about the balance of power of the entire Congress. And so it takes a combination of a lot of different factors. First of all, making sure we have a majority, whether it’s the House or the Senate. Second of all, making sure that people who claim to be progressive are actually doing a progressive job on the inside. That includes both supporting people who are trying to win over swing seats while also sometimes being open to supporting primary challengers in deep blue seats to keep our elected officials honest.

Bernie Sanders is someone you have identified as being a mentor and an inspiration to you. A long-range question because a lot of people ask about what you will do in 2024 and 2028. But you will be Bernie’s current age in 2067. From that viewpoint, what do you hope to have accomplished in your life?

I would hope by 2067 every single American would be guaranteed healthcare in the United States and that it’s free at the point of purchase. I would hope by 2067 we would have taken dramatic action to respond to climate change to make sure that we indeed have maintained a liveable planet for ourselves and our children. I would hope by 2067 that we have dignified work and labor and life for every person in the United States and that we have broken and busted up the intense concentration of wealth, which is oligarchical and in many ways authoritarian and dictatorial.

That’s on my wish list. I know I alone cannot accomplish those things but I do know we as a movement can.

When you wake up in the morning, how do you think about representing the 700,000 people of your district in Congress?

It’s such a diverse district where there are so many different kinds of communities I represent. A lot of it is just waking up and figuring out which issues are impacting certain parts of our district and really making sure we take that back to Washington. Whether it’s the upcoming eviction wave we are facing and how we’re going to deal with that with housing assistance on the federal level — how do we make sure we suspend evictions? how do we make sure housing is treated as a human right in the structure of our legislation and our law — or whether it’s a living wage or guaranteeing healthcare as a right, it’s not just what we’re fighting for but how we’re fighting for it.

The slogan “Black Lives Matter” — how will you try to manifest that?

It’s in every single policy. Of course, this is an issue of policing. But structural racism is not limited to policing. This is about housing inequity. It’s about healthcare inequities. It’s about environmental racism and anti-black racism in particular in addition to the dark legacy of slavery. It evolved into redlining. It evolved into wealth gaps. When we talk about the Movement for Black Lives, it’s about making sure our police departments are reined in but it’s also about making sure we are addressing racial inequities across policy lines.

The kind of leadership that you and other members of the Squad have tried to model, can you talk about that?

We just try to be ourselves (laughs). But us being ourselves is somehow radical in Washington, D.C.

Ilhan Omar is the first hijabi refugee in Congress. Rashida Tlaib is the first Palestinian woman in Congress. Ayana Pressley is the first woman to represent the Massachusetts delegation in United States history. We all got there by the courage of our convictions, by not accepting corporate PAC money, by fighting for progressive policies. All of that is a huge part of trying to push the envelope. But we don’t go out to push just to push. We go out because we think it’s the right thing to do.

For other people who might think of running for Congress or another political office, what would you have to say to them after everything you’ve been through? Is it worth it?

I think it all depends on what makes it worth it to you. It’s not just about running for running’s sake. It’s about do you feel called to this? If you do feel called to it, what’s your why? Your why is what’s going to help you persist through all the sexism, all of the racism, all of the classism that a lot of us tend to experience running on top of the already difficult structure of politics. I would say, “Know your why and stay connected to your why.”