Editor’s Note: This is the second in a series of interviews with progressive anti-establishment candidates running in New York’s June 23 Democratic primaries. 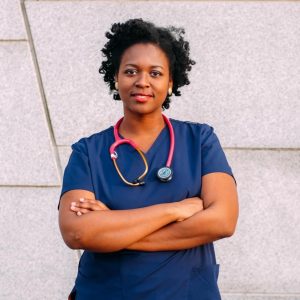 Nurses have been on the frontlines of the COVID-19 pandemic. But what would it be like to have one on the frontlines of state government? New Yorkers could soon find out if Phara Souffrant Forrest wins a hotly contested Democratic primary for Assembly District 57 in Brooklyn where she is challenging incumbent Walter Mosley. She is running as part of a working-class slate of candidates organized by the New York City chapter of the Democratic Socialists of America. The election is on June 23, though early voting is already underway.

This interview has been edited for length and concision.

Can you tell us more about your background as well as how you became politicized and came to hold the values you do?

I am 31-years-old. I was born here in Crown Heights, and I still live in the same apartment that I grew up in. My mom is a home health aide. My dad is a retired baker and my step-dad is a taxi driver. My dad was a socialist from day one though he wouldn’t use that term. He would take me to protests at City Hall and would tell me about the history of the U.S. occupation of Haiti and not to trust “the system.”

I graduated from college with a degree in international relations and political science. I became inspired to become a nurse in 2012 while working with an NGO in Haiti as a community liaison and translator. It changed my thinking on what community health means.

I worked with the doctors, the nurses, the health alliance members and even the local priest and the houngan, or “witch doctor,” to make sure everybody was on top of it. We had the same thing we were saying but so many messages around it. It was like, “Okay. Wow. This is how you delegate. This is how you deliver community health.” So when I came back stateside, I worked in education, but I knew that I wanted to be a nurse after that.

What would it mean to have a nurse in the state legislature?

Nurses are trained public advocates and nurses are experienced in community care. During our current crisis, a nurse would be an essential member of the Assembly to get us through this crisis because we are trained to assess, plan, intervene, and evaluate. That is for our patients, for the family, for the community. We’re trained to do all of these things at any level.

The main concern is housing. I support legislation canceling the rent for those affected by COVID-19. I also support the Just Cause Eviction bill, which limits the landlord’s ability to kick tenants out of their homes.

As far as health care, people are very outraged — not only at the fact that they’re put in this situation where they have to work as essential workers and get sick from the coronavirus, but also they’re getting slapped with ridiculous bills. My husband got a bill from the hospital after going there for corona-like symptoms. If I was in office, I would support the New York Health Act, which would be single-payer insurance that would provide free healthcare at the point of service for all New Yorkers. That money would come straight from the rich people because that’s who we need to tax.

What would you do as a state assemblymember to address the crisis in policing that has become so apparent since the killing of George Floyd?

The bare minimum is passing the Safer New York Act backed by Communities United for Police Reform. A few of these bills have been passed, including the repeal of rule 50-A, but we need to pass the whole package. The next step is reexamining state funding for police departments across New York. That includes reducing the NYPD budget — $5.6 billion a year — and reinvesting in social welfare like health care and education, which is being cut. We can keep our city safe and healthy without resorting to the constant use of force.

How do the people you talk to feel about the political process?

My constituents have a real lack of faith in politics because they feel like it’s corrupt. They don’t understand why, in this time, the governor is passing a budget to cut public services. They’re confused about the proposal for Bill Gates taking over public education. It just doesn’t make any sense. So people are confused about what politicians are really about, which is why I’m not taking corporate dollars or real estate money because I want to be transparent and be of service to people, not to corporations.

Yes. Ordinary people! Not one red cent from nobody else.

For many people who might think about running for office, the thought of asking people for money is intimidating. How do you think about it in a way that works for you?

Before I talk to people on the phone, I put myself in a space where I think of myself as an organizer. I am organizing for this campaign. I am organizing for our issues. So it’s not like you’re giving me money. You’re investing in a campaign that will fight for housing, healthcare, green new jobs. So whenever I get on the phone, I feel very comfortable talking to people about supporting the issues that they’re most impacted by. I think that’s why so many people donated. They feel like the campaign is the solution to the issues.

How has your campaign been altered by the pandemic? One of DSA’s strong points is its ability to do door-to-door canvassing, and that came to a halt.

Canvassing is not just knocking on doors, it’s voter contact.  So we just shifted to voter contact via phone banking, mailing postcards, anyway that we can let voters know that there is a campaign designed for them in mind. That’s how we were able to shift. I have to say that it’s been very positive. I can’t divulge how many positive IDs we’ve made, but if we turn them out, we will win.

If you win your race and go to Albany and Marcela Mitaynes and Zohran Mamdani also win, there would be three of you in a State Assembly that has 150 members. How would you make that work?

Last year I went up to Albany and rallied and got arrested with a group of people calling for rent law reforms. All I saw was one assemblywoman standing with us championing our cause. Now imagine three democratic socialists in the Assembly, and then two in the State Senate. Imagine the amount of power we can generate on behalf of our coalition. Imagine the support we can generate for the Green New Deal, housing and healthcare.

You recently tweeted that capitalism is a death cult. What did you mean by that?

Capitalism is designed to use and abuse because everything is taken away. It creates a culture of greed and death. Everything is a commodity. You are not an important piece in capitalism. Money is. And that will be the death of us.

Let’s say you and the other members of your slate win these elections and more democratic socialists continue to be elected in future cycles. If you want to dream big for a moment, what’s your vision of what New York could be in say 10 years if this upsurge continues.

The aim of democratic socialists is to uplift working people. The vision is for everyone to have health care, for housing be a human right and have that written into our state constitution. Education would also be a human right. These things ought to be given and everyone has  responsibility to ensure that these rights are protected. I have a vision for people to really live balanced lives where they feel comfortable at work and in the home as well.