The Indypendent
Menu
A Free Paper for Free People
Bowman, center, talks with voters in the Bronx.Photo: Sue Brisk.

The educator of 20 years has a 10-point advantage in the latest Data for Progress poll. Taken between June 11 and June 15, it also shows that 27 percent of voters are still unsure about whether they will cast their ballot for the 31-year incumbent or his new challenger in Tuesday’s primary.

‘For Eliot Engel, black lives are disposable. We’re just voters to him.’

“When you have somebody who served for over three decades, you have to ask yourself, whether those three decades have brought about a change that’s made your life better,” Bronx state Sen. Gustavo Rivera said at a campaign stop. “You see someone who has just in the last decade or so, as a principal, as an educator, actually made a direct impact on the lives of thousands of kids. He wants to bring that same level of energy and commitment to this entire district.”

In addition to Sen. Rivera, Tiffany Cabán and Cynthia Nixon hit the pavement handing out fliers and encouraging the public to vote for Bowman, founding principal of Cornerstone Academy for Social Action Middle School, who has also been endorsed by Bernie Sanders, Elizabeth Warren and Alexandria Ocasio-Cortez. From the Bronx to Westchester, residents of the 16th district told The Indypendent they want a representative that will represent the people.

“The district is pretty segregated by both class and race,” said Pelham resident, Caitlin Wong. “We need help. We need a representative who will fight for all parts of the district, and not just take money from these big PACs and not actually care about the people here.”

Young voters demanded a change to the unequal education system of their district. They believe that Bowman is well equipped to bring about the changes due to his firsthand experience as a teacher, guidance counselor, dean and principal.

Co-op City residents said that Eliot was absent in the racially-diverse community of 44,000 people before his visit earlier this month and many questioned his commitment to the community due to his residence in Maryland. At a recent campaign event, he was heard on a hot mic saying that if it wasn’t for the primary, he “wouldn’t care” about speaking against police brutality.

Balagun added that Engel’s alleged support for the Black Lives Matter movement was contradictory, given his unconditional support for Israel, despite its human rights abuses against Palestinians. The congressman chairs the House Foreign Affairs Committee and supported President Donald Trump’s inflammatory recognition of Jerusalem as the capital of Israel, a city Palestinians have long sought to make the center of a future state.

Bowman will continue to campaign in the Bronx on Monday afternoon even as the district is saturated with ads backing Engel financed by Republican super PAC money. The winner of Tuesday’s primary is expected to go on to win in the November general election in what is a heavily Democratic district.

“We’ve been talking to people and building relationships all throughout the district from the very beginning,” Bowman said. “These relationships have been authentic. They’ve been rooted in love. We care about all of the same policies that people across the district care about as well. There’s a connection and this is a time for change. People are really excited about that so we like our chances.”

JAMAAL BOWMAN SUPPORTERS IN THEIR OWN WORDS 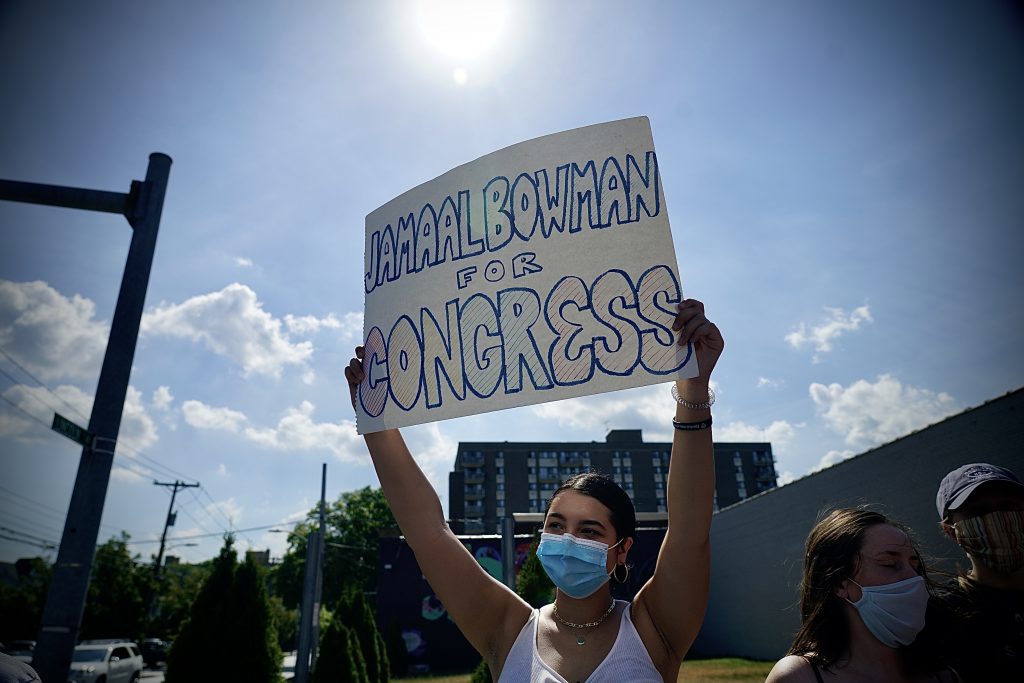 Claire Deane
We’re going through at least three pandemics: a global health crisis, systemic racism and unemployment. Jamaal’s fighting for all of the right reasons, for all of the people. And I’m very excited about it.
Caitlin Wong
I first got interested in Jamaal’s campaign, because he’s really big on education. I feel like that’s really fundamental to a lot of other things and improving different areas of the district. And also, I believe he’s really here for the people in the district and will fight for us.
Kazembe Balagun
It’s not just about Eliot Engel not being a good representative for us but the fact that this community’s been underserved for the past couple years by having a lack of a House Representation. His message resonated for me because I feel like it’s time for a change. I think it’s also time for us to have some new blood in there to be able to finally have a voice in Washington.”
Alex Bruns-Smith
I was just immediately drawn to his message. My dad was a public school teacher and Jamaal is just clearly so passionate when he talks about public education. He truly cares about what’s going on in his community. The current Congressmanis more worried about wars and incarceration than he is about the problems in his own community, and there are many problems in the community that need to be addressed.
Reyhan Sadir
Just seeing another progressive person who grew up in District 16, served as a special education teacher, served as a high school principal really speaks for the community as a whole. Seeing a grassroots campaign like what Bowman has started, kind of challenges the status quo and the natural way of doing things so it’s just so great to see something different for a change.
Isabel Hidalgo
I already voted for Jamaal. I think that it’s really important that we have representatives that are fighting for us and that are actually here and listening and trying to do their best to help us.
It’s readers like you who ensure we continue publishing in these challenging times. Make a recurring or one-time contribution today. Thank you!