New York City during the 1930s and 1940s saw a unique array of political alliances. Although FDR was a Democrat, he was not connected to the party’s two leading machines in the city, Tammany Hall in Manhattan and its counterpart in Brooklyn. Meanwhile, FDR’s close ally Fiorello La Guardia was a liberal Republican.

La Guardia (aka the “Little Flower”) was also closely linked to leftist Congressman Vito Marcantonio and the garment union-driven American Labor Party (ALP), which had strong ties to the Communist Party (CPUSA). Here’s a sampling of how these connections played out just after the war, with Woody Guthrie, then living on Mermaid Avenue in Coney Island, as our point of entry.  —Theodore Hamm

From Bernie’s Brooklyn: How Growing Up In The New Deal City Shaped Bernie Sanders’ Politics:

Like many of his artistic peers, Woody continued to play an active role in local political organizing after the war. In March 1946, the Bensonhurst chapter of the CPUSA-affiliated International Workers Order held a fundraiser for Russian relief efforts that featured Guthrie. Three months later, Brooklyn’s chapter of the American Labor Party held a two-day organizing event at the Biltmore Hall in Flatbush.

The bazaar featured folk dances and gift items for sale contributed by the ALP’s thirty political clubs in Brooklyn. Headlining the first night’s entertainment was Arthur Miller, who had gained notoriety as a result of his 1945 novel Focus, which dealt with wartime anti-Semitism (including that of the Flatbush-based Christian Front). On the second night, Guthrie performed along with a troupe of folk dancers.

Miller and Guthrie also soon shared a mutual friend in Vincent J. Longhi, better known as “Jimmy.” A labor attorney, Longhi introduced Miller to some of his longshoremen’s union clients on the Red Hook docks, which Miller later said provided the basis of his screenplay The Hook.

In the eyes of the local Democratic machine and its allies, Longhi and the ALP were insurgent reds encroaching on their turf.

In the fall of 1946, Woody helped his Merchant Marine comrade Jimmy campaign for Congress on the ALP line. The waterfront district spanned from Red Hook through Gowanus (and what’s currently considered the South Slope and Sunset Park) to Borough Park. Rather than endorse the Democratic incumbent, John J. Rooney, the ALP supported Longhi who — following the examples of La Guardia and Vito Marcantonio — ran as a Republican.

First elected to Congress in 1944 with ALP support, Rooney quickly became an outspoken anti-Communist, thus spurring the left’s interest in unseating him. Rooney was backed by the party machine but also had powerful friends in Washington.

In late October, the Brooklyn Eagle ran a two-part series detailing the extensive participation of Longhi (1916–2006) in Communist Party activities dating back to 1934. As the Eagle (a Democratic Party organ) explained at the outset of its lead Sunday story, a conspicuously named “Non-Partisan Veterans Committee” supporting Rooney had provided the research on his leftist opponent.

The group’s information, the story noted, came from “unidentified ‘official government files.’” Rooney was later known to have close ties to FBI Director J. Edgar Hoover and the depth of the research certainly suggested that it was the bureau’s handiwork.

In addition to a CPUSA nominating petition he had signed in 1942, the Eagle highlighted the various articles Longhi had written in L’Unita del Popolo, the New York City publication for Italian Communists. Pete Cacchione, Brooklyn’s Communist City Councilman (representing Boerum Hill), was the paper’s other “star writer,” the Eagle declared.

The smear campaign notwithstanding, Gov. Tom Dewey and his Republican Party — sensing the opportunity to steal a seat from the Democrats, who held all of Brooklyn’s congressional offices  — stood firmly behind Longhi. 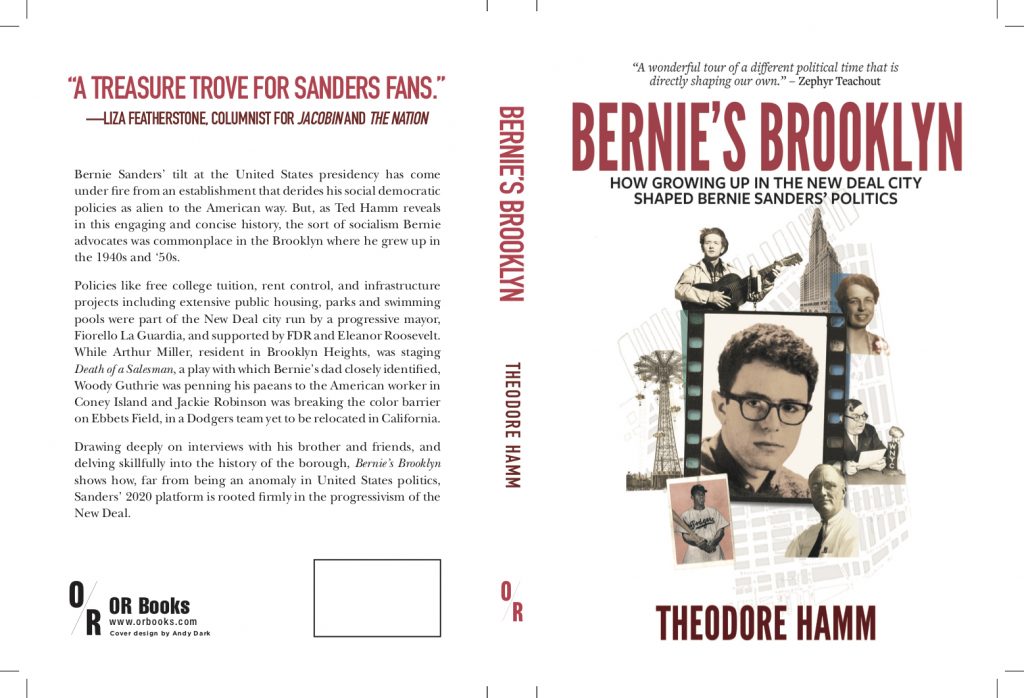 Longhi ran what the New York Times characterized at the time as a “spectacular campaign.” Guthrie and his longtime music partner Cisco Houston performed on a flatbed truck for longshoremen on the Red Hook docks.

But Guthrie wasn’t the only musical icon of the period who got behind Longhi’s bid. A loudspeaker on the flatbed delivered the following statement:

This is Frank Sinatra, speaking to you as a citizen. I envy the people of Brooklyn their chance to send Vincent J. Longhi to Congress. Jim Longhi is a man who [has] spent most of his life fighting bigotry and race hatred. That’s why if I were in Brooklyn now, I’d be campaigning for him. And there are other reasons to elect him, too. Jim doesn’t just talk about health clinics and playgrounds for children, and decent wages for all the people. These things are not just topics for campaign speeches for him. These are things closest to his heart. He has plans, real plans for bringing them about. That’s why I sincerely hope that the people of Red Hook, Borough Park, and the Gowanus District will send him to Congress, as I believe that Brooklyn and the rest of the country will be mighty proud of Vincent J. Longhi.

In plugging Longhi (the singer’s cousin), the then-leftist Sinatra sounded like he was talking about La Guardia. In his three terms (1934-1945), the Little Flower had proven that such a socially benevolent agenda could be enacted. But in the eyes of the local Democratic machine and its allies, Longhi and the ALP were insurgent reds encroaching on their turf.

Despite escalating Cold War hostilities, the candidate backed by Republicans and Communists nearly prevailed on the Brooklyn waterfront. Illustrating the rising tide of anti-Communism, both the labor-friendly PM and the then-liberal New York Post endorsed the machine Democrat rather than the left-wing challenger.

Longhi nonetheless lost to Rooney by only 5,500 votes. The challenger tallied 24,000 on the Republican line along with nearly 6,900 from ALP supporters. Just over 110,000 ALP votes were cast throughout Brooklyn (out of 272,000 citywide), and although Longhi’s bid failed, the ALP appeared to be a growing force in Brooklyn.

Two years later, Longhi again challenged Rooney, but this time only on the ALP line. Dewey was the Republican candidate for president that year against Cold Warrior Harry Truman, so backing a red radical like Longhi in his home state would not have been wise.

In 1950, however, Dewey and New York Republicans would again form an alliance with the ALP, the CPUSA and other radicals. Against opposition from the landlord-friendly Democratic Party machine, the right-left alliance spurred the passage of rent control (that twelve years later became the current rent-stabilization system).

The strange bedfellows of the early postwar period thus produced enduring results. As Bernie Sanders reminded the crowd at the Brooklyn College launch event for his 2020 campaign, “I was born and raised a few miles from here in a three-and-half-room rent-controlled apartment.”

It was rent control, Bernie said, that provided his family with the stability that allowed he and his older brother Larry to attend college. But in postwar New York City, the local Democrats were not the party of reform.