Hundreds of people marched to Queens Borough Hall to rally for policing reforms on Thursday. The “Let Us Breathe” march, led by lawmakers with the New York State Black, Puerto Rican, Hispanic and Asian Legislative Caucus met at 1 p.m. in Cunningham Park.

Protesters walked and biked down Union Turnpike while cars honked, business owners waved, and residents shouted from their front doors and windows, “Black lives matter!” People stood on the sidewalk handing out water bottles to the protesters who were set to walk for hours in 80-degree weather. Police officers walked and drove parallel to the protesters.

“Why are the cops here? I don’t see the violence here,” chanted a protester, who snuck out of her house to show support.

The march and press conference that followed was one of 10 held statewide protests held by the caucus Thursday. Lawmakers also rallied constituents in the Bronx, Brooklyn, Manhattan, Staten Island, Long Island, Buffalo, Albany, Syracuse and Rochester.

“I want to say to anyone that says ‘All lives matter,’ [that] there’s a reason why we say ‘Black lives matter,’” New York State Sen. John Liu told reporters and activists in Queens. “We say, ‘Black lives matter’ because it’s always a black life. So many people, millions of people, in these last couple of weeks have been chanting, ‘I can’t breathe.’ Well you know, unfortunately, it’s not a new phrase. It didn’t get invented last week.”

Nearly six years ago, Eric Garner, an unarmed black man, was choked to death by plain-clothes police on Staten Island. Garner’s last words,  “I can’t breathe,” were echoed by George Floyd in Minneapolis last week when a police officer, Derek Chauvin, knelt on his neck for eight minutes and 46 seconds.

The New York State Black, Puerto Rican, Hispanic and Asian Legislative Caucus proposes a police reform package that contains 12 demands. It includes the expansion of law enforcement body cameras and repealing the Law 50-a, which prevents the release of personnel records used to evaluate the performance of police officers, firefighters and correction officers. 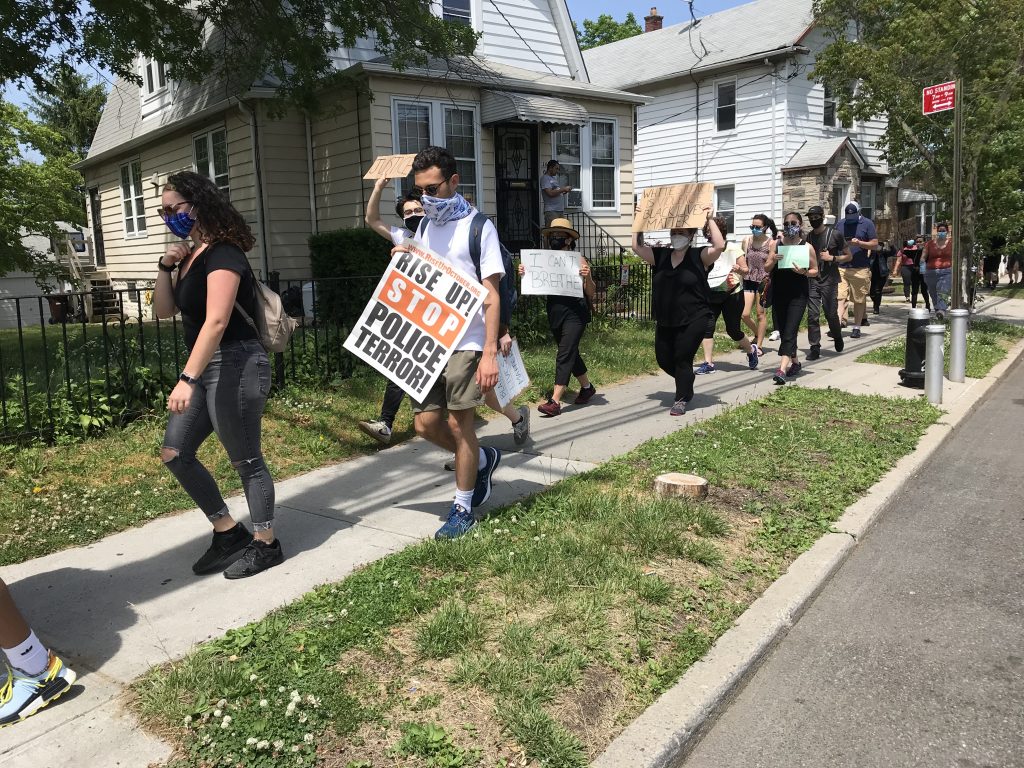 “50-a is just one of the police reform packages that we need to do to create more transparency and honesty,” said State Sen. Leroy Comrie. “Even when we had a peaceful rally yesterday in Hollis, there were some undercover officers that came out there, broke up and deliberately spat on kids. That has to stop[…] We need to shut that down now and we need to let police officers everywhere know that if they don’t stand up for the right thing, we’re going to take away every opportunity they have to hide behind any blue curtain.”

At the end of the event, protesters marched from the Queens Borough Hall to Sean Bell Way. Bell — black and unarmed — was killed in 2006 in a barrage of bullets fired by three undercover police the night before his wedding. The officers involved were indicted but not convicted.

Community leaders closed the evening with speeches and knelt for eight minutes and 46 seconds in silence for George Floyd.

“Protests are necessary,” said Assemblywoman Alicia Hyndman. “Civil unrest is necessary. There is no form of protest that white supremacy will approve of. March, take a knee, boycott and vote!”