The Indypendent
Menu
A Free Paper for Free People
The Gipper.Photo: National Archives and Records Administration.

“The nine most terrifying words in the English language are ‘I’m from the government and I’m here to help.’”

Ronald Reagan made this joke at a 1986 press conference and it has since become a cherished chestnut in conservative circles. It’s kind of sad for Republicans that they find this weak one-liner witty and it’s fully tragic for society that they genuinely think it’s a statement of profound wisdom.

When Reagan made his now-famous joke 34 years ago, it was in the context of announcing increased government assistance for farmers.

Today, we are in desperate need of the kind of help that only government can provide: unemployment relief, a national system of COVID testing and tracing, centralized public health information and laws that strip police of their limitless powers to brutalize protesters and people of color. Instead, we’re confronted with the truly terrifying sight of a government that is only here to harm by sowing distrust, spreading disinformation and stymying all attempts to implement measures to lower the COVID infection rate.

Four decades of free-market fundamentalism popularized by Reagan have had deadly impacts that were already accelerating. The years leading up to 2020 saw global temperatures steadily rising and U.S. life expectancy steadily falling. But now we are experiencing our greatest crisis under our smallest president.

The unstoppable force of coronavirus has met the immovable indifference of Donald Trump and in the ensuing chaos Republicans have given frank new expression to just how pathologically anti-human the Reaganite ideology truly is: The elderly should sacrifice their lives for the economy and freedom means the right to spread infection by not wearing a mask.

Hundreds of thousands are dead or dying and tens of millions face economic ruin but Trump and his party refuse to steer us out of the path of the storm because they truly believe that the bigger threat comes from increasing government regulations and social welfare programs.

History is a very dark comedy whose jokes unfold slowly and Trump’s spectacularly failed response to this pandemic is the actual punchline to Reagan’s attempt at making fun of big government. Too bad we all had to be there.

Speaking of history, when Reagan made his now-famous joke 34 years ago about the terror of government assistance it was in the context of an announcement of increased government assistance for farmers suffering from drought and rising debts. The joke was part of Reagan’s explanation that this new round of subsidies was a transition measure on the path toward the “ultimate goal” of “economic independence in agriculture.”

Reagan was reassuring farmers that receiving government aid didn’t make them like the Black “welfare queens” he invoked as degenerate symbols of liberal dependency. No, these were hardworking men who had hit a temporary obstacle on their path to rugged individualism.

In reality, it was Aid to Families with Dependent Children (AFDC), or “welfare”, that was used by most recipients as a short-term cushion until they found their next job, and farmers who were permanently dependent on government funding, which didn’t stop small farmers — white and Black — from continuing to go under while big agricultural firms gobbled up the subsidies.

Reagan was a master at hitting all the false notes of race and class in the classic American songbook. His “nine most terrifying words” joke flattered the egos of his white country club base (and many more who yearned to join them) who took massive tax breaks and subsidies to be their God-given right while sneering at poor Black people for taking far smaller government “handouts.”

But wait there’s more. Shortly after announcing the new agricultural aid, Reagan urged the Senate to restore aid to the Contra guerilla army — the same Contras who had been introducing crack cocaine into Black neighborhoods in South Central LA while working on the CIA’s payroll to overthrow Nicaragua’s socialist government. 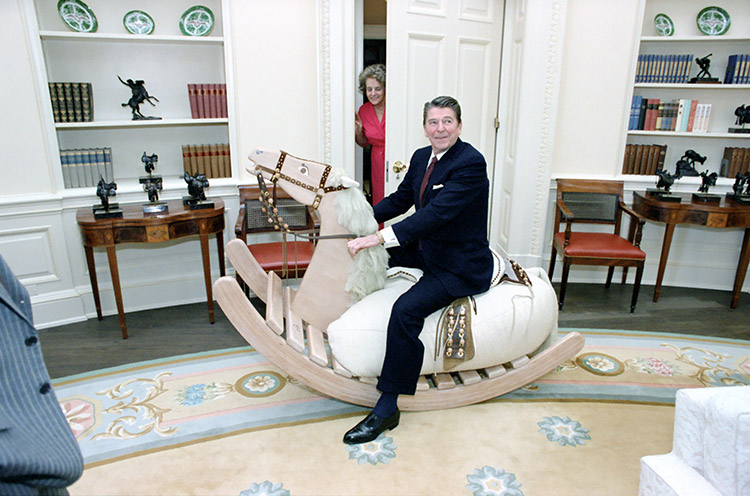 Reagan’s lighthearted quip would curdle for succeeding generations of his followers into a paranoid dogma that saw dark conspiracy theories in the most mundane federal attempts to regulate guns or expand healthcare access. Meanwhile, in the same speech, Reagan lobbied Congress for the brutal paramilitaries who were a part of a secret government program that is perhaps the most outrageous real-life conspiracy in recent American history.

See, it’s a joke that works on so many levels.

Ten years after Reagan’s speech, Bill Clinton disastrously killed AFDC, a historic victory for the long right-wing campaign against government “entitlements.” But rich people’s sense of entitlement would only grow more powerful and self-delusional until, at some point, much of the U.S. ruling class seems to have completely detached itself from the recognition that it depends on a functioning government, which is, of course, how we ended up with the Trump presidency.

Like George Bush Jr. before him, Trump rose by projecting an image of strength through impunity. His power to get away with being supremely ignorant and incompetent inspired followers and rattled opponents. But in the face of challenges that can’t be bluffed away from the table, the White House has been reduced to throwing a catastrophic temper tantrum:

They want schools to open back up and they’re not going to let stupid science stand in the way! They want the economy back the way it was before COVID so people need to get back to work! And no, they don’t want to hear the facts about rising infection rates or the logic that this is wasting all the economic sacrifices people made during the spring!

For business leaders, the problem with Trump hasn’t been his goals but his execution. They backed the push to quickly reopen schools and the economy before seeing how incompetently the White House went about the job. Now many are betting on Joe Biden put a more human face on their inhuman agenda, and while the Biden campaign is currently unveiling a series of progressive proposals that will cause many executives to grumble, the Biden record has four decades worth of evidence to suggest that he will be a safe wager.

As bad as things are, this is also a time of inspiring hope that we are finally on the verge of escaping the nightmare of Reagan’s joke (or is it the joke of Trump’s nightmare?).

In recent years, issue polling and Bernie Sanders’ presidential campaigns have revealed a sea change in sentiment away from the 40-year bipartisan worship of the individual and the market. Polling during the pandemic has shown a continuation of this trend, as strong majorities want the government to prioritize protecting lives over protecting the economy. If that seems like simple common sense, congratulations, you’re a socialist.

But what has made this a moment of rare power and opportunity is the historic Black-led uprising in response to the police murders of George Floyd and Breonna Taylor, the sudden drop in support for police and widespread approval of confrontational Black protests, both of which are as unusual in American history as the recent popularity of socialism. 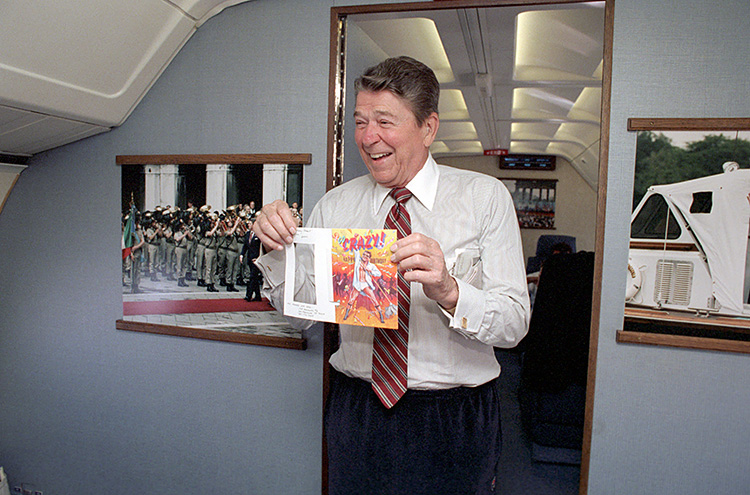 The rebellion has rapidly undercut support for the dark underside of Reaganism’s vision of freedom, a corporate-libertarian ideology that started in Jim Crow Virginia as a reaction to the “tyranny” of federal desegregation efforts — one of the few moments in U.S. history that the government tried to create for Black people the same freedom of movement that it champions for capital.

If the growing U.S. left can find a way to strengthen and fuse these two developments, we have the potential to redefine freedom for generations to come. In recent years, the movement has produced a beautiful slogan, the nine most inspirational words I can think of for all of us trapped in Reagan’s America:

“When Black people get free, we all get free.”