On May 13, City Council passed a bill that caps the amount of delivery, marketing and service fees that GrubHub and other third-party delivery services can charge restaurants per delivery. Commissions have been capped at five percent plus another fifteen percent if restaurants are using the third-party delivery drivers up until 90 days after the statewide lockdown has been lifted.

‘You pay, you work, and then they get the money.’

Restaurant owners have long been calling for a change in the way these services, GrubHub in particular, do business. Even as the city begins to reopen, much of their food orders remain takeout or delivery and the problem has been exacerbated.

“We saw what was happening to our local restaurants, especially in communities like mine, local mom and pop, immigrant-owned restaurants,” he told The Indypendent. “We were seeing these charges that were coming up and how difficult it was for these businesses to pay these high fees.

“Now we move into the era of COVID-19, where we saw the restaurant and hospitality industries just decimated,” he added. “It’s so difficult for so many restaurants just to stay open. We started looking and talking to a lot of the restaurant owners in the area. We saw that it was an incredibly disproportionate amount of money that they were paying to people like GrubHub.”

Before the pandemic, Rafik’s restaurant was a hub for his long-time East Village regulars. You would find them sitting in their respective seats, yelling over tables as they caught up with one another, asking their server to bring over drinks and flitting away the menu, interested only in the chef’s specialties.

Now the restaurant feels skeletal. No more waiters. No bartender to chat up. No wine spills. Just a cook in the back and Rafik sitting at the bar, ready to answer any query the occasional customer may have. The glass display fridge at the front of the restaurant that once housed colorful, detailed cakes is now stocked with premade to-go items, each costing $10. Rafik doesn’t make money on the food boxes but he hopes to keep customers.

Situated next to the display fridge stand a couple of tables with various household necessities for sale like bleach and sponges, effectively blocking off the back of the restaurant. What once was an inviting entrance is now a blockade to reduce the spread of a virus.

Standing in his empty restaurant in PPE, an exasperated Rafik explains his relationship with third-party delivery apps, like GrubHub, UberEats, DoorDash, Caviar and the like. (He asked that we withhold his last name and the name of his restaurant out of fears of retaliation.)

Rafik has owned his restaurant in the East Village for 16 years. He was one of the first people to use Seamless, before they merged with GrubHub. Initially, he made good money with them. They were only charging restaurants 10 percent if they made over $10,000 and three percent if they made less. That felt fair to Rafik, “then things went bad,” he says.

“GrubHub and Seamless merged. You pay, you get business. You don’t pay, you don’t get business. It’s like we’re not even partners. They wanna be partners with you: you pay, you work, and then they get the money.

“They charge you for every order, plus, if somebody calls you directly, and they get the number through GrubHub, they still charge you something. Just for the customer who looked for something on GrubHub and then he called in. They have their way to know who looked and called you and then they charge you. That’s nuts.” 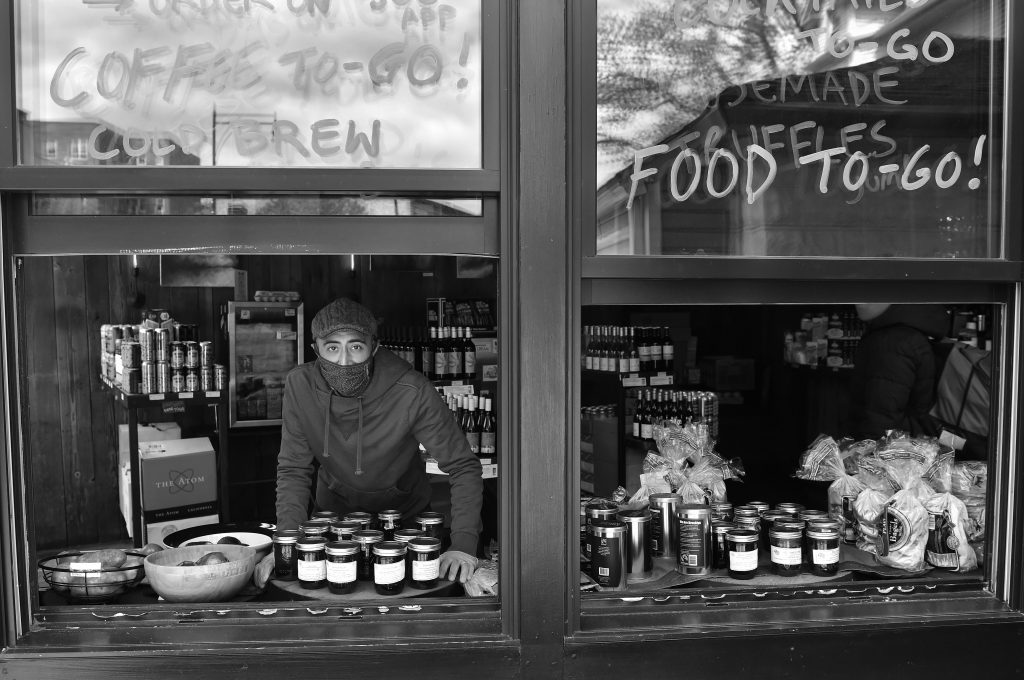 Up until the passage of the bill, Rafik was paying GrubHub 28 percent of the total price of each order made through the app, which is less than other restaurateurs, some of whom paid up to 32 percent. The GrubHub interface presents the user of the app with restaurants that pay the highest fees first.

Taj Singh has owned The Castello Plan in Ditmas Park, Brooklyn for just over a year, when he bought it from its previous owner. “We were hoping to make a lot of money this year to catch up for last year,” he tells The Indypendent. “Coronavirus obviously threw a big curveball,”

Instead, he has had to adapt his business to stay afloat. He sells food and cocktails for take-out and delivery and has converted his restaurant to a small market, where people can buy wine, coffee or bread without having to wait in line at the grocery store.

“GrubHub has their platform, which plays you off against all other restaurants that are on there,” Singh says. “And you end up in this competition in which everyone’s just trying to produce coupons to get interest. People want free delivery, they want coupons, they want it quick”.

“They originally posted this as some great scheme for restaurants but I found out afterward that I had paid for it,” Singh says. “You take $10 off, plus they take 32 percent. It costs me 30 percent to make it. So I make eight percent. They’re making a crazy amount of money while we spin our wheels.”

He no longer participates in the program but, like many small neighborhood restaurateurs that want to sever ties with GrubHub, he feels forced to continue to do business with them in order to keep the customers that find him through the app. 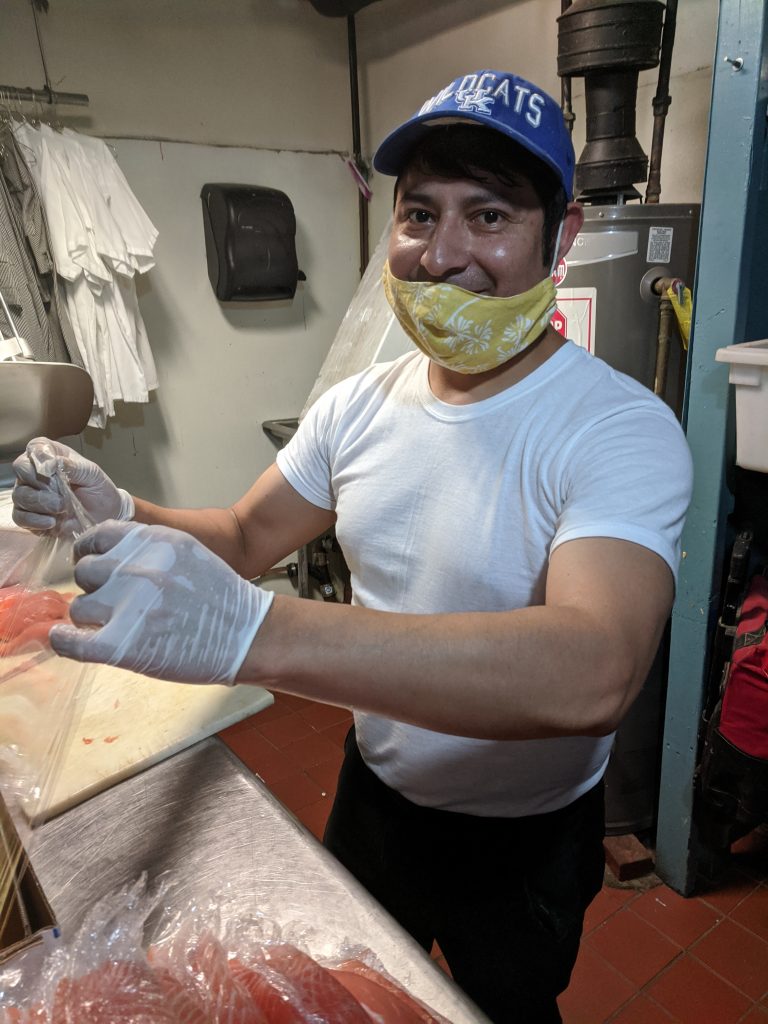 Eduardo Peña Fiel, owner of Trufa Restaurant, offers customers a 10 percent discount who order from his app instead of going through third parties like GrubHub. Photo: John Tarleton.

“I’m actively doing everything I can to get my customers off GrubHub,” says Singh. He puts a card in every to-go bag that GrubHub delivers, asking the customer to order directly from Castello Plan. He hopes to encourage enough migration away from GrubHub to not use the service. Still, they do try to offset third parties as much as possible.

At Trufa Restaurant in Hamilton Heights, owner Eduardo Peña Fiel, paid $3,000 last year to a customer who designed an app for customers to use to order directly from his eatery and receive a 10 percent discount. He now has 1,200 customers signed up and uses the data to promote specials he’s offering. Yet he welcomes the new caps, as GrubHub still accounts for 60 percent of his business.

“It’s not too easy to compete with them,” he said.

The restaurant owners The Indy spoke with said that they are happy to pay GrubHub the delivery fee, which they believe the deliverers well deserve, but they would still prefer to cut out third-parties. “It’s better if my guy does the delivery, then he gets the tip,” explains Rafik.

Rafik is glad the city passed the fee-capping bill but he still thinks they could have done better and misses the old fee system. “Honestly, 10 percent for $10,000, like they did at the beginning, that’s much better.”

In response to the bill, a GrubHub spokesperson released this statement:

Any arbitrary cap — regardless of the duration — will lower order volume to locally-owned restaurants, increase costs for small business owners, and raise costs on customers. Delivery workers would have fewer work opportunities and lower earnings. We also believe that any cap on fees represents an overstep by local officials and will not withstand a legal challenge.

“They’re still going to make a lot of money,” he says of Grubhub. “It’s a platform that just exists. It already works. It’s not going to affect the maintenance of their platform. They’re already so, so big. They’re staggeringly big.”

GrubHub’s stock value has been on the rise since the pandemic hit the United States. In early May, UberEats  made an offer to buy the company out, which would have made it the largest food delivery service in the U.S., owning 50 percent of the delivery market and a monopoly-like power to charge higher fees. The deal did not go through and they have now offered to buy Postmates, which would also give Uber a larger share of the market.

Meanwhile, small businesses that are experiencing major losses due to the pandemic are scrambling to stay alive. Many will likely not reopen after the crisis. The fee cap imposed by the City Council will only last 90 days after the ongoing state of emergency is lifted. The City Council should instate fee protections on a permanent basis, restaurant owners argue. In the meantime, it will be up to customers to directly support the restaurants that feed them, to get to know the establishments and have human interactions with their staff.

John Tarleton contributed to this article.